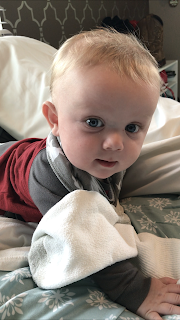 People must not believe me, but he really is the best baby! He's an adorable ball of chunk who loves everyone and everything and is 9 months old now! 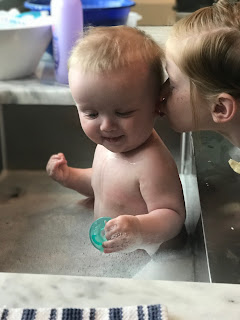 He's had his first haircut and I did a terrible job since he wouldn't sit still. His hair isn't really red. Maybe it has small highlights in it, but it's mostly a blonde color. 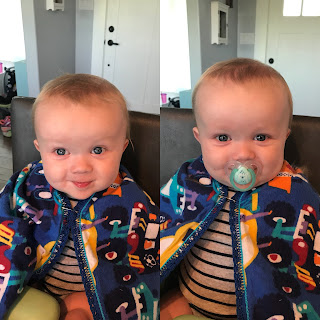 Logan is huge. He weighs 20lbs and is really long. He's also got a pretty large melon on his shoulders and because of that, he's "delayed" in some milestones because it takes him longer to learn how to balance all that weight whenever he moves around. 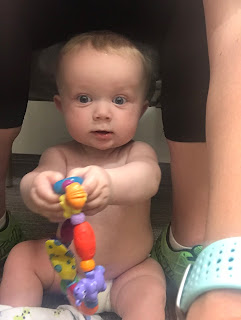 At this age both girls were crawling and pulling themselves up to things and cruising around furniture. Logan isn't even close. He's so freaking chill he doesn't really have a desire to move around yet. As long as he can see what's going on, he sits back and laughs and just enjoys the moment. 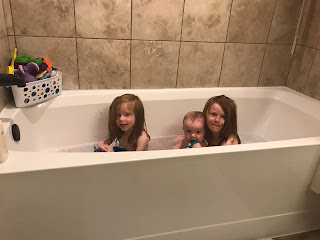 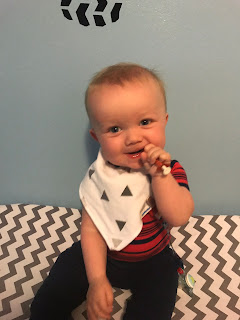 The only time he's been a problem is when he's been sick (he recently had hand, foot and mouth and that was awful) or when he's cutting teeth. His pain threshold must not be very high. He has popped out two bottom teeth as of this morning though so hopefully the top ones will give him a break for a bit. How is it fair that teething is miserable when we're babies but when we get older teeth come in all the time without any trouble? I'll add that to the list of questions I have for a certain Man in Heaven when I meet him. *wink* 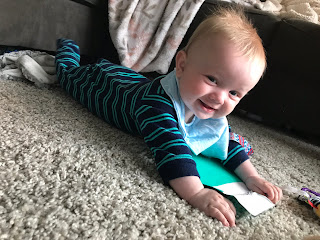 I used the word "delayed" in parenthesis earlier because he's technically not delayed or a concern, just much slower than his sisters. We took him to a follow-up physical therapy appointment for his torticollis and had them check him out and the therapists say he's totally fine. Cognitively he's super attentive and soaks things in. He just doesn't want to move. He hates being on his stomach for more than 3-5 minutes even now, so I wonder if he won't even learn to crawl; he'll just skip it and walk eventually.

But, fun facts of Logan:
* In 9 month clothes
* size 3 (soon to be 4) diapers
* claps
* has said both mama and dada, but not in context
* has the BEST laugh in the world
* usually sleeps really well at night unless he's in pain for some reason. totally understandable
* Loves solid foods and is finally used to chunky things
* just sits and chills wherever he is and soaks in the world around him
* has a special smile for Kennedy