Freaking A! What A Week!!

So Kennedy's tooth ended up not being the issue. I mentioned she was sick, but she ended up getting really sick. She had a fever for 6 days and white puss on her tonsils in her throat. Her voice was labored cause her throat hurt so bad and she was MISERABLE!!!! Once we noticed the white stuff in her mouth we went to instacare cause we were certain it was strep. 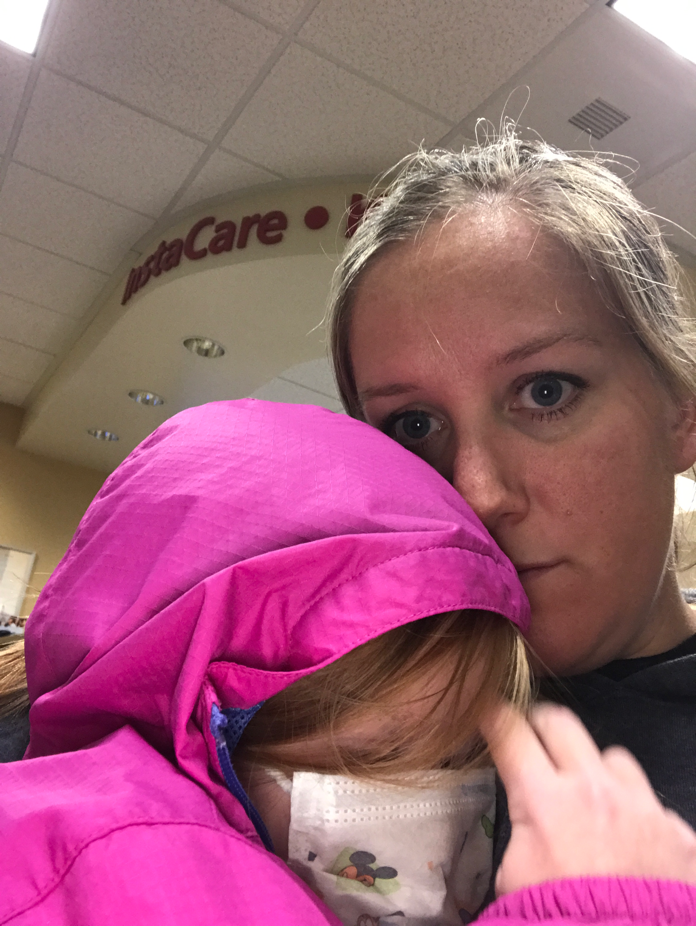 And we were wrong. But man, what a bug! She missed 3 whole days of school before her fever broke and she started to feel well enough to go. Thankfully no one else got it. But taking care of her and everyone else totally wore me out. 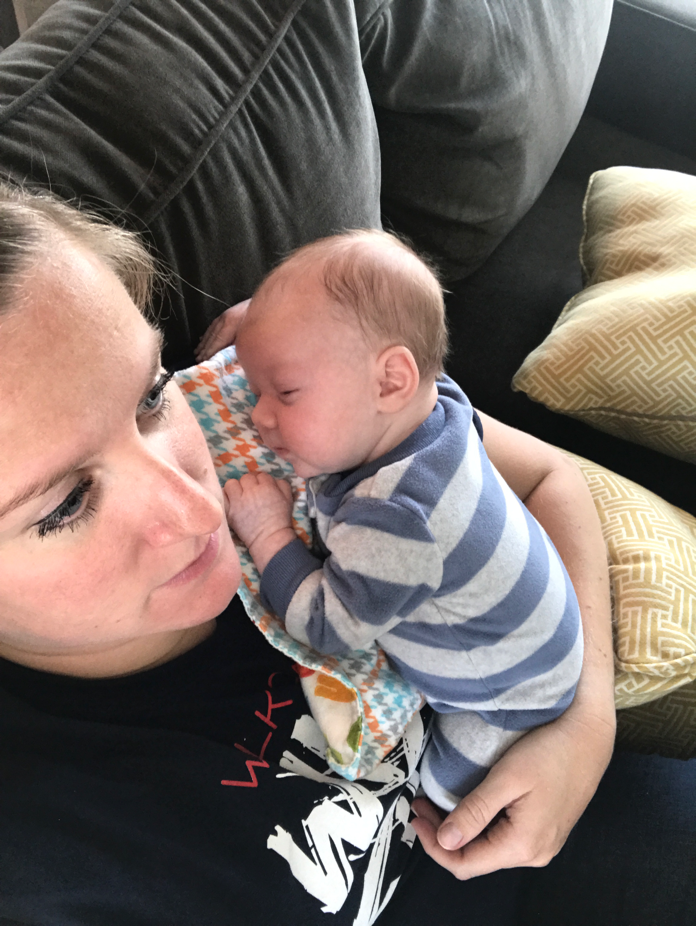 I was so stinking worried about Logan catching it. The idiot doctor at instacare told me to keep Kennedy and Logan in separate rooms (because as she says "it's easy to just stick a baby in another room alone") and to wash my hands and change my clothes every time I switch between the two. Ha! This woman obviously never had kids. Kennedy also had a fever of 102 when we went in WITH ibuprofen in her system and she said that fever was so mild I shouldn't even bother taking her temperature. She was nuts!!! Luckily, he escaped without getting anything but a big booger in his nose one night. 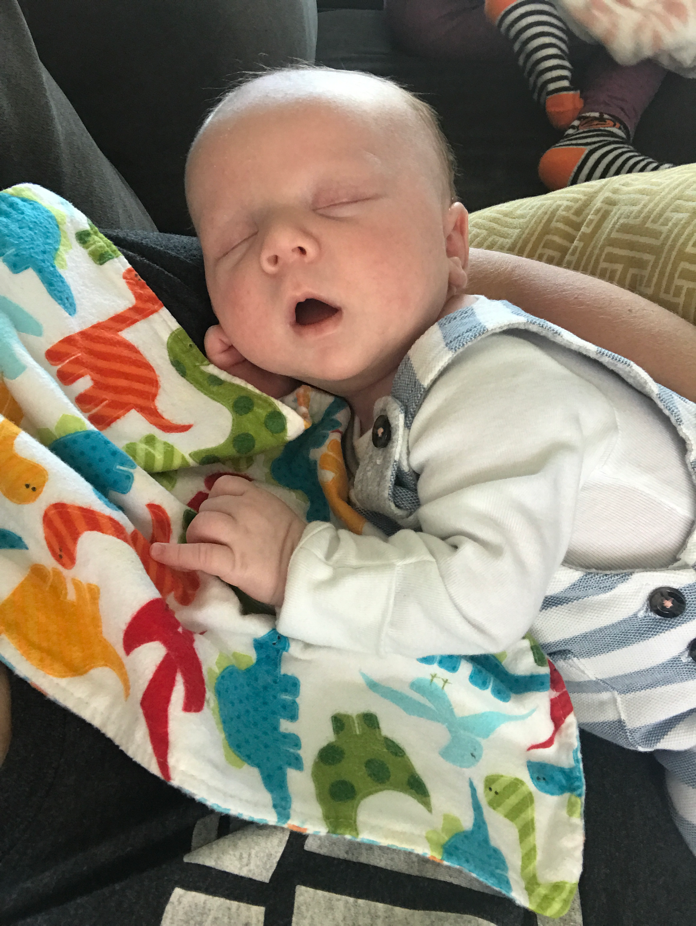 And he's still such a good baby and chunking up nicely. And he's my cute little boyfriend and cuddle buddy. 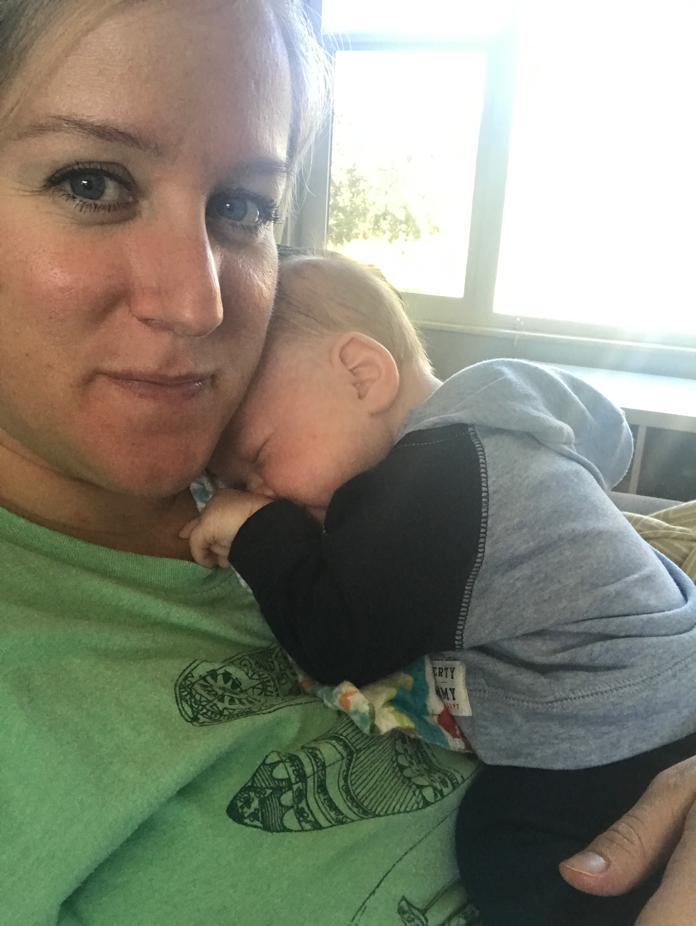 He does have a bad habit of waking up at 6:30-7ish, which isn't a bad thing except for on weekends when I wanna sleep in. So the last two mornings he's been my bed companion while I get a few extra zzzz's. And he poops a TON!! Like, a ridiculous amount. So this onesie suits him perfectly. 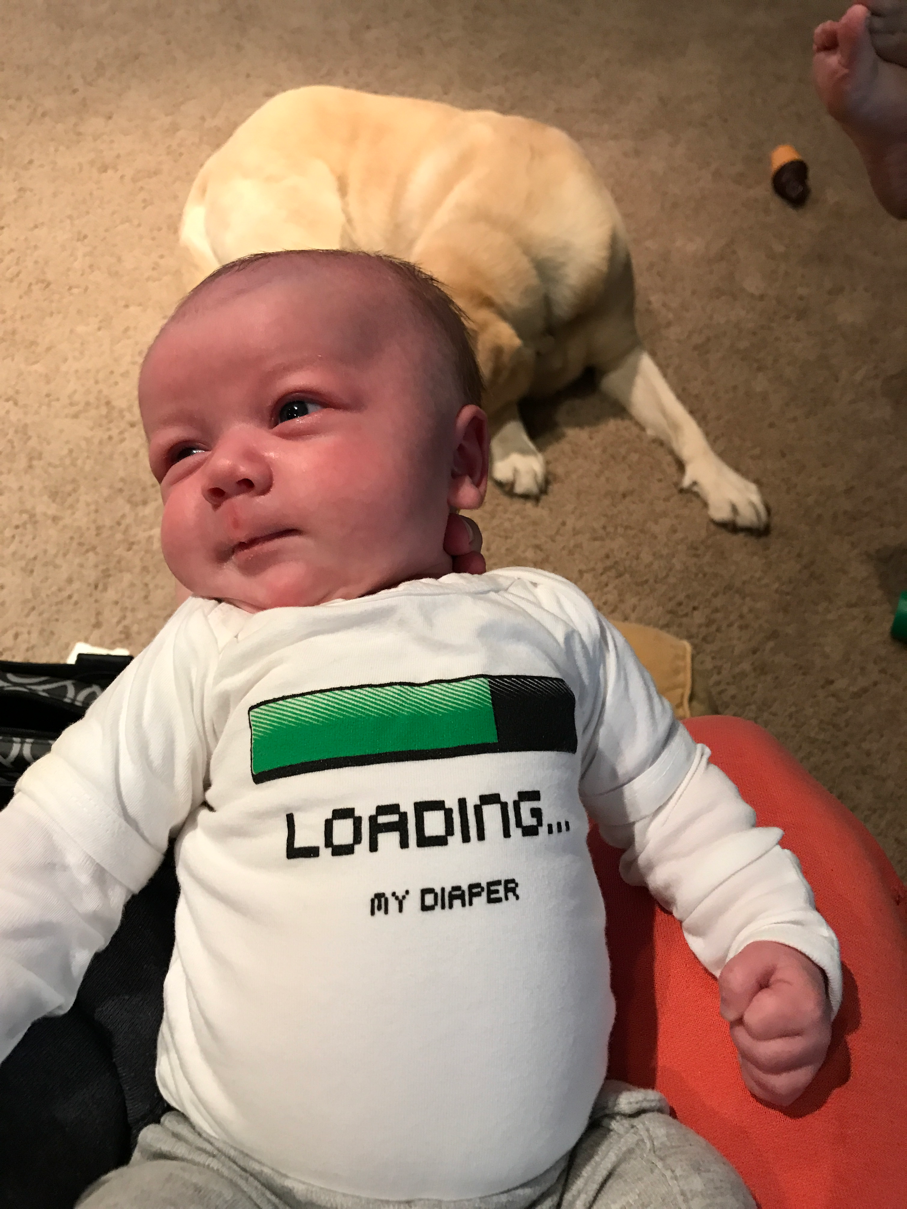 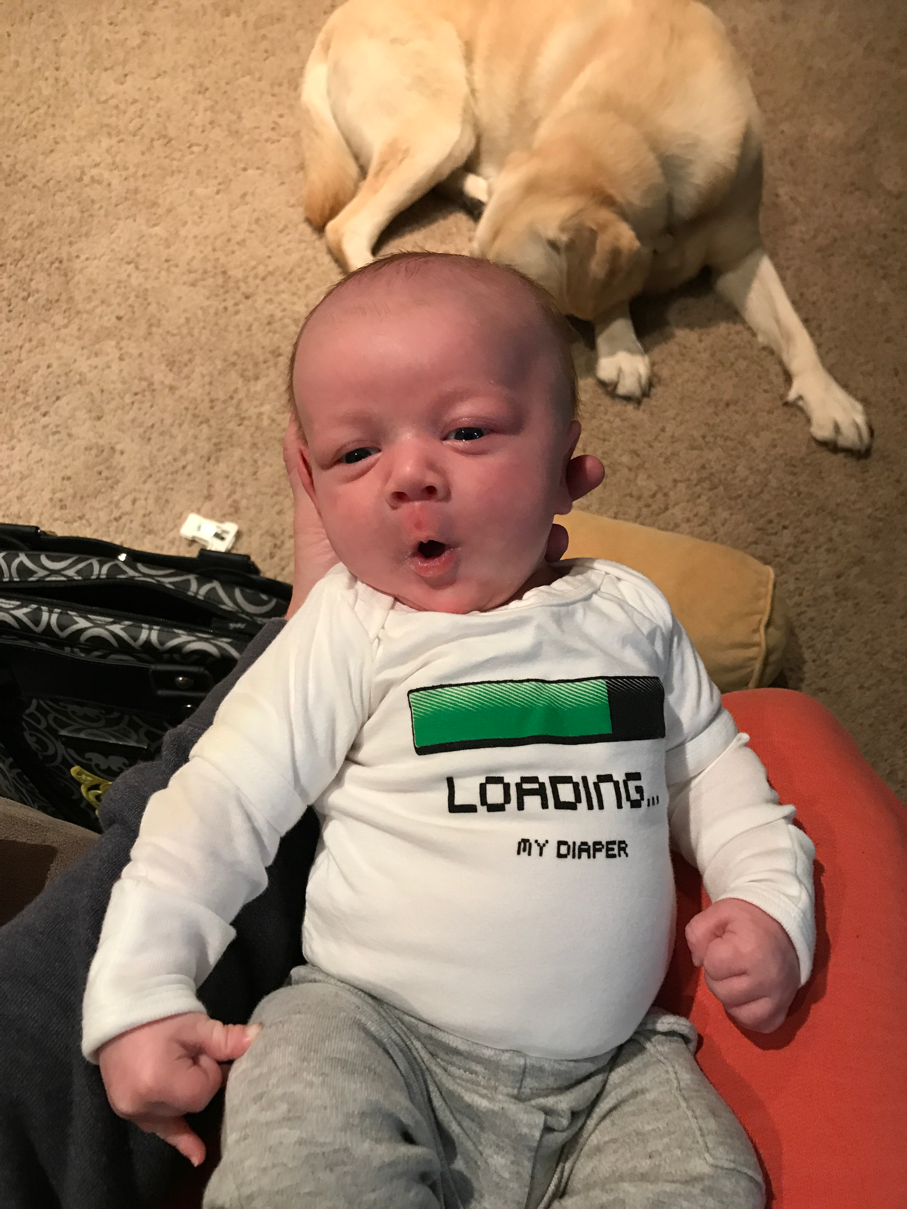 He's also recently started smiling!!! Oh man it melts my heart! I haven't been able to capture it on camera yet but I've come close. 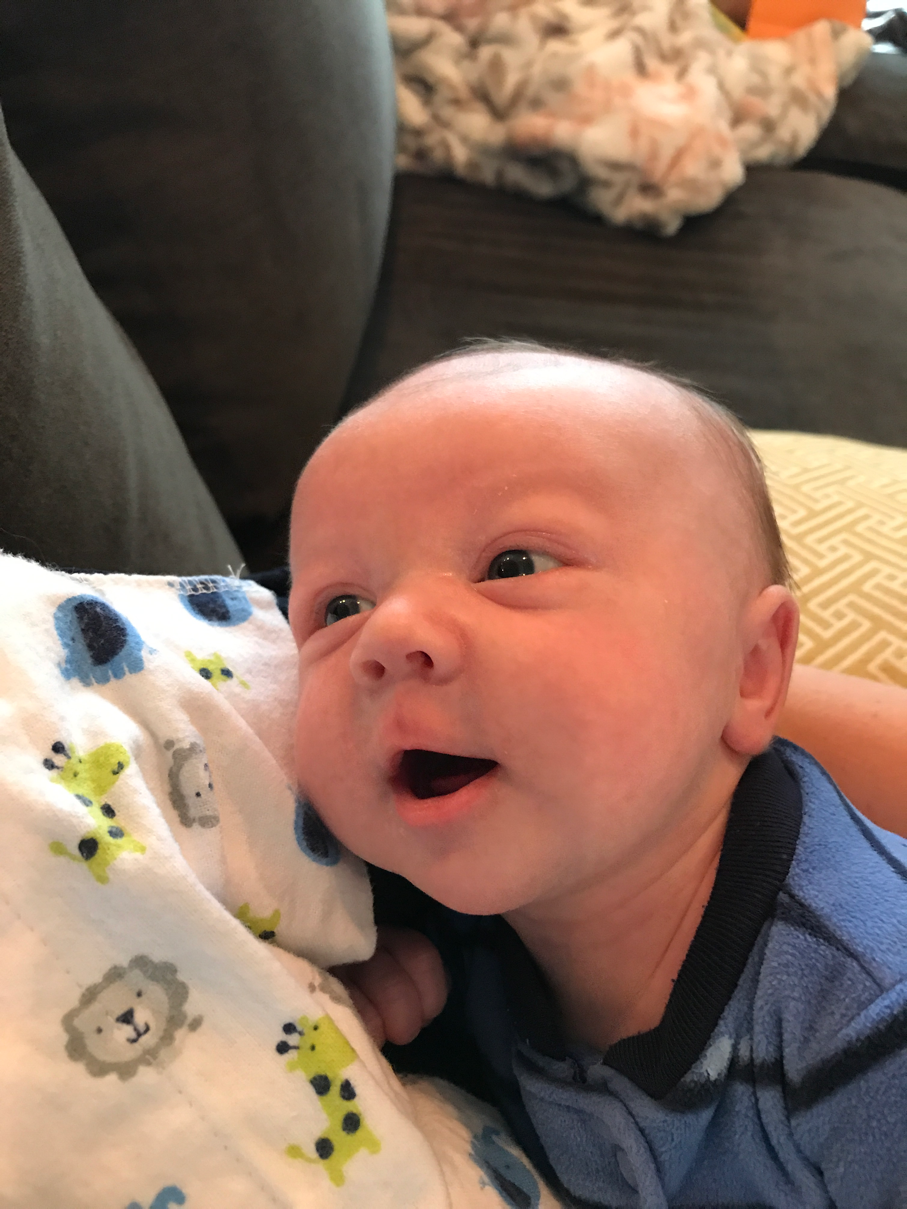 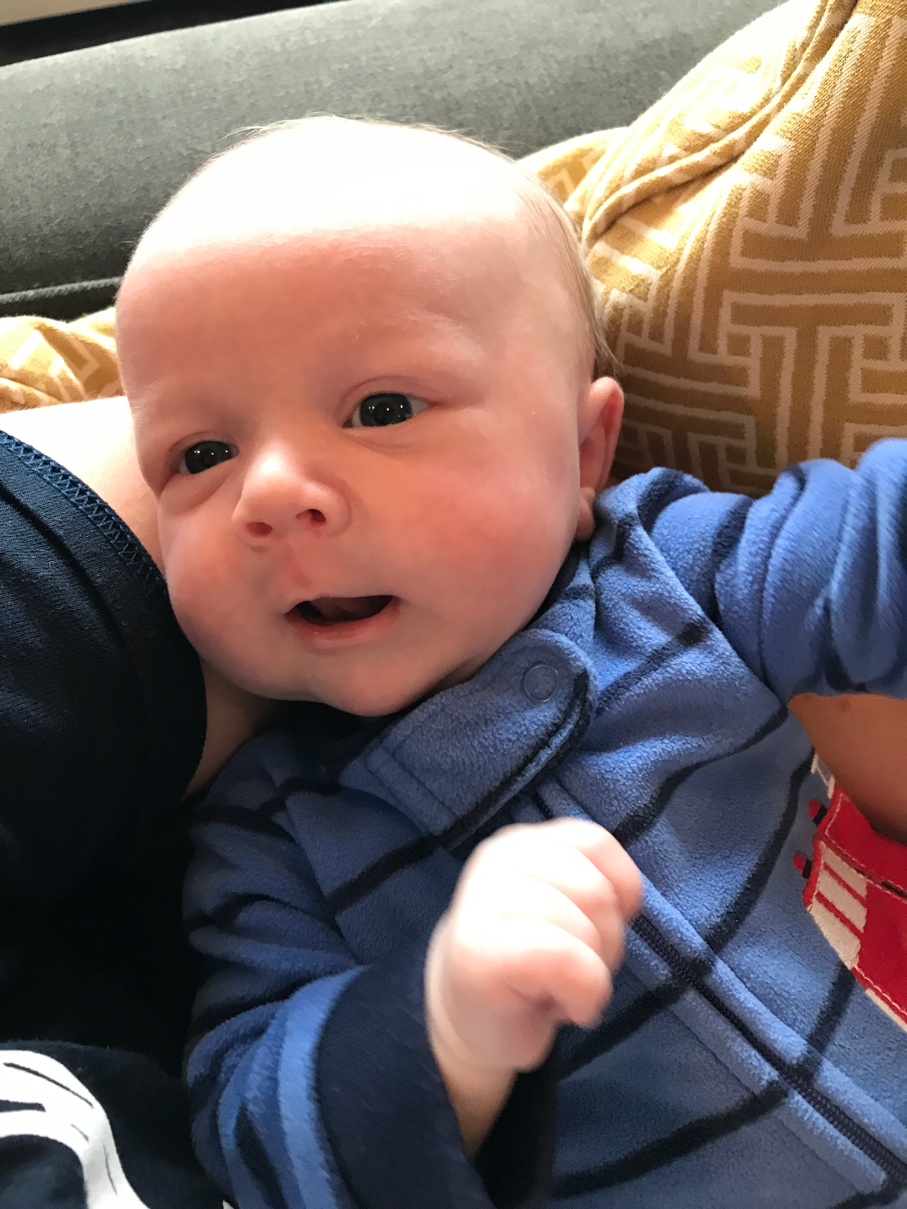 He's such a stud. He eats a lot; every 3 hours. But he goes longer than that at night thank heavens. He's still in newborn size clothes but they're starting to get tight, so I think he'll move up soon. He's also in size 1 diapers - diapers that we change all the time cause he poops so much - and currently eating about 3.5oz of formula per feeding. And he is so adored by Kennedy. It killed her to not touch him when she was sick. 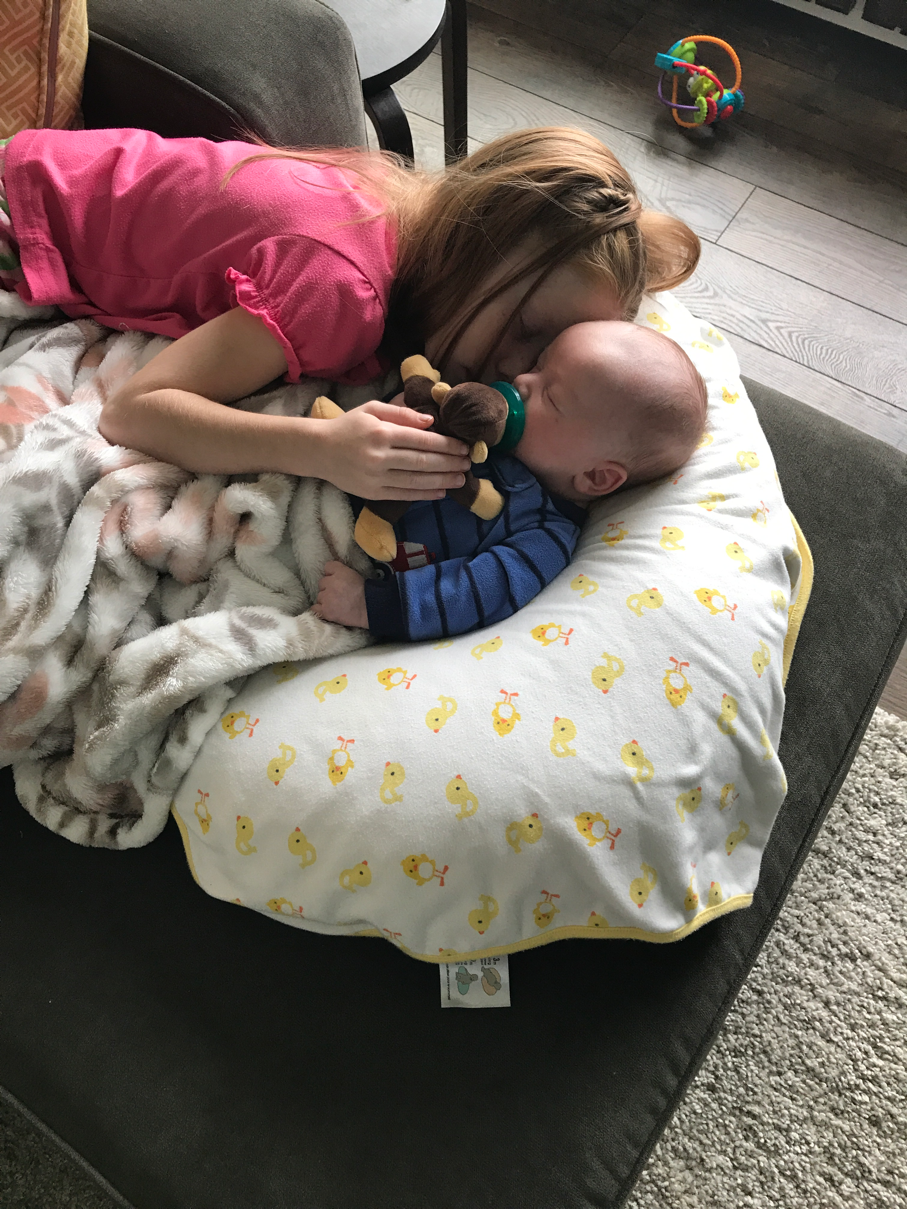 We did find out that he needs physical therapy. The muscles on the left side of his neck are super tight and the ones on the right side are really weak, so his head is always being pulled to his right side. Since his bones in his skull are still so loose, it's making his head lopsided :(. So we take him in next week to see how we can work with him and hopefully fix it.
Also, he will be 6 weeks tomorrow. How did that happen already?!
This weekend was General Conference!! It's seriously my favorite weekend twice a year. I love listening to the uplifting messages and getting spiritually fed while in my pj's. And eating frozen custard for lunch. 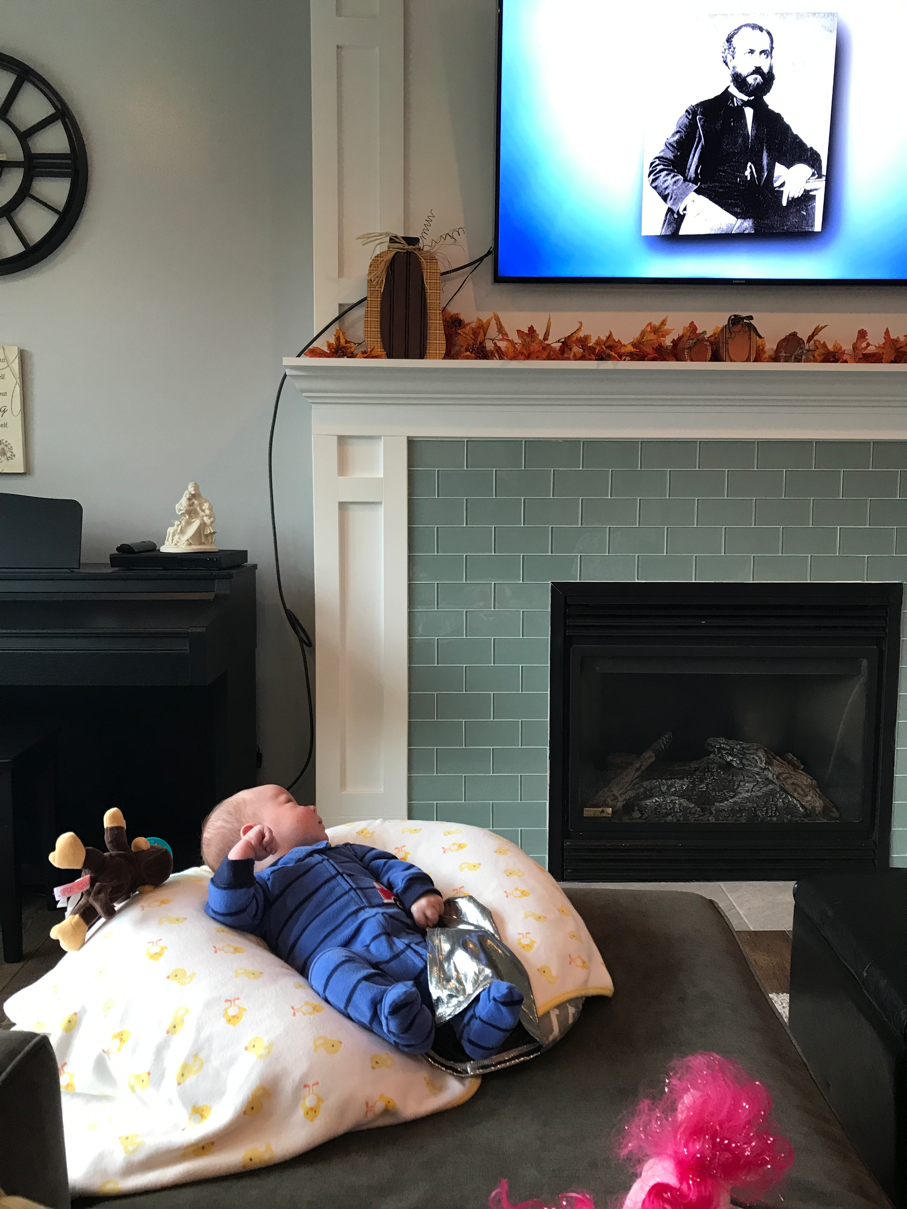 Actually in all seriousness, this is the first time Kennedy has stuck around for the sessions. She cuddled with me all day and I'm hoping her ears were listening enough to catch a thing or two. But I loved having her by my side. Also, I'm so jealous of her eyelashes. Brynlie played with her toys while I watched; usually too loudly because she wanted attention. She's really been struggling lately. She's been acting out and picking fights just so she can have the attention on her all the time. It's been really frustrating, but we'll get through it. 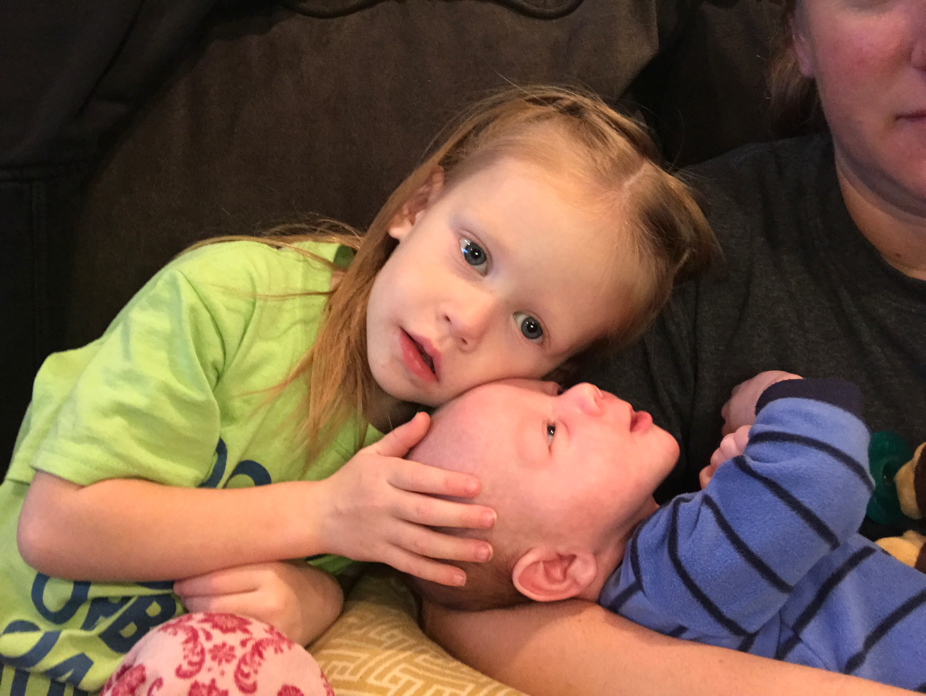 We made Conference pancakes this morning. Now that I'm not a walking zombie (as much) anymore, I need to get serious about counting my macros again and getting my nutrition dialed in. I've heard everyone raving about the different flavors of the Kodiak Power Cakes, so I picked some up at Target yesterday. This morning we tried the dark chocolate and they were really, really good!!! The girls loved them! 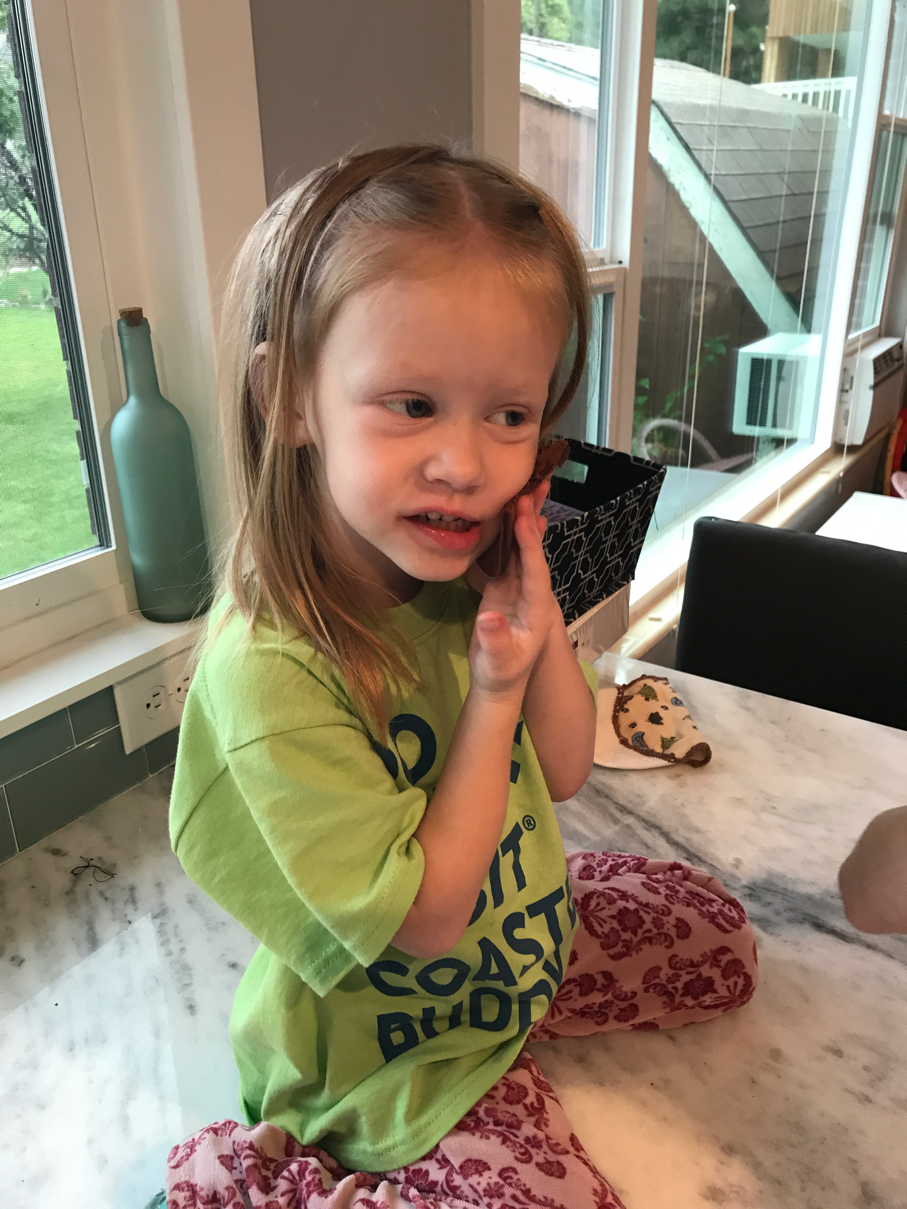 And I got another affirmation of how much I love my griddle. 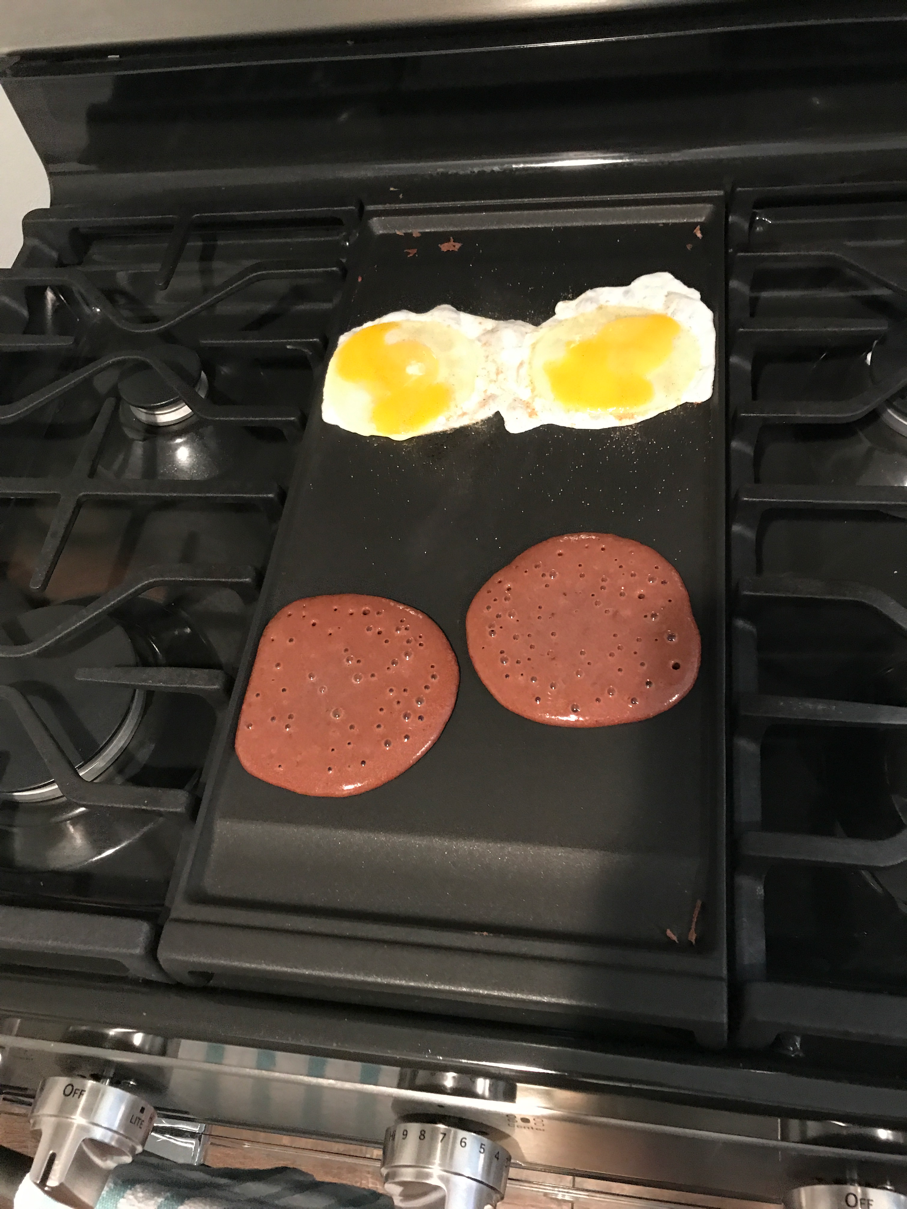 4 pancakes and two eggs later, I had a protein packed breakfast. Bam! 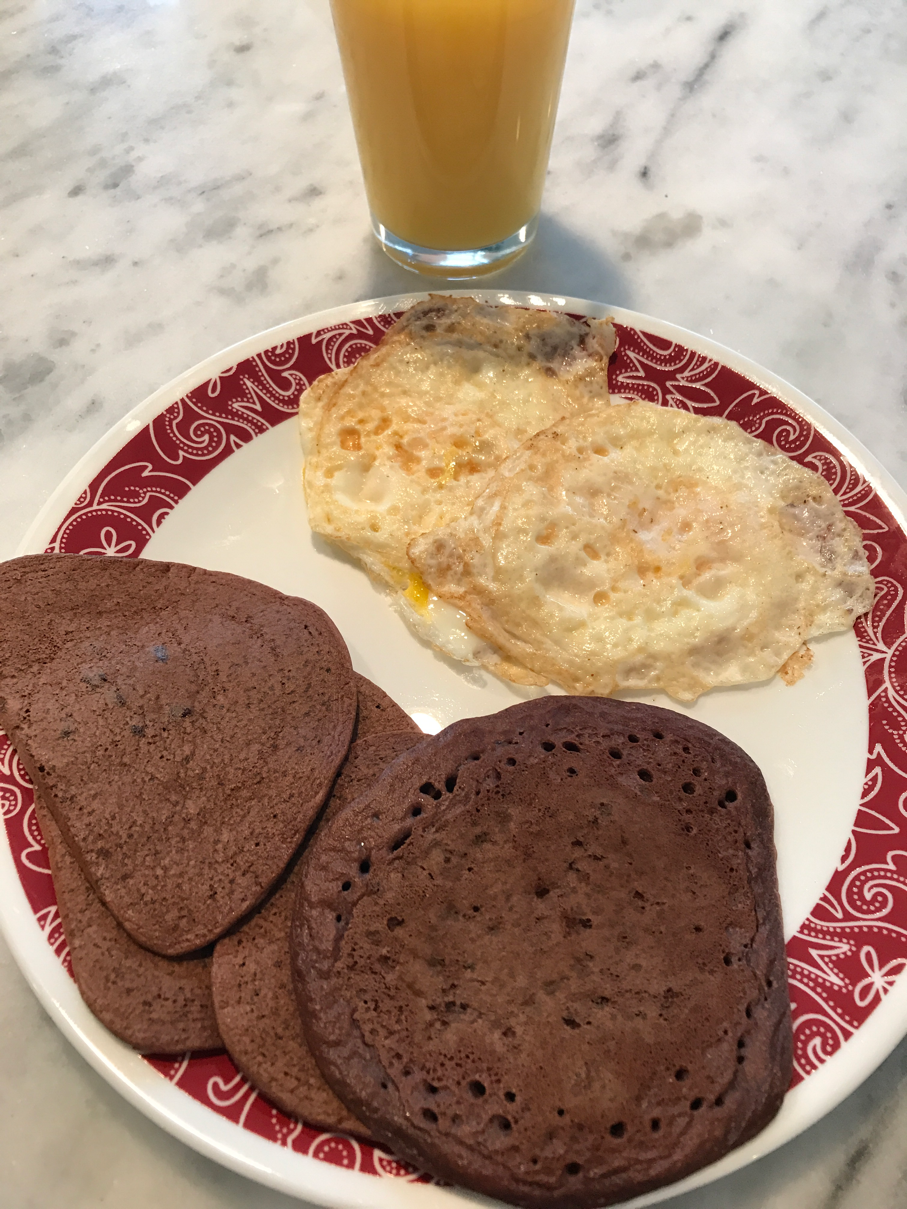 With my 6 week postpartum clearance coming up tomorrow and getting more serious about the fitness aspect of my life, that means my blog will once again go back to having some posts about it all as I slowly work to get my body back after baby. I have a lot of work ahead of me, especially in the running department, but I'm ready to work. Bring it!!
See you soon.
Posted by Megan and Cory at 7:15 PM

Please tell me you didn't see Dr Smith at the instacare in bountiful? She's HORRIBLE and has misdiagnosed my kids twice. I will never see her again.