Hello, again!
It's been a rough week. Well... the first part was pretty rough. Last Monday Cory picked up an extra shift and was gone the whole day. That was the day our car died. He spent the entire day on Tuesday fixing it, so he was basically gone the whole day again. Wednesday afternoon he started night shifts (something I've been dreading since we found out we were pregnant) and the whole morning was MIA again mowing the lawn and doing all the stuff he planned to do Tuesday. So I had already started his 4 days of nights being alone for 3 days earlier than I had planned on. By the time he was ready to go, I was a sobbing mess. My hormones were still out of control and I was petrified!!
I won't lie, it was rough. I was so freaking lonely and exhausted. I've never had to take care of 3 kids all alone before, much less being the only one getting up to feed him at night. Props to you nursing moms. I have zero idea how you survive. Literally. I also started to view our house as an insane asylum. If I had to spend another minute there alone I was going to die.
Friday morning I went to the gym and did a light, 20 minutes worth of a workout. I actually felt super great!! I was doing exercises it took months to be able to do after I had Brynlie because of ligament pain. So that helped boost my mood.
My parents were heading to Hyrum Reservoir for the weekend to camp and since I was going crazy at home, I decided to haul all three kids up there alone and join them for the weekend. If I was already doing everything on my own, I might as well be getting out and letting the girls have some fun, too. I thought maybe I was totally crazy for thinking it was a good idea. But it turns out, it was just what the doctor ordered. There's very little Kennedy loves more than camping. And staying in Grandma's trailer was just an added bonus. And a HUGE thank you to my mom for putting up with us and helping me. Seriously. I don't think she realizes how much she saved us. 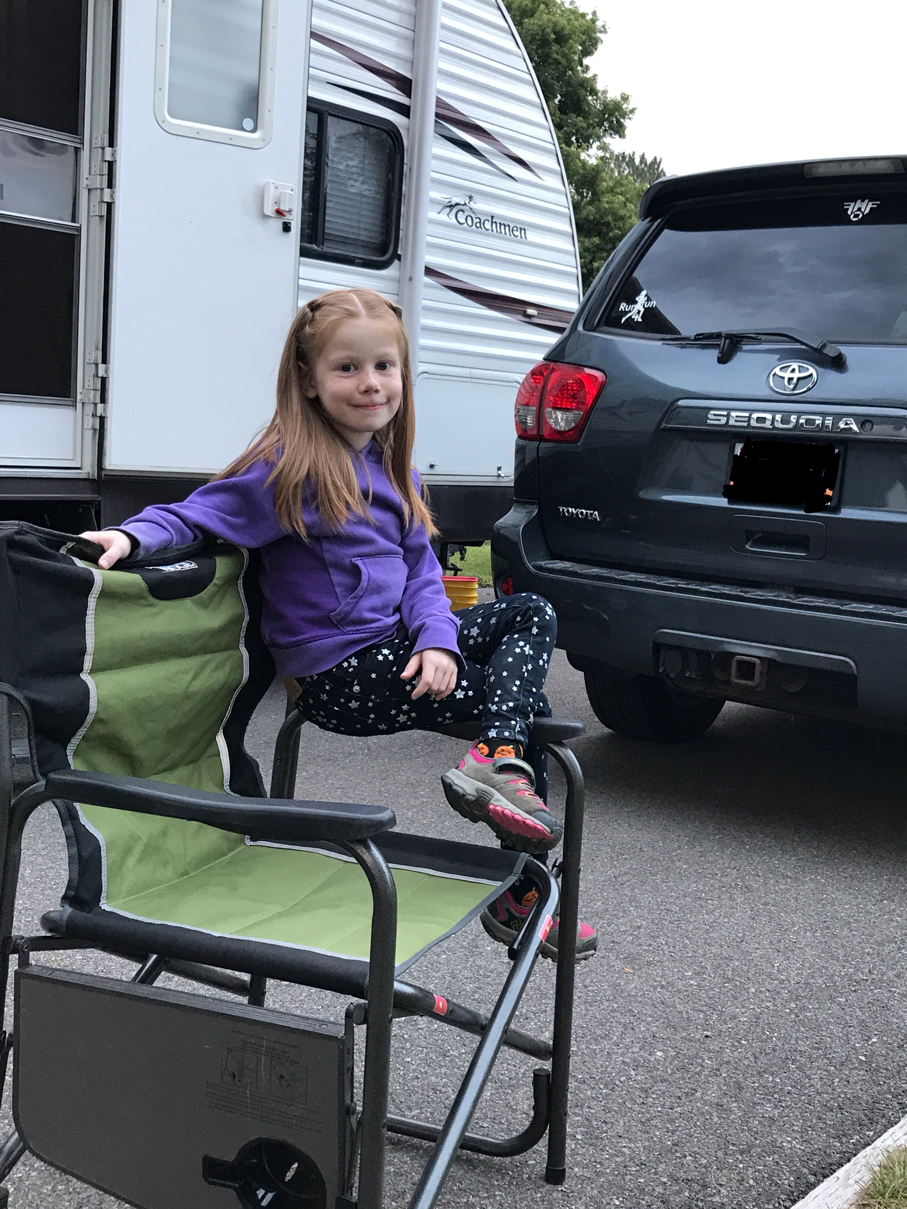 Logan was a natural camper. Even in the cold and rain. He seriously was sooooo good. Maybe he needed to get out of the house, too?
Saturday the weather was perfect fall weather. We went to the Willow Park Zoo in Logan and had a lot of fun. 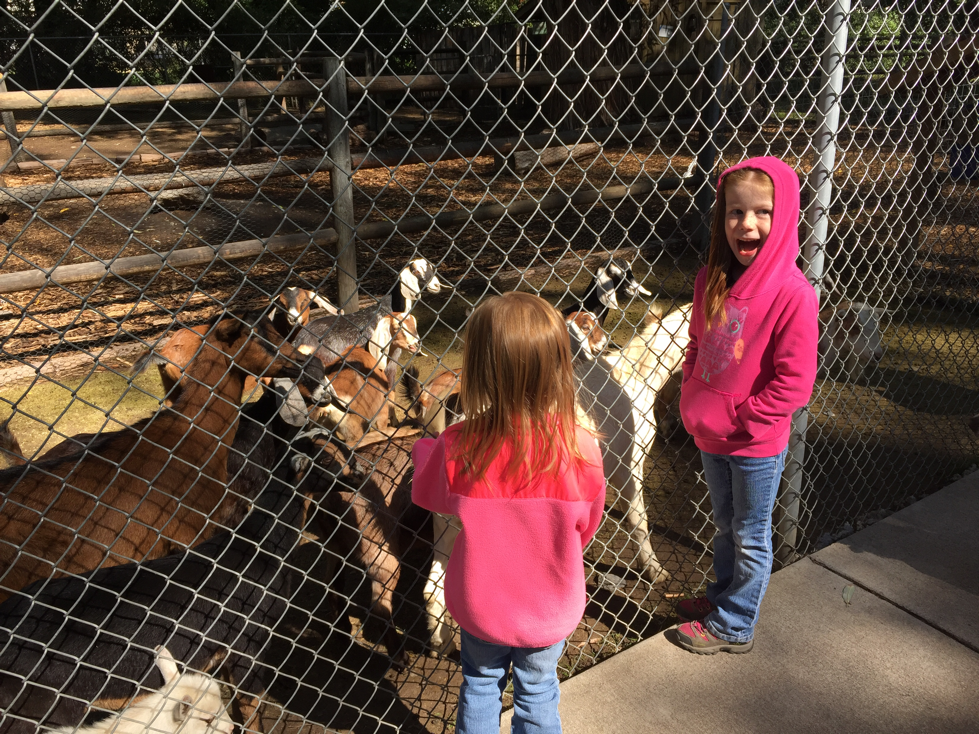 The petting zoo wasn't open, but thanks to my Dad's buddy, Tommy, all the goats came over anyway so the girls could pet them while they investigated the animal that was somehow not caged up. This made Kennedy's day. 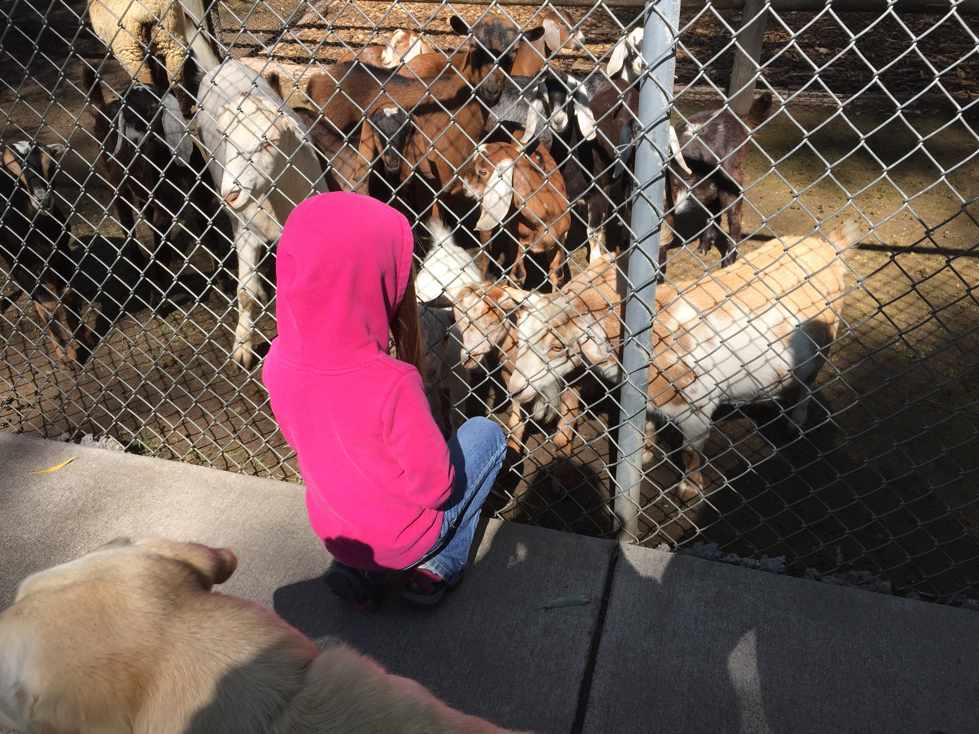 They had a super random assortment of animals, but it was a lot of fun for the cheap admission price. And a worker even brought out a reindeer the kids got to pet!! 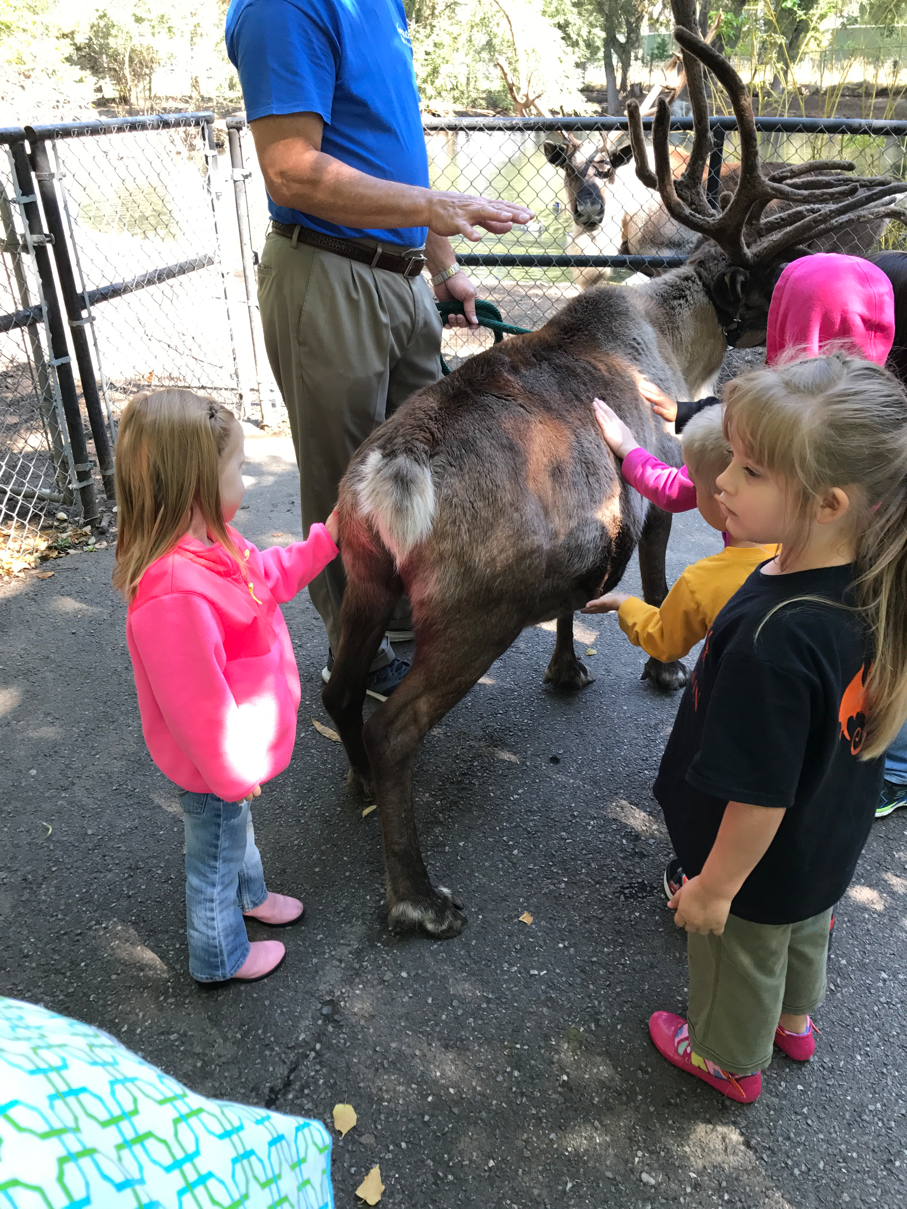 After the zoo we had lunch at the Blue Bird (so good!!) then headed back to camp for naps and games. 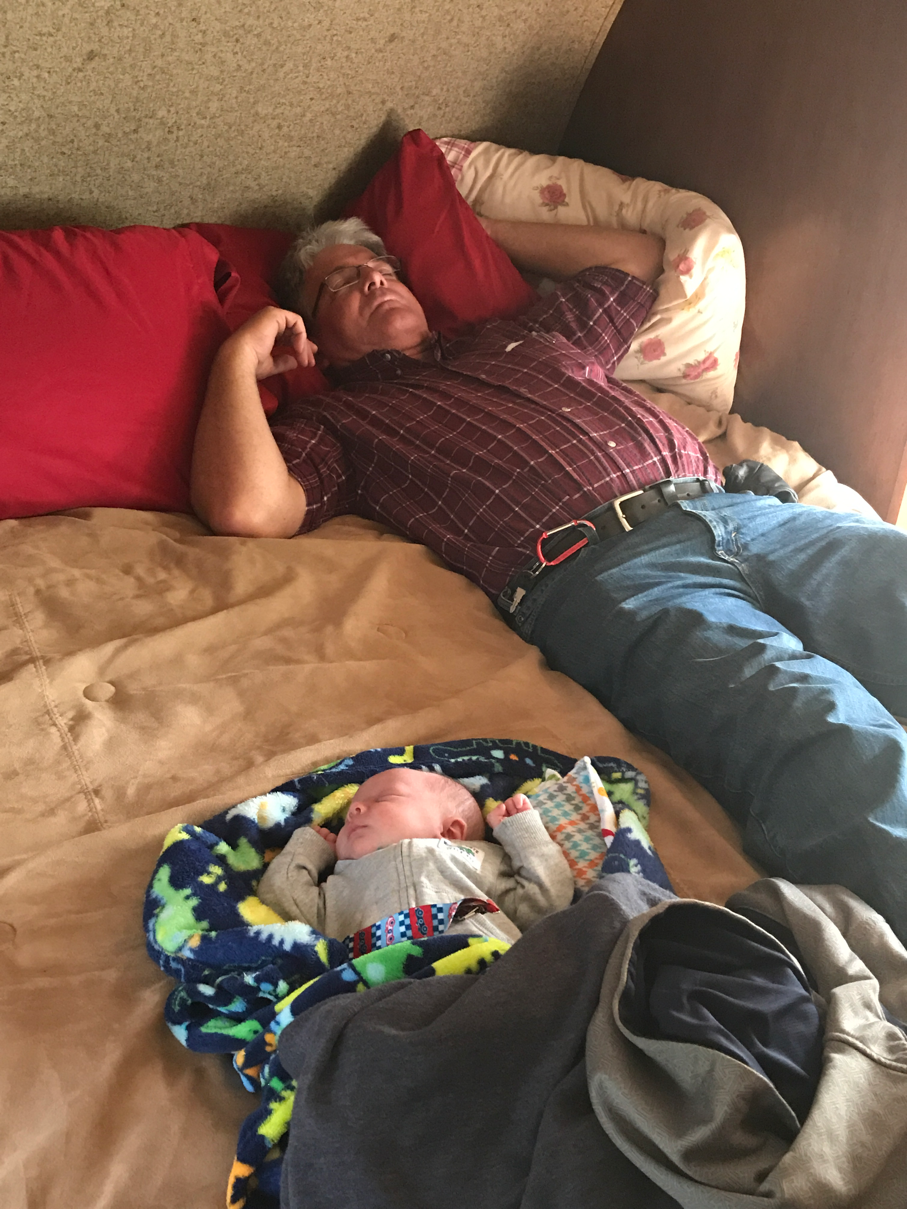 The rest of the time was spent taking short drives and just hanging out, which was tons of fun and relaxing.
I'm not sure if it was getting away or if my hormones are finally settling down, but ever since then I've been MUCH better. I'm super tired, but I'm not crying all the time and having tons of extreme anxiety anymore. *knock on wood*. I'm thinking I can handle this "single parent" stuff as it comes up when the hubs is working. Man, babies are tough!! 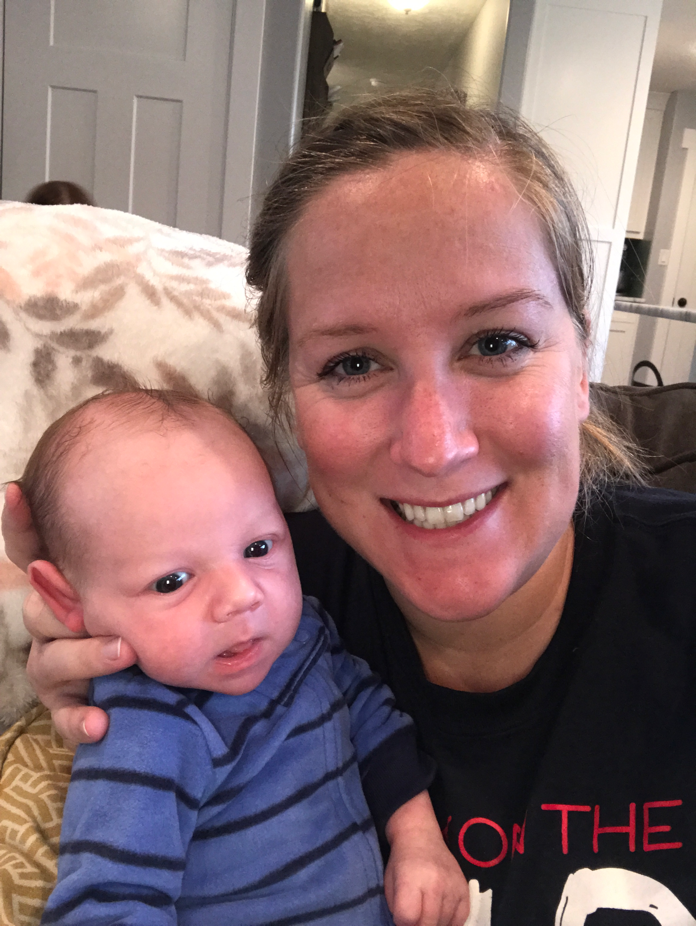 I started going back to the gym yesterday and I was even able to run a little!! Ah!! But this morning I woke up not feeling super hot, so I've been downing the emergence-c and tea like crazy and just rested because I can't handle doing this while being sick. Not yet, anyway. Unless someone wants to come be my nanny. For free haha. So let's hope it doesn't turn into anything serious.
I keep bringing up the hard parts of this because I want people to know they aren't alone and it's ok to talk about the times when life kinda sucks. Sure babies are sweet and completely steal your heart, but they are no walk in the park. Sometimes I wanna shout that from the rooftops.
But at the same time, they're worth every single moment. And not all moments are hard. I'm so grateful for my blessing to be a mother and to have three sweet spirits who call me Mom.
See you soon.
Posted by Megan and Cory at 5:28 PM

Congratulations to you and your husband. So happy for you! Your photos look so cute, everyone looks great. Just started follwoing you and already loving it