The Nursery and Stuff

37.5 weeks you guys. The longest pregnancy in human history is coming to an end. Not today, not tomorrow, not even next week... but some damn day it'll be over with. 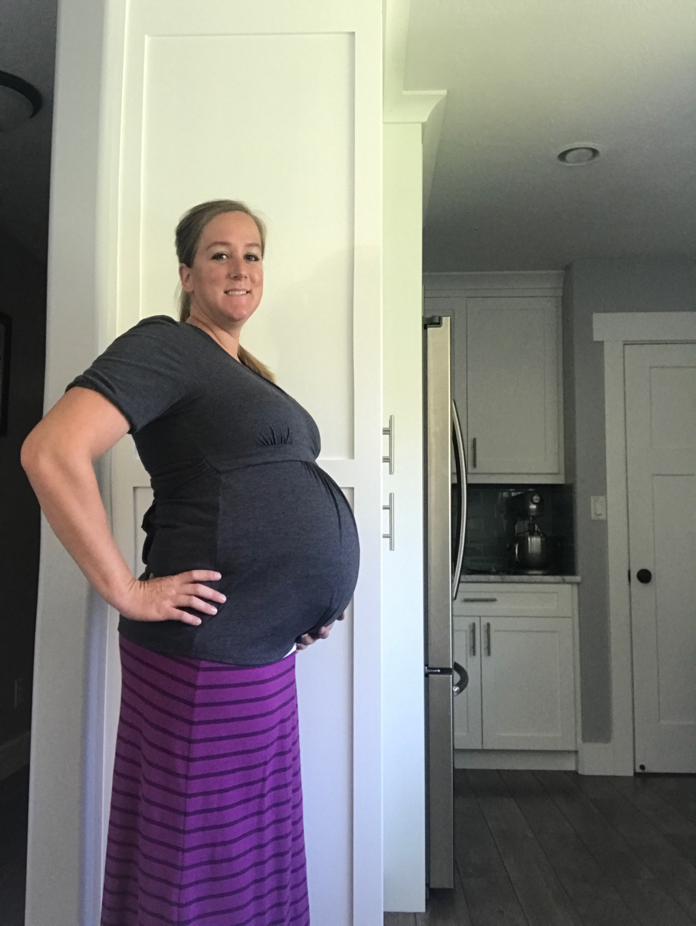 I'm predicting by the time he decides to come he'll be in the 8lb range by the looks of things (aka, the looks of me). That is one massive belly! He's not showing many signs of wanting to grace us with his presence which makes me want to throat-punch someone. But someday this will all be worth it. To all you lucky people having 5-6lb babies; I hate you.
But he has a finished nursery to come home to!
Let me start by saying this did not turn out how I visioned it. At all. When I decided on a Jeep theme I knew I wanted to make it more Jeep/Moab themed. First, Jeep fabric is kinda hard to find. Second, Moab anything is pretty much impossible to find. I had envisioned the walls being a redrock red, not blue, and a big Delicate Arch either on the crib quilt or painted on the wall. But those ideas fell through. When my mom showed me the quilt she was making, I decided I had better go in a different direction and match that instead. Unfortunately I had already ordered some fabric to match my original idea, so not everything matches. But we made do, and it still turned out alright.
Walking into the room: 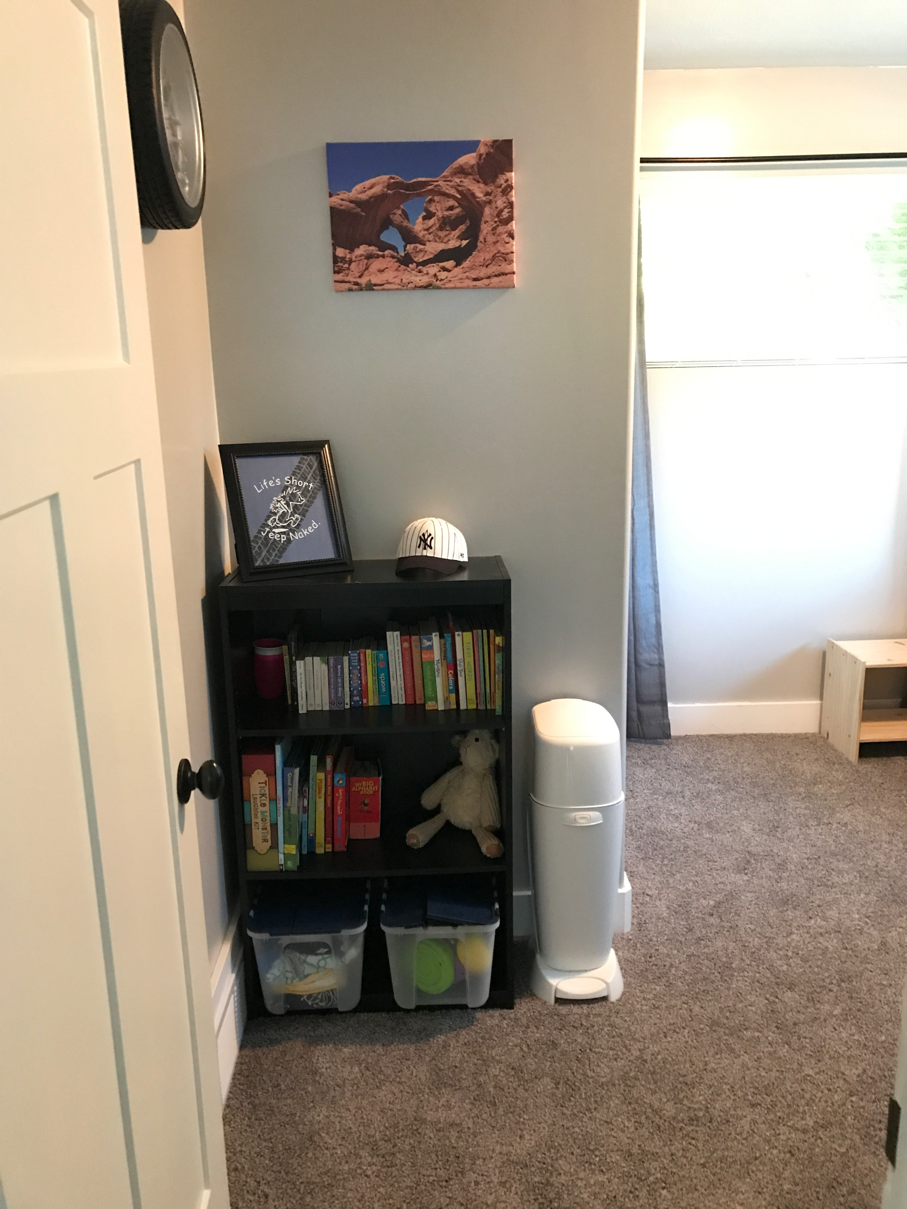 I found a killer deal on canvas portraits on Groupon so I ordered a few of our favorite Moab/Jeeping pictures to hang around the room. You can't tell because of the glare but the clock is a tire and the hands are tools. I also ordered that Yankees hat for newborn pictures. The site said it was infant size... not even close. Brynlie can wear it and she's 3. So he will have to grow into it.
The closet Where we will be spending many sleepless nights... The photo above the chair is actually a gorgeous panoramic shot of our trip with the Jeep Safari last year, but I couldn't find anyone to print it for cheap, so I settled on cropping it down. I also really wanted a new rocking chair but it wasn't in the budget. I need to paint the little table but let's be honest, that's probably not going to happen haha. You'll notice red "accents". Those are from when I thought the room would be more red than blue. Oh well. I sure do love that Jeep decal though. Here's the fabric that inspired it all. It was too cute not to use (also non-refundable) so we went with it anyway even though it technically doesn't "match" the quilt. My mom made the mattress sheets out of it and I love it. 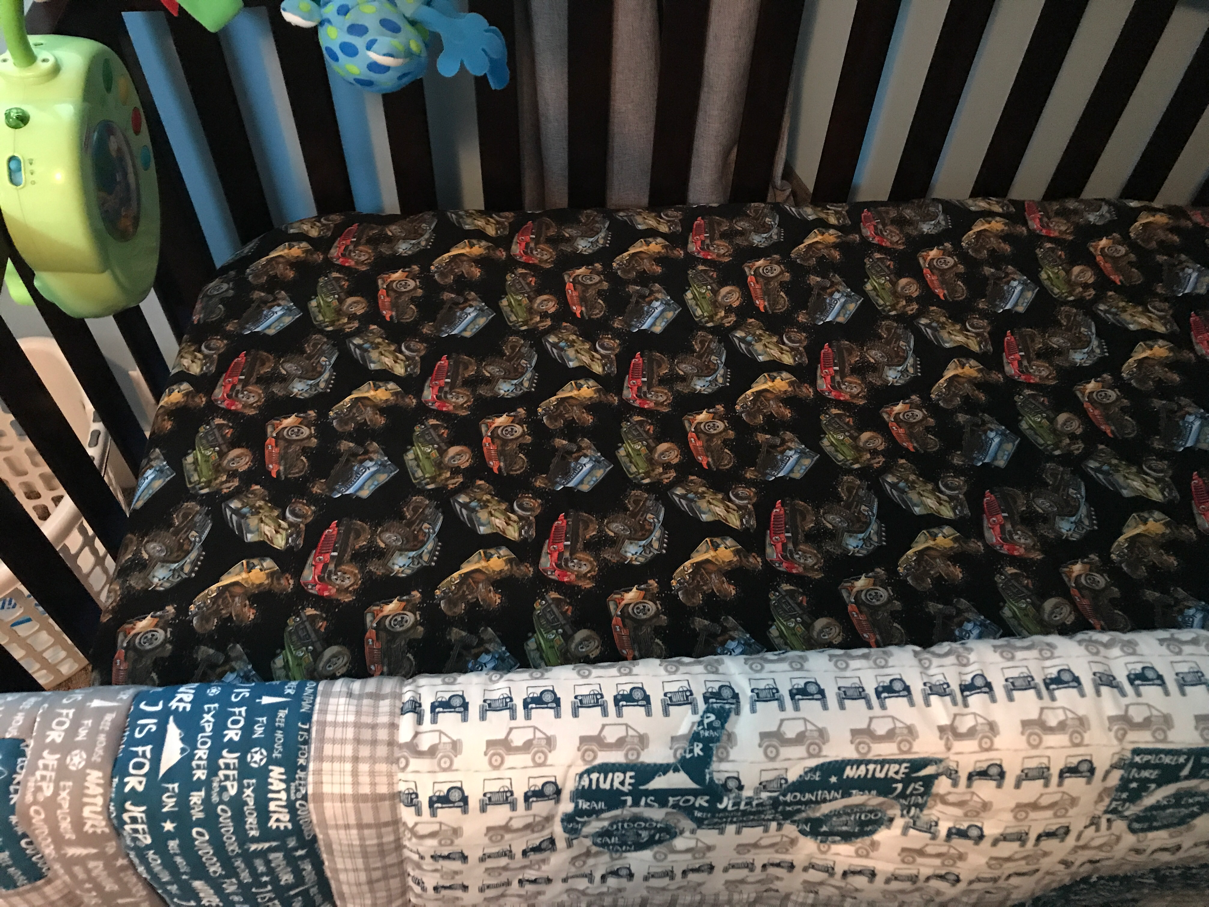 So it's finally done! I've never cut it this close before on getting a nursery ready, but I have zero faith in him coming on his own. None. I don't even have a hospital bag packed, the car seat installed... nothing. I'm 100% sure I'll have to be induced at some point, which gives me time to get that crap ready. It's probably the sheer exhaustion in me, but it honestly feels like he's never going to come. I just want to sleep the next few weeks away. Can I?!
Tomorrow is the great and powerful eclipse. I'm a little excited, and then part of me wondered if maybe it would be a good, not-so-busy time to go to Costco haha. I'm anxious to see the pictures from everyone who ventured the mobs to see the whole thing. Should be cool!
See you soon.
Posted by Megan and Cory at 6:07 PM

But he did come tomorrow!! The moon does crazy stuff to pregnant women.