I Have No Idea What To Title This Post 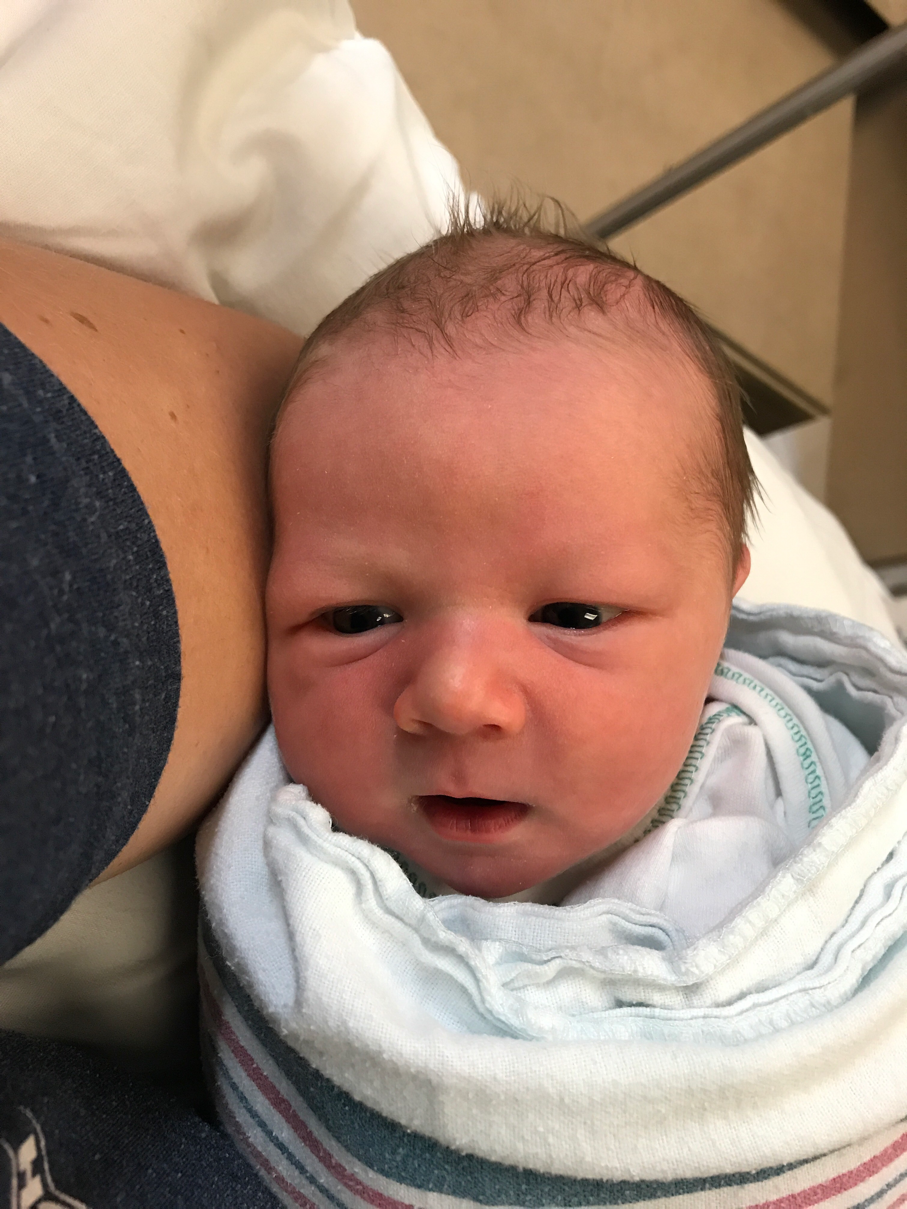 I'm warning you now this post is going to be all over the place... I'm just going to go through my camera roll and apply thoughts as they come to me. It'll be just like talking to someone with ADD or who is sleep deprived. Fun for you!
While I am insanely happy Logan is here and healthy, he really came at a very busy time. I was still in the hospital on Kennedy's first day of first grade which made me so sad!! But she got to come to the hospital that morning so I could do her hair. She had breakfast with us and got to hold her brother again before Cory took her. So we have a less traditional first-day-of-school picture. But Cory took lots of cute pictures of her and she's had a great week so far. 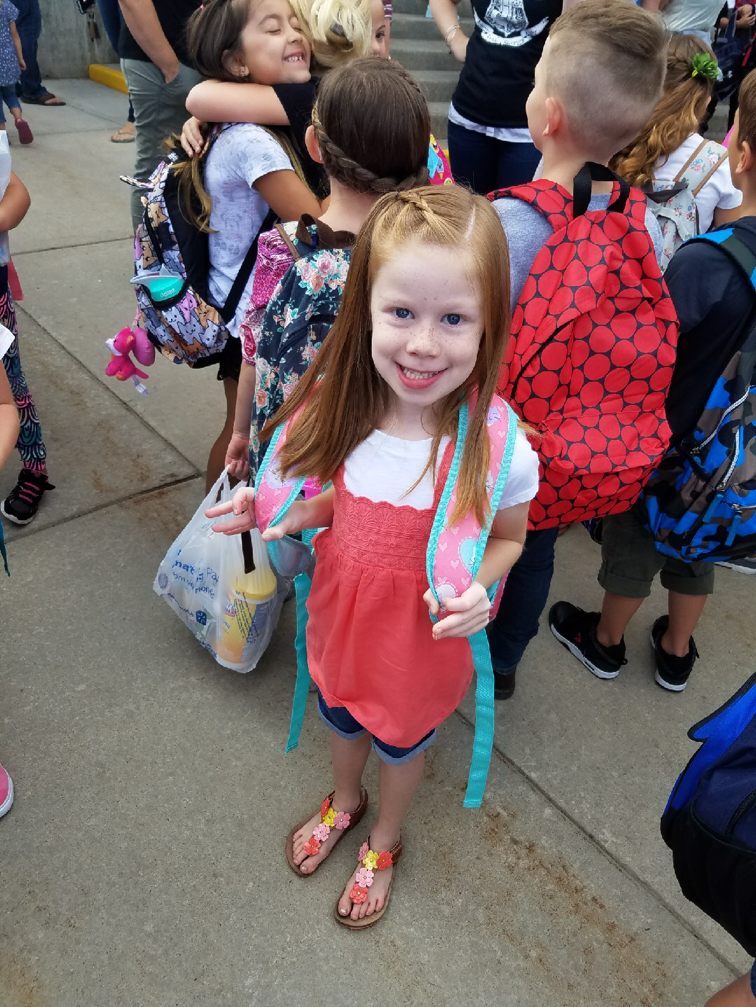 Her teacher is really cool and I'm excited to see what she learns. 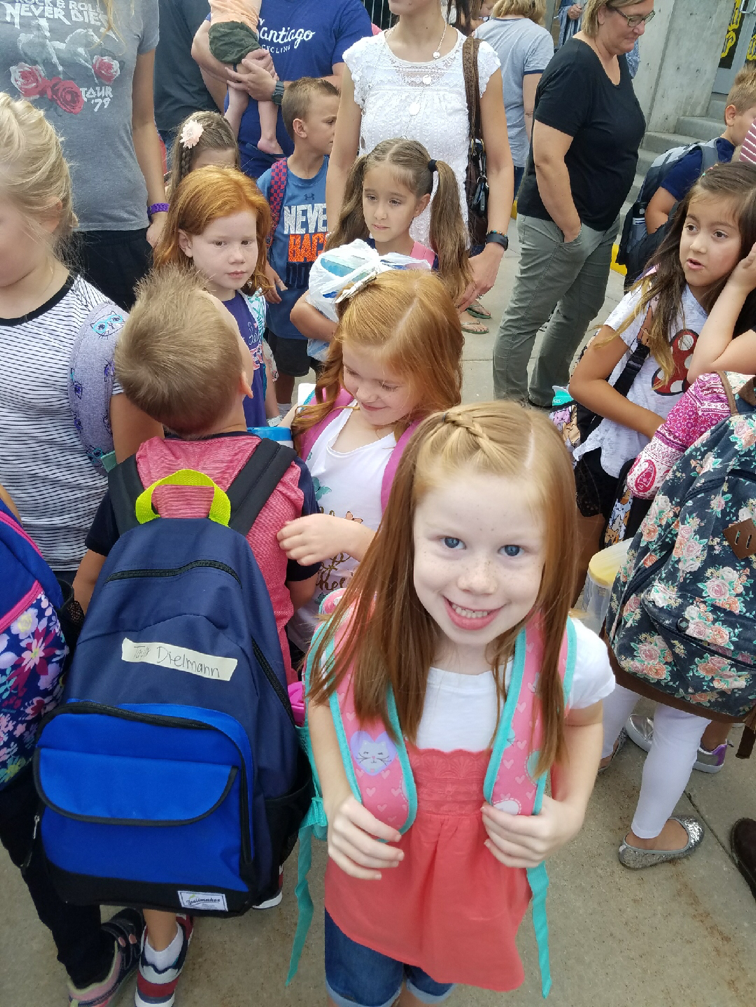 I was released from the hospital a couple hours later and we finally got to go home!! 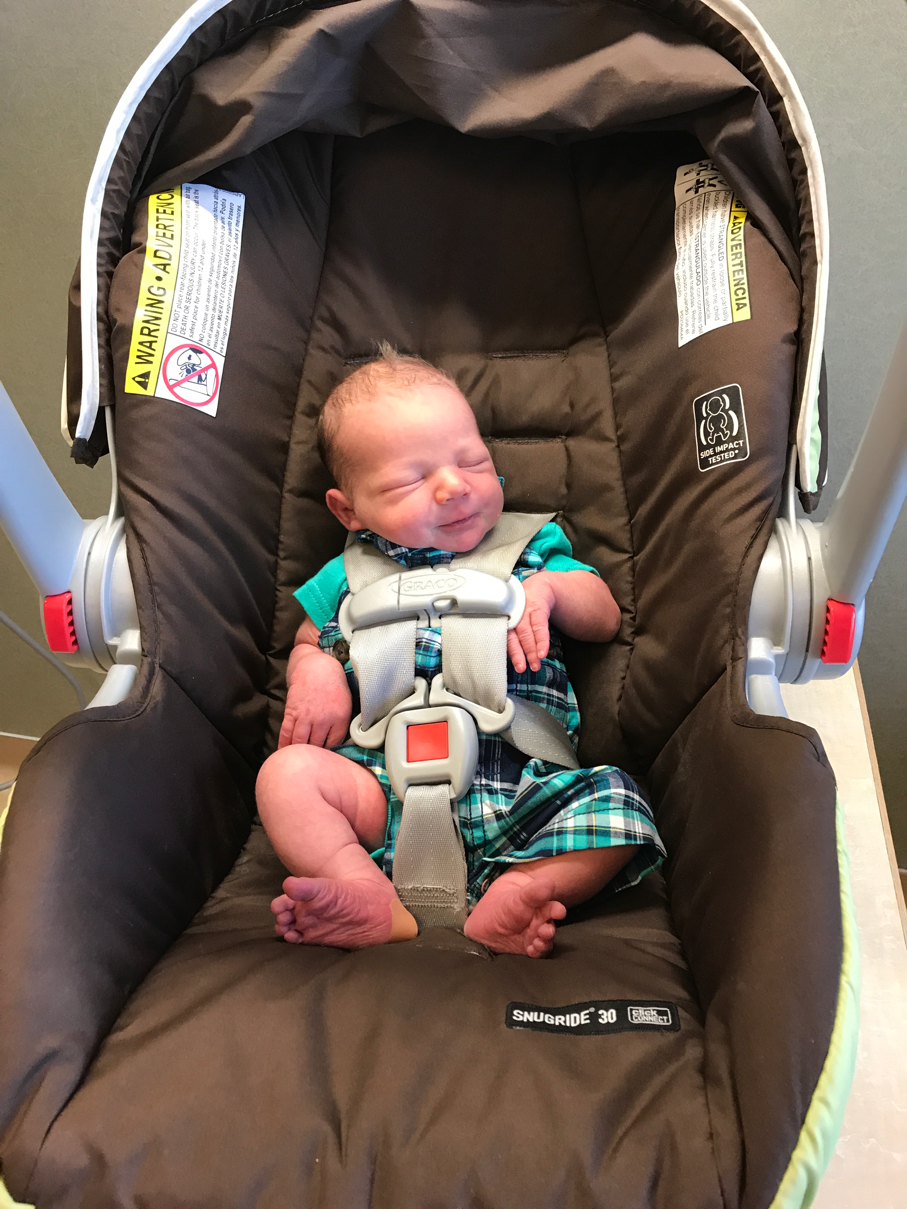 Brynlie made sure everyone was clean and smelling fresh before we headed out. Other than not having to worry about nighttime feedings, I am not a fan of the hospital. So it was so good to get home!
I am doing really well. My back was really sore (and still has some lingering soreness) but other than that I haven't needed any pain medication for anything else. I think many people don't take me seriously when I say pregnancy is really hard on me because I feel WAY better than I ever did being pregnant. Even with less sleep. So I've been feeling great and have gone on many "outings" to the store. In fact we went to Target right after being released and the lady at the checkout kind of yelled at me for being there. But we needed a few things for him that we still didn't have and I promised her I would go home and rest. Which I did.
We've been enjoying many, many baby snuggles. 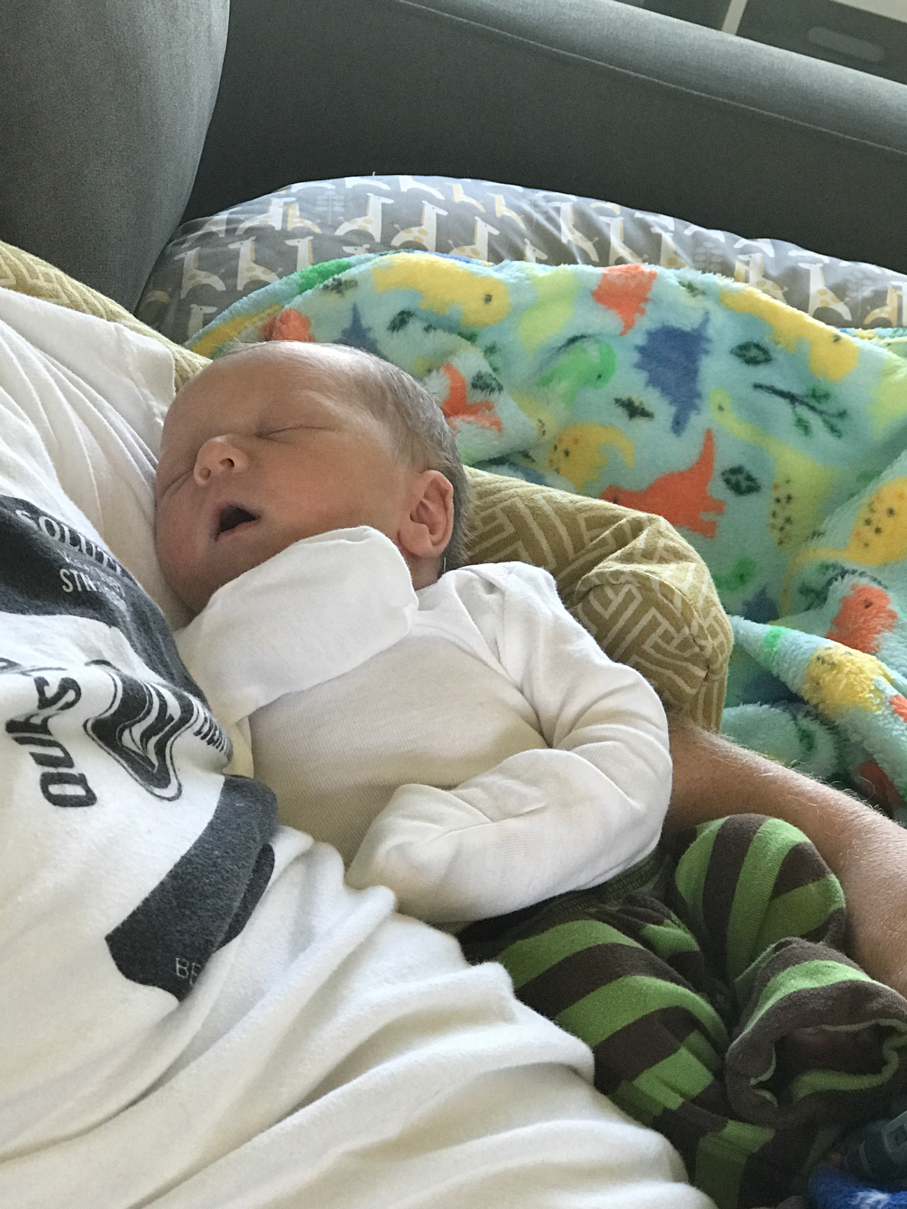 I can't get enough of him!! I really can't! I got super emotional this morning thinking about how this is the last time we will ever have a newborn. I won't ever get these moments again so I'm going to cherish them. I never ever want him to grow up!! He was 1,000% worth every minute of getting him here.
He definitely has his days and nights mixed up, but we're doing our best to change that. And with Cory helping me I'm feeling hopeful we can get him down to at least 2 feedings a night before I have to tackle it alone when he's working. Fingers crossed! I also started my post-partum-depression medication right away this time, so I'm also feeling confident that I'll be able to handle things much more easily this time around. I'm definitely still having hormonal swings cause I cry super easily, but it's usually for normal things (like Kennedy being sad) and I don't feel hopeless and terrified.
One thing that isn't going well is Brynlie is having a really hard time, and that makes me sad. In one week she lost her binky (which she still cries for), suddenly lost her Mom and Dad for a few days, got a new brother, and lost her sister who's now at school the whole day. It's been rough for her. 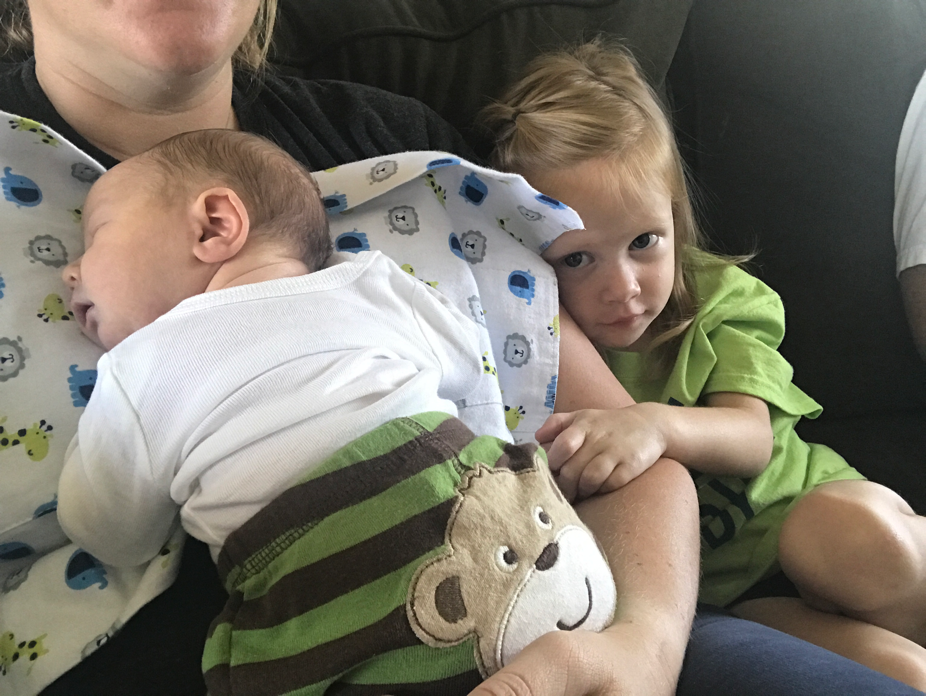 She's been loving on Logan more than I expected. She wants to hold him a lot and she talks to him frequently. While getting ready this morning she helped keep his binky in and kept giving him hugs. I think the thing that's been the hardest for her is losing her sister. They played together constantly all summer long and now her best friend is gone. She's been crying a lot for her saying she wants "her Tay-Tay" (that's what she calls her). 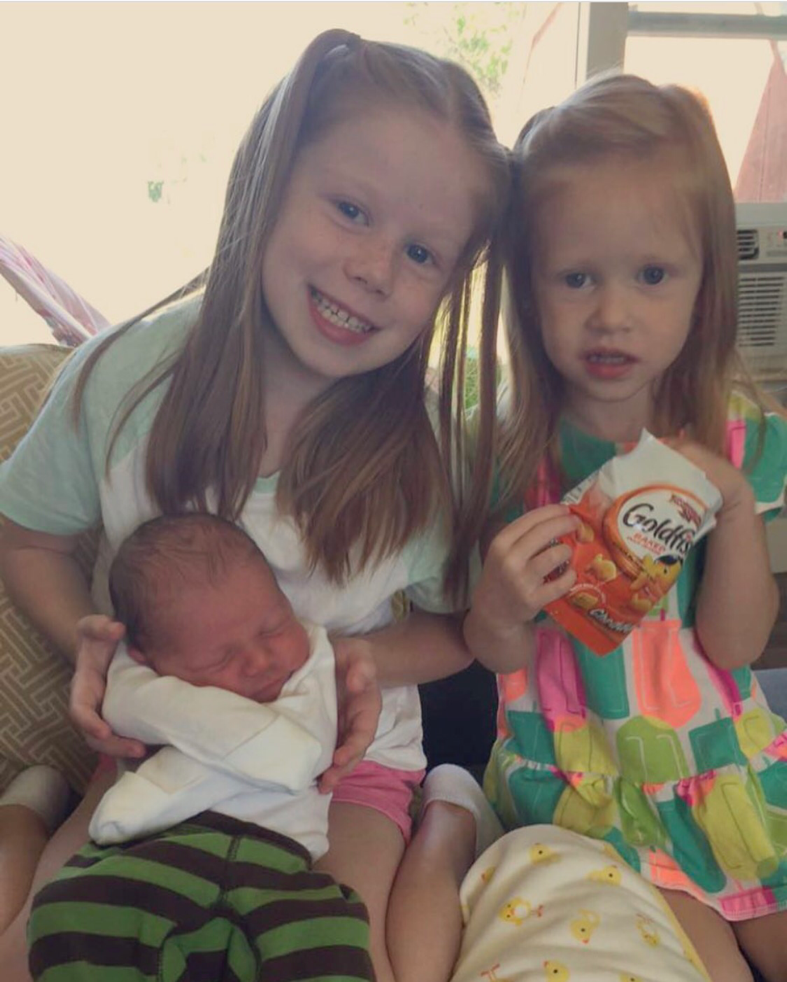 (And now I'm crying... see? Normal things) Brynlie has even started sleeping on the top bunk with Kennedy at night because she's having such a hard time. I think it'll help when she gets to start preschool in a couple weeks herself. And when we get back to a normal life routine again. Poor girl.
Kennedy, on the other hand, could not love her brother more! 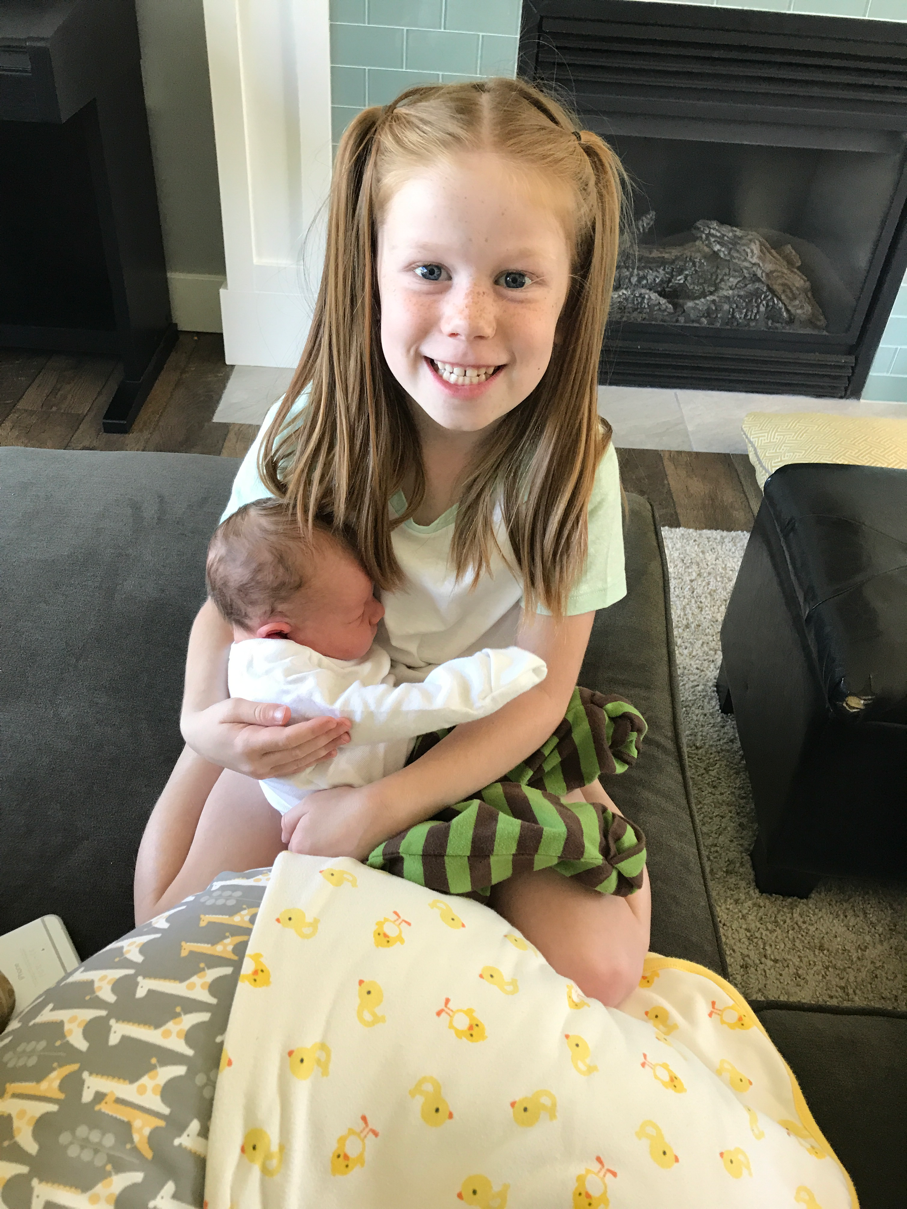 She's constantly wanting to hold him and is always asking me if he is ok. Once again, she's the guardian angel for our family and my heart is even more full of love for her for being like that. In fact today I put Logan on the floor to wake him up and get some clothes put away and he started to get fussy cause he doesn't like the carpet. She fixed it for him. And then she sat and watched him in case he lost his binky or kicked the blanket off so she could be there to help. I'm excited for her to spend more time with him this weekend since she won't be at school.
Cory is the best Dad! That man is amazing!! But one thing he is not good at is sitting around the house. We've been home 2 days and he's already going crazy. 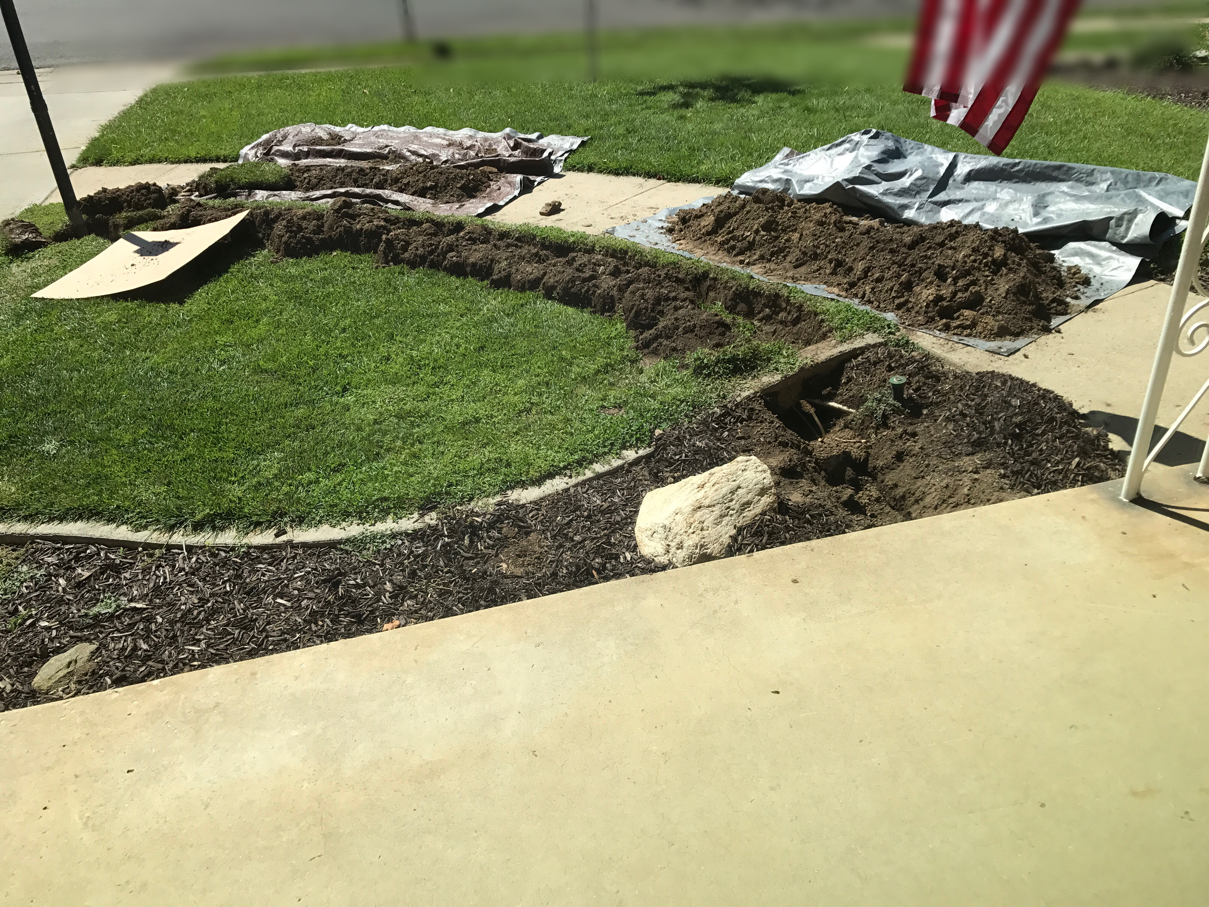 But at least he will have some time to get some projects done, like this one; fixing our little light post out in our yard, because apparently today was the day it needed to get done hahaha.
My heart is very full right now and I'm feeling so blessed. I was holding Logan today and got a strong feeling that he is a very special spirit. Of course that made me cry... but a good cry. I love my girls so much it hurts, but I'm also so glad I'm getting to experience the bond between a mother and her son, because it really is something special. And I feel like he's pretty close to perfect. 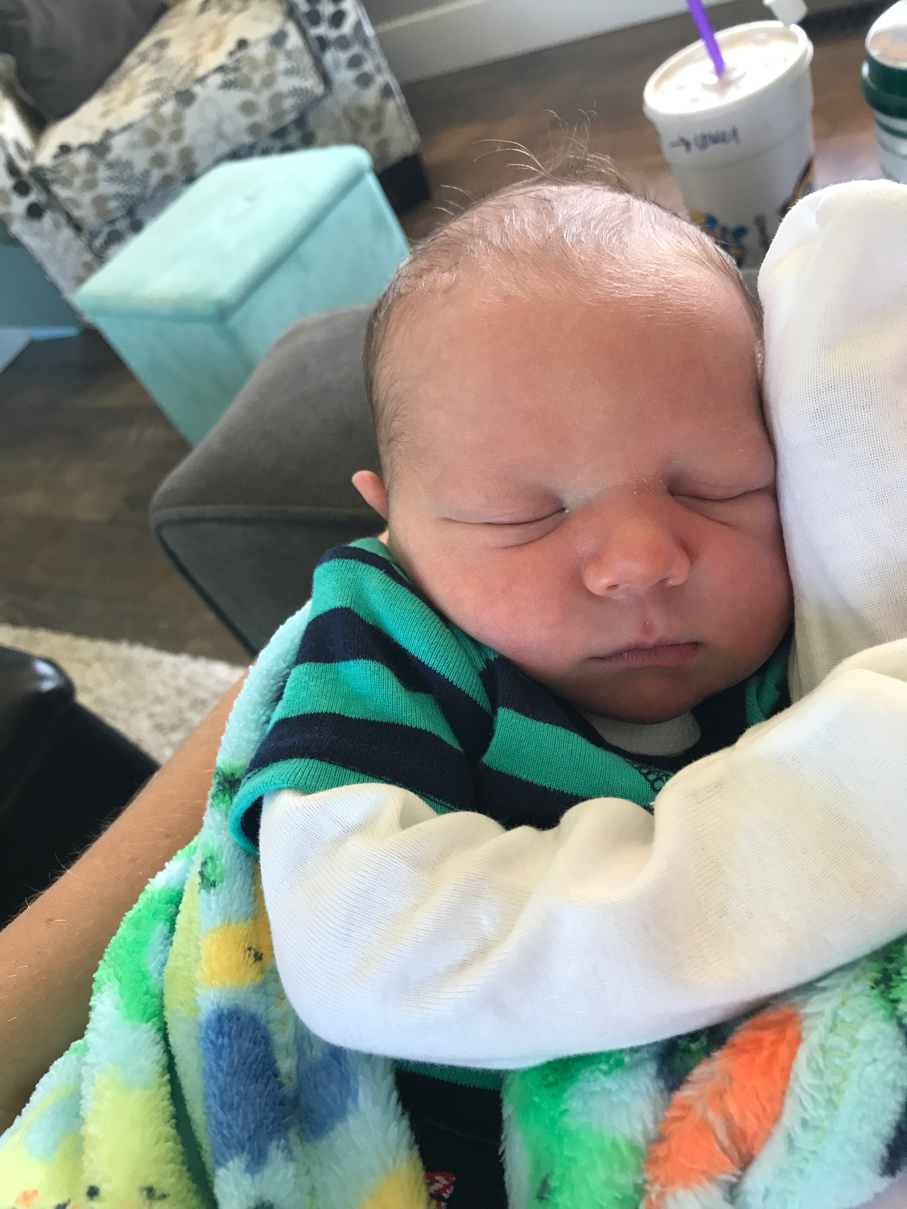 And I am loving how tiny he is! Well that's it for now. The girls are outside "helping" Cory with the mess he made (aka, throwing dirt at each other) so I'm going to go enjoy some more one on one time baby-snuggles. See you soon!
Posted by Megan and Cory at 7:36 PM

He is so darling! You guys definitely have a mold!