A Fun Workout and Devastation

Hello, all!
We got to celebrate this handsome dude's birthday yesterday. I can't put into words how much I love and appreciate him. As much as I wanna go on and on about how mind-blowingly good-hearted he is, I'll spare you the mush. But just know he is one special guy and Kennedy definitely gets her tender heartedness from him.
We spent the day finishing Logan's nursery. (Pictures are coming soon. We finally got some touch up paint and I hope to be able to fix those stupid spots tomorrow and then I can take pictures). Cory put up the blinds and curtains and finished the shelf and hanging rod in the closet and I hung up some canvas portraits. I told Logan he can officially come now, but he's not listening.
For dinner my mom watched the girls and we headed to Tucano's; our yearly tradition. It was delicious as always, and I downed two whole jars of the mango lemonade.

I mean, it's amazing normally, but apparently it was just what I needed. Our waiter even let us take some home in a cup haha! It was fun to have a little date night and celebrate the man who keeps my world turning. Literally.
This morning my gym hosted a kids workout as a fundraiser for Operation Underground Railroad. Since Kennedy has been so in to fitness lately, I knew we couldn't miss it!! She was totally in her element! And this was just the warm up! 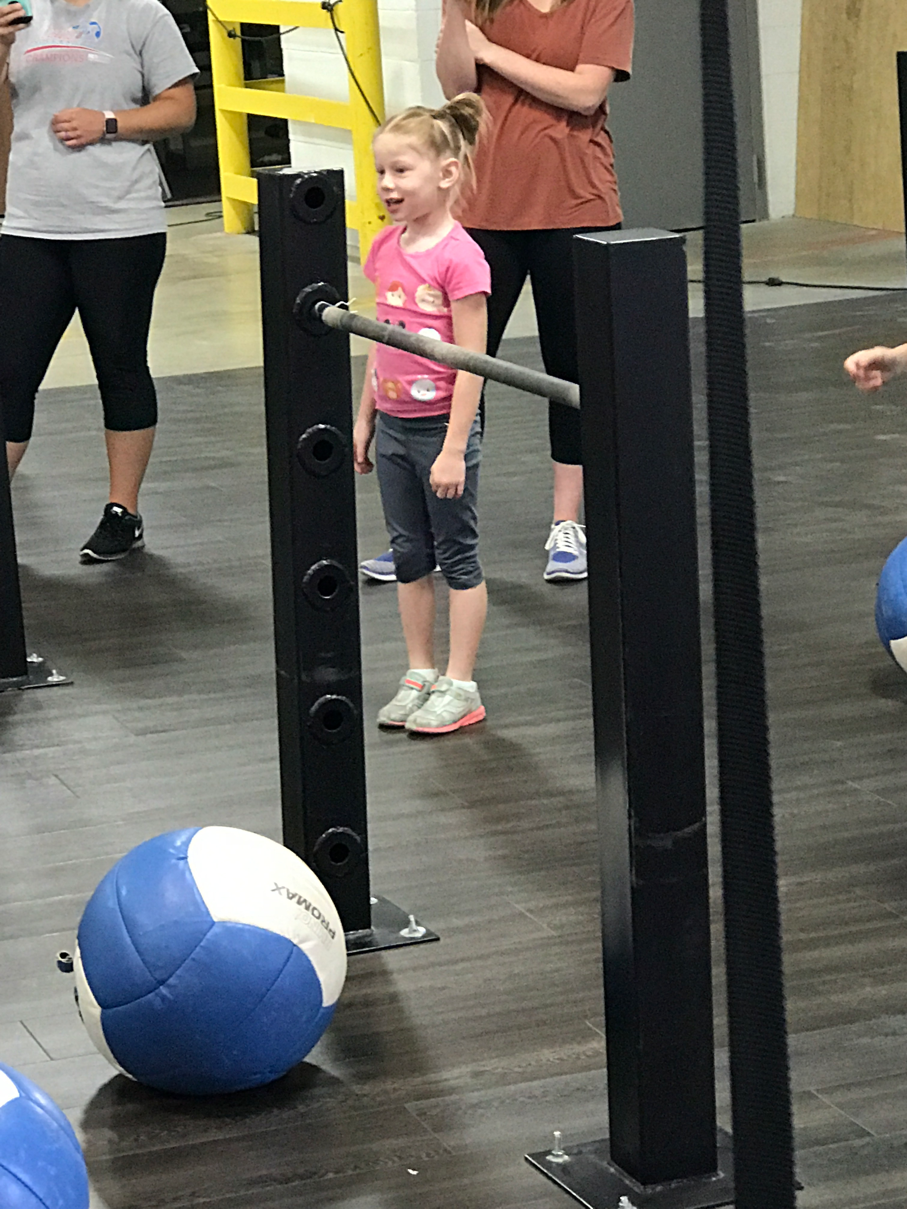 Then the actual fun started. They had to begin with 10 sit-ups 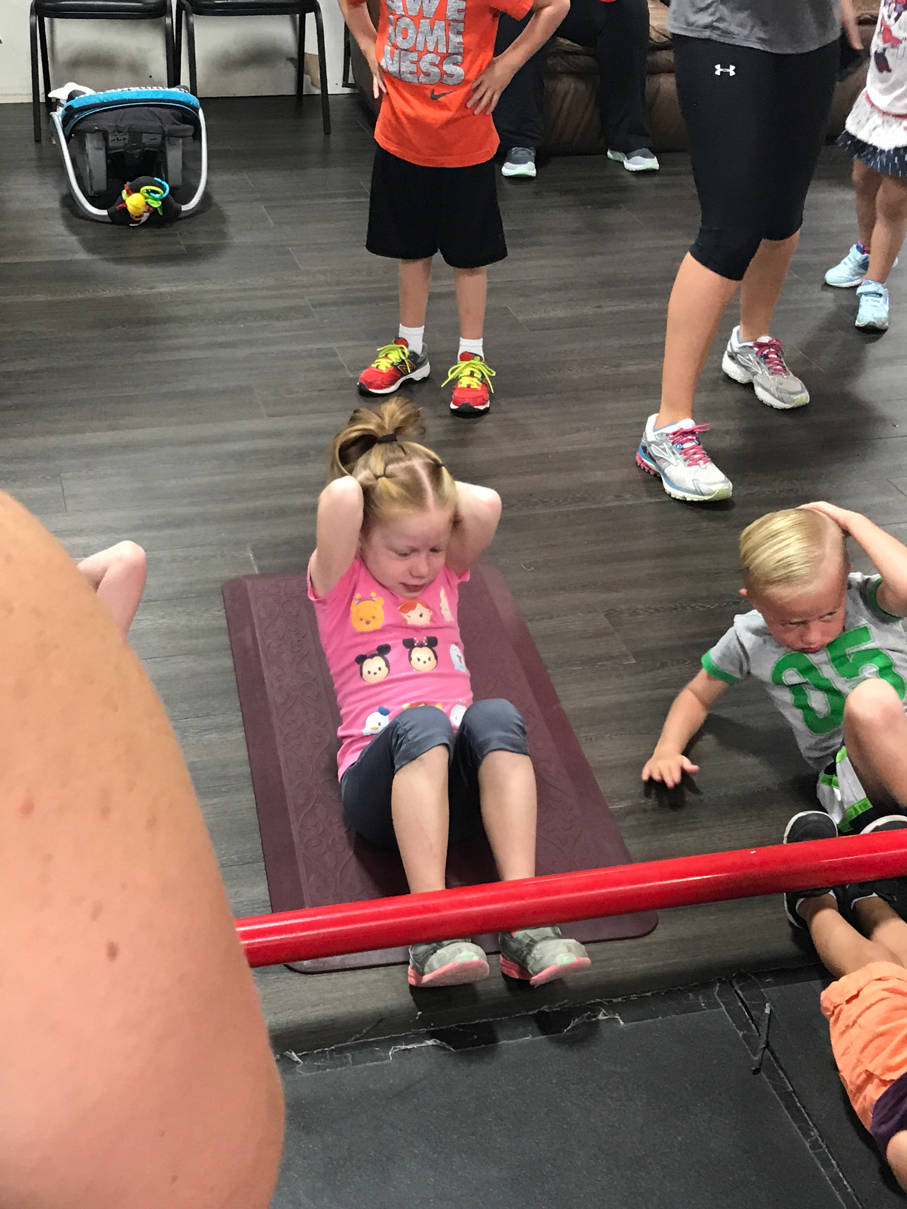 Then lift a 12lb ball over that bar 5 times. 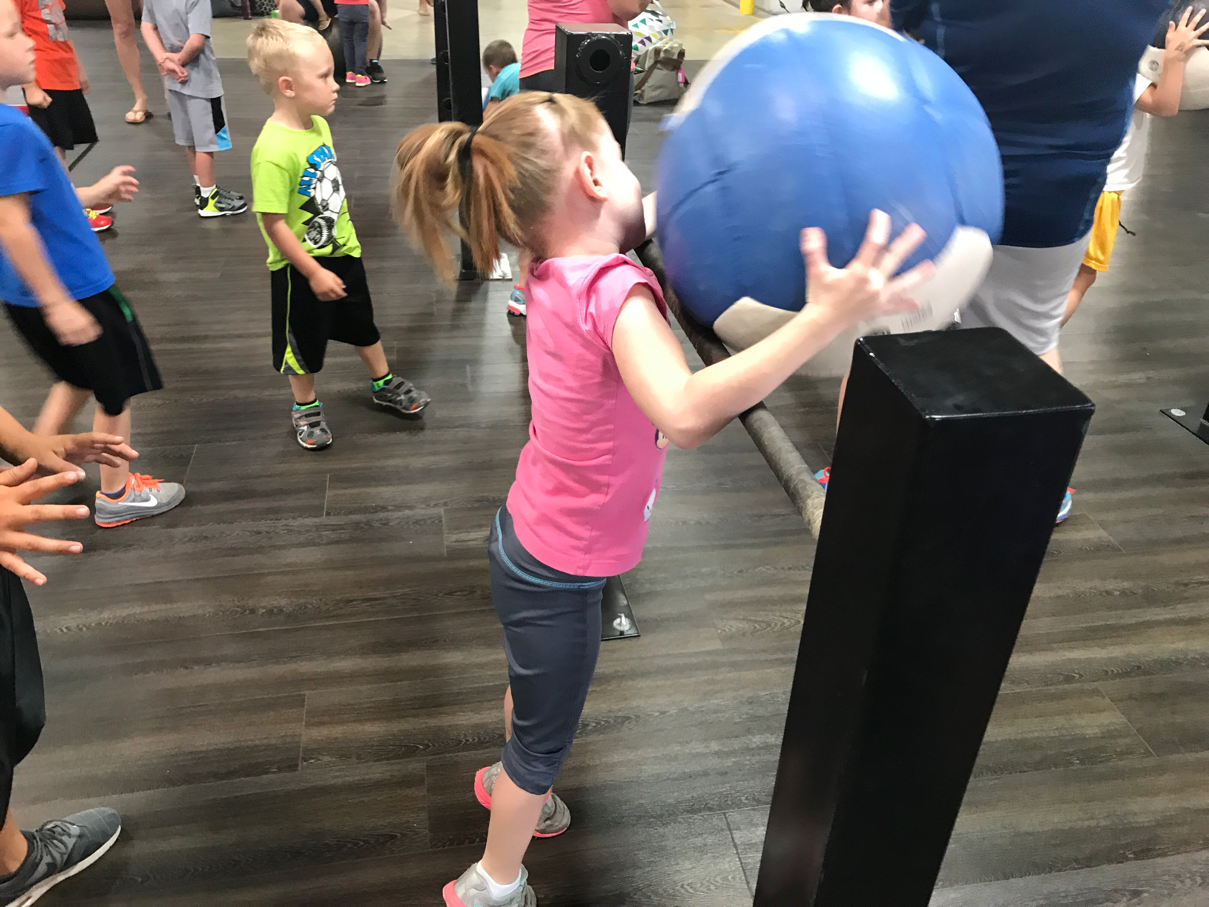 Then 5 pull-ups, which she did all on her own (we won't tell her those are actually chin ups haha) 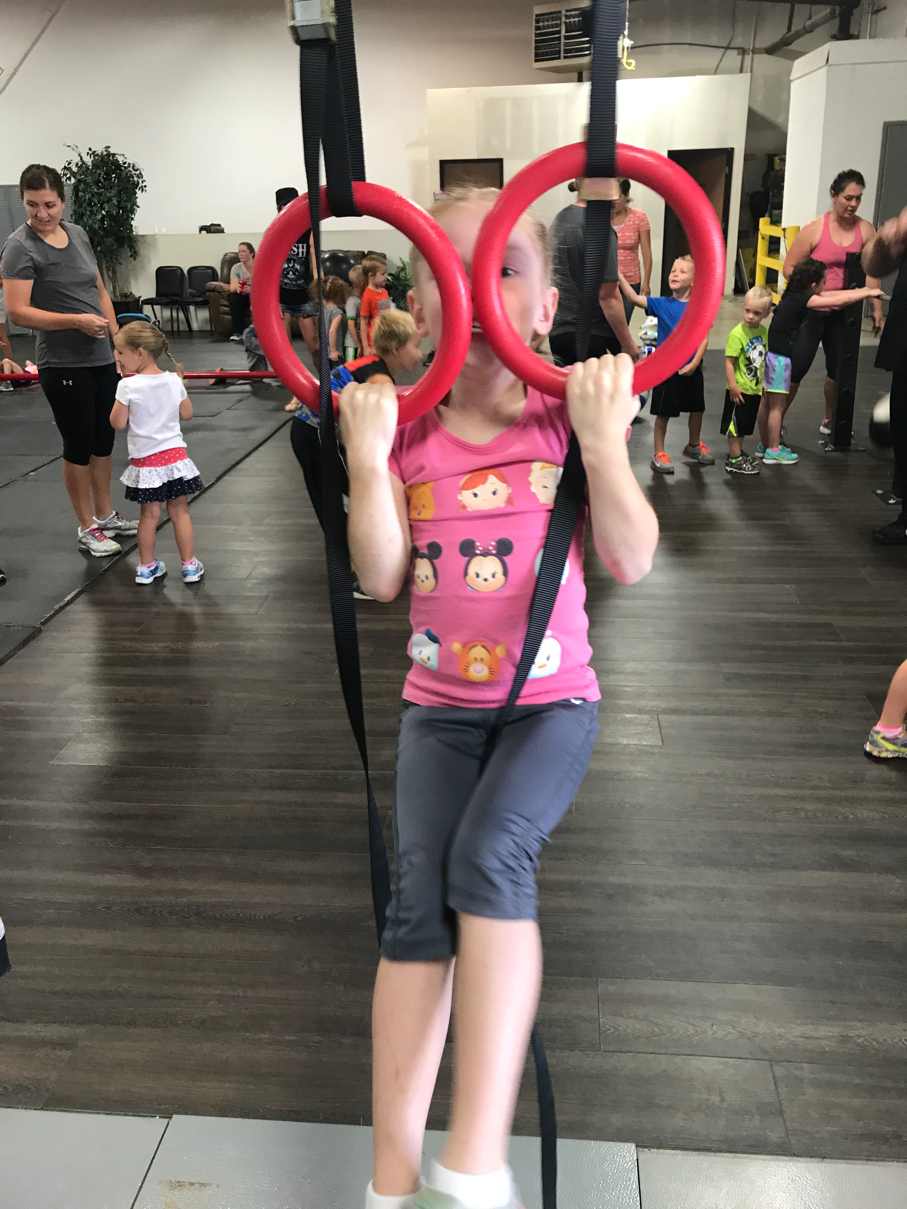 Next they had to hop over a bunch of benches. Kennedy was so fast I couldn't get a picture of her. Then over the stacked tires, which she also just blew through - American Ninja Warrior style. 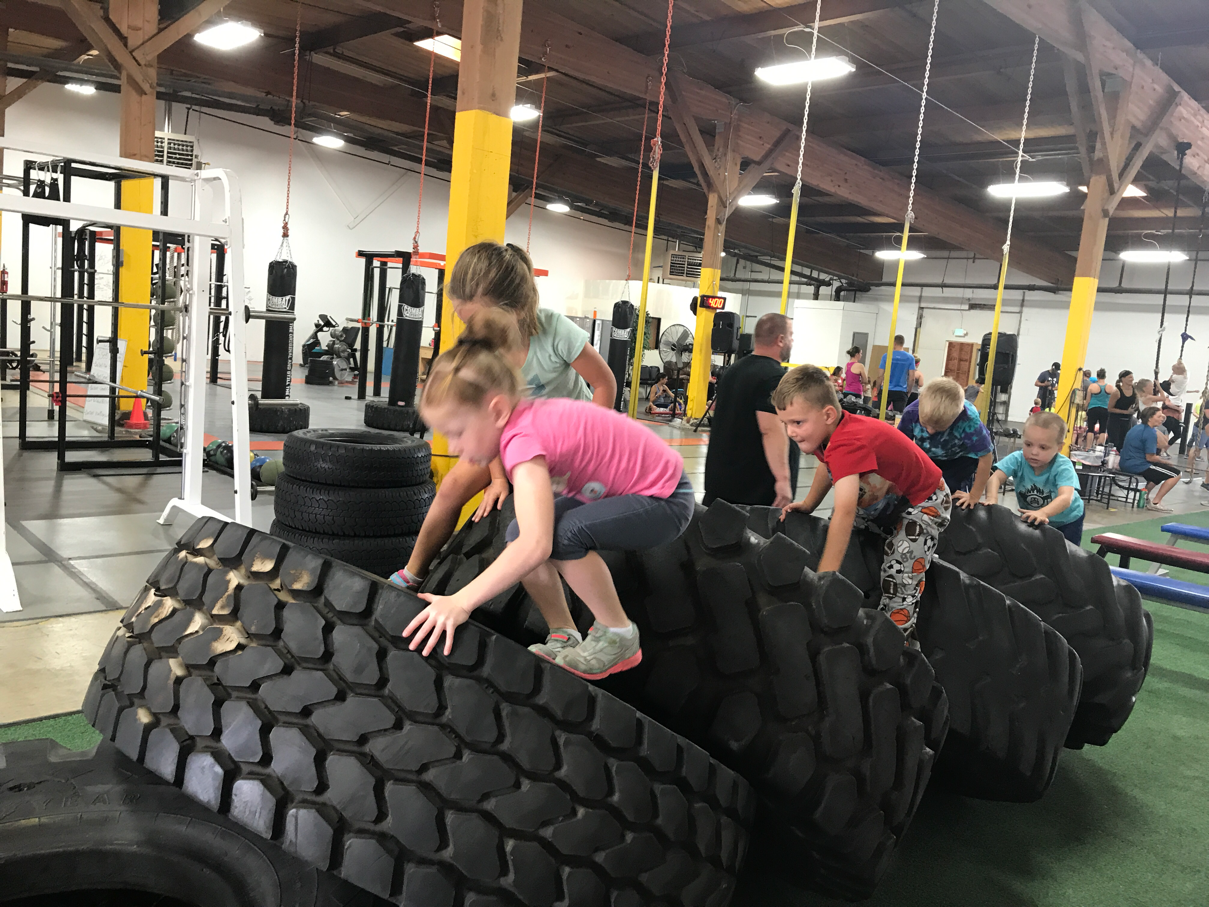 Then through these tires 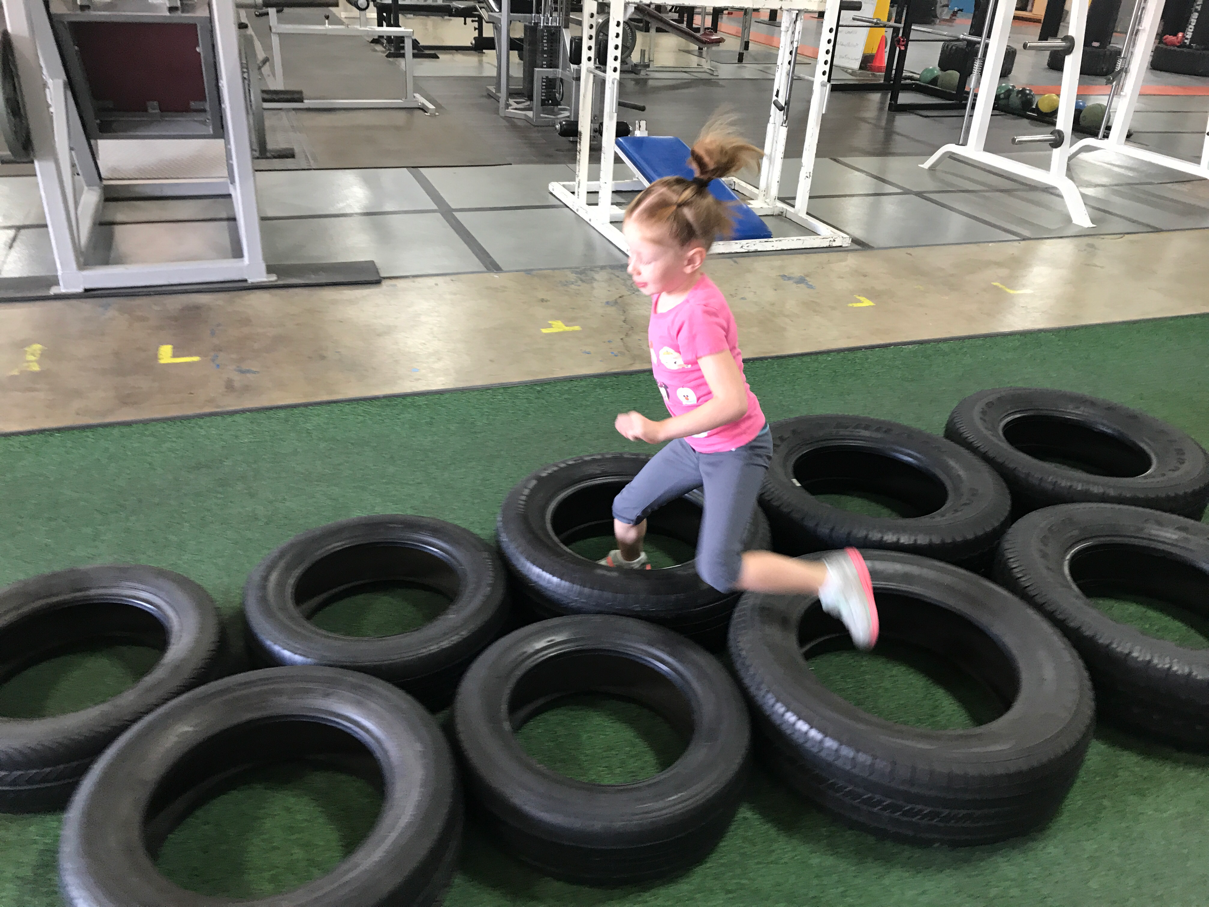 And lastly they ran through some cones and had to do a frisbee toss, neither of which I got pictures of.
Cory and Brynlie came, too! And thank goodness Cory did because I wouldn't have been able to handle both kids alone since B needed help on stuff. Her sit ups were the CUTEST thing I think I've ever seen and I didn't have my phone to get a picture! She also struggled with the ball-over-the-bar thing since the ball weighs half her weight. But Daddy was there to help with the pull-ups. 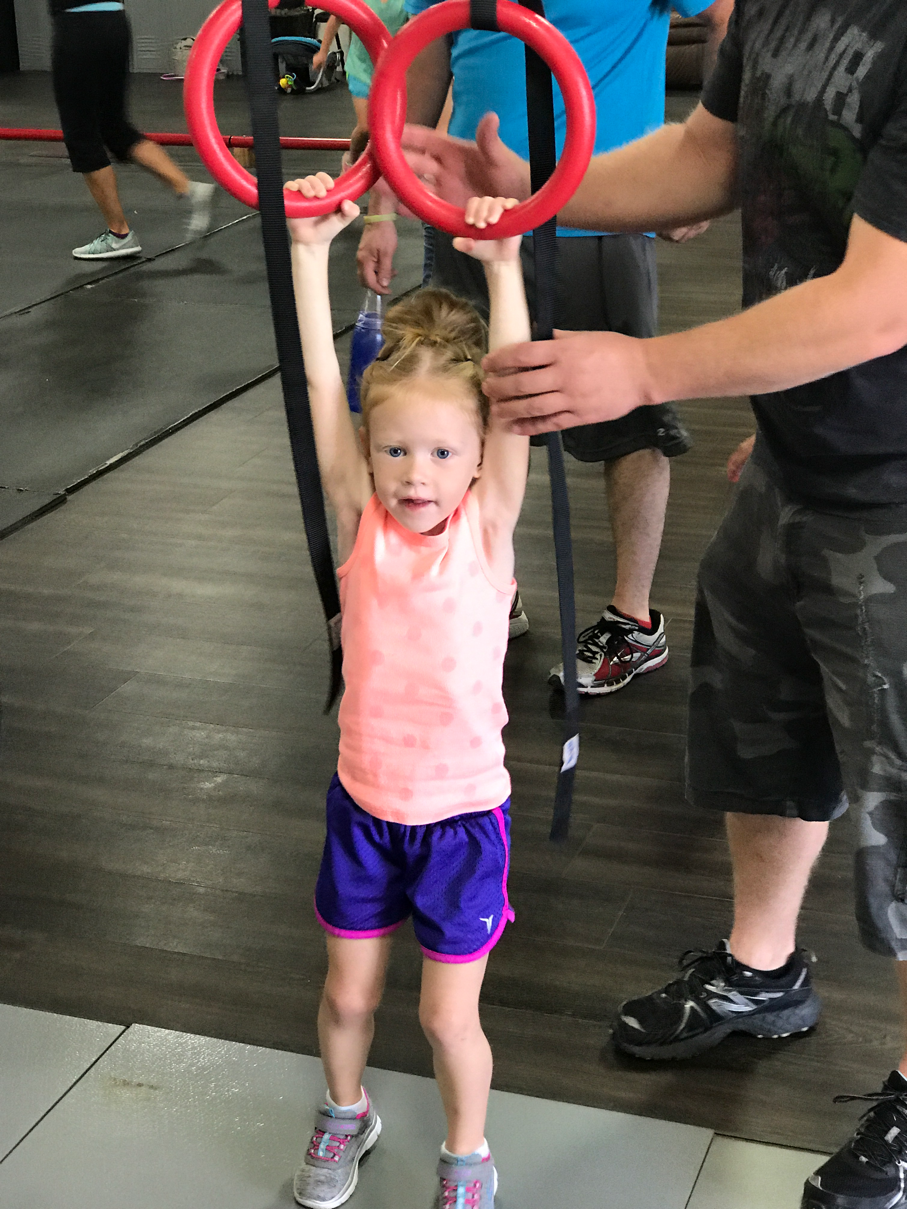 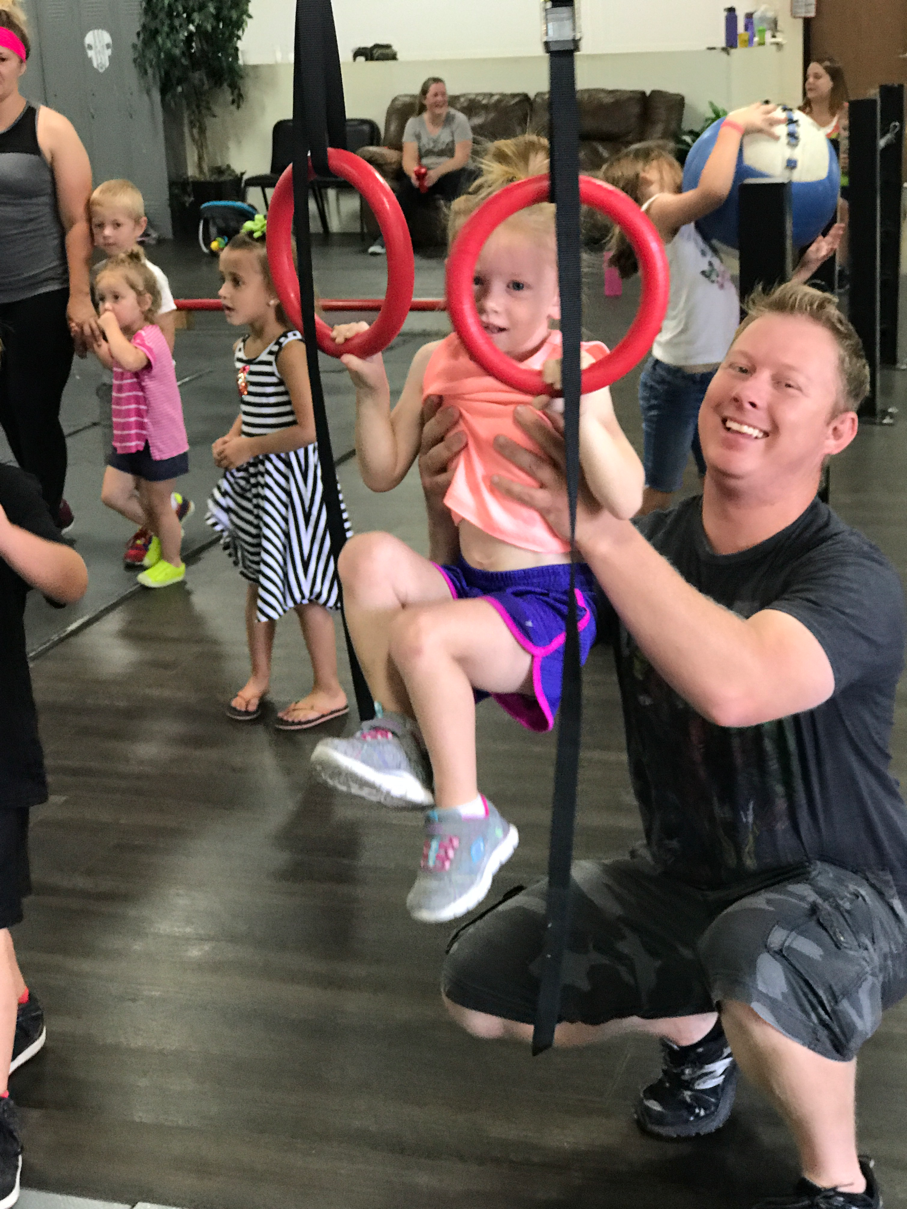 And she made it over the benches just fine 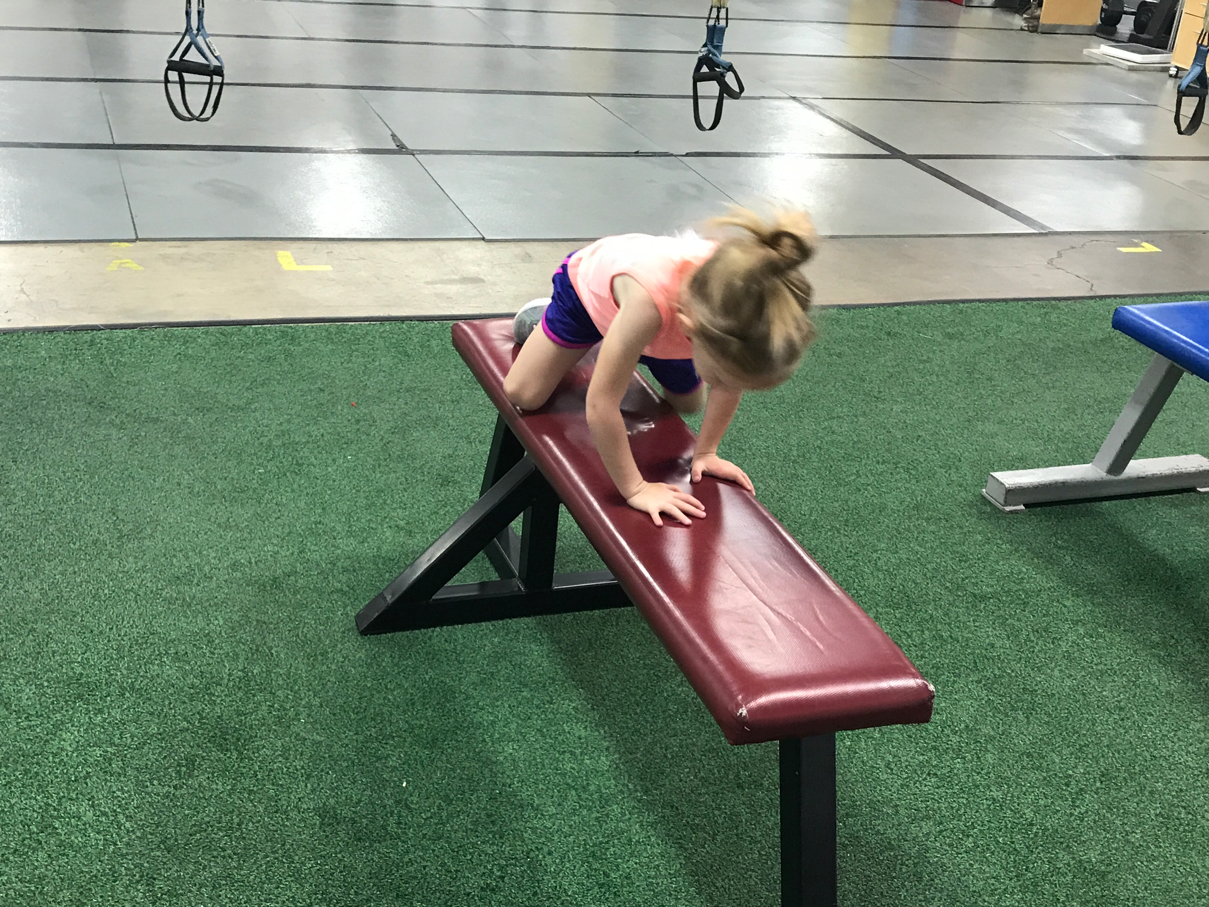 And really concentrated on the tires. That tongue sticking out means it's serious business. I was not allowed to touch her or help her on anything. It had to be Daddy. 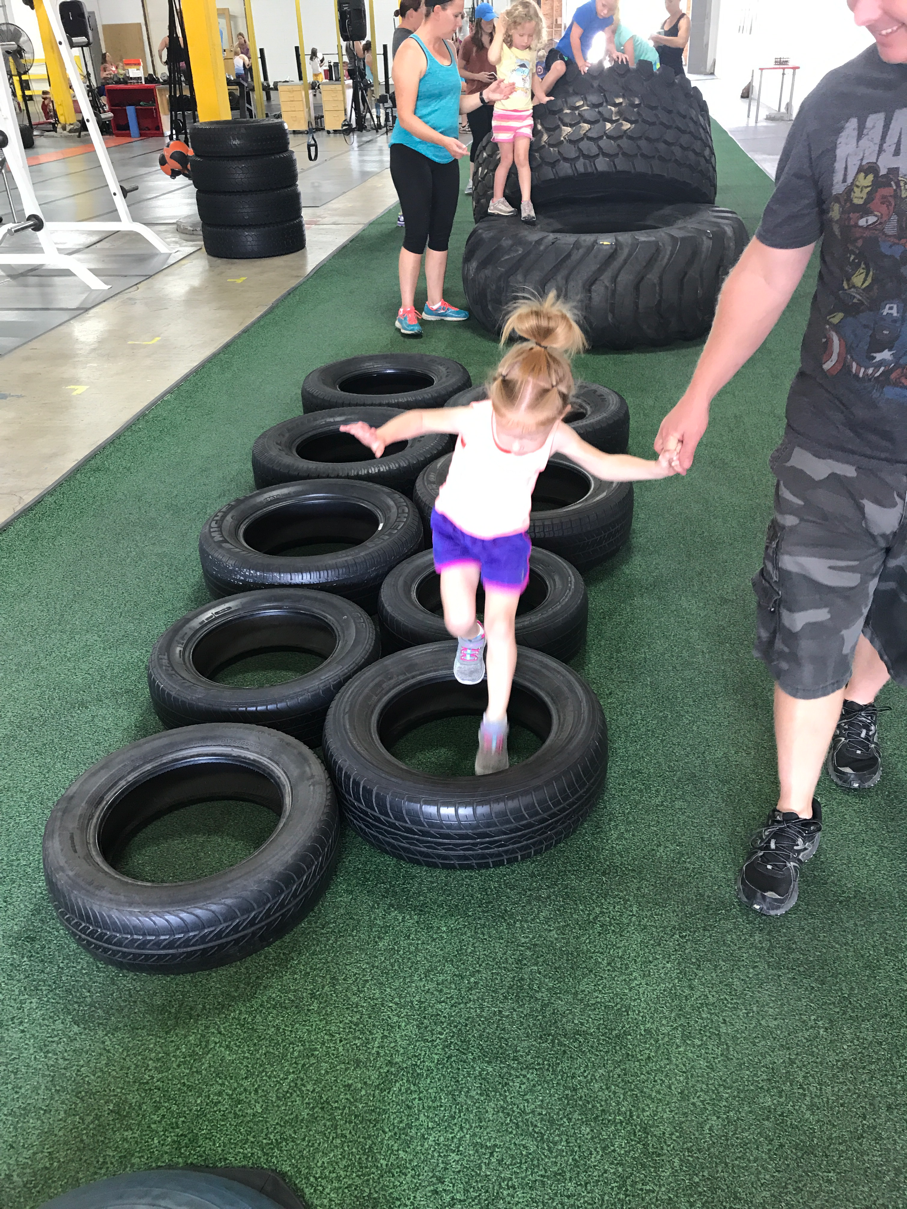 They both had a total blast and I loved every second of watching them. Especially Kennedy cause you could tell she was so proud of herself and was working so hard. I hope I can keep this love of being active and strong alive in all my kids.
So we're about a year and a half overdue for this... but we decided since we're having a baby in a few weeks that we had better get Brynlie off her binky. Yep, she was still sleeping with one. I know, I know... let's not talk about it. We decided to go with the Build-A-Bear idea again and see if it helped. 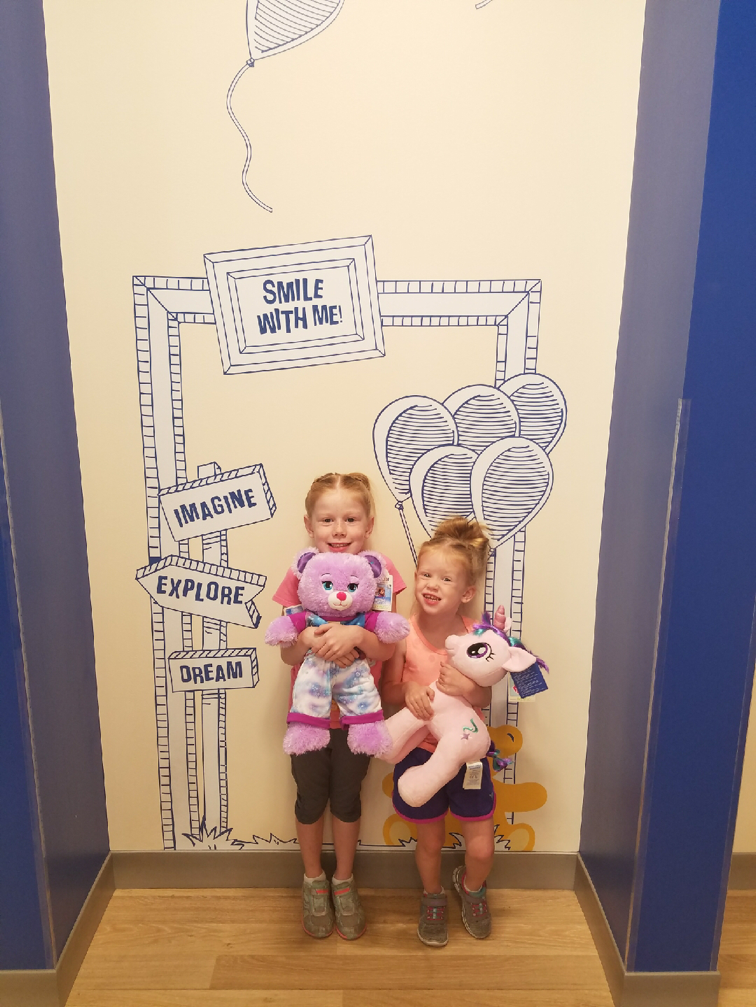 We didn't have the heart to tell Kennedy she couldn't pick one out, so we let them both get something. Holy cow you guys, that place is EXPENSIVE!! Employee after our children just picked out a $25 stuffed animal: "Would you like to add a sound recorder? How about a scent package? How about a special beating heart you can place inside? Did you see our My Little Pony Capes? These brushes are perfect for brushing out the pony's hair. We have pajamas for the bear that she will love! How about some sunglasses? Did you want a $5 special "take home" backpack for each animal?" Um, heck NO!!! Stop hawking your crap on us! And thanks for telling us about all this "fun" stuff in front of our listening kids who then begged for them. We finally let them pick ONE accessory and then left feeling like we got punched in the gut. I don't think we'll ever go back.
B put her binky in her "heehaw" just fine and they had tons of fun in the store and played with them pretty much the whole rest of the day. We tried to get her to take a nap since she was super cranky. She didn't sleep, but she never whined or asked for a binky so I was feeling super hopeful. And although we didn't love the idea of having to get Kennedy one, too, she has actually loved her bear an insane amount which has made it worth it. She even insisted the bear come with us to Lowes... in style. 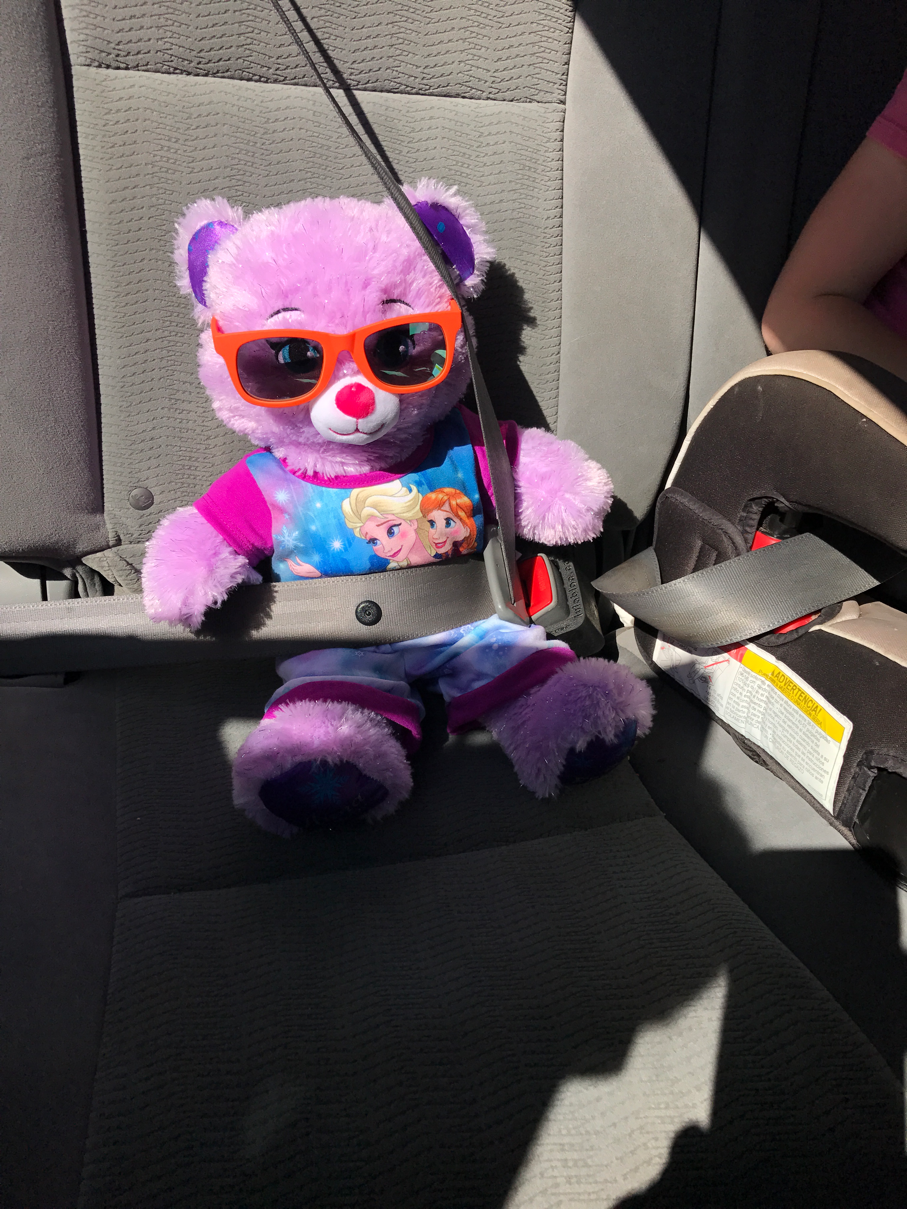 But... bedtime finally came and when Brynlie was told her binky was gone inside her Heehaw, she lost it. Her world came crashing down around her. She begged me to get the binky out and even tried briefly to tear open her pony and get it herself. She refused to sleep with her new pony since now it has betrayed her and she SCREAMED AND BAWLED!!! I let her go for about 30 minutes and then finally went back in their room and helped her calm down enough to fall asleep. Sweet Kennedy was trying to help her and even said a prayer for her that she would be ok with her new pony and not be sad without her binky. Can you believe that??
I anticipate a rough night, or even a rough few nights, until she gets used to this new change. We are definitely kicking ourselves for waiting so long and for waiting right up until we have a newborn who will be bringing rough nights with him as well. We're dumb. But whatever.
Given that we'll probably be waking up to sad crying lots, I think I had better get myself to bed. See you soon!
Posted by Megan and Cory at 9:16 PM

Ugh I'm contemplating pulling the binky plug too but you've got me rethinking it.

I love your thoughts.