Randomness and This Stupid Weather

Holy crap, this heat!! It's been above 100 degrees the last few days which is miserable anyway, but it's been killing me. I never thought I would wish the summer away... but here I am. Or at least the ridiculous temperatures. I almost feel like we're preparing for the zombie apocalypse because we have all our provisions and we're hunkered down in the house, waiting for the horribleness to pass us by.


Dear July, stop being such a douche.


My mom gave Kennedy a microscope for her birthday. She loves bugs and collecting "special things" as she calls them, and now she can look at them super magnified. But first, some specimen collecting was required. 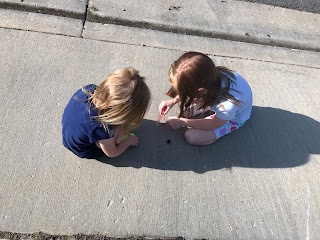 They managed to find some dead ants and stored them in the little bottle. Kennedy even had me label it "ant" so we would know. 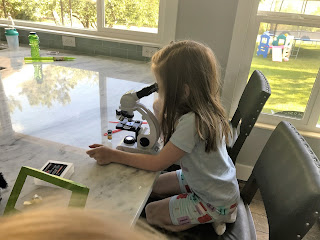 And for the record, I draw the line at spiders. She tried to bring a dead one in the house the other day and I just couldn't allow that. *shudder*

It's been pretty fun to see random things close up. She's really enjoyed playing scientist and I love watching her mind work and grow.

In case you were wondering, this is why I despise Goldfish crackers. 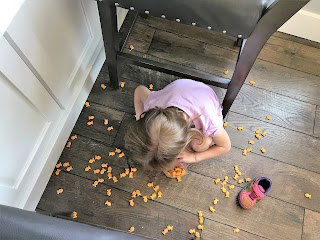 How they always manage to get everywhere is beyond me. I swear we always have enough spilled in our car on any given day that we could survive in there for a week if we had to. I hate them!!

The other night we were feeling bad that the girls and Cory hadn't seen any fireworks. We decided to venture out to the Eaglewood Golf Course Fireworks in North Salt Lake. We were able to park right at the clubhouse because we had my dad and his handicapped pass. We even found a shady spot like 50 steps from the car!

We spent our time people watching, which wasn't that hard because we found out the clubhouse is where all the Jr. High and High School kids hang out. That couldn't have been more annoying. I can't tell you how many butt cheeks we saw with all the disgustingly short shorts. We also played some ball with the girls. Kennedy really does have a natural gift for softball. She just needs a little more practice figuring out her mitt. 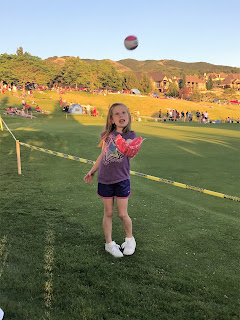 And her arm! No matter how far she was from Cory she threw it fast and hard, right to his hands every time.

Then Brynlie wanted a turn and loved it just as much. 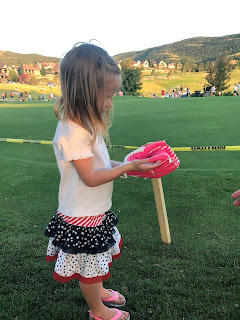 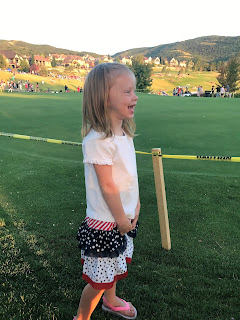 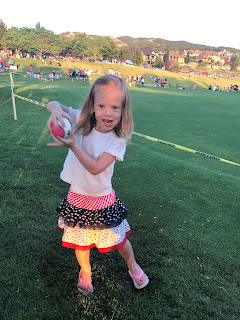 The fireworks were pretty fun and both girls loved them! Our plan, since we were so close to our car, was to pack up fast and try and get out before the traffic got bad... That didn't happen. First, we had to wait a good 15-20 minutes for the crowds to get out of the way. Then there were 2 accidents apparently that shut down the two main roads down off the hill. We were diverted some insane way out and it took us 2 whole hours to go 2 miles. Our plan failed. Miserably. I got my parents home around 12:30 am and people were still being directed off the hill by police officers. It was a giant mess!!

This man and his ladies... 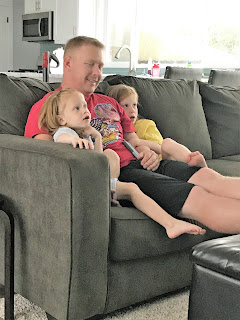 They were watching Transformers together (cause that's a normal show any little girl loves to watch) and couldn't possibly watch without being as close to him as possible. It's been great to have more time with him. The only problem is we get used to having him around on his days off, and then he has to work and we miss him terribly!

I'm 31 weeks pregnant today. I am literally praying that he gets to come early. Even just a little bit. I obviously don't want him so early he doesn't get to come home with us, but 8 weeks away seems so much more manageable than 9. We still have hardly anything ready. I haven't even finished painting his nursery! Mom? Wanna help me??

When I think about the impending delivery and aftermath I get really nervous, but mostly I am really excited to just get him out and hold him and be done being pregnant FOREVER!! tick tock, tick tock! haha

And just some proof that she actually does smile once in a while. 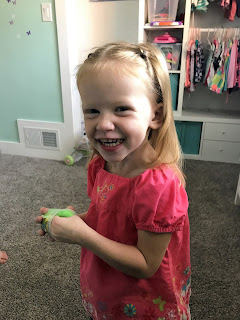 Even if it takes making farting noises with flarp to make it happen.