Last night was family night at the Bee's game for Cory's work. He had 8 free tickets that came with a free hot dog, chips, and a drink. We invited my brother Collin and his family to join us since we only needed 4 of the tickets. There were also fireworks after the game! Yay!
I had been looking forward to this for weeks. Free family fun; even if it was another 100 degree day. Luckily the sun was hidden behind clouds for most of the time it was up which was awesome cause our seats were about as east as you could get before the grass. But hey, they were free! We were having a great time. The designated hitter for the opposing team kept launching hard and fast foul balls into our section. They were coming so fast it was a little scary, but we were vigilant and there were lots of adults around with mitts hoping to catch one.
A short while later he got up to bat again and I told Cory, "Here comes the guy who tried to kill us all last time, so we gotta watch out." I looked over and noticed that a lot of people had moved seats since last time he batted and our kids and Allison, my niece, were basically sitting out in the open. I thought to myself how awful it would be if one of the balls hit one of them and was going to keep a close eye.
The next pitch he took came flying low and hard towards us, but we didn't see it until it was too late... my thought I had not even 30 seconds before came true... the ball flew right past Allison and slammed into the side of Brynlie's head. I heard the section behind us scream and gasp and Brynlie started to scream. The ball hit her so hard it knocked her to the ground.
Cory picked her up as the lady behind us yelled, "take her straight to medical!!" And he was off before I even got to see her or where the damage was. I told Kennedy to stay with Collin and Natalie and I frantically took off after Cory. All I cared about was catching up to them. I could hear her wailing as I kept watching him get further and further away. I bolted up the stairs and somehow started running after him.
When I reached the top I saw Cory running with two security personnel in front of him yelling at everyone to get out of the way. I ran as fast as I could to get to them but never fully caught up. All I could hear was Brynlie screaming and kept seeing the shocked and frightened faces of the people Cory had passed. I was FREAKED OUT! I felt the pit in my stomach build as I kept thinking, "please let her be ok, please let her be ok!!" Cory told me today he was thinking the same thing.
We finally reached the first aid room and I was able to catch up with them but was so tired I got in the room and collapsed on the bench. The medics examined her head, checked her pupils and asked her a bunch of questions, and looked in her ears. They gave us an ice pack to apply to where she was hit. I was trying my best not to cry and I was terribly out of breath so I didn't do much but watch as they worked.
The ball ended up hitting her at the top of her ear. Her ear was super swollen and red (still is today) and she's developing a pretty bruise right behind it. They watched her for a while and I had to fill out medical forms but it was looking like she was ok for now. They asked us if we wanted an ambulance but we didn't think it was that necessary. They gave us a list of things to watch for in case it ended up being a major injury that just hadn't manifested itself yet.
After we calmed down we thanked the medical staff and decided to go sit back down and watch her closely. Her head was (and is) very tender and she was really shaken up. As soon as we headed down the stairs to our seats our whole section started standing up and asking us if she was ok. I just walked down giving a thumbs up to everyone haha. After we sat down people kept coming and talking to us to make sure she was alright. It was very sweet. Apparently it scared a lot of people, not just us. 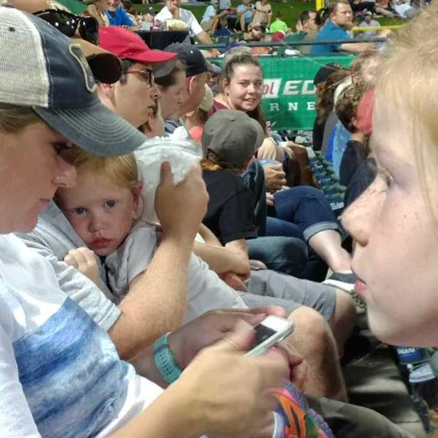 This picture looks like I couldn't care less she's hurt but I was calling my mom because I tell her everything the moment it happens. Her little face breaks my heart.
The good news is, we got the foul ball that tried to kill her! And this picture is soooooo sad. But today she's carrying it around like a souvenir and keeps asking to play baseball, so it must not have turned her off to the sport entirely.
After the excitement settled down and my adrenaline emptied, I realized that I was in excruciating pain in my ligaments. It just kept getting worse and worse and I realized that my running after Cory and B was absolutely not a good idea -- even though it was instinct and I wouldn't have done anything differently.
We were able to enjoy the rest of the game (it was tied for 6 innings and the Bee's won in the bottom of the 9th with a home run!!) and there were fireworks afterward which everyone enjoyed; except Allison who got really scared by them. I felt bad. We had ash raining down on us so Kennedy pulled out her safety glasses. Once we stood up to leave though I was met with ripping, shooting pain through my hips and groin and knew I was in trouble. Luckily we had parked really close and the walk wasn't that long, but I could barely even get in the car.
We got home and I could hardly walk into the house. We got the kids ready for bed and noticed B was having issues keeping her balance. We were really worried but it was also 11:00pm and she was exhausted so we decided to see how she was in the morning.
I tried getting into our bed and started sobbing with the amount of pain I was in. I couldn't roll over or move my legs in the slightest without horrible, horrible pain. With Cory's help I was able to find a tolerable position and tried to fall asleep.
Neither of us slept well last night. We were both so worried about Brynlie and Cory kept checking on her. I was hurting all night long. I tried getting up at 3 am to use the restroom and couldn't walk without heavily holding on to our bed and furniture. It took me 5 minutes to go 10 feet. No joke.
Brynlie seems ok today. Her head is very tender but mentally she's acting totally normal and her balance seems to be back. She's had such a rough summer, but through everything so far she's been protected because it could have been so much worse!!
I, however, am still in tons of pain. I can barely walk around the house. Tylenol helps me walk without support but it still hurts a lot and I have to walk super slow. As soon as it wears off I can barely move. We were supposed to speak in sacrament meeting today and I didn't think I could even make it to the building, much less the pulpit. Cory gave me a blessing and I was able to give my talk but the pain hasn't subsided.
I am hoping that Brynlie continues to be ok and that my pain is just soreness that will heal over the next few days and not actual damage that will be here for the rest of this pregnancy. Not being able to walk is kind of a big deal. I'll keep you updated.
Overall we had a great time at the game and now we have a pretty crazy story to tell. I'm so glad it wasn't worse. I'm pretty sure we're going to put her in a helmet and wrap her in bubble wrap for the duration of her life though. I'm sick of close calls. I can't take the stress.
See you soon!
Posted by Megan and Cory at 5:43 PM