We decided we really needed a family day. We haven't gone to do something together, just us, in a while. There is a ranch close by that was hosting a baby animal festival and we decided to check it out and surprise the girls.
The first thing we saw were the baby goats. This was so much fun!! I've never wanted a baby goat so bad in all my life! 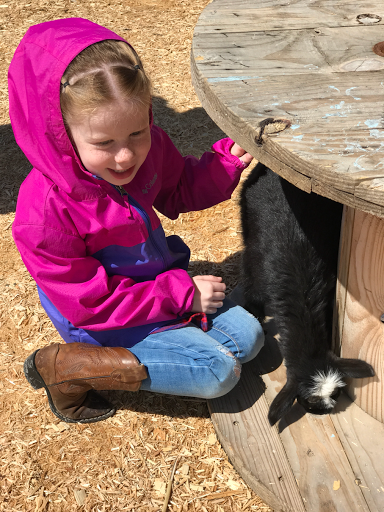 Brynlie kept trying to pick them up, and she was fast enough to do it, so she needed some supervision. 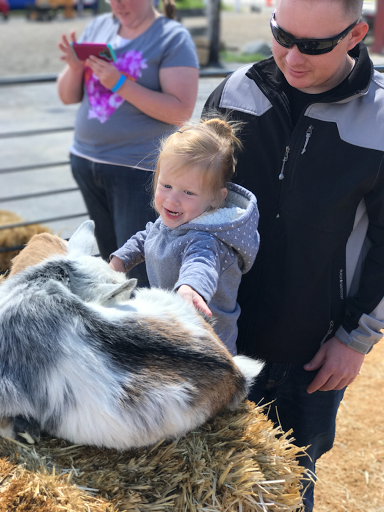 Kennedy fell in love with this little guy. 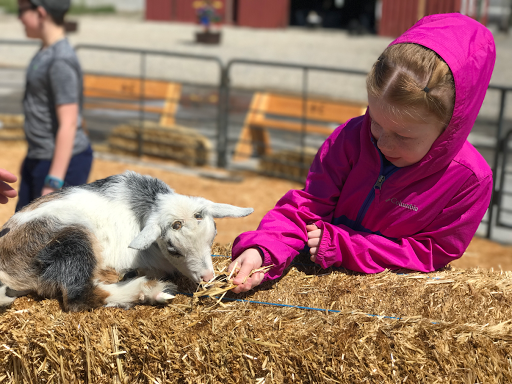 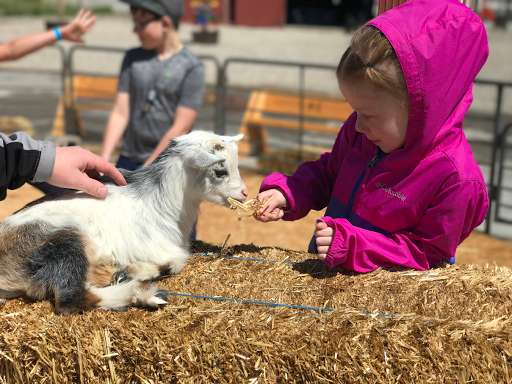 I tried to talk Cory into letting us get one some day. He said no. 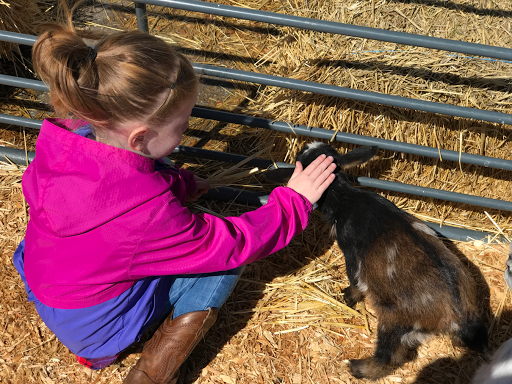 Next up was the baby chicks. These were by far my favorite and that completely caught me off guard. I think chickens are super disgusting once they're big, but when they're a day old and yellow, fluffy, and teeny, I can't get enough of them! 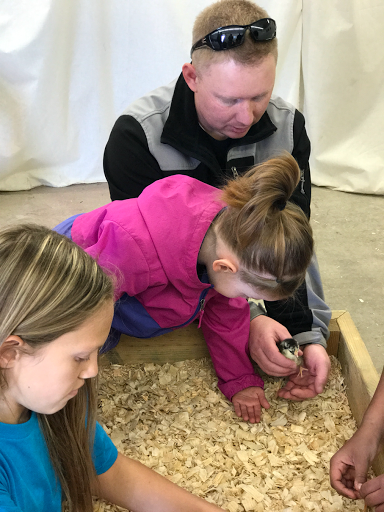 I only have one picture of the girls cause I couldn't stop holding them. 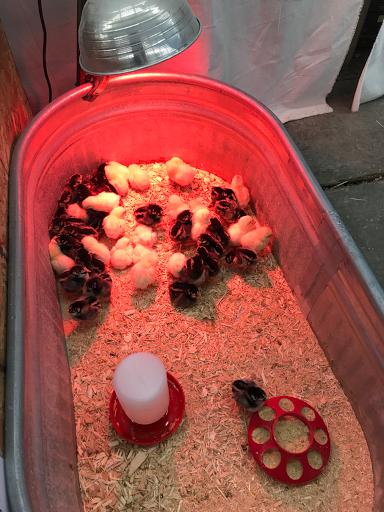 Why does everything have to grow up and get bigger? Can't they stay adorable forever?!
Next, bunnies. 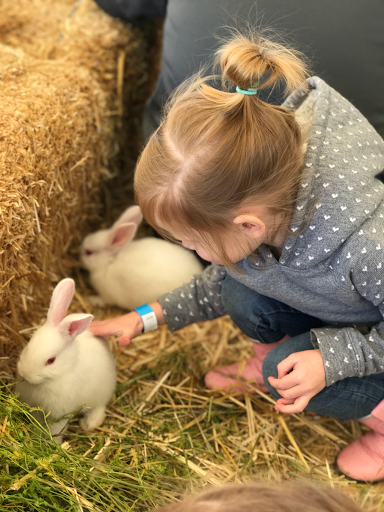 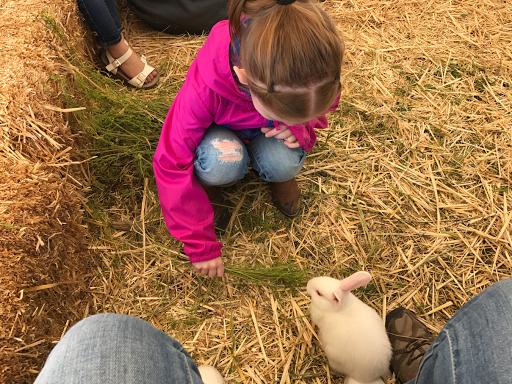 And then they noticed the jump pad and baby animals couldn't have been lower on their priority list. 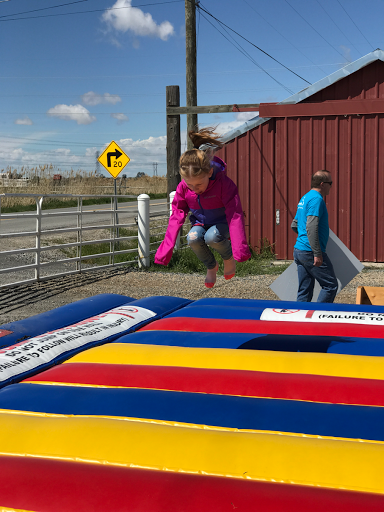 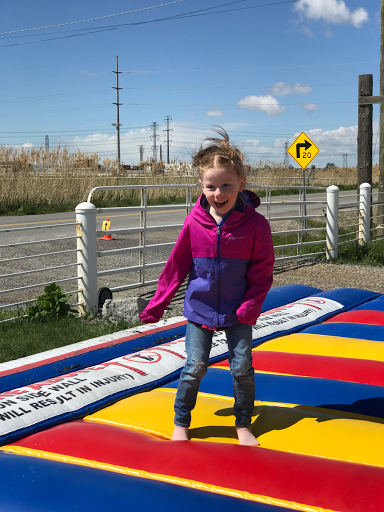 Brynlie also had a stellar time contrary to her face. We actually had major trouble getting her off. 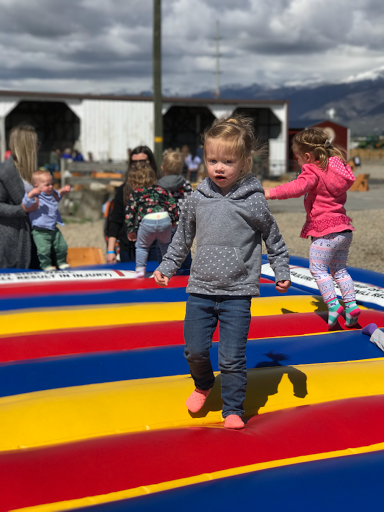 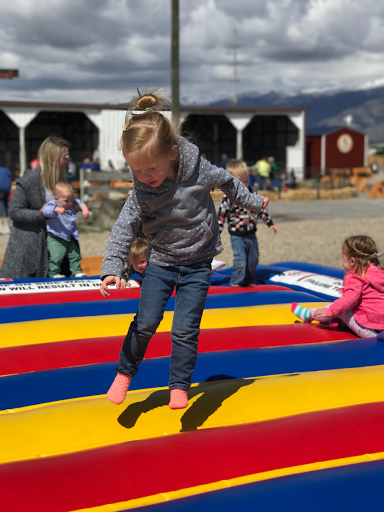 The same goes for the little wagon ride. 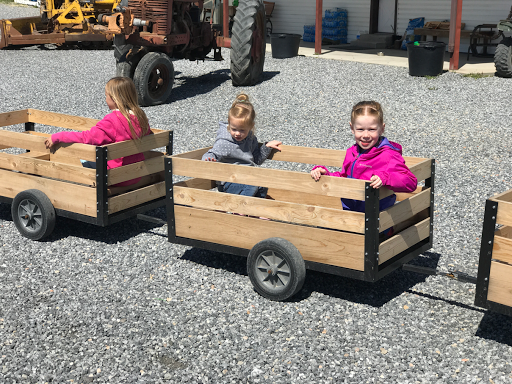 Just a little reminder that if you're having a bad mom day, it could always be worse. 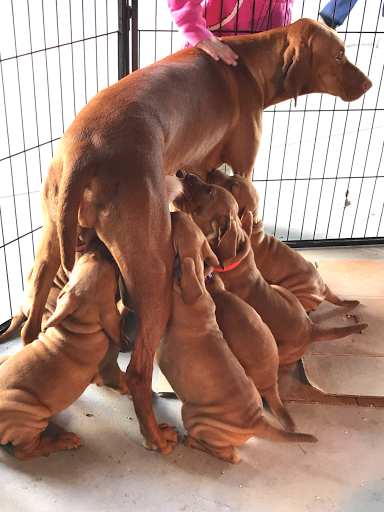 We practically ripped the girls out of playing in the corn pit to get on the hay ride before it left. Cory was running with Kennedy in his arms and trying to dump corn out of her boots on the way over. We made quite the spectacle - a little pre-hay ride show, if you will. The best part is once we got on we didn't leave for another 8 minutes or so. #facepalm 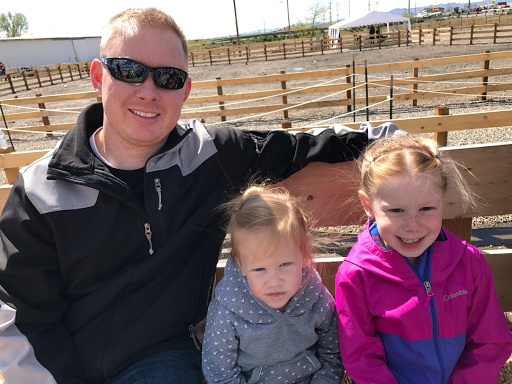 We've really got to work on B's picture face. 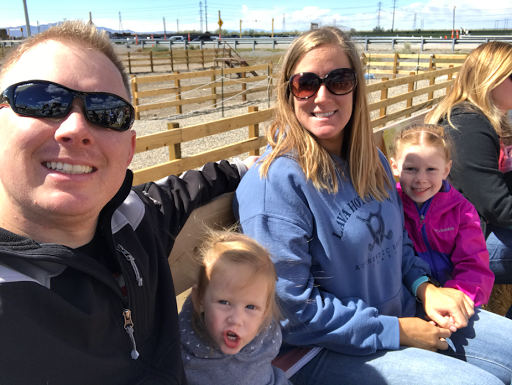 After the hay ride we saw more animals, got fresh made donuts that put us in a sugar coma, and bought some farm fresh ground beef that I can't WAIT to try! And then, just like flipping a switch, Kennedy was tired and done and the fun was over. So over. 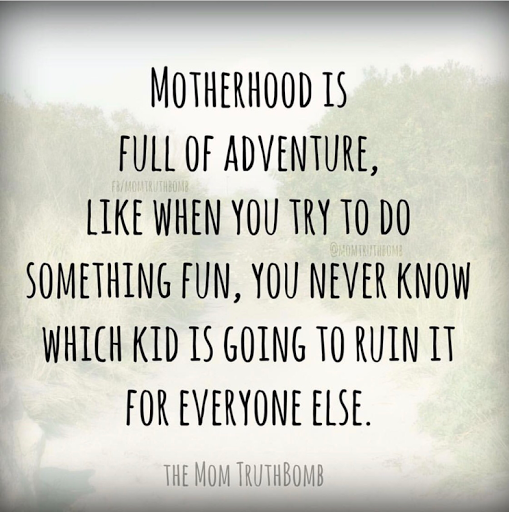 We left with her in tears and screaming, but we sure did have a great time. I really wanted them to have a horse ride, but I guess they only do those on Saturday's, so that made me sad. Next time I guess. If you're a southern Davis County or Salt Lake County local, check out Cross E Ranch. They are the nicest people I've ever met and it was a lot of fun.
And lastly, a baby update**
I'm halfway through this pregnancy now and last week, my ligament (pubic symphasis) pain came back. I was really distraught the first day and had Cory give me a blessing. He didn't say a word about the pain going away even though I could tell he wanted to. Instead he blessed me with the strength to get through the pregnancy and the ability to keep working out to keep me and the baby healthy.
I was upset at first, but I also figured if I was blessed to be able to keep exercising, then at least this time I could keep trying and not be confined to the house all the time, which is what really caused deep depression last time. If I'm going to be in pain either way, I don't see how strengthening muscles around the weak ligaments could possibly make things worse, right? But it also means NO RUNNING. At all.
I know the pain will just get worse as the little guy grows so I'm pretty scared. But I don't really have a choice but to charge through it at this point. I want a baby boy, even if getting him here will be hell. Currently Tylenol helps take the sharp pain edge off so that's helpful. We'll see how long it lasts. This has completely solidified our decision that this is our last baby though. Not that we had doubts before, but this was the icing on the concrete cake.
So there you go! We have our big ultrasound in a couple weeks and I'm hoping to get some really good pictures to share. All our previous ones haven't been that great. He's a very active little guy so far and I'm excited to get a closer look and have another person hopefully confirm that it really is a boy haha.
See you, soon!
Posted by Megan and Cory at 9:17 AM