Well, we can kiss a healthy pregnancy goodbye. At least a healthy first trimester.
Other than one major episode with needing Sour Skittles like I needed air, I never got any serious cravings while being pregnant with the other two. But this baby is killing me! I've had a Coke almost every day since the Jazz game. I don't even have words for how ashamed I am of that. 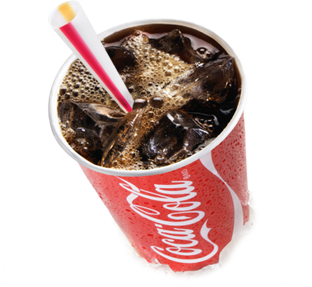 I know that sounds a bit dramatic, but I'm serious. 10 years is a long time to go without this horrible stuff. I've done a very fine job brainwashing my girls that soda is bad for you (sorry guys, but it is..) so they always look at me like I'm sinning every time I get one, and I feel like I'm sinning.
But I can't deny how much better it makes me feel. I'm seriously a new person after I've had one. My stomach feels better, the caffeine helps me actually be able to move around... crap gets DONE when I have some Coke in my system. And Coke does some serious crap to my system as well. I feel tons better for a while, then it gives me bubbly swamp stomach and usually ends up cleaning out my digestive system. Everyone keeps telling me my body will eventually get used to it, but I don't want my body to get used to pop again. That's the whole point!! Ah! I'm trying really hard to either not drink it or only have one 8oz serving a day. Nothing major. I'm 9 weeks now. Hopefully only a few more weeks of this nausea crap and I can start my sober days count over again.
The other thing that has been a major craving and has been helping me feel a little better are these: 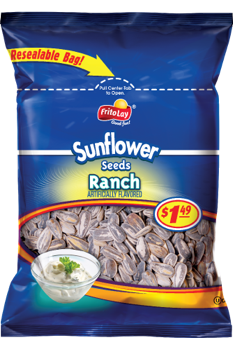 They're high in fat and calories, but they also have a decent amount of protein and I think that's why they've helped. Protein and I aren't getting along. And let's get real -- I'm going to get really fat no matter what, so what's more fat and calories? Haha
Fingers crossed the second trimester is much, much easier for me diet wise. Ugh, I am not a fan of pregnancy.
But I am a fan of these two so at least there's an amazing outcome for 9 months of torture. 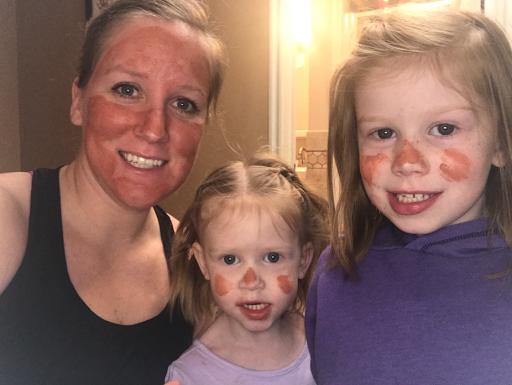 They wanted to try my face mask last night so we had a little facial session before we all showered and went to bed. Kennedy kept saying hers itched and Brynlie kept poking her finger in it and trying to eat it. Maybe next time we'll try egg yolks so it's more "organic".
Oh my sweet, sweet Kennedy... the other night we watched Brave before bed and she was scared to go to sleep. I have no idea how Harry Potter doesn't phase her but Brave gives her nightmares?? Anyway, I turned on a lullaby song from my old phone and left it playing on repeat softly as they fell asleep. It did the trick!! And she has listened to that song probably a million times since then, including every night. Yesterday she tucked her doggy in for a nap and left it playing next to it. 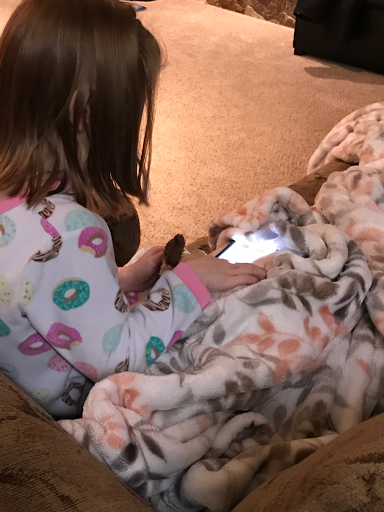 She actually did the same for me today as well when I fell asleep for about 20 minutes on the couch. She has such a huge heart and is so caring and thoughtful of others. It makes me sob when I think about it. I admire her so much and I know as she gets older people are going to take advantage of that huge heart and she's going to get hurt. That kills me inside. I want to protect her from any kind of pain. But I also know she's going to meet people who are deserving of her love and they're going to be the luckiest on earth.
I struggle with Kennedy sometimes, though. For over a year now I've been really concerned about her inability to stay focused on anything. She needs constant reminding to get any task done. She gets so easily distracted and she spaces out pretty much all the time. It's affecting her school performance and has really been weighing on me. She's so smart, she just struggles to focus on anything. Homework has become a huge battle as well. 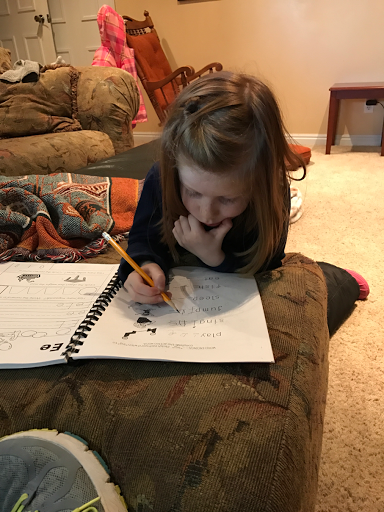 I'm not waiting too long to get her some help though like I did with her speech. We see her pediatrician next week to discuss what's going on. I love her so much and I want her to succeed and feel confident in her abilities. She's such a special girl. I feel so horrible that she has been given all these academic hurdles to get through, but she's doing amazing with the challenges she's been given.
Tonight the girls and I are watching more Harry Potter and then we're all going to bed early. It's been a long and tiring day. Heck, it's been a long and tiring week. We. Need. Sleep.
See you, soon.
Posted by Megan and Cory at 6:50 PM