Two Weeks of Everything With Lots of Pictures


I've been having a pretty crazy couple of weeks. I have been super busy and just couldn't seem to find time to blog. I've barely even texted anyone or been on social media. It's been great for my phone battery life haha. So, let's play major catch up in no particular order.


Our kitchen cabinets are measured and ordered and being built right now. They should be ready the end of November, assuming we are ready to have them installed. We're having trouble finding a drywall person who isn't super busy. Anyone have any great recommendations for someone who can tape, mud, and sand for us in the Wasatch Front? Anyway, we went with white shaker-style cabinets. That's really "in" right now and since our kitchen isn't super big the white will make it feel bigger and more open (says HGTV). Plus it's super easy to match and I love how bright it'll be. I spent a while trying to decide between oil-rubbed bronze hardware or brushed nickel. We have oil-rubbed bronze everywhere else, but I just didn't love the look. 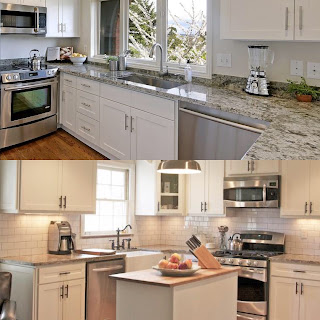 So we will be going with brushed nickel (the top pic) in the kitchen and have things be mismatched a little bit. As long as the faucet is brushed nickel also, I think it'll be fine. It's getting me so excited! I'm also starting to pick out colors for rooms and tile and design things. It's been really exciting but also part of why I've been so busy.


This past week was safety week at Kennedy's school and they got to dress up for each day. Her favorite was super hero day. Although I got quite a lecture when I picked her up that wearing a cape with her backpack was not a good idea. 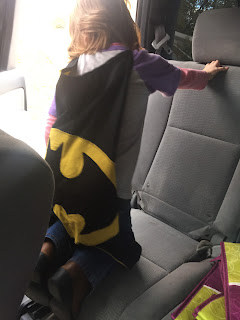 My life has forever been changed for the better, you guys!! A while ago our local Walmart started doing online grocery ordering. You order your groceries online, a store employee finds them for you, then you select a designated pick up time and you just drive up to the door and they load them in the car for you. It sounded amazing, but I don't typically shop at Walmart, so I never got to try it. But last week, my Smiths, where I do shop, started the same thing!! I tried it last week and almost cried!!! 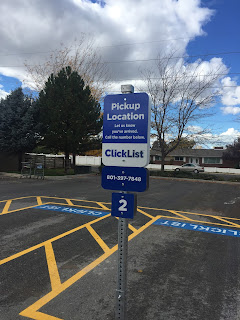 I don't even have words for how much I hate grocery shopping with the kids and I think many people can agree with me there. It always makes me so freaking cranky. Plus it takes forever. This took me 10 minutes and I actually went home in a good mood!! Everything they picked was perfect, and I saved loads of money because I wasn't walking through the store making impulse buys. I will for sure be using this every week! They even gave me a gift bag for my first time. 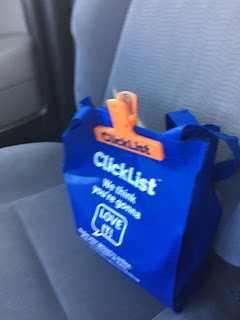 I had a follow up appointment with my doctor this past week about my PCOS stuff. She was glad that most of my symptoms are improving, but couldn't understand why I still can't lose weight. Join the club, lady!! It has been a serious struggle, but it is what it is. She did make a couple changes to my medications to see if it'll help but my hopes are very minimal at this point. We did have a more detailed discussion about how dairy affects insulin. She said as long as the dairy has high protein (like Greek yogurt or the milk I've been drinking) then it won't spike my insulin levels. A glass of regular milk would, because it doesn't have enough protein to balance out the sugar. That made my day, because without those things I've been really struggling to get enough protein.


While at the appointment I started to get a very, very bad tension headache. These come around once a month... if you catch my drift... but every once in a while I get a seriously terrible one that makes me nauseated and impairs my vision and ability to think. It's not a migraine I don't think, because it doesn't hurt in the places migraines normally do, but they suck. Caffeine can help knock it out in the early stages along with lots of medicine, so I stopped at the Maverick right next to the office which happens to be where my brother in law is a manager, and begged him to find me something to drink with caffeine that wasn't carbonated. The only option that wasn't coffee was this and it was gross. But it did the trick even though I didn't even make it through half of it. 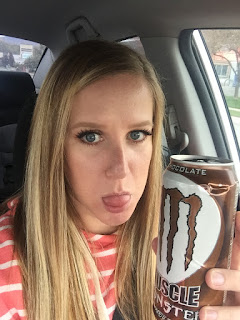 I was feeling better and able to help Cory with stuff on the house. But then someone got tired and my help was limited. 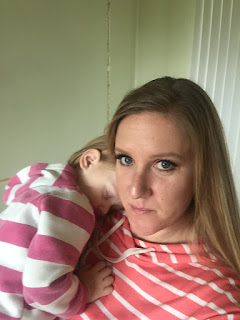 Yesterday I ran the Salt Lake Haunted Half Marathon, so I guess I had better give you a recap on that as well. The last time I ran a Halloween race was when I was pregnant with Brynlie and that was a disaster, so I was hoping for a better outcome. The race is now run by Runtastic, and they do a great job. We had some seriously cool stuff in our bags; awesome shirts, gloves, KT tape samples (the Pro kind which is bomb!) and even sunglasses! 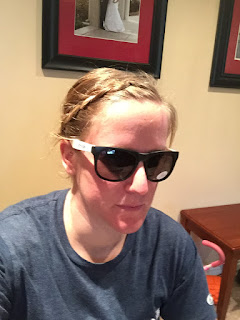 The race was well organized and it was tons of fun. It didn't start until 8:30 so the bus pickup wasn't grossly early. They had fire pits and hot chocolate at the start line even though it wasn't that cold. There was a DJ also which made it super cool. I was so pumped for my costume!! I was a strip of bacon and had a name tag that said Kevin. 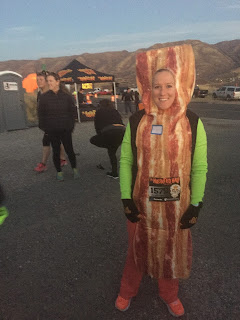 A lot of people couldn't see my name tag but still loved it anyway. I had a few people ask to take a picture with me, several just took them as I walked past or snuck up and snapped one then ran away, and tons and tons of people told me how much they loved my costume. Everywhere I went I heard everyone saying "bacon" over and over again. It was awesome. There was a costume contest for a $100 gift card for running shoes. I felt like I had a really great chance of winning. I was waiting in line to get on stage and then right before my turn the lady announced they weren't going to accept any more contestants! I was so mad because the people who were up there didn't have that great of costumes, which means I totally could have won!!! Oh well. 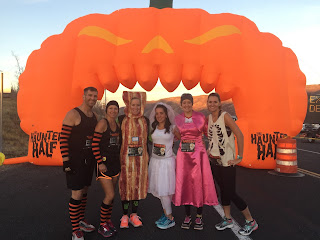 The girl in the bride costume actually got married later that day! She is an amazingly strong runner and super fast.


At 8:30 the headless horseman started the race and we were off! Running in a bacon suit was not the best idea I've ever had as far as keeping myself cool. It got really hot!! But any spectator I passed gave an extra cheer for the bacon because who doesn't love bacon?? So that part was fun!


I started out really strong and felt great. The pace my friend and I were keeping was faster than my past races and I was feeling good. We took a brief break at mile 8 to put in headphones and take more fuel, and as soon as we started up again I started to feel really weird. I was dizzy and disoriented and just felt really crappy all the sudden. My energy level plummeted and I was struggling to maintain the pace we had kept. My stomach started to hurt more and more and I got hotter and hotter as my head started to pound all over. I tried taking off the bacon suit which helped for about 2 minutes and then I felt terrible again. Michelle ran on ahead as I felt like I was going to die. I had plenty of water the few days leading up to the race, I was fueling like I always do... I didn't know what the deal was. Mile 11 was where the crap hit the fan and I tossed my cookies in one of the aid station garbage cans. It wasn't much, and I felt slightly better afterward, so I kept going. About 3/4 of a mile later I threw up again but this time just in my mouth. The last few miles were really rough and I walked a lot in an effort to not pass out. The last mile of the race was BRUTAL for me, and it also had some really steep hills which did not help. I finally finished in a blur, found some water and crashed on the cold, wet grass. Michelle brought me a wet towel and a Creamie, and I laid there until my head stopped pounding and I could look around without getting dizzy. But man did my stomach HURT!


After a while I started to feel better and I slowly licked my Creamie to help cool me down. We picked up our bags and got a picture of the Headless Horseman 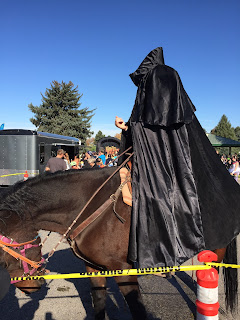 And a couple finish pictures 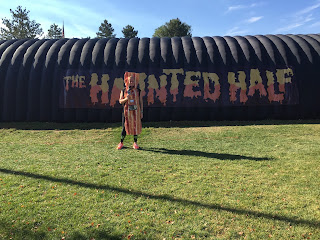 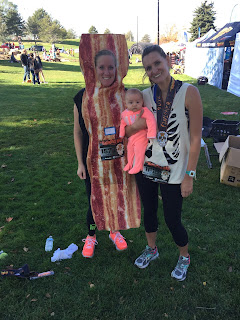 I made it home feeling ok, but then was so sick for hours and hours after. My stomach hasn't hurt that bad for a long time!


Except for getting sick I thought the race was tons of fun. The weather was awesome, the crowds were great, and the medals were way cool! The course was also great, except for the last mile through Sugar House Park. It didn't go on any major roads with lots of traffic which was so nice! I would definitely do it again!


Last night we also celebrated Allison's first birthday!!! Can you believe it's been a year since she dramatically entered this world? 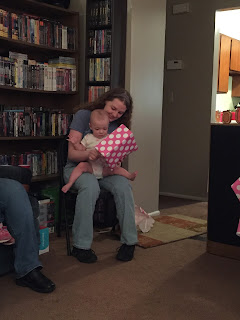 She is getting so big and doing so well! She started crawling this weekend, too, which is so fun! She is a happy, easy baby and we love her so much! 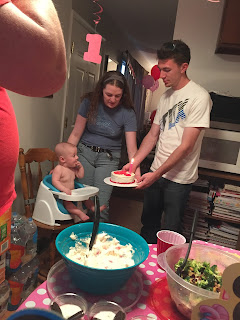 Yesterday the girls got to play in the gargantuan amount of leaves we have in my parents backyard. After the race I helped my mom gather these up and mowed the lawn before I showered. There was an insane amount and there's still tons that need to fall! Kennedy has been waiting to do this for a long time. I'm glad she finally got that chance. 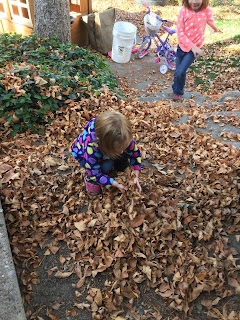 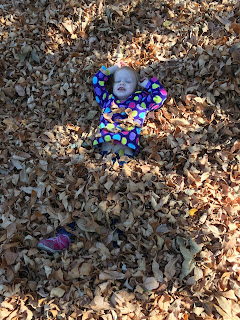 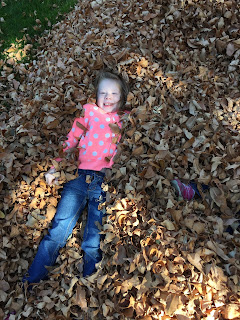 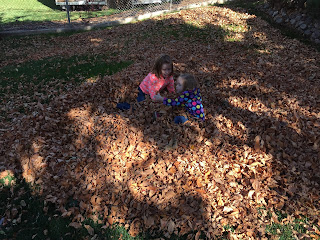 And lastly, here's a couple cute pics of B. Enjoy and I'll see you, soon! 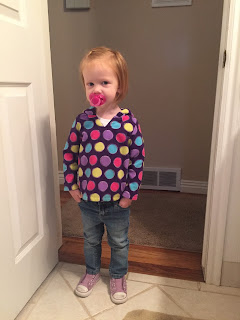 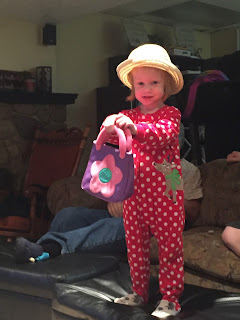 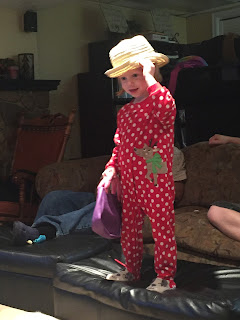