Cough, Cough, and A Recipe!

Tuesday I started getting a weird cough. I haven't been sick with anything else, nor have I felt sick since, but I'm hacking up a lung every once in a while. It's super annoying and not getting any better yet. I'm hoping it decides to take a hike soon. The timing couldn't be worse! Ok, it could. But it's highly inconvenient! Anybody know of any illnesses going around where it's just a cough? I would understand if I had been experiencing nasal congestion or something but I haven't. So strange.


I was sent this picture this morning from one of our daycare girls at the gym. She is AMAZING with the kids. Well, they all are, but she really goes above and beyond. They were playing with Snap Chat and if you've ever had a conversation with Kennedy, you know this fits her perfectly. 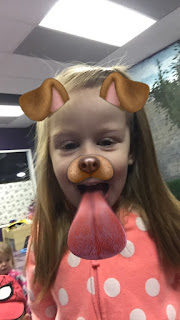 When she's feeling extra shy, she will pretend to be a doggy and just bark at people. So this was spot on. I'm so glad my kids love going there!


Today wasn't that special. Kind of like every day. It was a pretty boring St. Patrick's Day. I spent 25 minutes attempting to make a clover out of Kennedy's hair that didn't turn out so we were almost late for school.We did wear green, except for Brynlie who I realized today doesn't own a single green thing. We don't do the whole leprechaun thing at our house. At least not yet. I don't see the need to over-celebrate yet another holiday where I have  buy my kids things they won't ever play with. I can see that changing in the future when they start school and all the kids of Pinterest-Mom's start talking about it and my kids come home asking why their mom sucks. But until then, I'm fine with sucking.


I felt pretty good this morning so I decided to go to the gym after we dropped Kennedy off. I worked my shoulders and abs in the weight room, but when it was time for class to start, I looked at the board and decided I was too tired and didn't want to aggravate my cough. So I grabbed Brynlie and went to the running store.


I spent quite a bit of time talking to one of the employees about a different kind of fuel that I CANNOT wait to try out. I don't want to talk about it yet until I've tested it out but it sounds phenomenal. I also bought a new pair of running socks. I usually wear my compression socks for long runs but my short run shocks are getting holes. I opted for wool socks which I've never tried but the lady said they are antimicrobial and won't stink and don't have to be washed until after a few uses. Less laundry? SOLD!


Target is very dangerous for me. I think most moms can agree. We went in for cough medicine and came out with much, much more. I realized when we walked in that we didn't have any Easter stuff so I had to buy all that since we need to take it to Moab with us. Then I remembered Brynlie doesn't have any short sleeve shirts... Then I remembered I didn't either... Then I saw their buy one get one 50% off shoe sale... It was bad. But the t-shirts I found for myself are flipping COMFY! I'm going to have to go back for more colors. And they're only $9. It's on my to-do list tomorrow.


I was supposed to get my hair done today but my friend cancelled. Hopefully tomorrow is the day! I'm so excited for a change! Stay tuned!


We picked up Kennedy and came home and unpacked all the crap I bought. Then Brynlie had a nap and I took a short one to try and help my body get better faster and ended up smearing mascara all over my freshly washed pillow case. I HATE that!!


So Brynlie asked to go potty again today. She didn't go (again) but doesn't she look so darn grown up?! 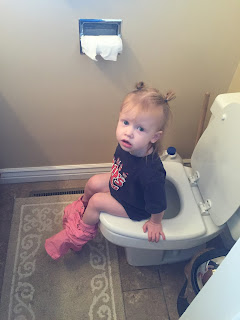 She is such a doll face.

You know you're lazy when you're sitting 5 feet away from your mom and you text her a picture to show her instead of getting up and handing your phone to her. I'm not ashamed. 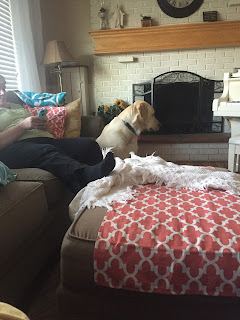 Dinner tonight was simple. BBQ chicken, roasted potatoes, and corn. I am in love with purple potatoes but those suckers are expensive (3.99 lb) so I don't buy them that often. I kind of feel like it was inspiration to buy them Monday because they have a ton more vitamins and minerals for the body than regular potatoes which I'm sure my body needs right now. 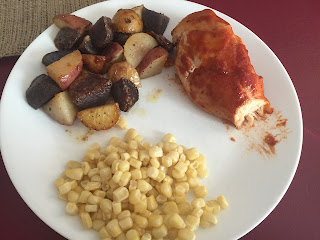 The girls enjoyed dinner, too. Or at least Brynlie had a blast feeding Kennedy her food (I love the open mouth) 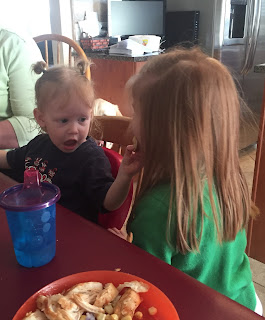 That is, until Kennedy left spit all over her hand. 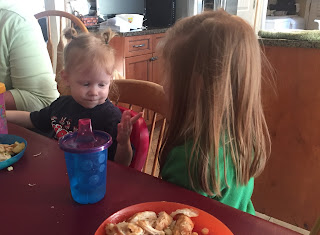 I'm feeling pretty adult tonight because I washed and dried our dishes. Since we don't have a dishwasher in my parents basement, we usually just wash them and then put our architectural skills to the test by building a massive tower of dishes and letting them air dry. Then we slowly dismantle our creation as the days go on picking dishes off the tower to use. 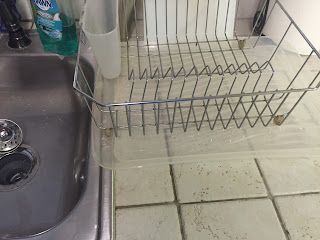 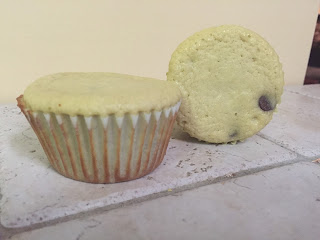 I don't know who to credit for this recipe because I got it off a chick on Instagram, who got it off another chick, who got it off someone else... but just know that it wasn't my culinary skills that came up with these.

In a large bowl combine a 1/2 cup coconut flour, 1 tsp baking powder, and 1 scoop of protein powder. When I first made these I tried chocolate protein powder and they were awful. My mom grabbed one without knowing what they were and spit it right back out. They were bad. But since then I've used vanilla flavor and they've been way, way better. I use this protein I found at Costco 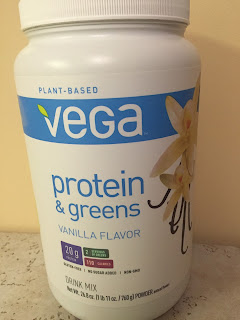 This protein is super nasty in shakes, in my opinion, but it has been awesome to bake with! It does have a really great flavor, it's just very grainy, which gets lost in baking and pancakes. So I recommend it for that. Anyway...

Mix all dry ingredients well and make sure all the clumps are worked out. Now add 1/2 cup of plain Greek yogurt (I use vanilla sometimes and they're yummy as well), 2 whole eggs, and 1.5 cups of egg whites (from a carton) 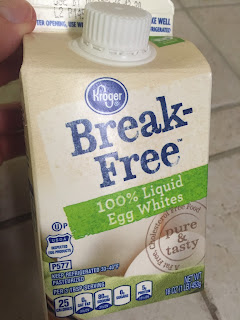 Make sure they're 100% egg whites. Blend all ingredients well with a mixer and pour into muffin tins and bake for 20 minutes. One batch should make 12 muffins. They do stick pretty easily to the pan so I like to use paper muffin cups to make it easier on myself. Let them cool and refrigerate leftovers. These really do taste great, and I like to add some chocolate chips to mine so I feel like I'm having a desert. The stats on them are: (I don't count the chocolate chips)
1 muffin
calories: 60
fat: 1.5g
carbs: 3g
protein: 7.5g

I make these as my go-to snack. Whenever we go straight to work from the gym I always make sure I have a few of these with me to refuel with. I love them! Let me know if you try them!


*Today's honorable mention*
I killed a spider in the bathroom and I didn't even scream.
Posted by Megan and Cory at 8:36 PM