7 months ago my little brother and his wife lost their first child at 22 weeks of pregnancy. It was horrible and heartbreaking and we still feel the pain and sorrow of that day.

My sister in law, Natalie, was able to get pregnant again right away -- a month after losing him, in fact. As of this week she is 25 weeks along.

Wednesday night she started having labor pains and bleeding again; the same kind as with her first one. This time she knew what it meant and her and my brother went to LDS Hospital to get it checked out. My brother had called my mom to tell her they were going in, but lost reception as he was walking into the emergency room and we were cut off before getting any real info. My mom and I were worried and after about 15 minutes of waiting for info, decided to head over to the hospital because we had no idea how long it would be before we would hear from my brother.

We arrived at the hospital and they told us what room she was in. We found the room and it was filled with doctors and nurses, a couple coming and going in a hurry. But blaring from the room was Baby Allison's heartbeat on the fetal monitor; she was still alive. We breathed a small sigh of relief but it was obviously too hectic to go in the room or get an update from anyone. We sat in the waiting area just outside her room and heard my brother ask, "Do I get to go in the helicopter, too?'

My mom and I looked at each other in shock and sure enough, down the hall came the life flight team with their gurney, all dressed in red, carrying big scary-looking equipment, just like you would see in the movies. We still had no idea what was happening at this point so seeing this really jostled our emotions. We had trouble keeping it together but wanted to stay strong for them, whenever we got to see them.

Finally a nurse came out and looked at us sitting there. We must have looked beyond sickly worried because she came over and updated us that Natalie was in labor, she was dilated, and they were sending her to IMC in Murray as quickly as possible because their NICU was better equipped to handle a baby that early. Shortly after they wheeled Natalie out and her and Collin left with their team to the roof to take off. We stayed in the waiting area because Collin wasn't allowed to ride and we were going to take him down to Murray because he was WAY too frazzled to be driving. 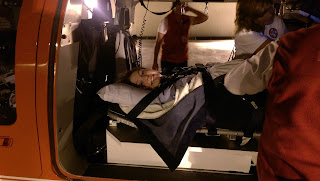 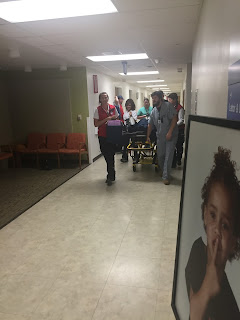 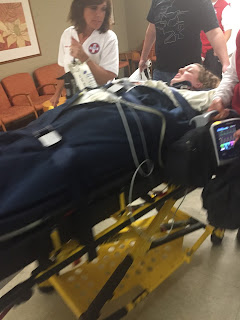 After they wheeled her away and it was quiet again we both lost control and started crying. It was so scary and surreal and they had just gone through this 7 months ago. The second my brother called my mom I went into my room and dropped to my knees to beg and plead with Heavenly Father to not do this to them again. I started doing the same thing in my heart in the hallway of that hospital. It was overwhelming and I was so scared for them.

A sweet nurse came over to us and told us they had the best team with them and the survival rate at 25 weeks was much higher than 22 and she hoped it would be ok. She helped comfort my mom and I quite a bit.

Finally Collin returned from the roof and my mom took him to the hospital while I followed them in Natalie's car.

Once we got to IMC, there was a whole lot of information. The doctors seemed pretty sure she was going to deliver sometime in the next 24 hours so they had the NICU doctor come talk to them about what to except with a baby this early, Allison was breach so they were planning a c-section and explained what would happen, they pumped Natalie full of drugs and shots to slow labor, help with the pain, help Allison's heart and lungs develop if she was born... it was crazy. Natalie was dilated and the baby and the amniotic sack were exposed, but they were trying to prevent anything else from happening.

After a scary 24 hours, they were able to stop labor all together. Her team of doctors were amazed she was doing so well. Shes at a high risk of infection because the baby is so exposed and her water could break any moment and they would have to deliver. Thanks to the many prayers in their behalf, Natalie is still pregnant. She has to stay on bed rest in the hospital to try and keep her pregnant for as long as possible and keep her away from infection, if possible. NO ONE expected her to do so well, so it's been nothing short of a miracle. They've moved her to a different floor where she will now reside. The best outcome would be for her to stay pregnant until 35 weeks, but they aren't sure she will make it past 30. Either way, we are so grateful for each day she stays pregnant so Allison can grow and develop and come out healthy and whole.

They could still use some prayers that everything goes well, if you have any to spare. And thank you for the ones already offered. Hopefully the terror of this situation will turn into a good story to tell in the end. I will keep the blog updated as things progress. In this case, no news is good news.
Posted by Megan and Cory at 1:34 PM