I guess one good thing came from the national attention those guys pushing over the rocks in Goblin Valley State Park received; no one used to have any idea where it was when I would say we were going there. Now they all know it as, "the place where those guys pushed that rock over."

Thanks, guys. You've really put it on the map. *wink*

Anyway, so we went camping in Goblin Valley last weekend. It was awesome. The weather was great for the most part, Brynlie was an angel, Kennedy had a blast, Cory got to tinker, and I got a s'more. Everyone was a winner.

We arrived Friday afternoon and just lazily sat around camp and marveled at the amount of children camped in the group spot next to us. It was like a swarm of bee's.

We'll skip over the first night and how horribly Brynlie slept; or didn't sleep for that matter...

Saturday morning I awoke before the sun to this scene outside the trailer: 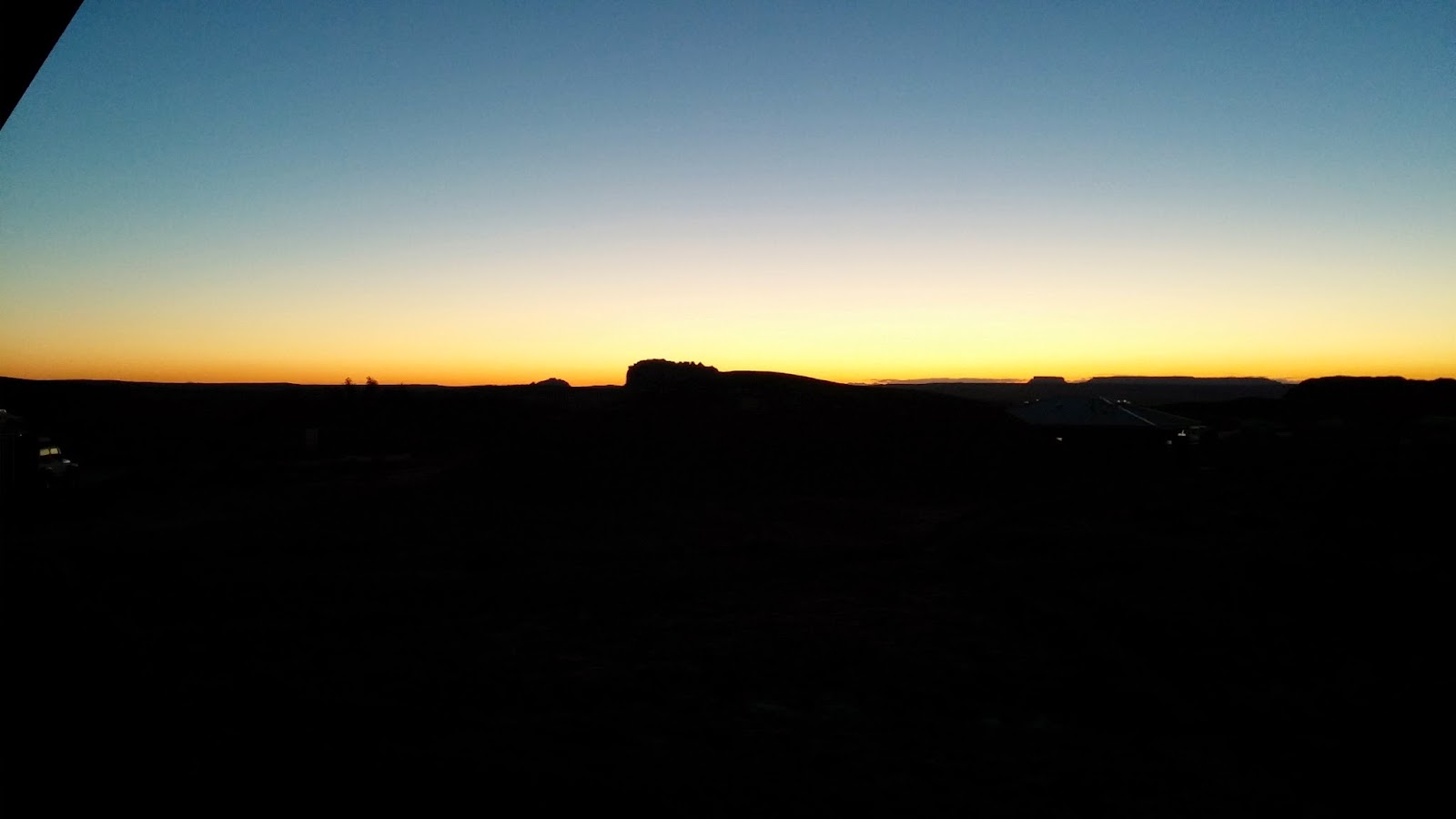 I'm still trying out this whole running again thing (more on that in another post) so I decided to go for a run. Running is still somewhat challenging for me but it's getting better. And the view couldn't be beat 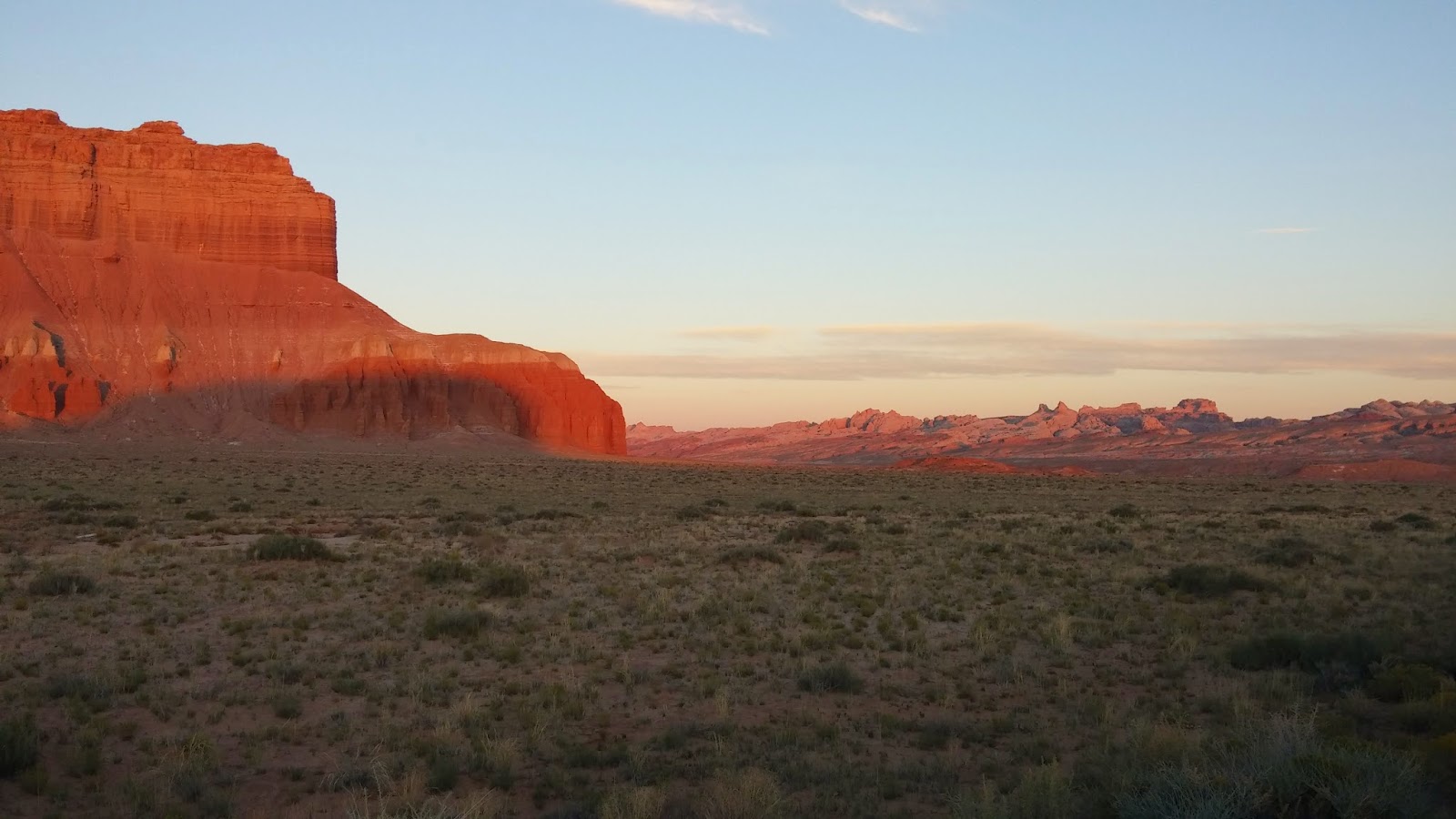 I made it 4 miles without stopping, which is pretty impressive considering the entire 2 miles back were uphill. I'm a major hill-wimp. It's something I'm hoping to overcome soon. I listened to Fall Out Boy the whole run which helped push me through it. I've really been practicing building my mental strength and not giving up when I still can give so much more. I've made big strides. Again, more on that later.

After the run we had breakfast and went and hiked Little Wild Horse Canyon. It was another 4 miles on my feet but oh so fun. It's one of my favorite hikes. Brynlie was super jazzed to go 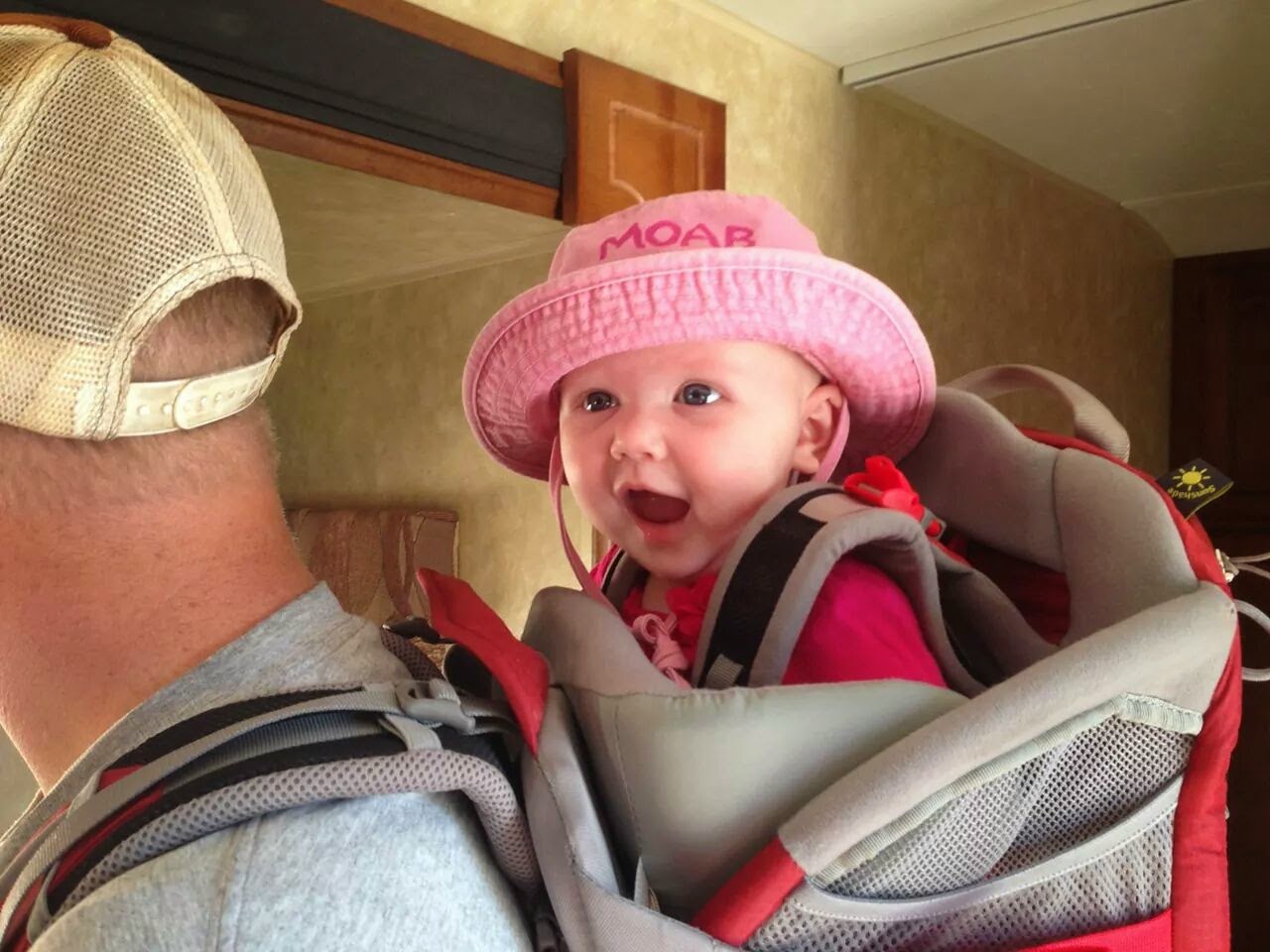 Being able to hold your own head up sure has it's perks. She did awesome in the hiking pack. Like she had a choice...

We had a slight mix up which resulted in no hiking pack for Kennedy, so she walked the whole thing. She was a champion hiker and was obsessed with scaling every single rock on her own without help. She wore herself out towards the end though and just started bawling and Cory carried her on his shoulders the rest of the way. He's a pretty fantastic Dad. 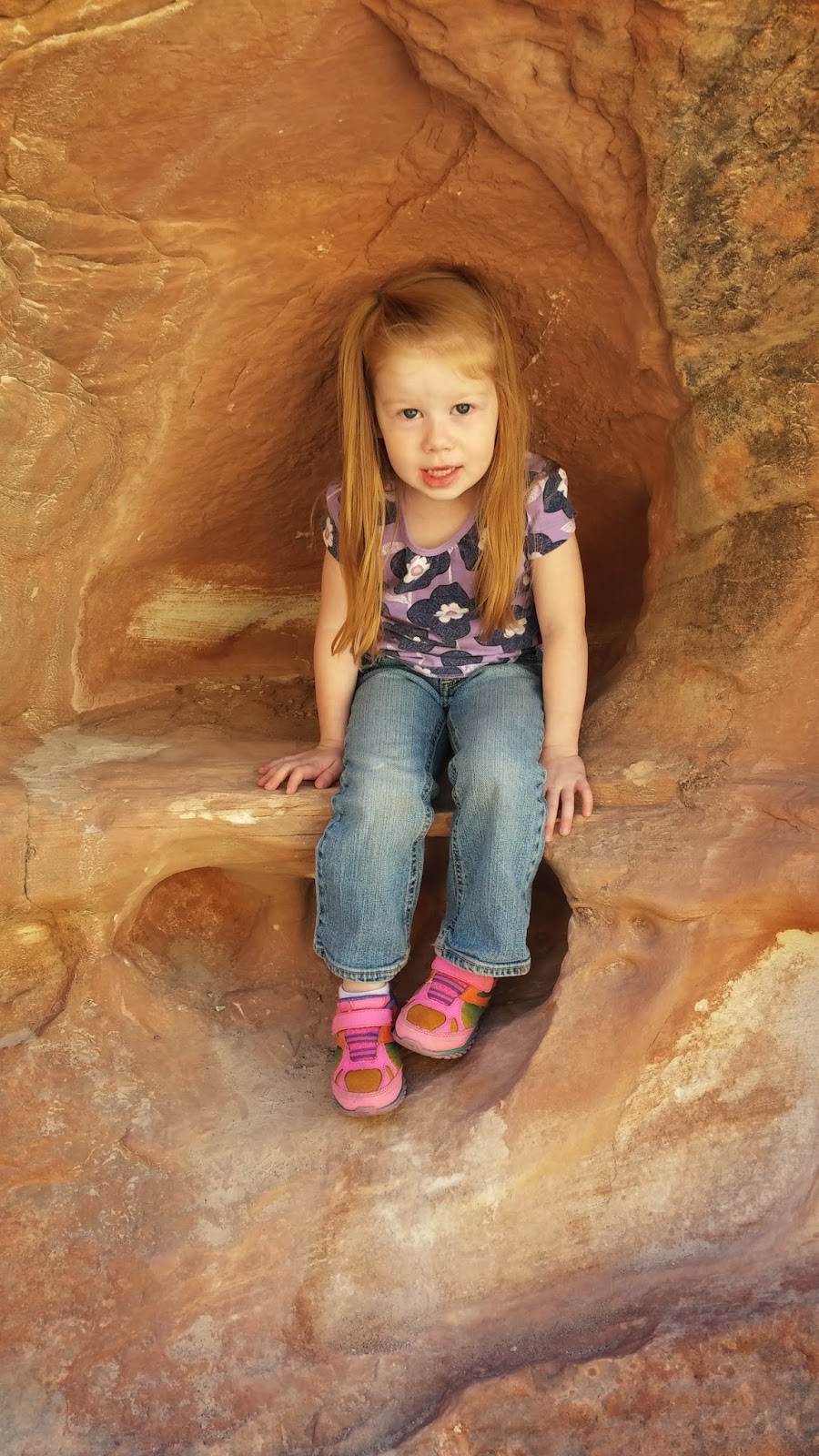 Even the blind man made it through! Which is awesome because we led him the wrong way at the beginning and basically put him in mortal jeopardy. Have you ever seen a blind man and his dog scale a cliff? I have. It's pretty intense. Probably moreso for poor Tommy. 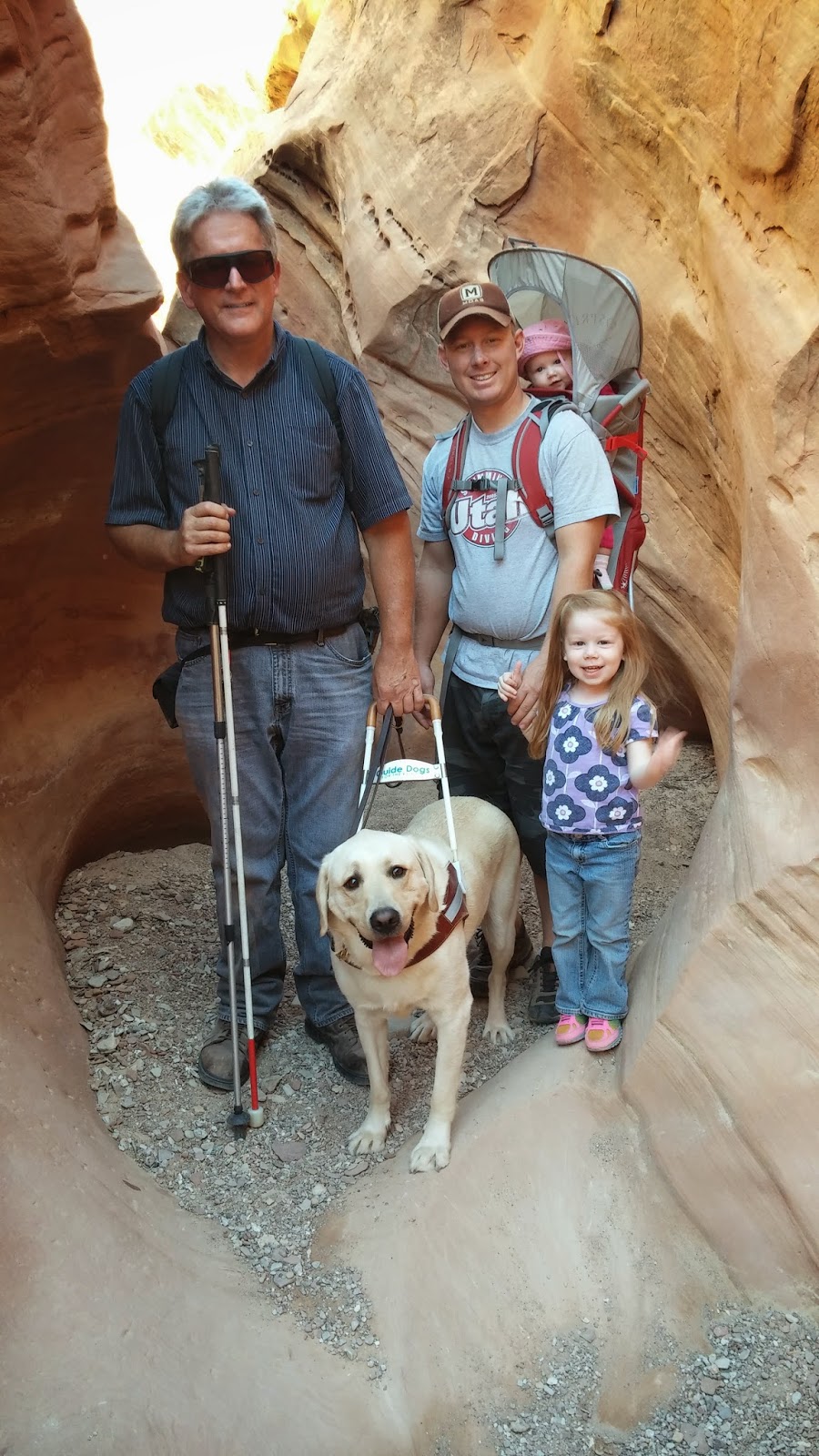 My favorite part of this picture is Brynlie. So freaking cute. 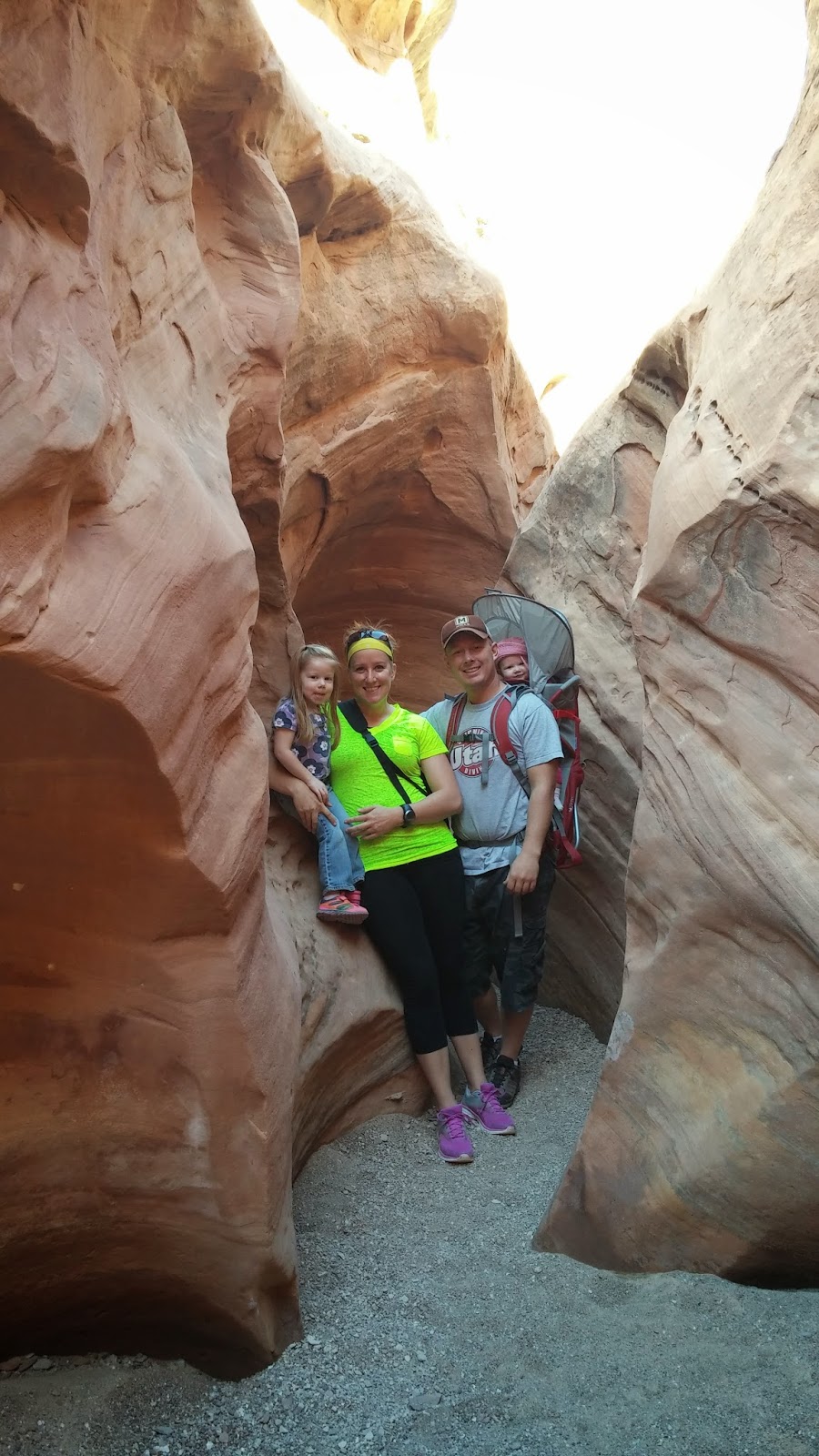 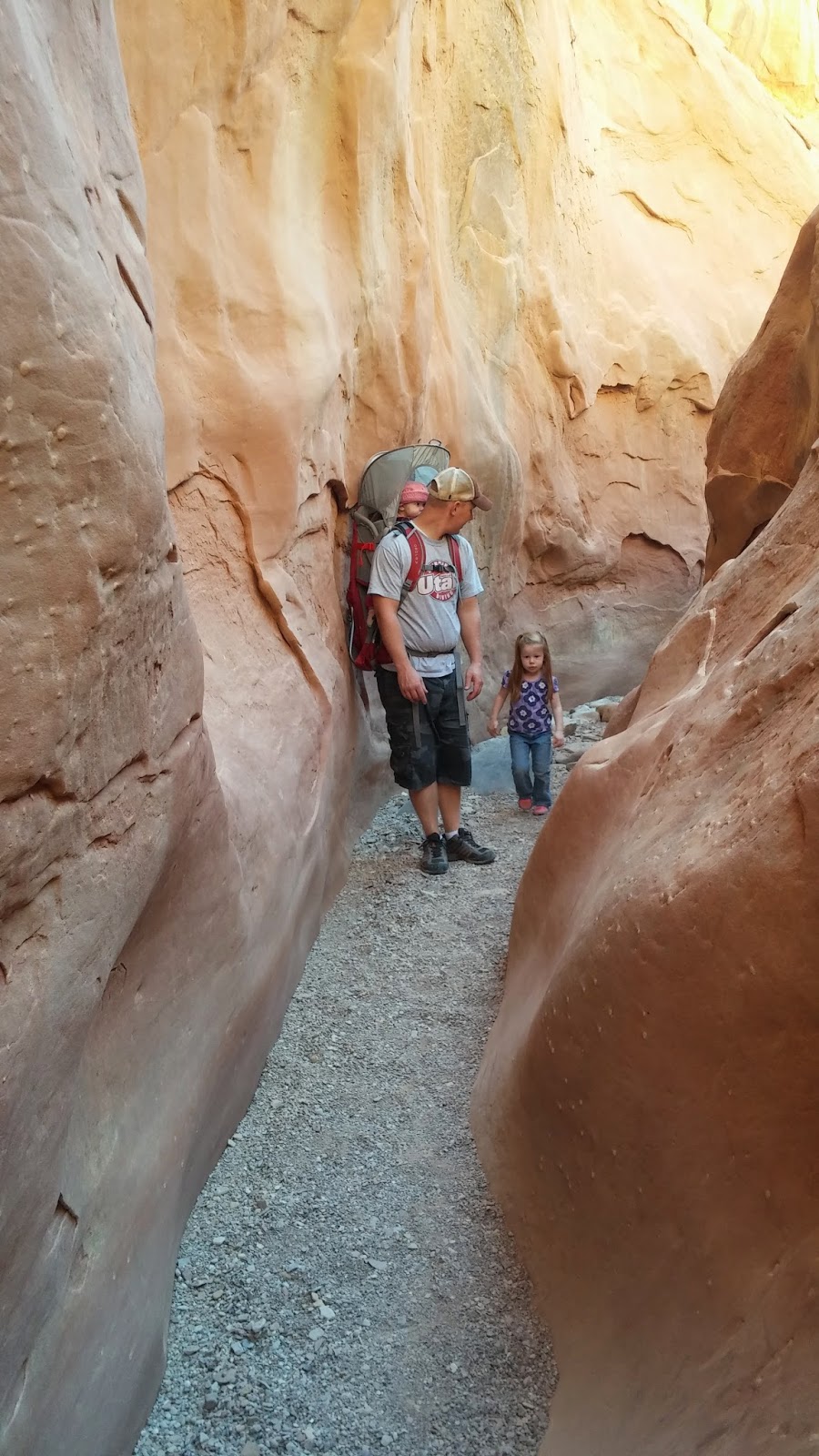 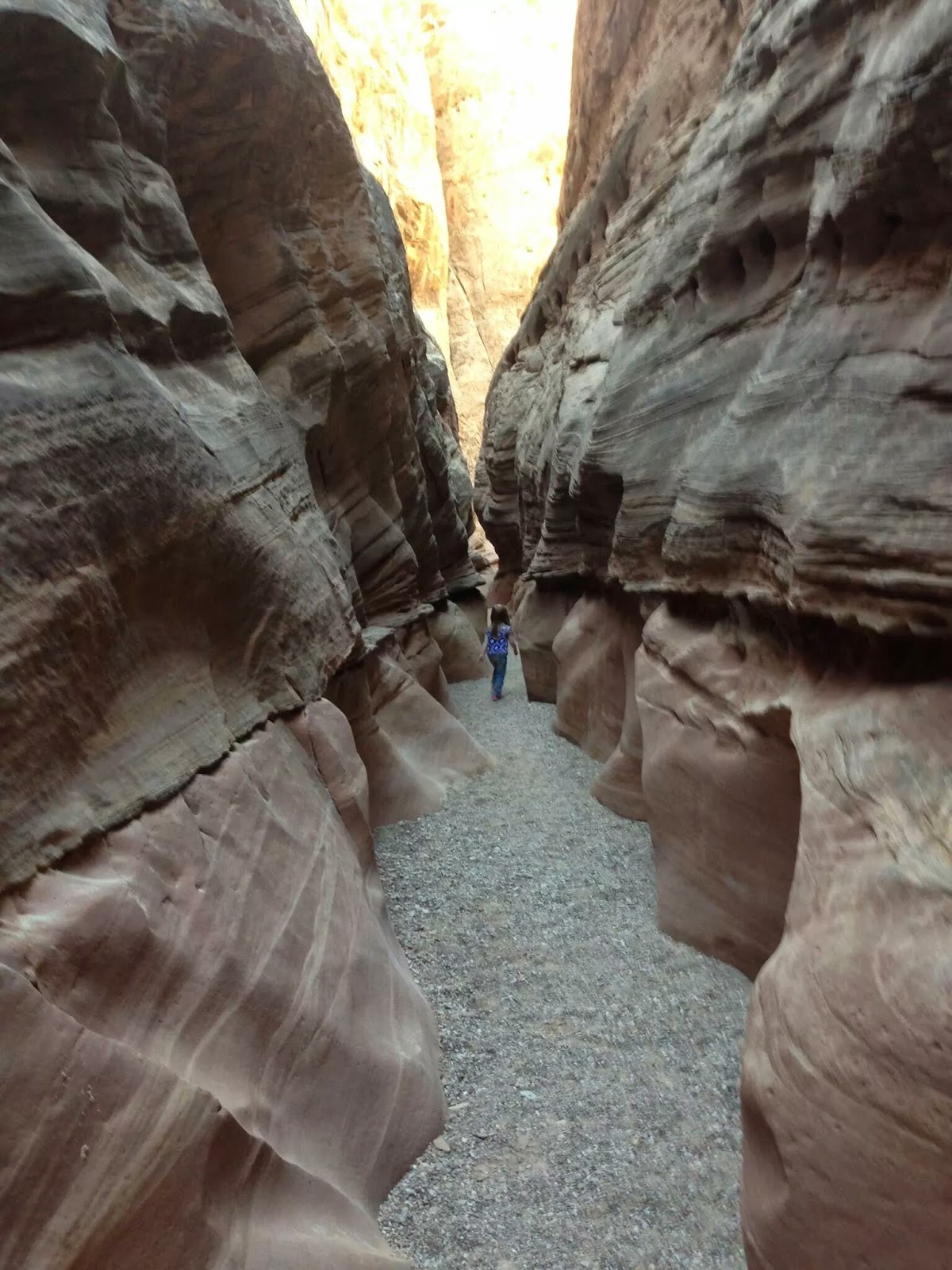 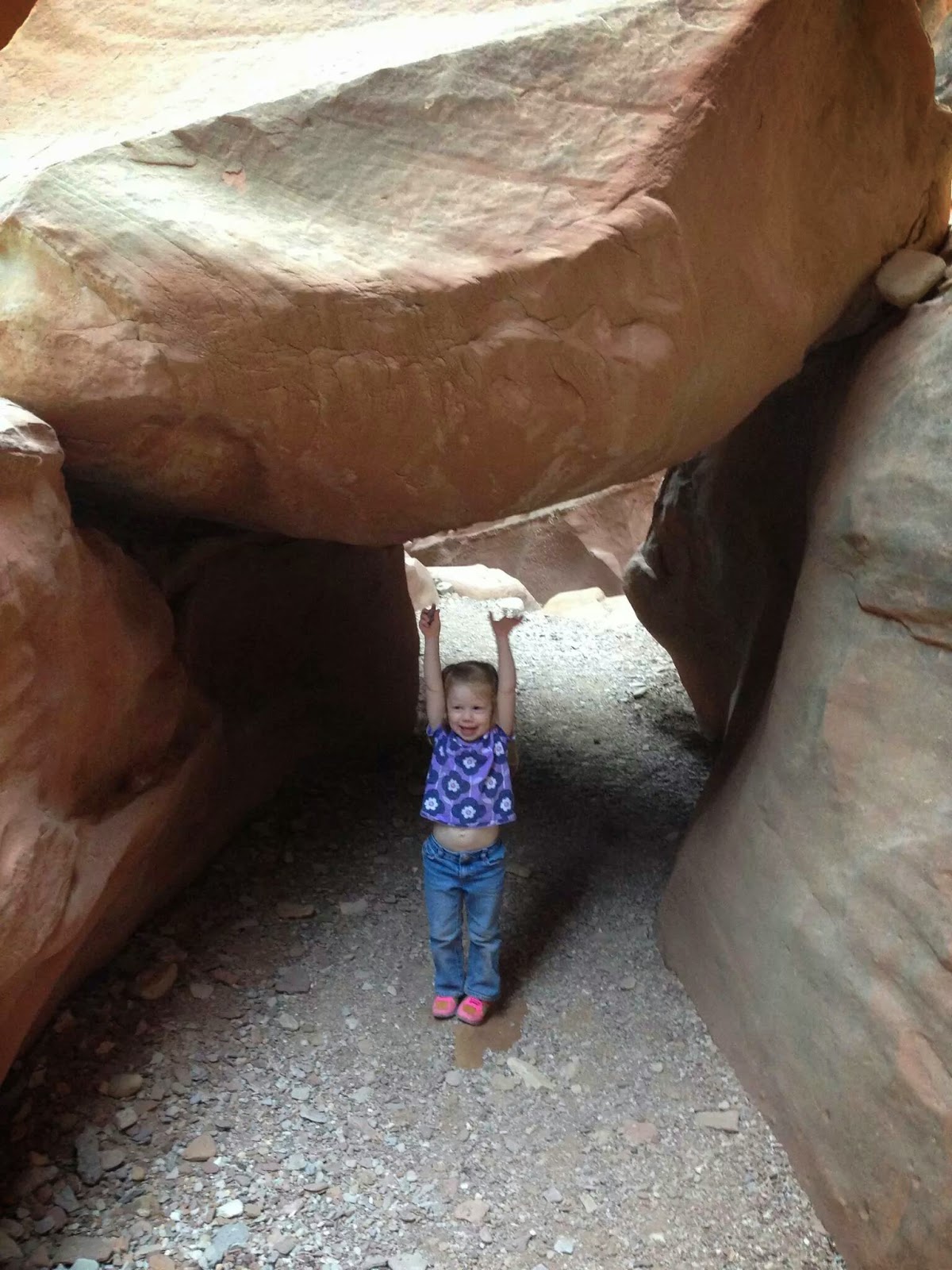 Can't you tell we're all having fun? 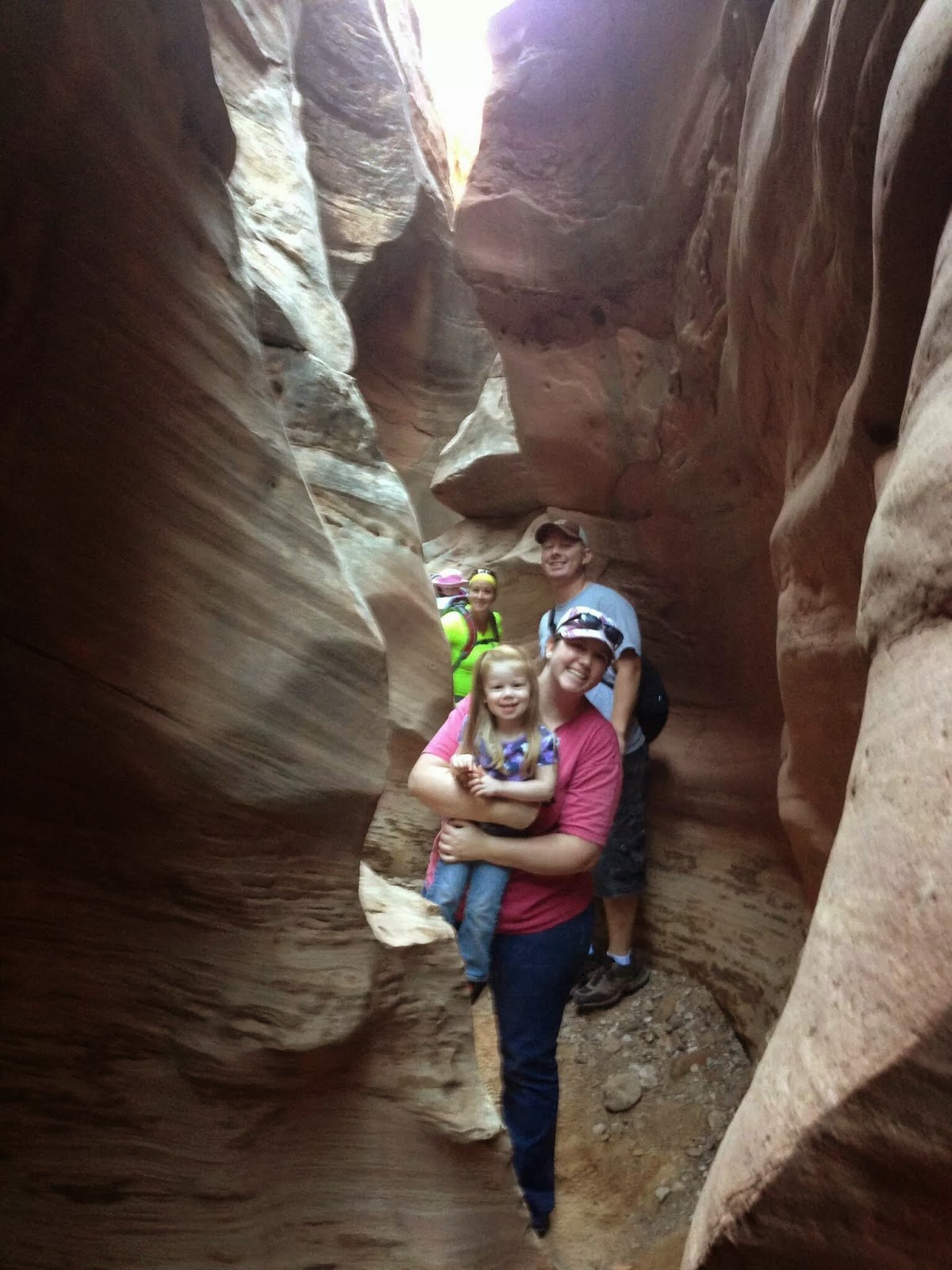 And now for your enjoyment, here's a random pictures-of-my-kids-sleeping montage. Just imagine "Chariots of Fire" playing in the background... 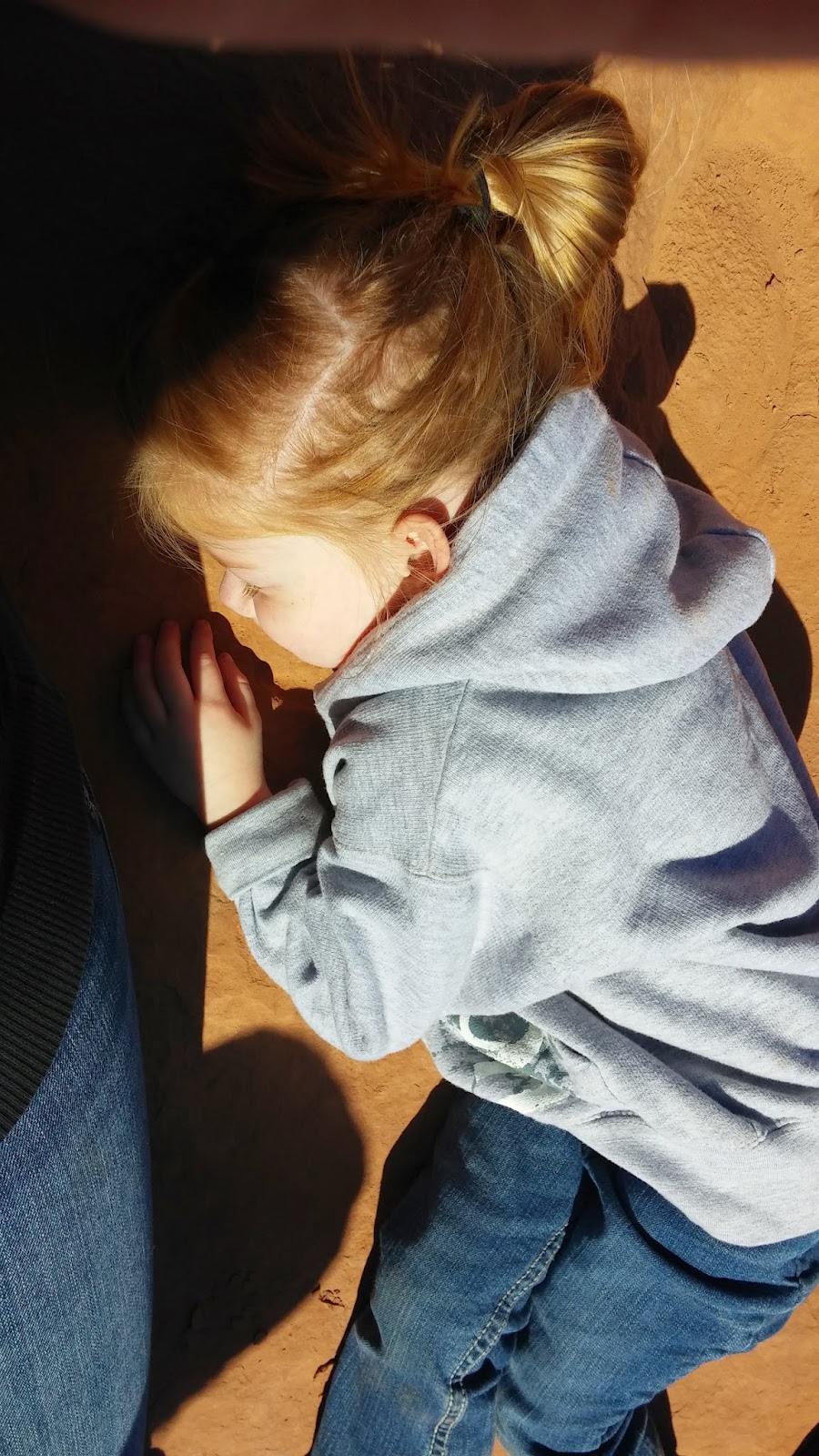 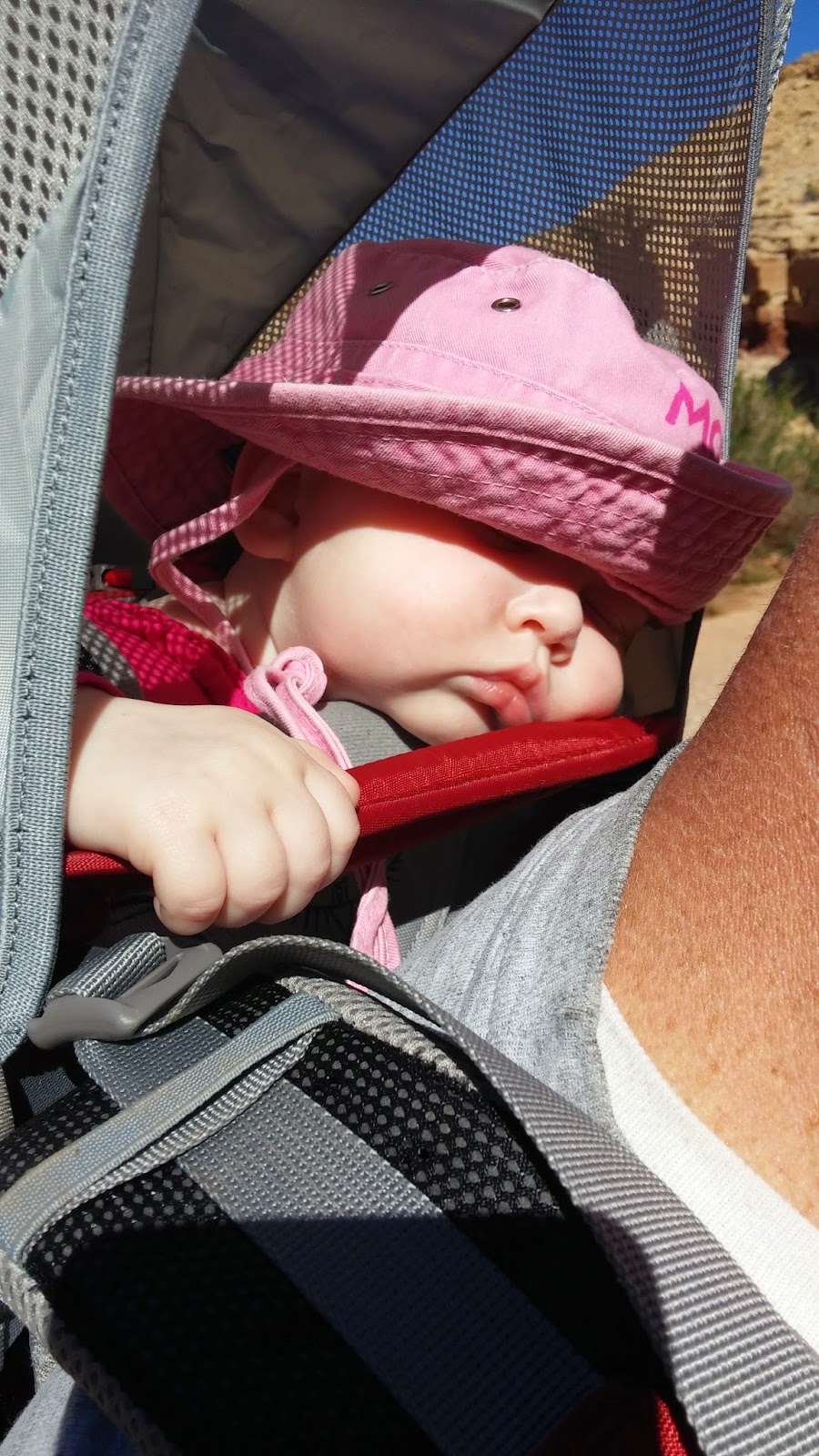 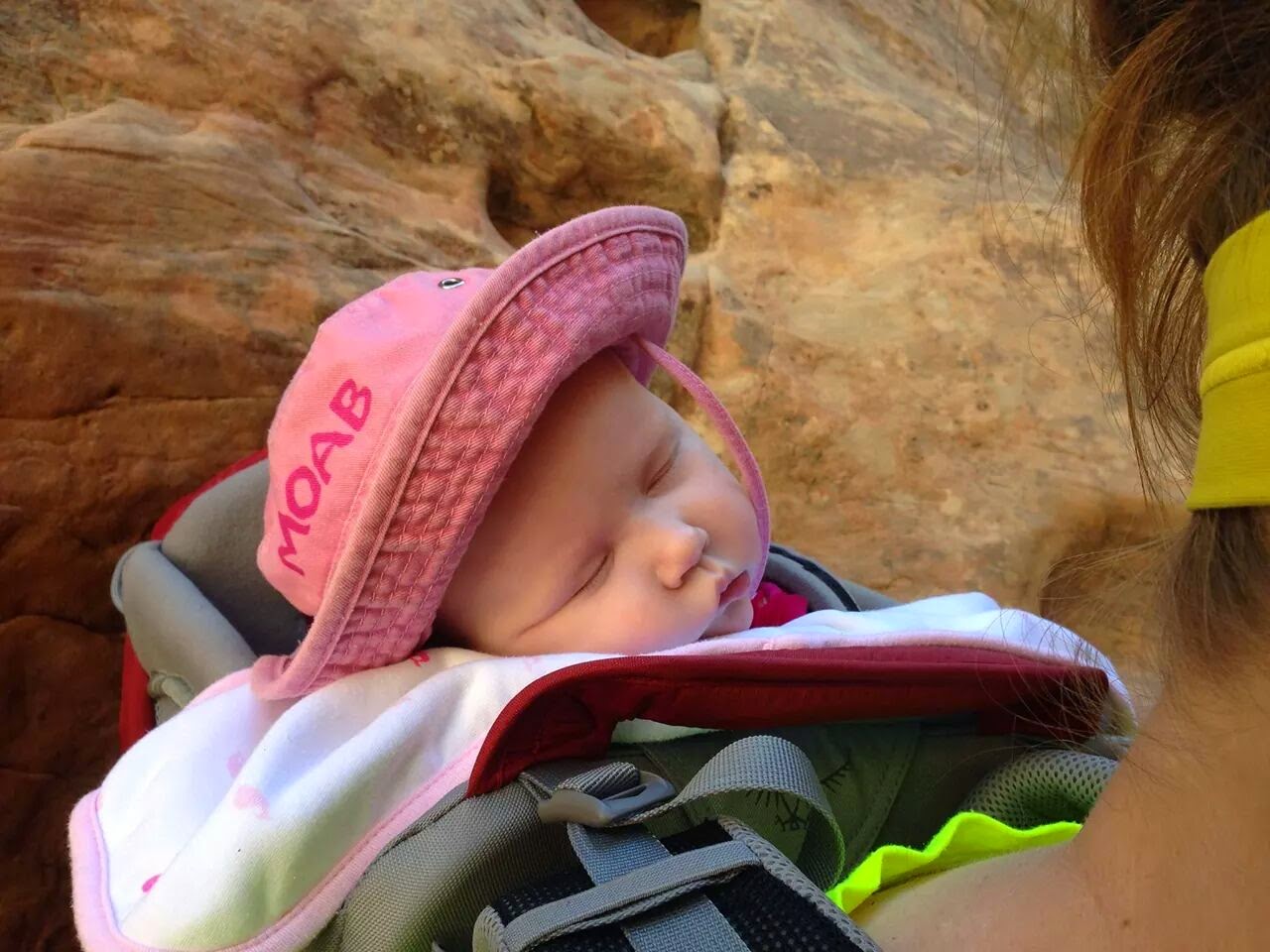 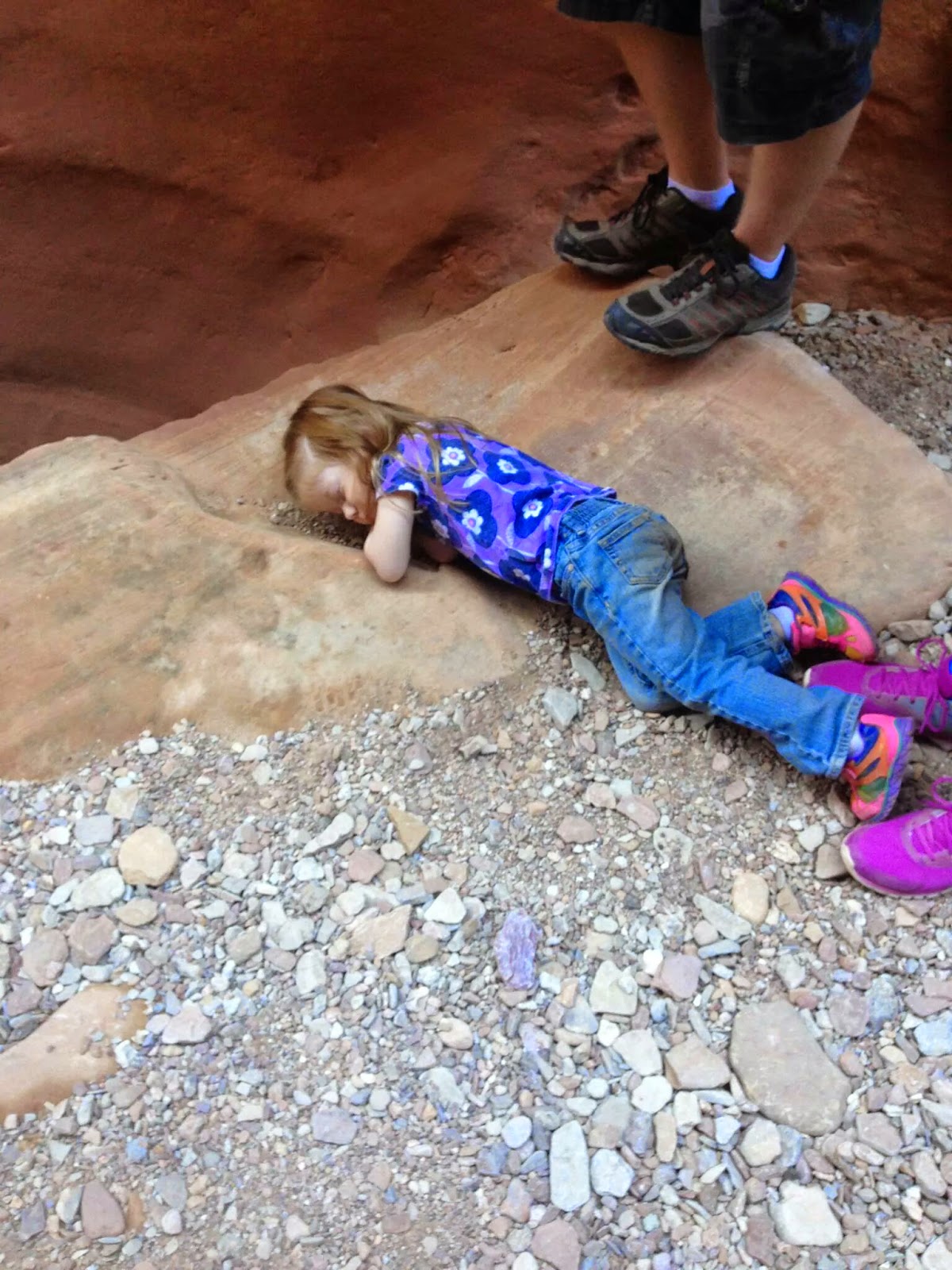 We had a blast on the hike but definitely exhausted ourselves. We were all moving a little slower the rest of the evening. It's not the easiest of hikes.

Sunday the ruthless wind that is almost always blowing in Goblin Valley showed up. We decided to try and head to the Valley of Goblins anyway. Brynlie wasn't having it and after a short trial run, was sentenced to sit in the car with my mom. I can't blame her, having sand blown in your eyes really isn't fun. Kennedy braved it a little while longer before she, too, had had enough. But the excitement and adventure that she had when we were running around was priceless. 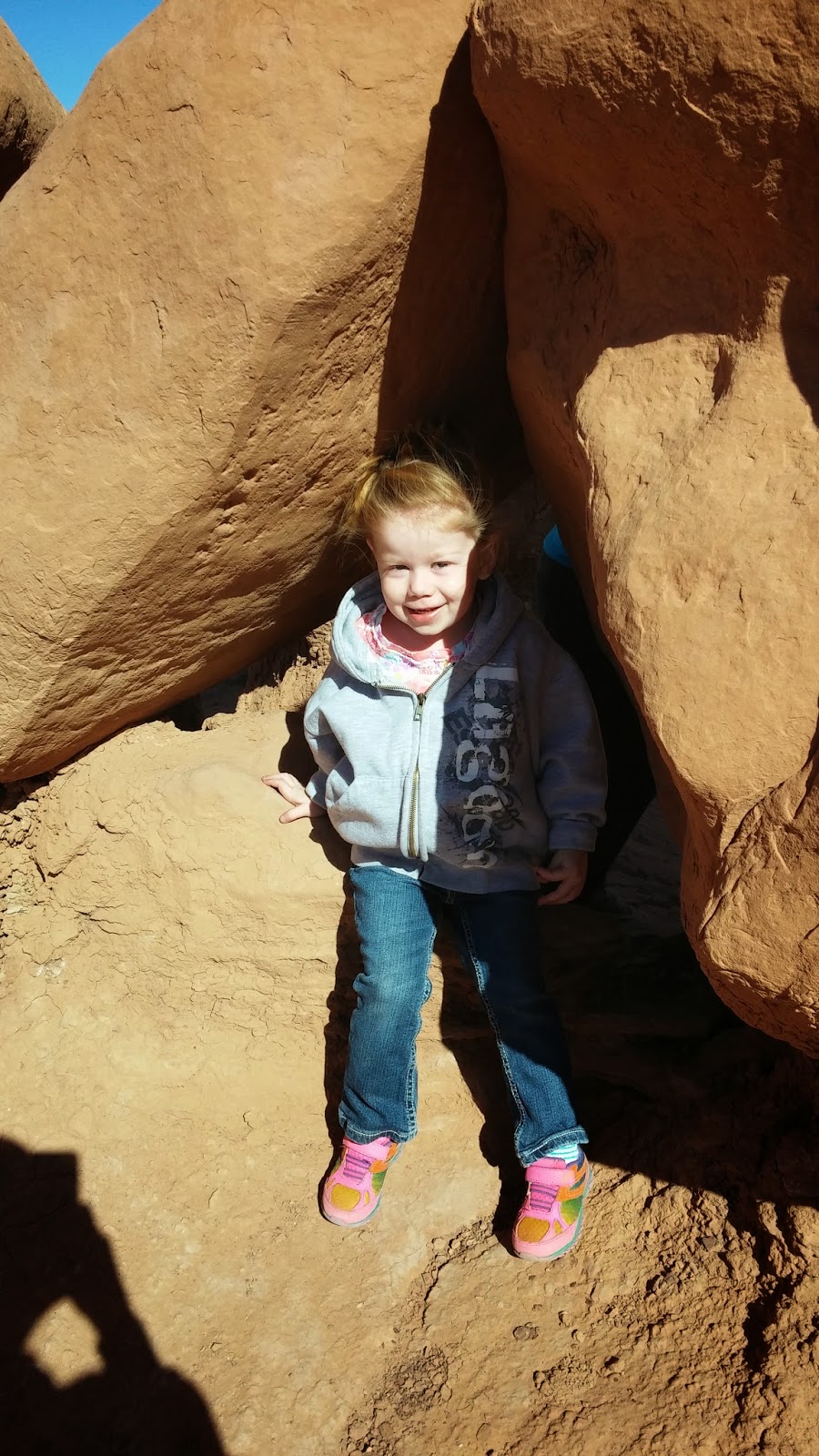 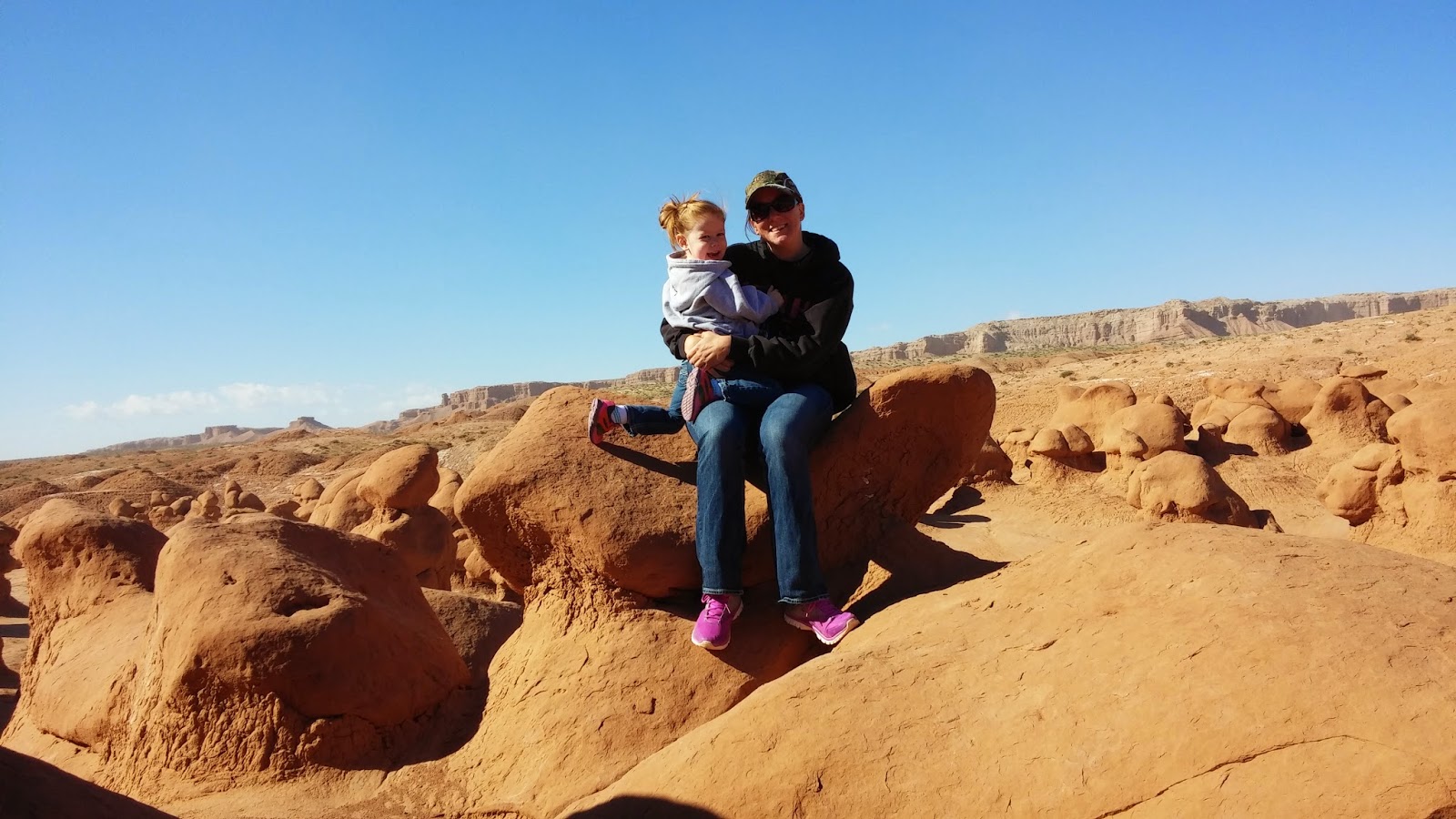 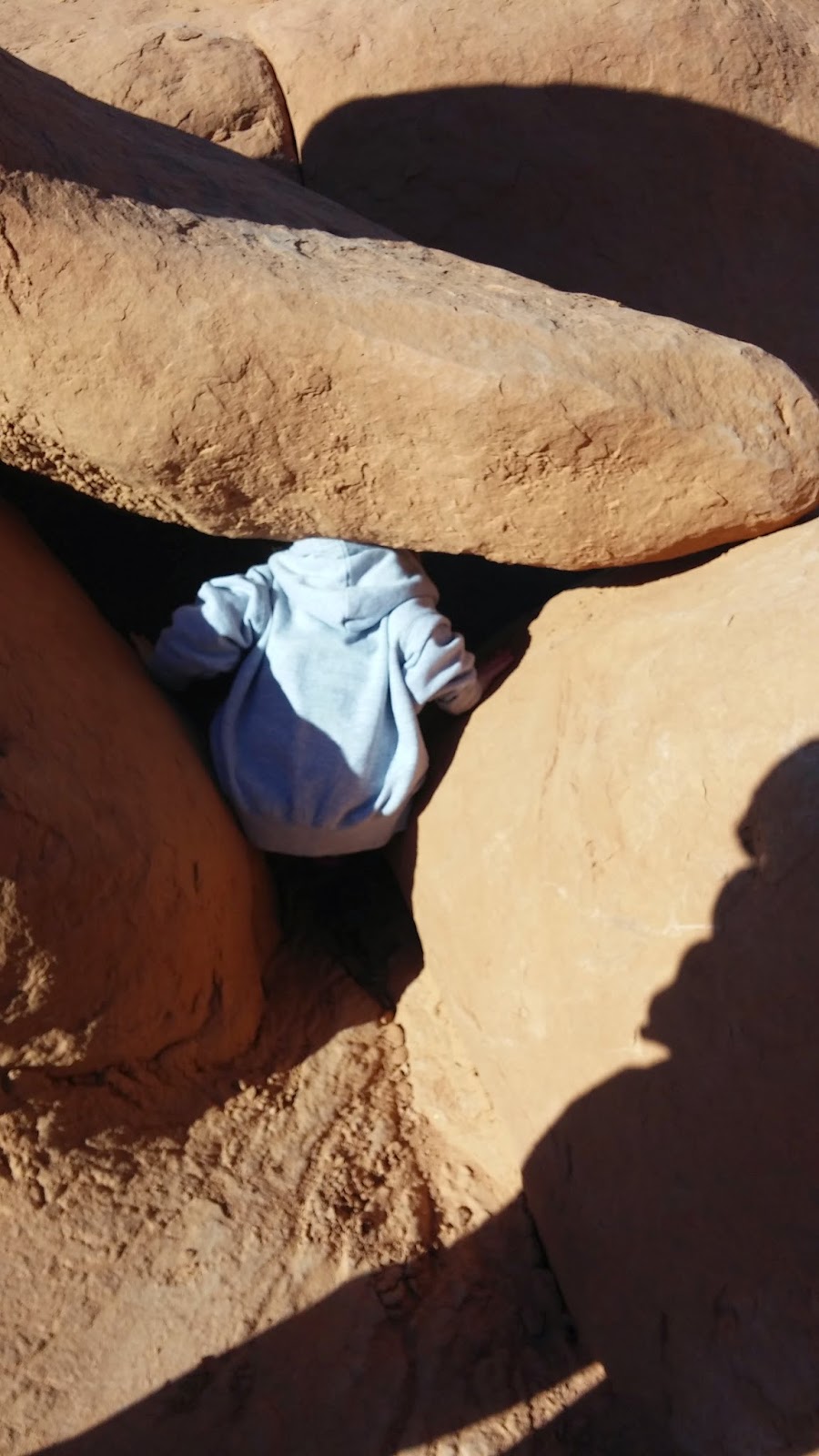 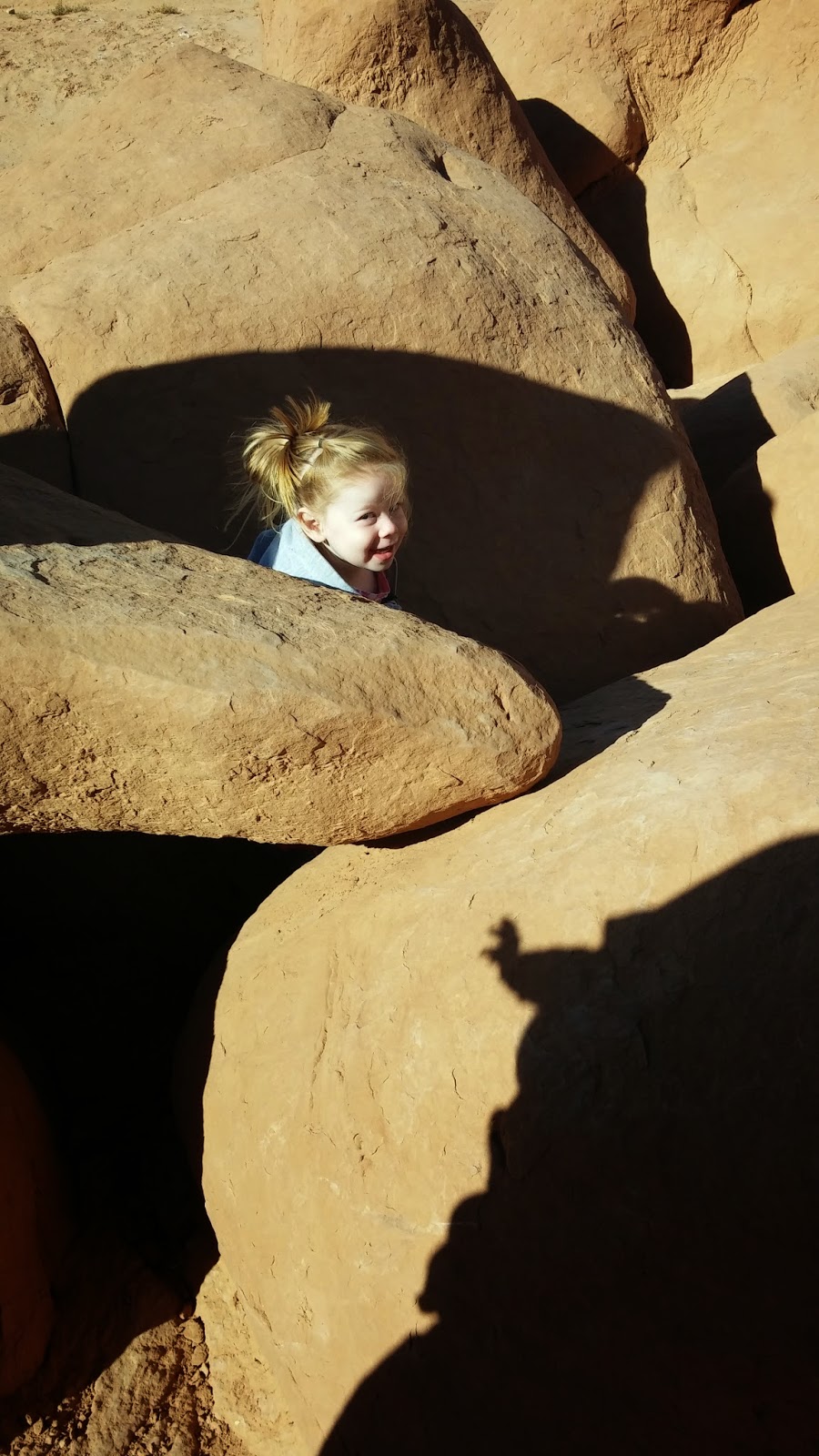 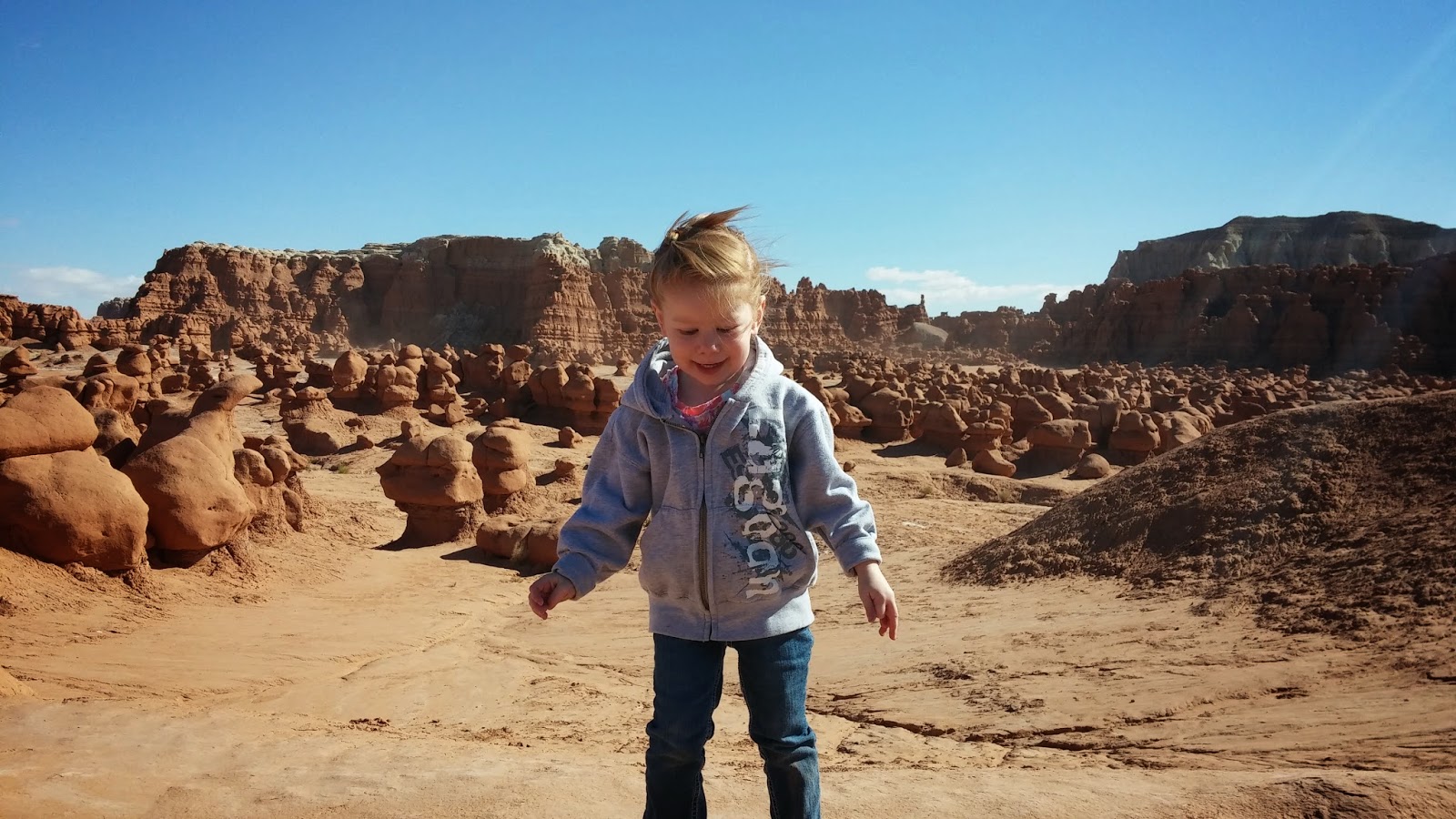 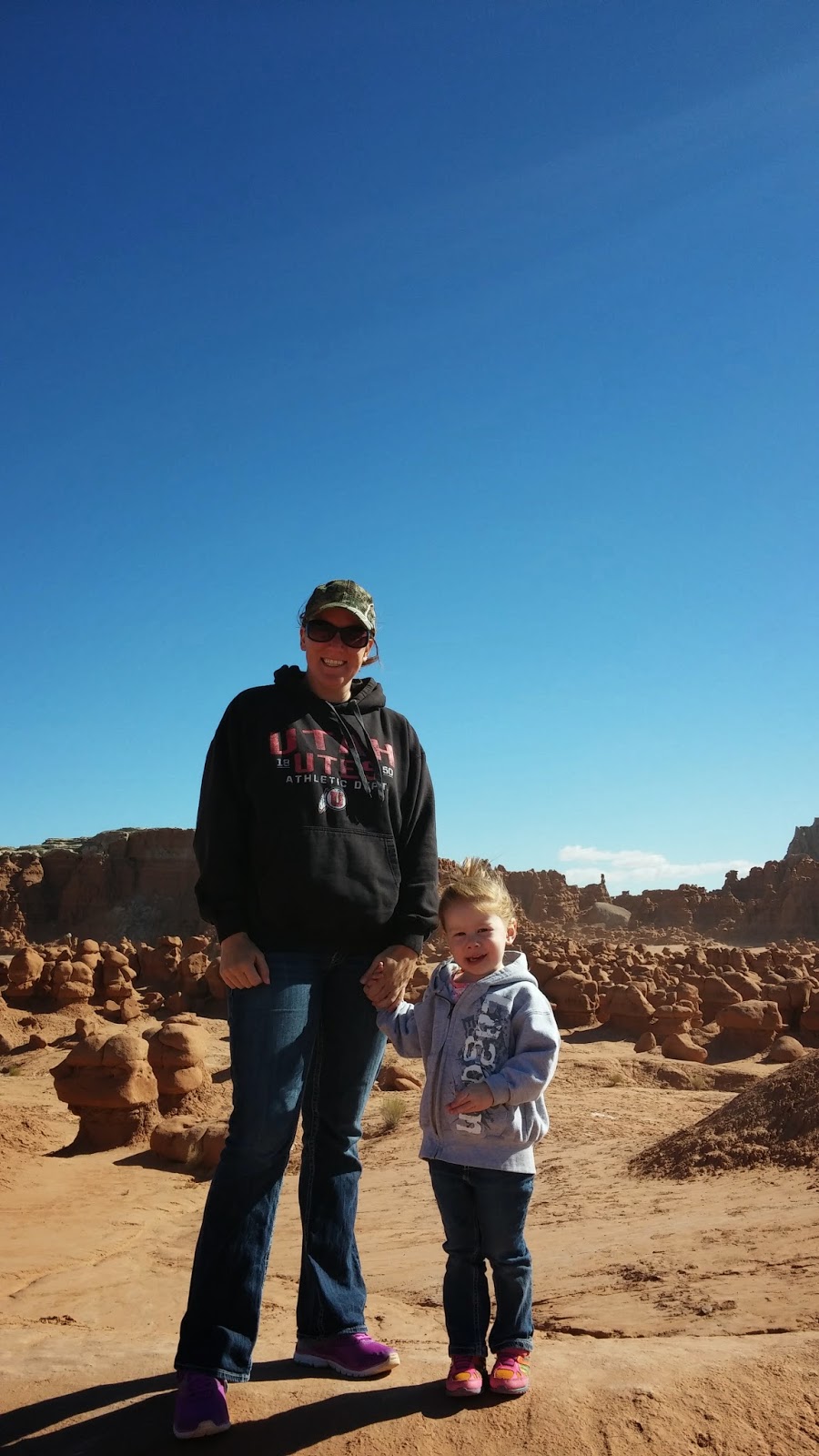 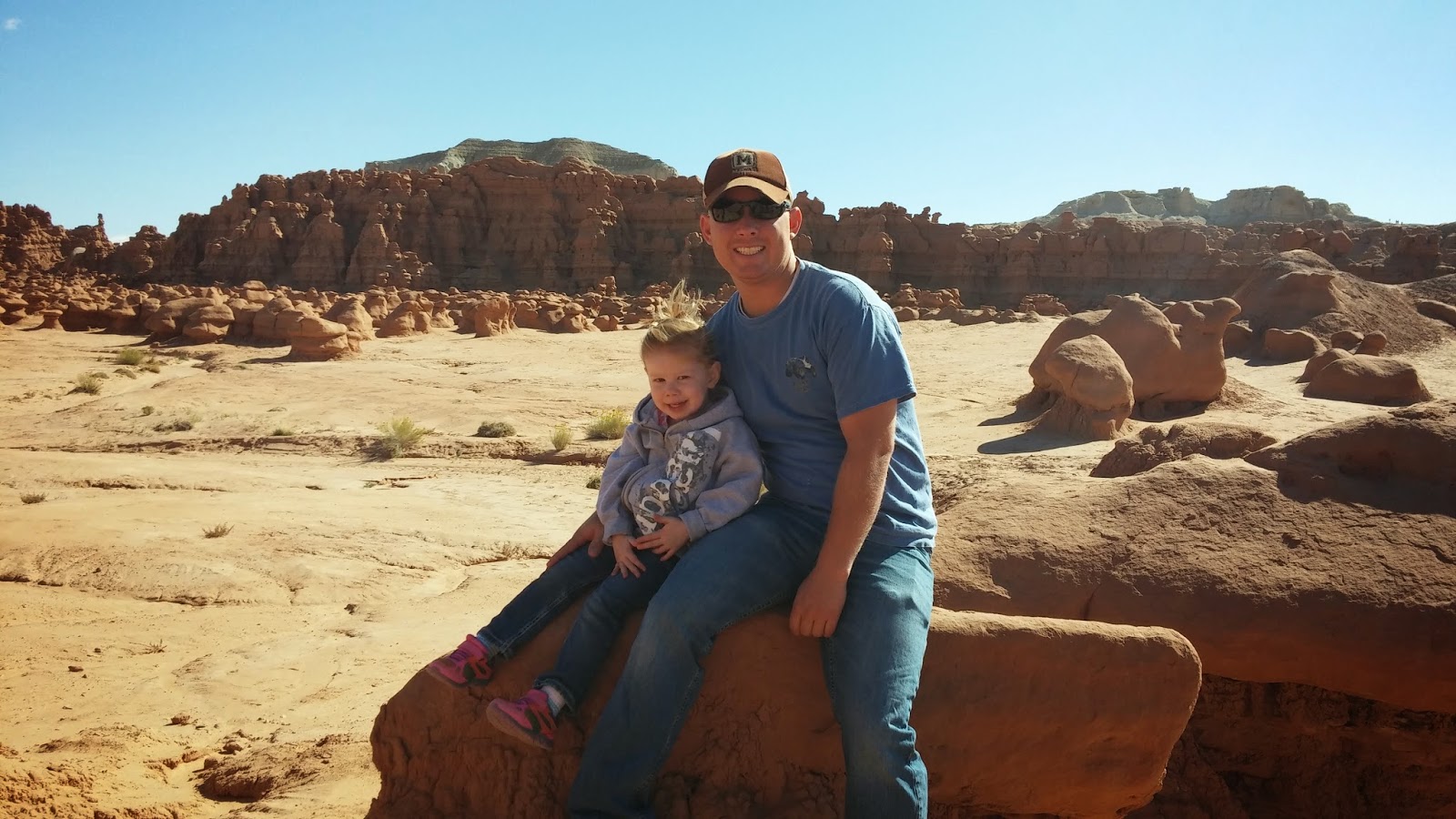 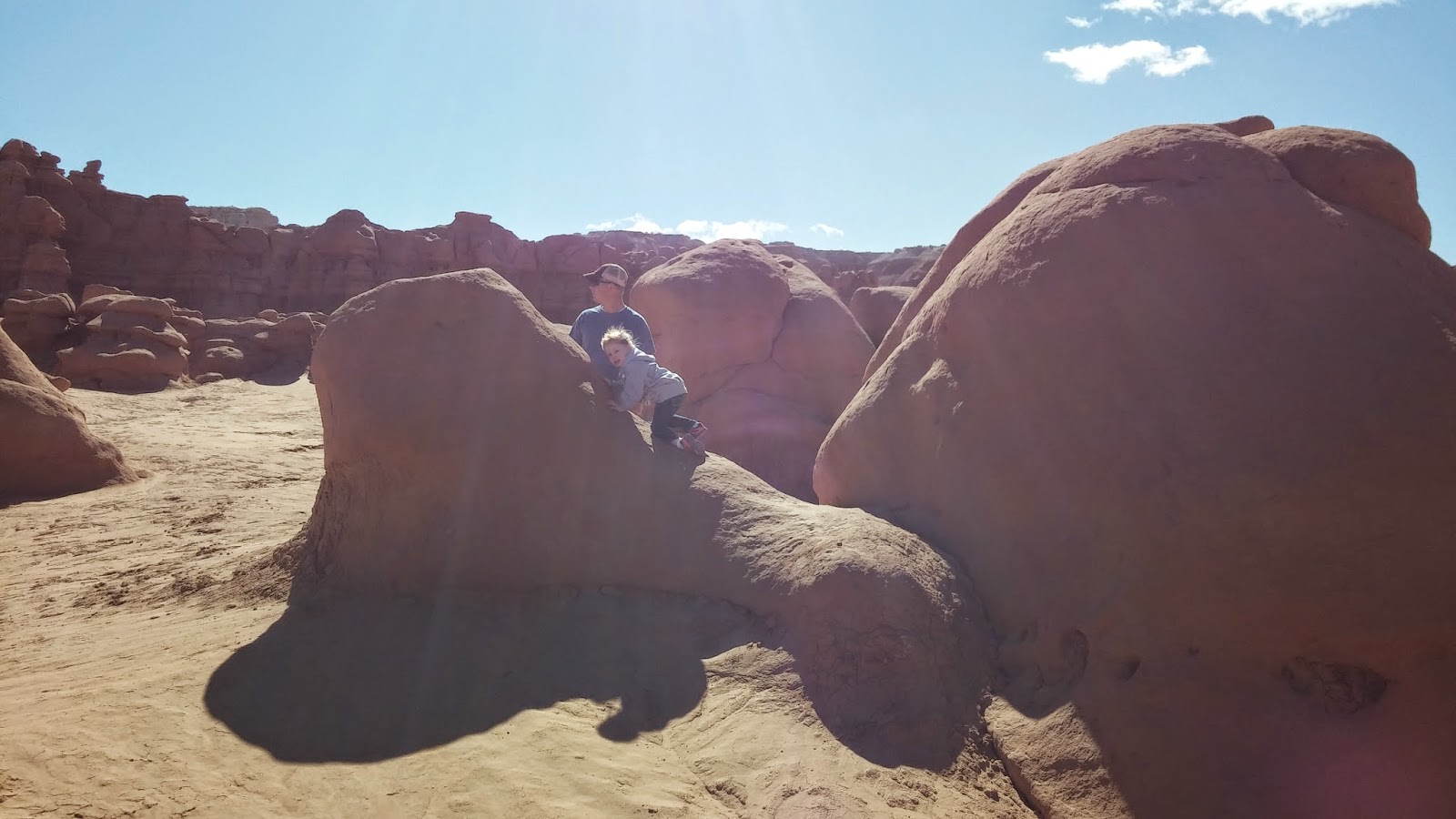 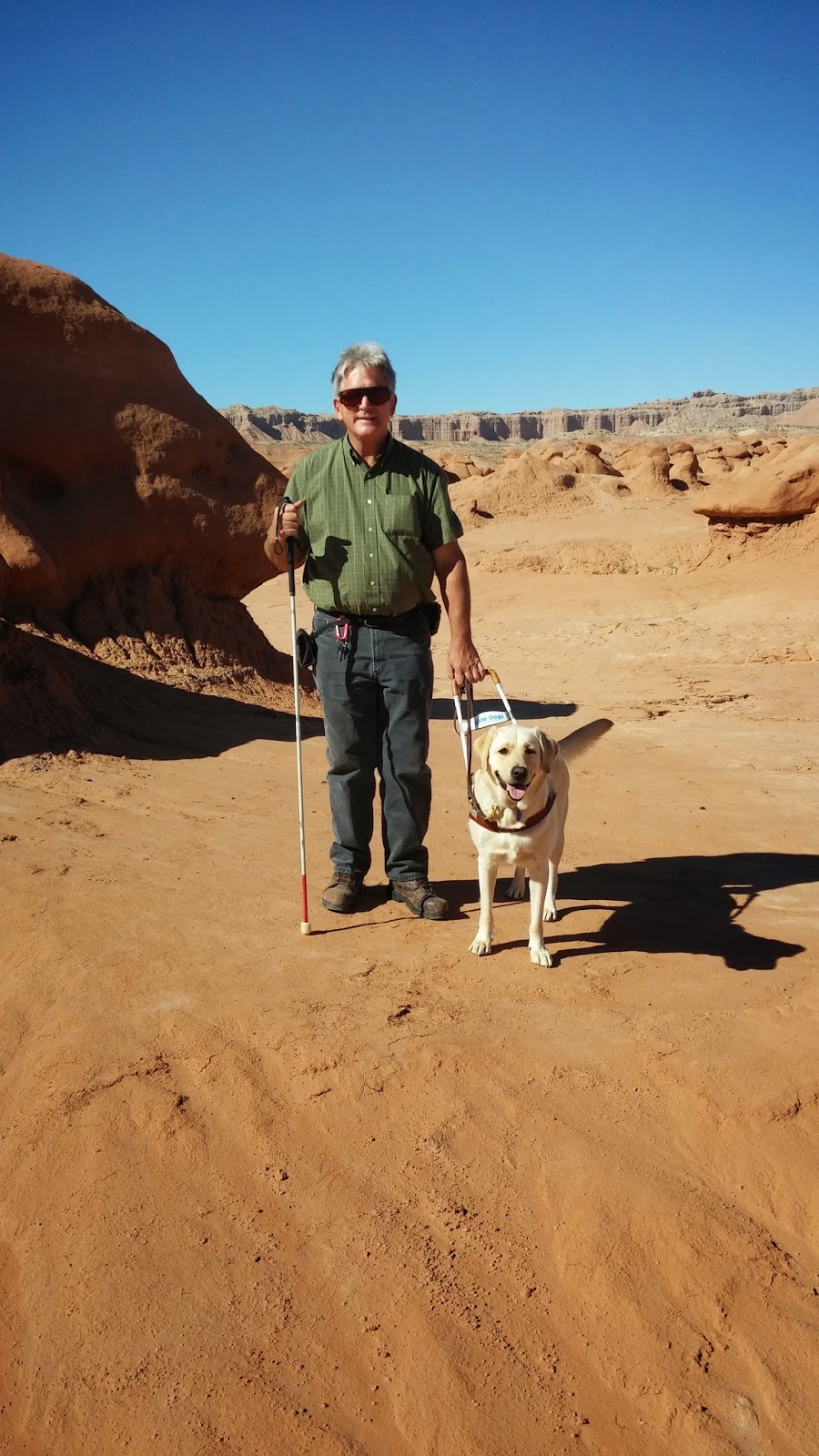 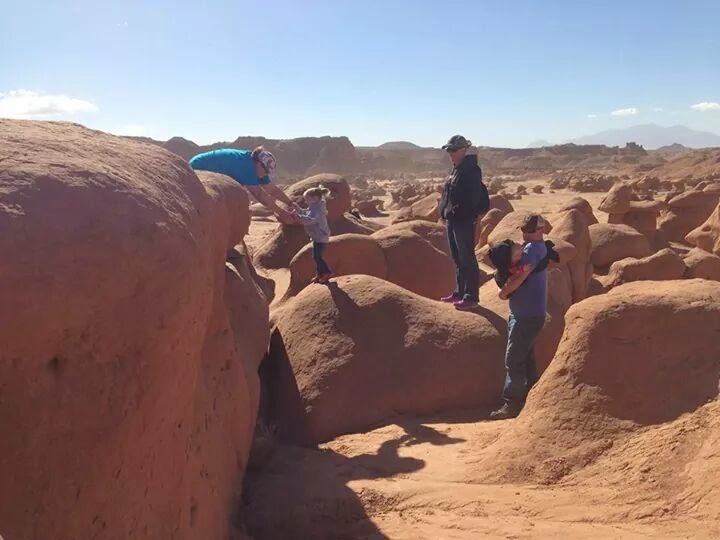 We spent the rest of the day doing "indoor activities" like watching a movie and going for a drive. Amazingly there weren't any photo opportunities during those exciting events. I know, I was shocked, too.

Oh wait, just kidding, there was one... 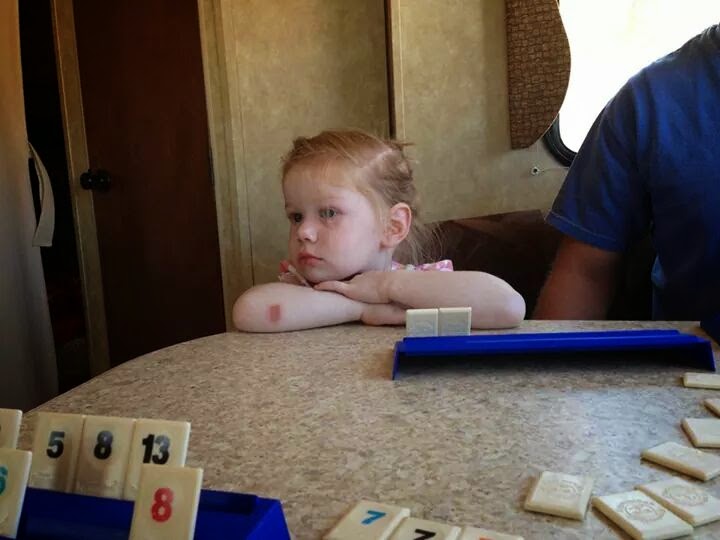 Riveting. She's sure pretty though. Scabs and all.

Monday we packed up, which wasn't entirely boring: 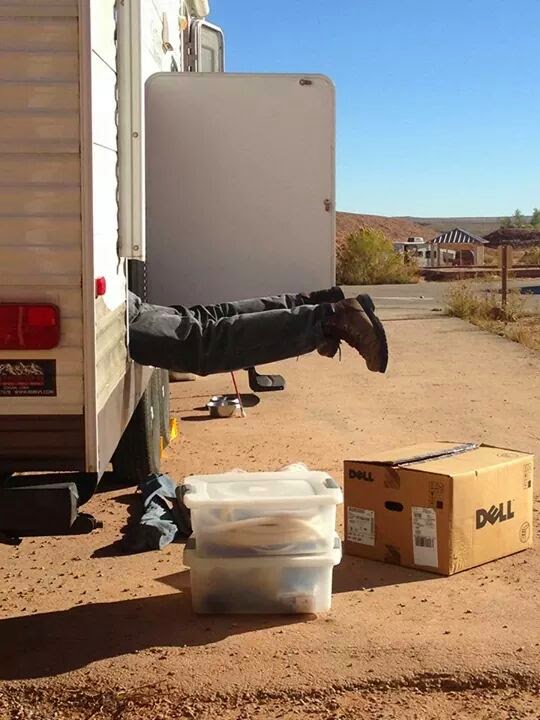 Then decided to have another go in the Valley of Goblins since the wind had stopped. It was much more fun this time. Cory, Kennedy, and I explored and climbed until we were sweaty and whiny. It was glorious. Also we had crows circling above us. I'm pretty sure they were waiting for us to die.

It was a fun trip and was so nice to get away and enjoy southern Utah. I really feel so grateful to live in such a gorgeous state with so much to see and do.

Oh, and there was a train at the rest stop on the way home, which may or may not have made Kennedy's brain explode with excitement. She's such a boy. 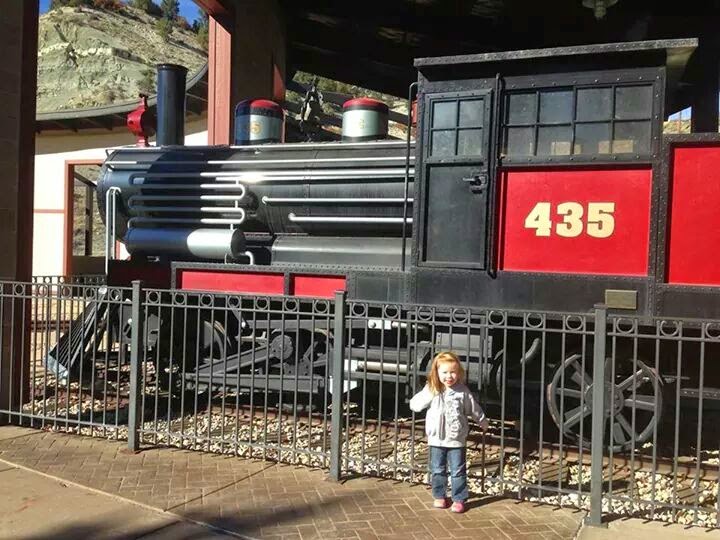