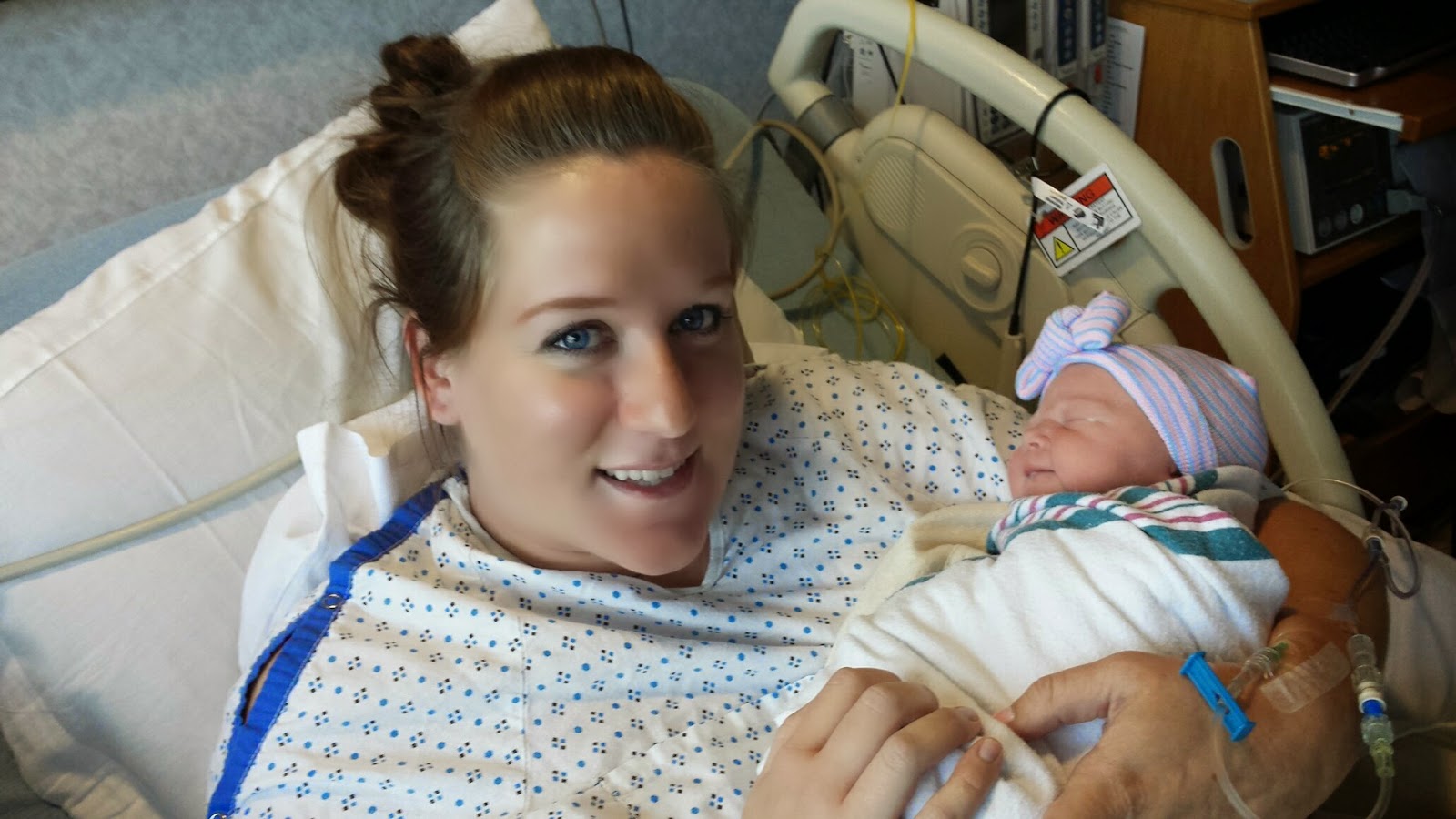 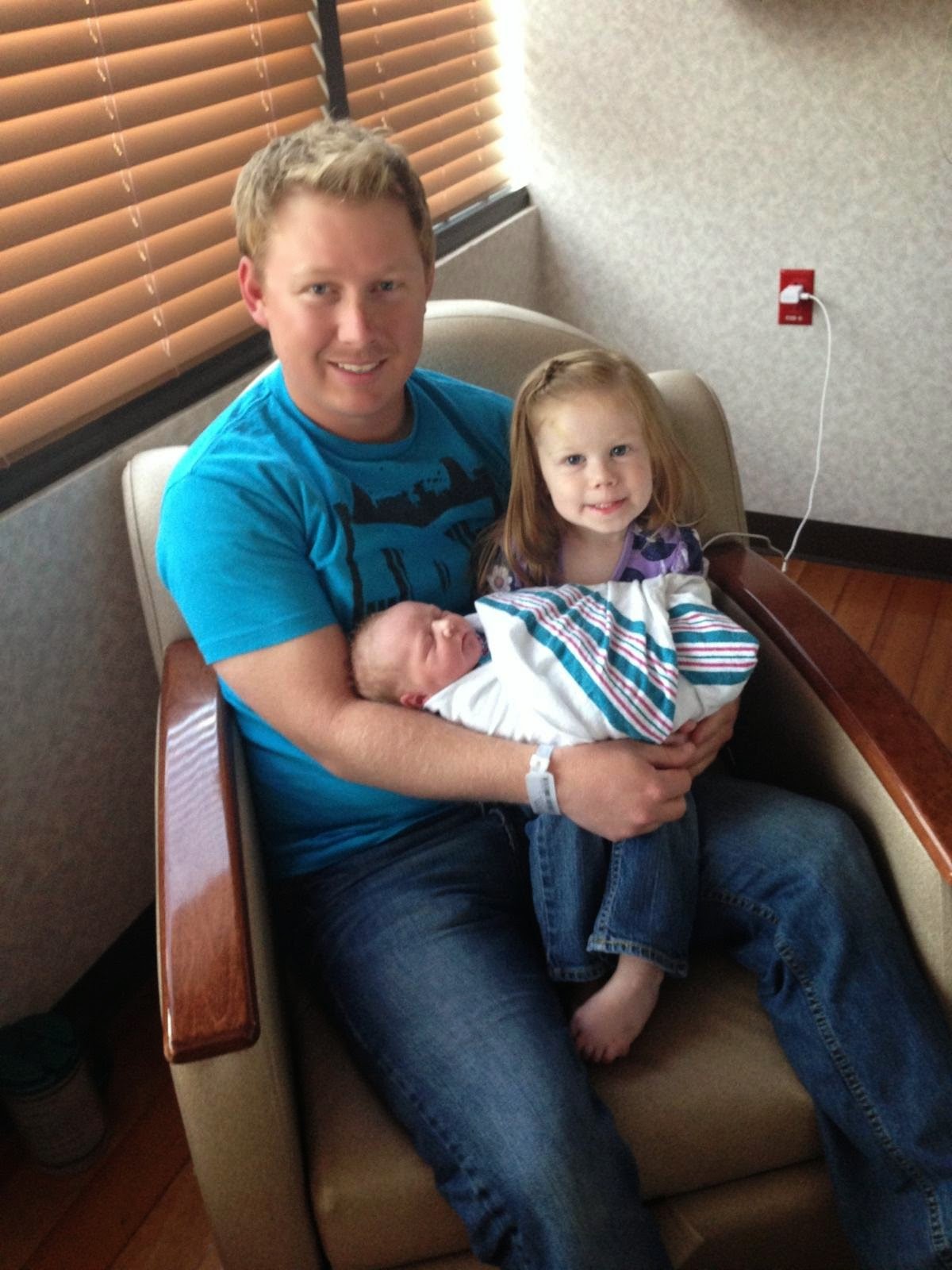 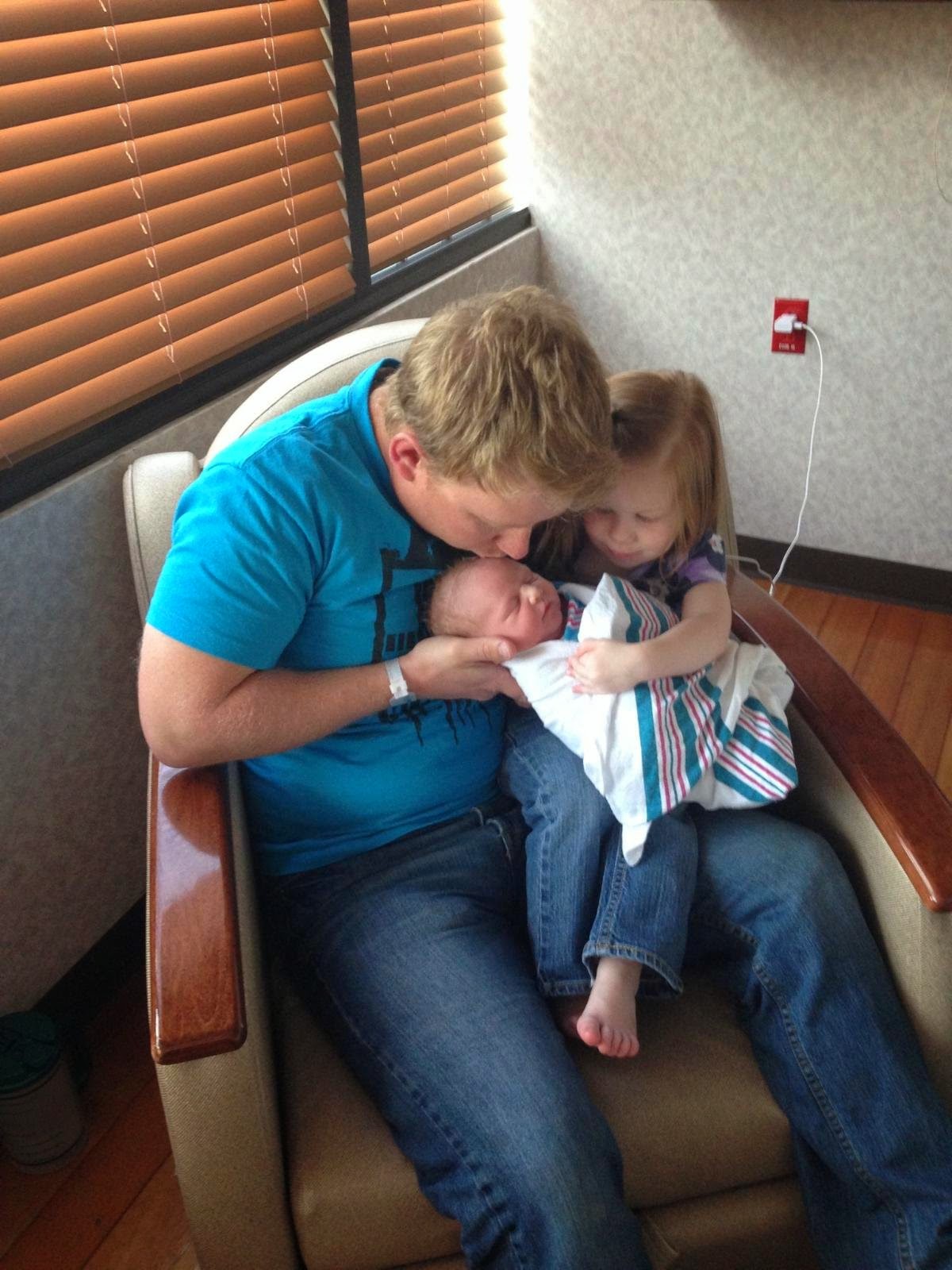 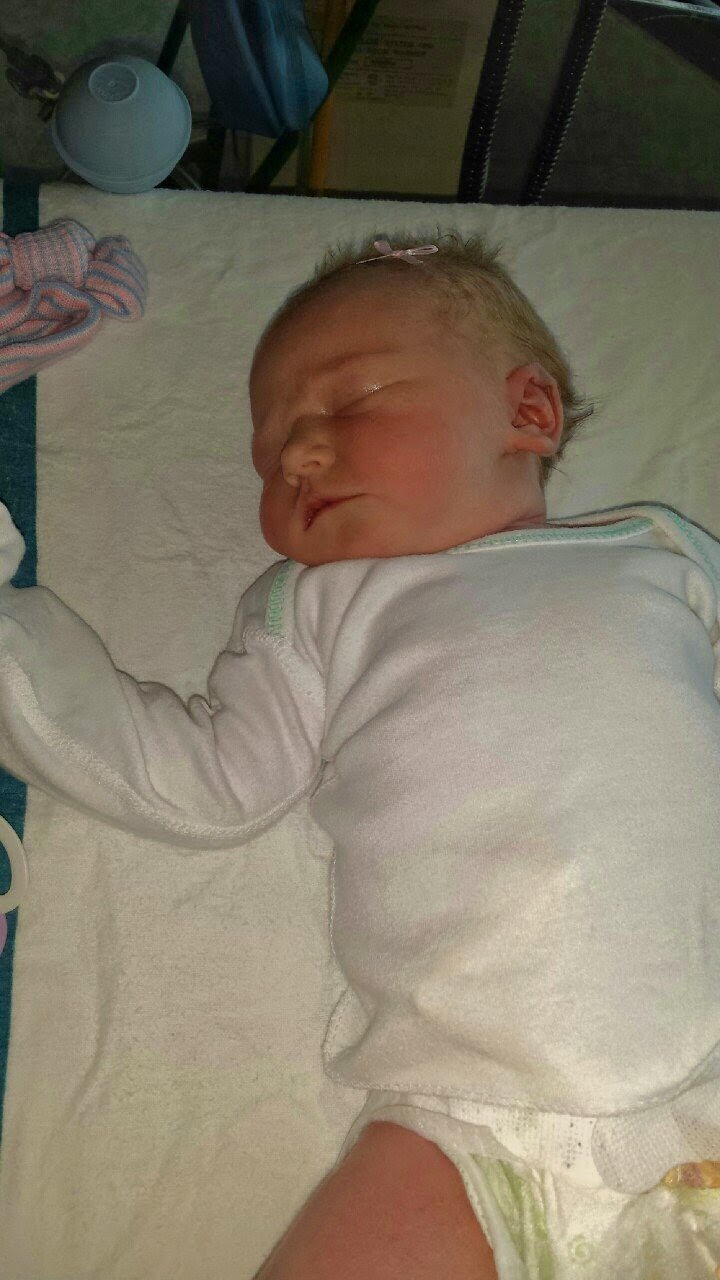 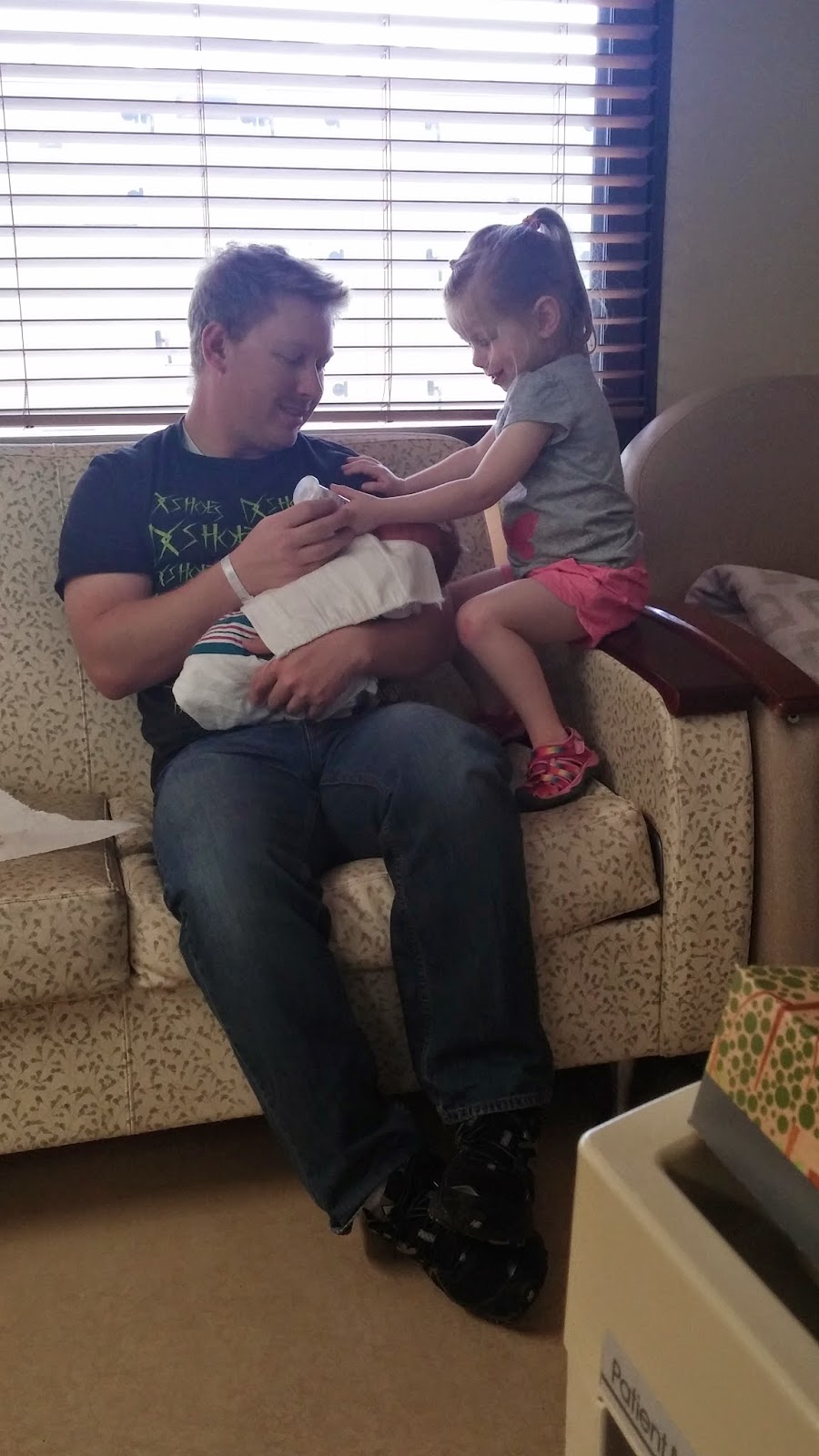 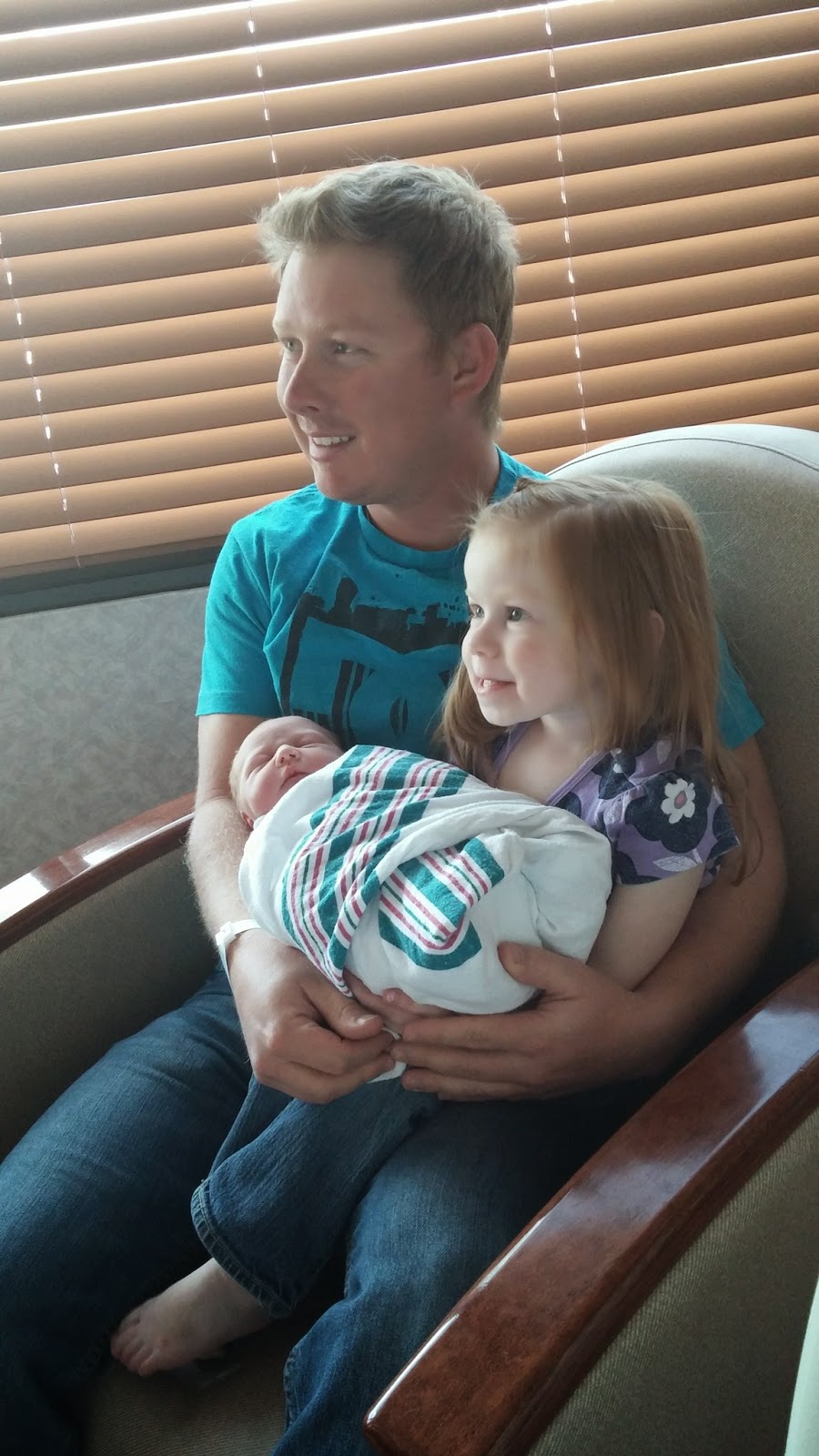 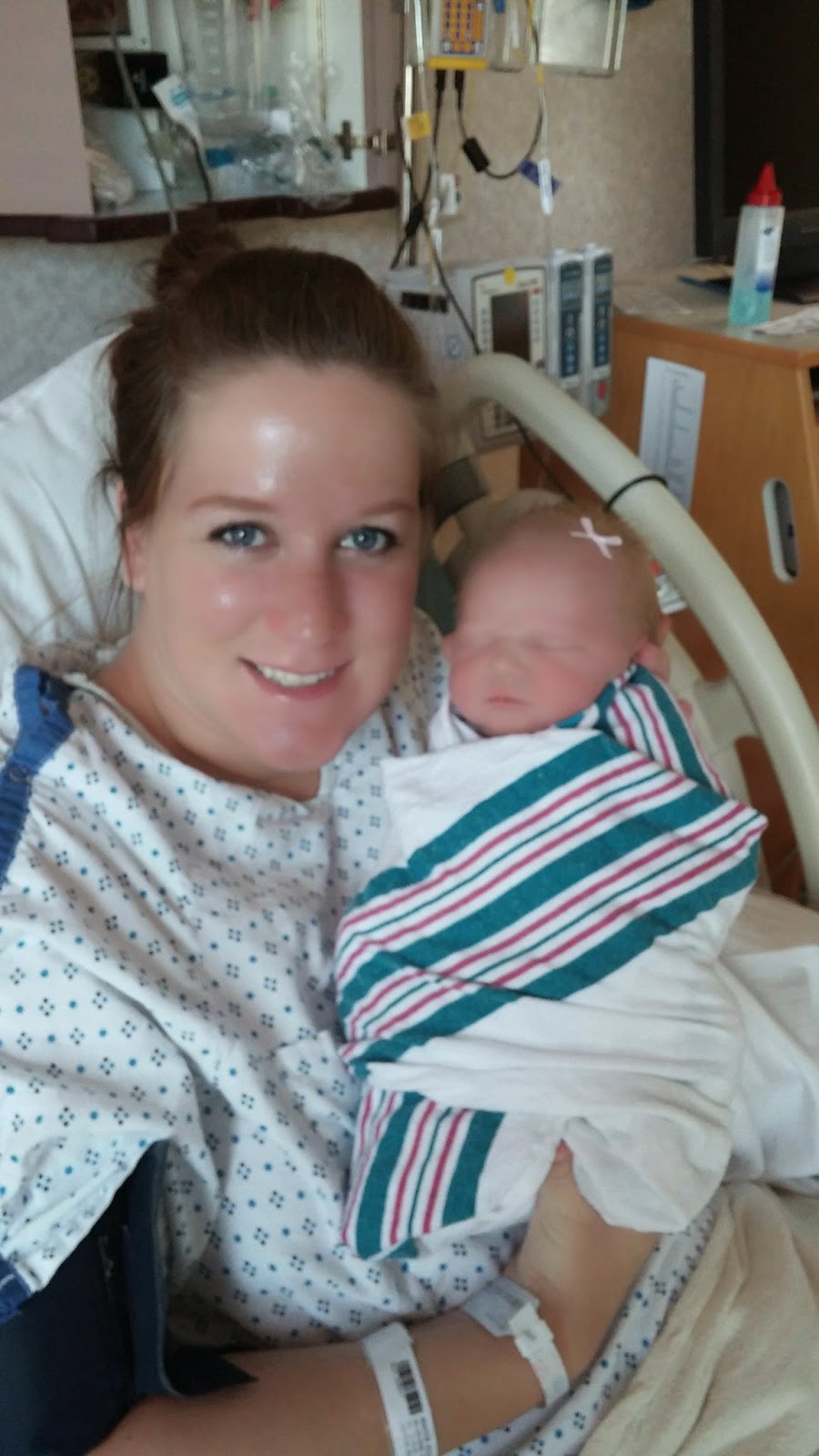 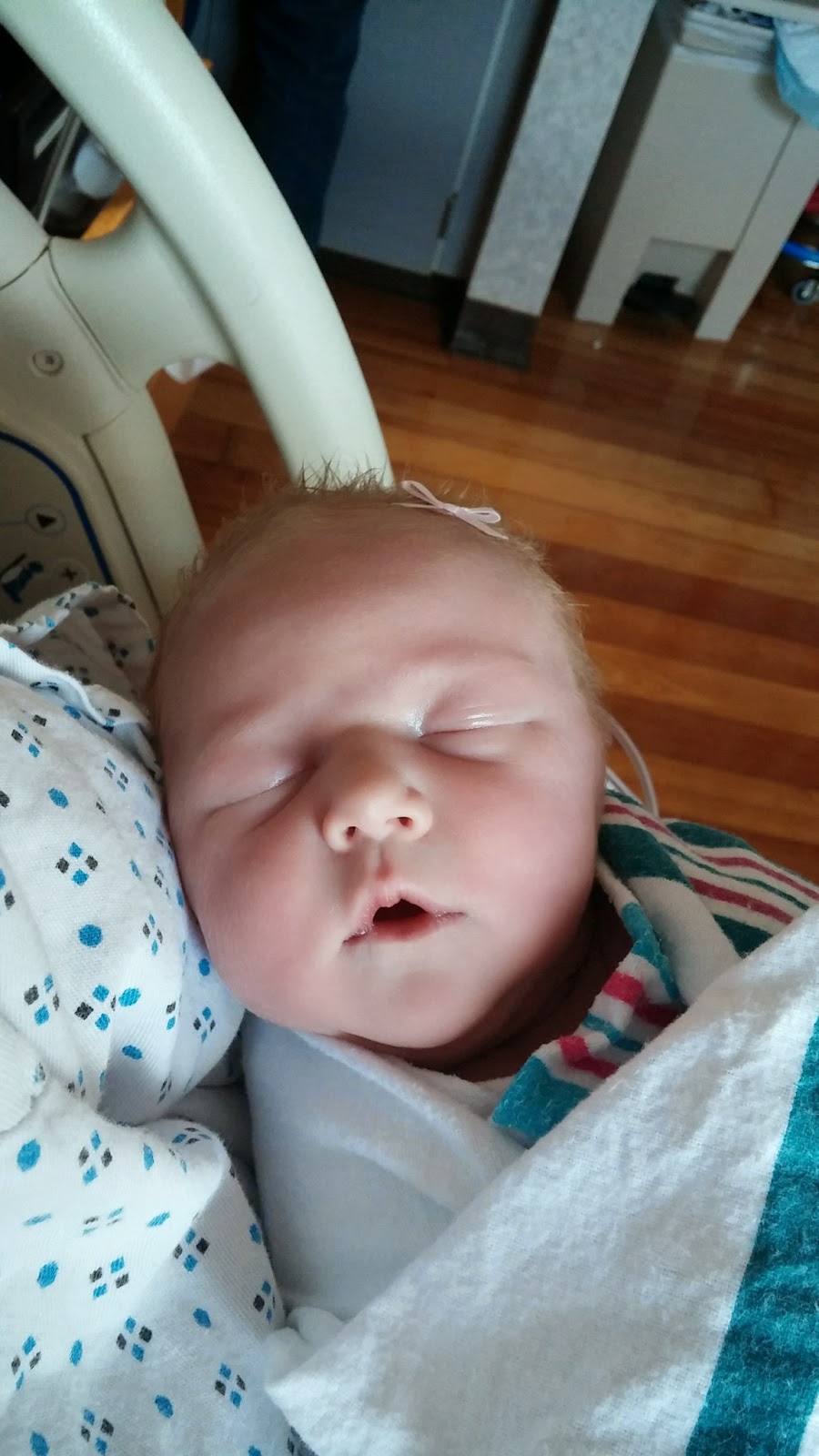 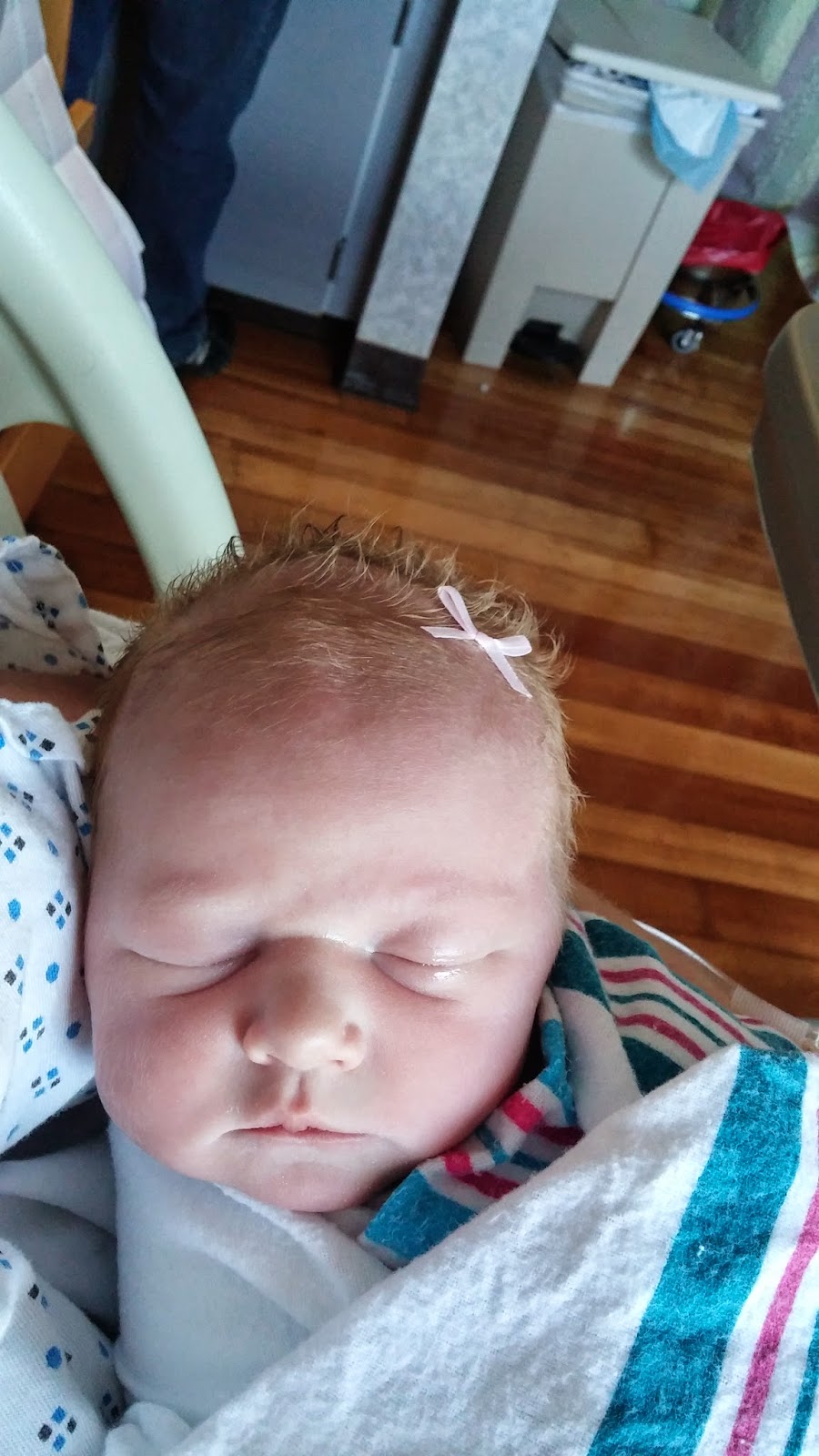 I know, I know, I said originally that she was supposed to be born on the 22nd. But for a couple reasons and with the agreement of our doctor, we changed the induction to the 21st and didn't tell anyone ha ha. So no, I didn't magically go into labor on my own.

It's also worth mentioning that we have stayed relatively healthy all winter except a couple bugs. But if course, Kennedy got really sick the Friday before and she passed it to me on Sunday. I was so sick Monday I hardly left my bed. Fever, terrible sore throat, aches, runny nose... it was terrible. After a blessing I felt a little better Tuesday but was definitely still sick going into this labor. ZE-RO--FUN!!

I got changed into my super glamorous hospital gown while the nurses checked us in and started to get things ready. Before I was even hooked up to anything my doctor had arrived at 7:45 and broke my water. Ouchie!! He had trouble getting it and it took a lot of pushing on my belly from the nurse and a couple attempts. So not fun. Then I was promptly hooked up to an IV and pitocin and my contractions started right away. I tried to hold on as long as possible before asking for the epidural. My discomfort was pretty bad this time. I don't know what made it so different but I just wasn't able to find that zone again and relax. At 10:45 I asked for some relief and the anesthesiologist was paged. In the meantime I was given some pain meds through the IV that helped, but made me very dizzy and sick. I was feeling pretty lousy and was getting emotional about it all. So we turned on Hot Rod to try and make me laugh. It didn't work. At about 11:10 my epidural arrived. I didn't feel a single thing with Kennedy's so I was expecting the same experience. That did not happen. Holy crap it hurt this time. According to him I was an "oozer", whatever that means, so again, placing it was difficult and took longer and hurt like the dickens. I was fighting back tears and wanted to turn around and punch the anesthesiologist for taking so long. I wasn't able to look at Cory because it made me want to cry even more. He had such a sad, helpless look. I know he wanted to help me but obviously couldn't. But finally it was in, relief was on its way, and I was allowed to lay down.

The nurse checked me after all the epidural drama was over (11:45) and I was dilated to a 5. She said the last 5 goes faster than the first. In my mind I assumed we still had all afternoon. With Kennedy, I was really able to relax but this time I was having a hard time. Everything was so different this time and so much more painful. I was worrying how the day would play out and I started having the we're-never-doing-this-again conversation in my head. I was already tired, sick, dizzy, nauseated, and just not ready for it at all. But slowly the epidural did it's thing and I was able to calm down and relax. I was only at a 5 so Cory headed down to the cafeteria to get some lunch and I decided to try and take a nap, thinking I could sleep off my anxiety.

I was left alone and it was just me and baby's heartbeat on the monitor. That sound really is soothing. It helped me relax. About 20 minutes later, I had just started dozing off when the nurse came back in because the baby's heart rate had escalated. In her 5 minutes of investigating I had started to feel a lot of pain and pressure in the birth canal region that was quickly getting worse. She checked me again and I was at a 7. She said she was going to run downstairs to grab a salad but to page the other nurse if the pressure got worse. She wasn't even gone 2 minutes before the next contraction was so intense and I felt like I needed to start pushing.

I obviously paged the nurse and began to flat out panic. The pain was so intense I was terrified for what was coming. Cory arrived just in time to hold my hand as I started shaking uncontrollably. I was so scared. The nurse came back shortly after, checked me, (I was at an 8) and decided to go let everyone know we were having a baby. I kept frantically pushing the button on the epidural when no one was looking. I was too scared to endure that kind of pain. Not even 10 minutes later my doctor had arrived, the baby nurses were ready and waiting, and it was time to push. It was so FAST!!

I pushed 4 times in a total of about 10 minutes tops. Because I had been hasty on pushing the epidural, I couldn't feel my contractions anymore or when I even needed to push. So the final push wasn't even on a contraction, we just decided to try it and out she came. Due to my brothers surprise, Cory and I instantly checked to make sure she was a girl before anything else. I was so proud of Cory this time. He watched her come out and when her head was out he kept saying excitedly, "There she is!!!" He even asked to cut the cord this time.

The nurses cooed and awed over her and how perfect she was. Apparently she was an exceptionally sticky baby and hard to clean but we didn't care. She was so beautiful.  Cory kept showing them pictures of Kennedy to compare faces and hair and before she even made it to the hospital, Kennedy was famous amoung the staff. They all wanted to meet her when she was brought in.

Other than the painful labor, this delivery was much more special than last time. They cleaned her off on my chest so I got to see her right away. She was super pissed and kept screaming but I just sat there bawling staring at our beautiful creation. She was perfect!!! We were both instantly smitten and felt like we knew her already.  It was so cool. And nothing has changed since then. If anything we're even more taken with her. Cory has been a major baby hog and seriously has the magic touch with her. Those two have bonded already so deeply I'm not sure I'll ever get to hold her again ha ha.

The hospital and staff were incredible as well. I was the only one in labor there so we had the full undivided attention of the nurses and I saw my doctor longer than 5 seconds. No one ever made me feel guilty about my choices and we felt very cared for.

The epidural took FOREVER to wear off so they didn't move us into the post partum room right away. My mom brought Kennedy to meet her new little sister. It wasn't earth shattering. She was excited to see her but was distracted pretty quickly by all the buttons and things to climb on. We're hoping she warms up after time.

We are so happy. Brynlie is perfect and such a sweet cuddler. When she gets hungry or gets unwrapped she gets mad pretty fast but that's ok. We love her anyway. We both instantly bonded with her and can't put her down.  She's amazing.

I didn't have much damage from delivery but my back was in horrible shape from the epidural crap. I was so so sore. Everything hurt and the first night was kind of miserable. But it's gotten better since then. Hopefully in a few more days that won't be an issue anymore.

Kennedy is struggling with the adjustment so far. I didn't expect her to be those bad but it just gets worse as the day goes on. Heaven help us. We'll get through it though.

It's such a crazy thing to be a family of 4 but it feels like we've always been this way. We're happy and love both our girls very much.

Congratulations to all of you! She's absolutely beautiful.

Congratulations! I'm so happy for you and I can't wait to meet sweet little Brynlie.

She is beautiful! Congratulations!!