So I Never Do This

This pregnancy has sucked. We know this. Let's not beat a dead horse.

But because it's been so bad I've felt super, super nasty. You know, fat, swollen, ugly, pasty, etc. There's nothing cute going on right now lol. On top of all that has been bad skin. It's been super dry and uneven and I've had some facial acne issues. Nothing bad, just texture and uneven skin tone along with lots of redness that I've never had before. Well, I've had it, but not to this degree. Since I have zero control over how fat I get, how much I swell, how my belly grows, how much pain I'm in from day to day, and everything else, I've felt like taking care of my awful skin was at least one thing I could try and control. My body may look nasty but I can control how my face and skin look to a degree.

First up on the fixing block was dryness. I have the most sensitive skin in the world and finding body lotion has been quite the battle. Aveeno eczema lotion has been the only working lotion but it was pricy for not very much. All my life I've heard people mention Cetaphil but for some ridiculous reason I've never tried it. I've known it's good for sensitive and acne prone skin but I just never gave it a try. Until now. I picked up this bottle at Wal-Mart 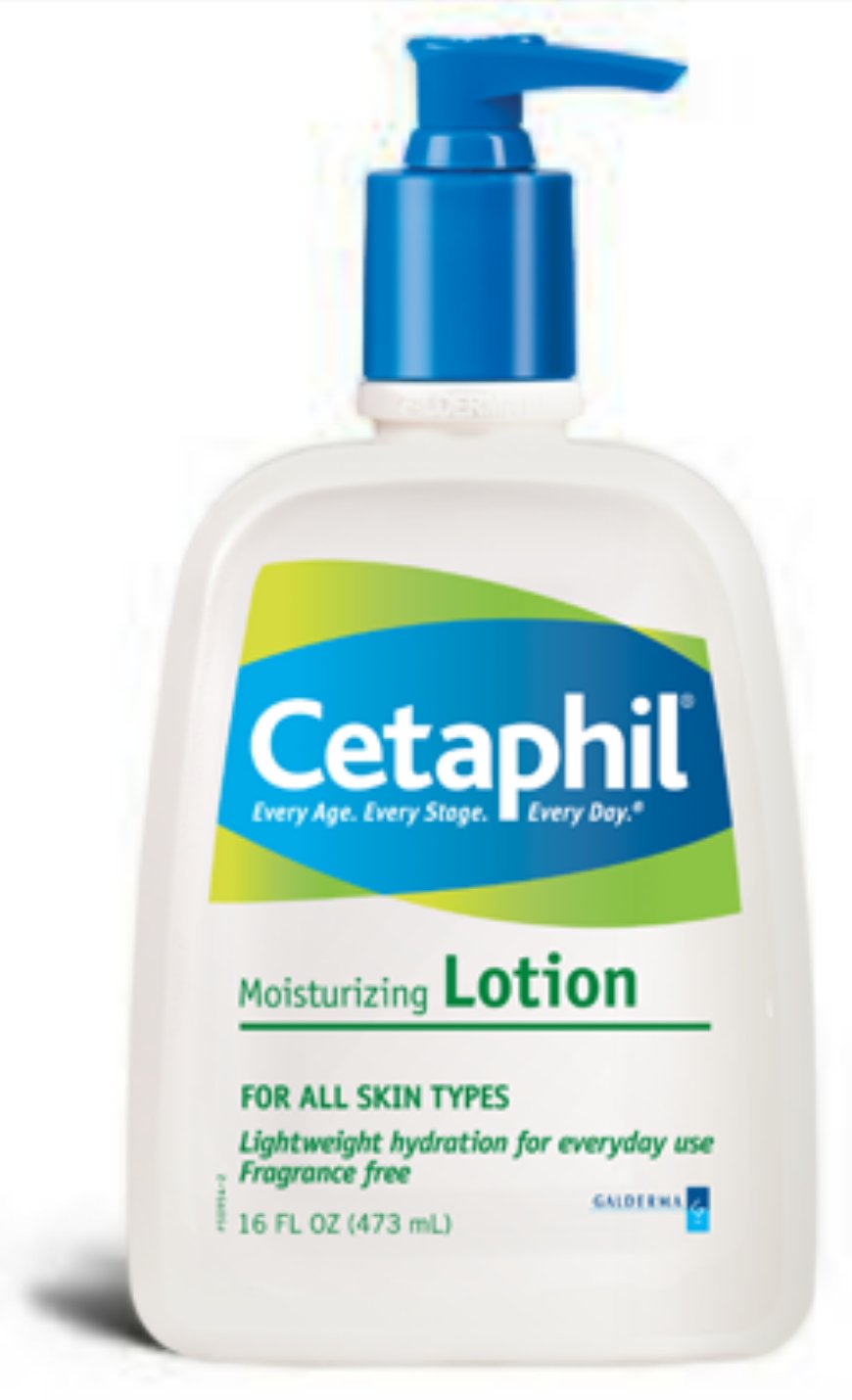 Actually I lied, I didn't get this kind. I just noticed mine is the daily advance lotion for sensitive skin, but you get the idea. I am so in love with this stuff. I get eczema badly on my arms and legs if I use anything with fragrance or certain chemicals and usually lotions without those don't seem to moisturize my skin well. But this stuff has been heaven sent. It doesn't irritate my skin at all and it keeps it quenched literally for 24 hours like the bottle says. I use it every morning after I shower and the next day I can still feel my skin is soft and moist. Moist is a gross word, let's say soft and supple. I don't know why I have waited 15 years to try it out, but I'm never going to look back. I've had for about 2 months now so it's been long enough that if any problems were going to flare up they would have by now. I highly  recommend this to anyone with sensitive skin. It too is a little pricy, about $12 but that's for a big bottle with a pump and the pump just makes life so much easier. Love it.

Ok so, my face. Ugh, my face. I have tried so much crap over the last few months. First I tried a skin care line I saw on YouTube that is only available online. It was mostly organic products that was supposed to be great for people with sensitive skin, acne, eczema, and alopecia. Well, I tried the cleanser. It helped and smelled awesome but it dried out my skin and there wasn't a big enough difference to make the price worth it. At least that was my experience. It's called Michael Todd True Organics for anyone who's interested. I bought the charcoal detox cleanser. It smelled like lavender essentials oils and it didn't irritate my eyes at all so it easily removed my makeup without trouble. I just didn't feel like it was worth the money. It wasn't outrageous like most expensive cleansers, but I'm a cheapskate so it was out of my comfort zone. The whole skin care regimen was $70. Ouch. I wasn't doing that. So maybe the cleanser with the rest of the regime would be awesome but not for me.

Ok so after that I picked up a Philosophy sample cleanser when I was at Sephora that I actually liked. It wasn't making any changes with my face but I just kept using it because I didn't want the sample to go to waste. I've seen so much hype about the Clarisonic Mia facial cleansing system but again, I'm not comfortable spending $150 on something to wash my face with. Maybe if I could save up for it but we have a baby coming and such so that just didn't seem right to me. So I looked on Amazon and found that Olay makes something similar for a fraction of the price. I'm sure the Clarisonic is way better but honestly i didn't care. Olay was better than what I had now, which was nothing. So I got it.  I started to notice a slight difference using the Olay cleaning brush but still was frustrated with my skin tone.

After lots of research online I decided to try the Proactiv+ regimen. I had super bad acne in Jr high and some of high school and had tried the standard proactiv system without much success so I was apprehensive. But this was a different system altogether made for more mature skin. I wasn't having major acne problems so I was super worried it would do nothing but dry out my face but it claimed to not do that and make your skin more radiant, even, smooth, and reduce redness. All things I wanted. Also, the whole system was only $30 which spoke to me. I decided to order it and try it. Worst case scenario, it wouldn't work. 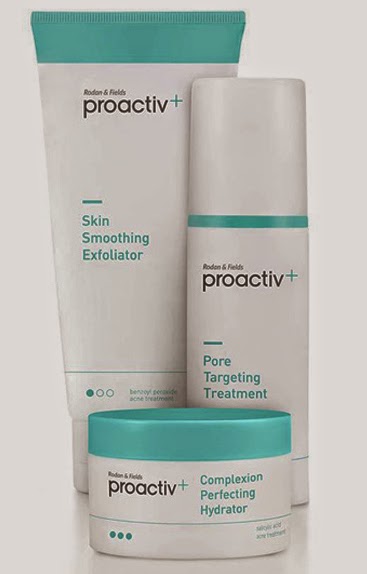 I have been using this for almost a month now and I can honestly say I am IN LOVE with this stuff. I rarely if ever blog about things like this but I'm so obsessed with it I can't contain it anymore. It's a 3 step system with an exfoliating cleanser, pore treatment, and moisturizer. I also got a free gift when I ordered so I picked the pore purifying mask which basically makes my pores disappear. I love it, but of course it doesn't come with the $30 system. You're supposed to use all three steps twice a day.

I use the cleanser with my Olay brush still at night so I get a deeper clean but just use my fingers in the morning. I was so nervous about the pore targeting treatment being too harsh and drying but I've eased into using it all over my face twice a day and I haven't had problems.

So, it took about a week to see most of the changes but instantly I noticed how smooth my skin was. My skin is so soft every day I cant stop petting my face. The texture is gone and so are the tiny breakouts I was getting. My skin improves each day with less redness and more even tone. And it really is starting to look radiant and dewy. The only problem I did encounter was it dried out around my mouth which is a really dry place for me anyway. So I use a drop of Josie Maran argon oil on that area before applying the moisturizer and it fixed it right up. Facial oils freak me out but using it combined with acne fighting ingredients has been perfect. No more dryness. My make up applies wonderfully and my skin is starting to look so good you can really notice my chicken pox scars I have on my cheek and forehead ha ha. Before they were masked by nastiness.

Now that I've tried this and have seen the results, and continue to see them, (Proactiv says it can take 8 weeks to see full results and I'm not there yet) I can't ever go back. This stuff has been amazing. I just hope after I'm done being pregnant that hormones don't mess it all up again.

If you're looking for a good skin care system, this is the winner. I didn't have acne to start so you don't have to be a pizza face to need it. According to the internet, redness, texture, and uneven skin are all caused my acne anyway. Acne isn't just huge zits everywhere. Although I hate spending money on things like this, it's been worth every penny. Go get it. Now.
Posted by Megan and Cory at 12:05 PM

just be careful with Proactiv. It is incredibly well known to leave more damage then it creates on a long term basis. When I worked with Clinique we had pt's come in all the time with super sensitive skin that had worse reactions when they were on proactiv for a long time. I hope you don't though!