As mentioned before, we've had a long and frustrating road with Kennedy and her speech. She has always been so smart and understands everything around her, but ever since she was about 18 months old, She hasn't shown any interest in repeating things, saying words correctly, or shown any concern with not being understood.

She's infamous for half words. Words that have a consonant at the end, She won't say the consonant so 'cup' is" cuh", 'down' is" dow", etc. We have tried countless things to get her to say them right and she will not try it. We know she can, she just won't.

Anyway, after a long, long time of being told, "As long as she's progressing a little then there's nothing to worry about", or" Each kid develops at their own pace", or "She will get it eventually," we waited long enough and decided it was time to get her evaluated for speech therapy.

I can't tell you how hard this has been. I've felt like I constantly need to defend her to people so everyone knows she's extremely intelligent even though she's difficult to understand. I've gotten judgmental looks, comments about her being dumb, and have felt guilt and remorse almost daily even though I know it's not my fault. We really do try to help her. She's just stubborn as an ox. We would do anything for her and her well-being, so we decided to contact some help.

Today she had her evaluation to decide whether or not she qualifies for services. Cory and I were both able to attend and I was concerned all week about how she would react to a stranger because she's so shy.  There were three ladies and us with her in a tiny little room all asking her questions and testing her cognitive ability, speech, gross motor skills, fine motor skills, etc, Just to rule out any disabilities. She did amazing! She jumped right in and started playing with them, did what she was asked, and even teased them a little. I was proud. The only thing she wouldn't do was repeat words back to the speech therapist, which didn't surprise me at all since she won't do that for us either. She tested beyond her age for cognitive ability (see, told ya she's smart!) And fine motor skills. She was right on age with everything else but speech She was clearly behind. The therapist qualified her for speech therapy which overjoyed me. She really needs this.

Our next step is to meet with another lady and create a plan for her and then speech therapy can begin. They only offer services until she turns 3 and then she's turned over to preschool where they continue to help her in a school setting. I've been agonizing over whether or not to join the neighborhood joy school or have her go to preschool and decided to wait and see how this went before I made a decision. I'm so glad I did!!

I feel relieved and excited but also a little nervous. I'm hoping the speech therapist is able to coax her to repeat words and get her to improve her diction. I'm so excited to see what's been locked up inside her and to finally be able to communicate with her and understand what she says. Hopefully we can get this girl talking! 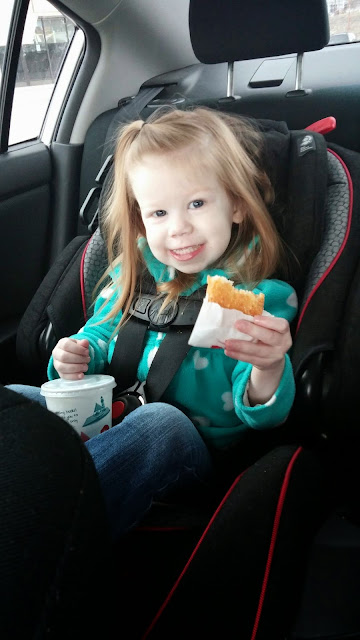