In case you missed it, we have big news: 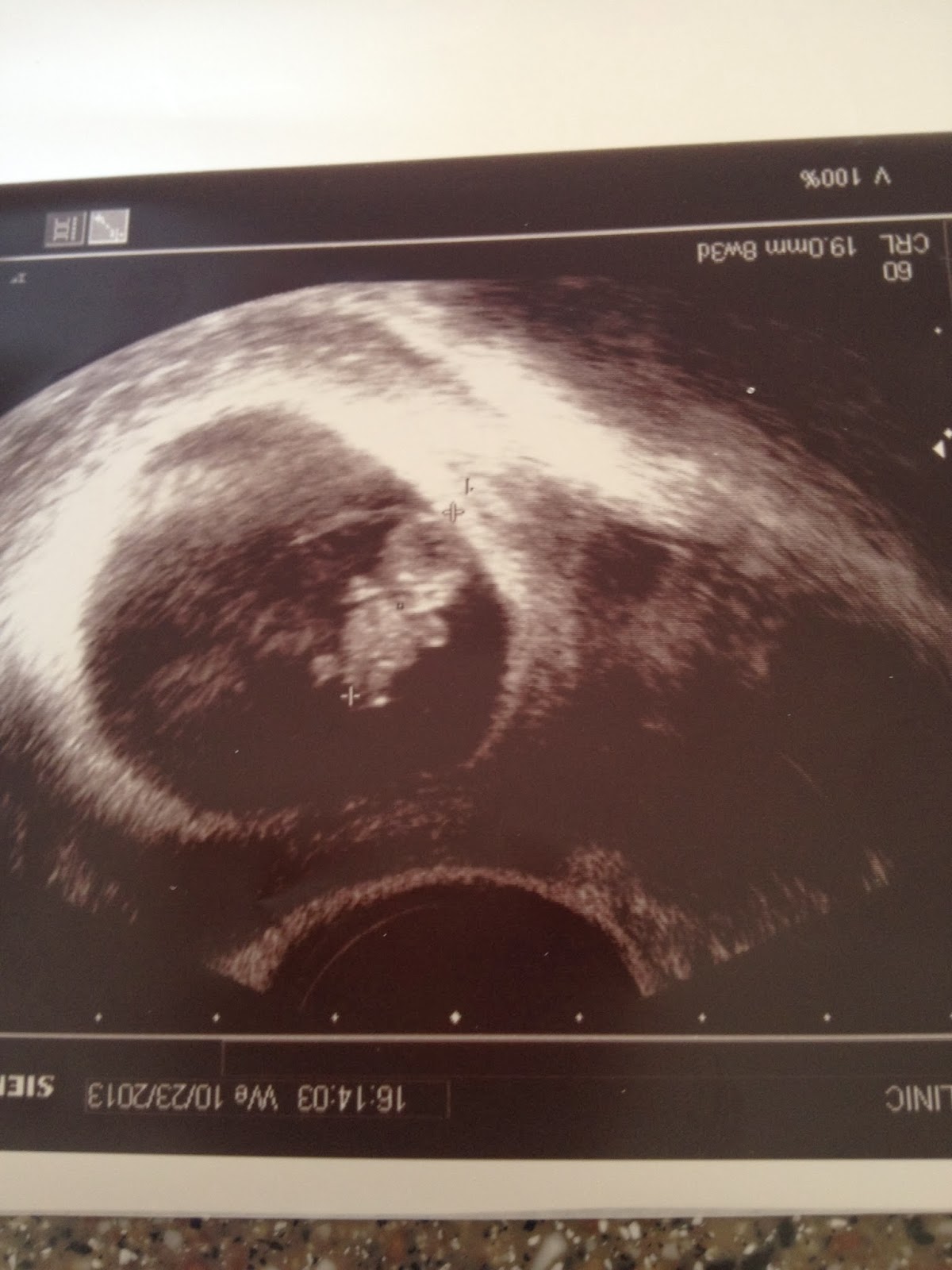 We're having another baby! I can hardly believe it myself. Cory was super excited right away but it took me a while to warm up to the idea. We felt it was time to bite the bullet in March and start trying for the next child. This was also the same time that my health started to dive bomb, and two weeks later the landslide happened at Kennecott. So we had to practice some real faith in the Lord's timing that everything would work out. 5 months later, we got the positive test! The timing still isn't perfect. It's really messed up the investigation on what the heck is happening to my body. There's a lot to explain there so I'll have to do it in another post. And things aren't peachy financially yet but we have hope it'll all work out.

We don't really care what the gender is. Cory wants a boy, obviously. And if we are granted with such we will name him Logan. I've loved that name for 12 years now. I can't wait to use it! If it's a girl that's totally cool with me (not sure I know how to raise a boy?) and we probably won't ever pick a name for her. Names are hard.

This pregnancy has been harder than Kennedy was. I was already suffering from extreme fatigue and unexplained weight gain before I got pregnant. Now I'm packing on the pounds and I've never been so tired in all my life. That's not even a correct enough statement. Just taking a shower wears me out. I think there's been two days total that I've gotten Kennedy and myself ready in the same day. I just don't have the strength or energy for it without some kind of caffeine intervention (not pop). I've also been a lot sicker this time. Still no throwing up (I had one really close call) but I have been constantly nauseated and have just felt terrible. I forgot how much I hated this whole process.

So anyway, on to other news, about a week before we found out I was pregnant my friend had asked me to run a Halloween half marathon with her. It was 6 weeks away, which wasn't much time to train but I figured it was ok to try it. Then I found out about the pregnancy. My instincts told me to not go through with it, but I was determined to have a healthier pregnancy this time around and this was a great way to keep me motivated. Plus I thought it would make a cute way to announce the pregnancy to everyone.

Training went really well until I hit about 6.5 weeks and that's when the exhaustion and sickness hit. Running became extremely difficult. At 7 weeks I had my last long run planned and it ended up causing pretty intense pain in my pelvic region that scared the crap out of me!! I immediately stopped all physical exercise and waited for the following week when we had an ultrasound with my OB. I explained everything to him, he said everything looked perfectly normal and that pain happens because of the body stretching and getting loose, and Ok'd me to run the race. I was still apprehensive and I knew it was going to be painful, but I didn't know just how painful until today.

So, we had registered to run the Provo Halloween Half. I had heard great things about this race and was really excited. It was supposed to be a big costume party with a fast, downhill course and "the most fun you can have in Provo." That's their motto anyway. It's all lies. Here's what happened:

I have never been so disappointed in a race before. It was terrible. And the "fast" course they promised? All the downhill that I was relying on to get me through this race? Yeah... didn't happen. Like I said, the downhill was mixed with big hills and then at mile 6 when we joined up with the Provo River Trail, it was all flat. It was MISERABLE!!

My experience was even worse. I obviously wasn't ready for the race so I had no time goal. I did pretty well the first 6-7 miles and even made some great time at first. And then the pelvic pain hit me like a bus. All my muscles in that area just stabbed at me. My hips began to hurt like crazy too which made moving my legs really, really hard. I didn't have the downhill I had been counting on to help push me along, so I just tanked. I had to walk the majority of the rest of the away. I can't remember anything hurting that bad in my life. Not even labor. And I'm not kidding. I had decided I was going to quit at the next aid station (around mile 10) and called my mom to let everyone at the finish know that I was alive and taking forever because I hurt so bad and that I might quit. I didn't even get past "I hurt so much" because I lost it and just started to bawl. My mom hurried and gave me a pep-talk and told me to keep going. I tried to harness that and think of Kennedy to get me there faster because I had missed her so much but my body just wasn't having it. At this time I passed some spectators who noticed from my shirt that I was pregnant and they started cheering really loudly for me. One girl stood up and said, "You're my hero!" This made me lose it even more and I can't type it without crying because it was just what I needed to keep going. I'm so grateful for people like that!

Somehow, I made it the rest of the way and just before the last turn to the finish line I saw Lisa. She came and walked/jogged with me while we both cried. I was hating every single step and she was trying to make me feel proud of what I was doing. That meant so much to me. I passed my family and I grabbed Kennedy to run the last little part with me across the finish. That was the highlight of the race. People were cheering for us and she was loving the excitement. She's a good little runner! Finally, FINALLY the race was over!

Although I'm proud I finished a half-marathon while pregnant, which I never imagined myself doing, I will never, ever do it again. It was the worst thing I have ever done. I am so grateful to everyone who came to support me though, and for their encouraging words and love.  It meant so much to me!

I stayed the night in Provo with my friend, Marissa, and we had a total blast! After it took me 2 solid hours to get to her house (not even joking, traffic was a nightmare) we had fun out on the town going to dinner and eating ice cream and watching Grey's Anatomy before bed. She was so supportive and dropped me off at the bus loading zone early in the morning and came to cheer me on! She took most of the pictures I'm about to post, too :) That, there, is a good friend, folks!

Ok, so let's look at the experience in photo's now. They are in no order because I am way too tired to figure out how to organize them.
Here's Kennedy and I running to the finish 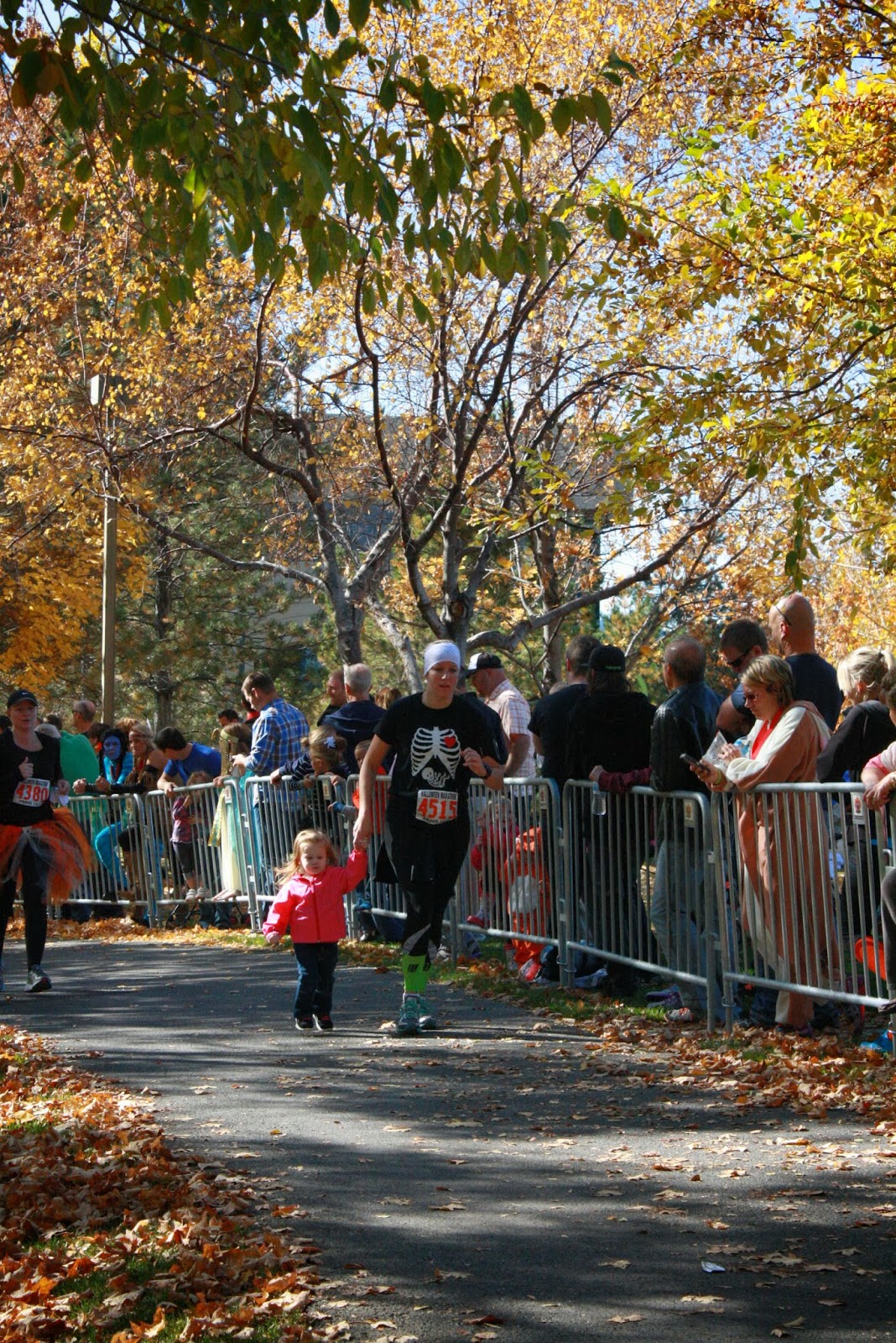 And crossing the finish line 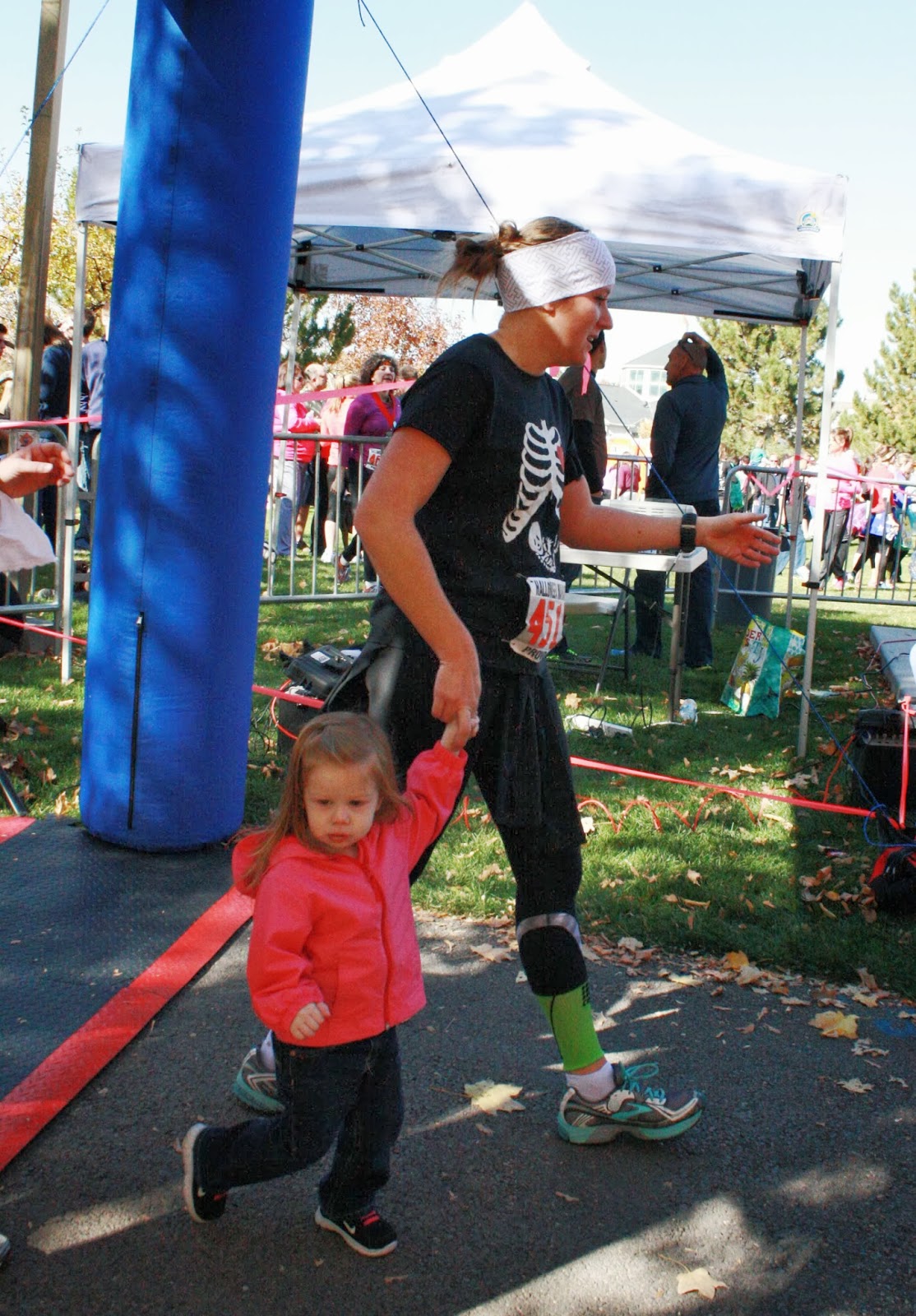 And here's an adorable picture of her that Marissa took! I wish she would smile, little butt! 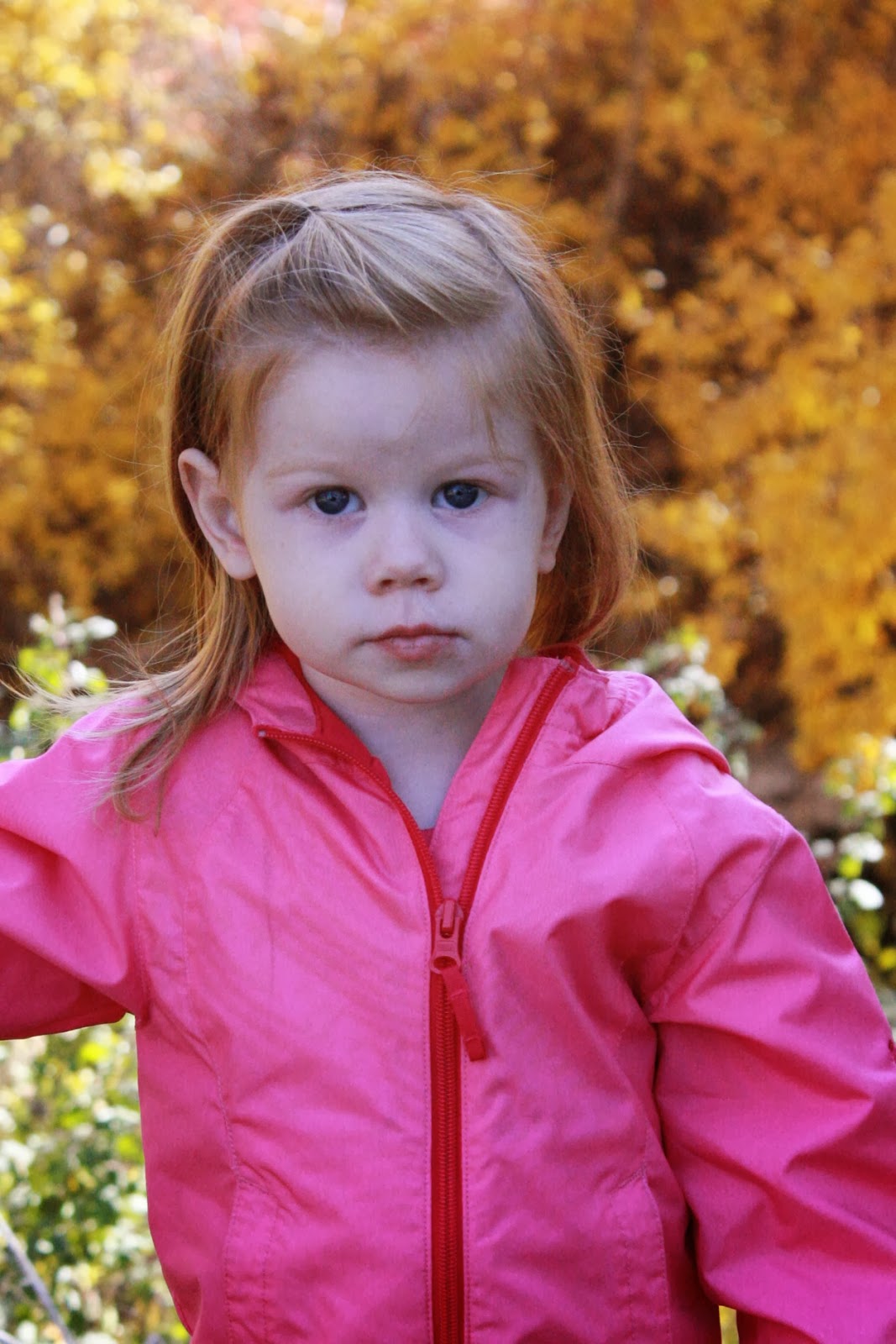 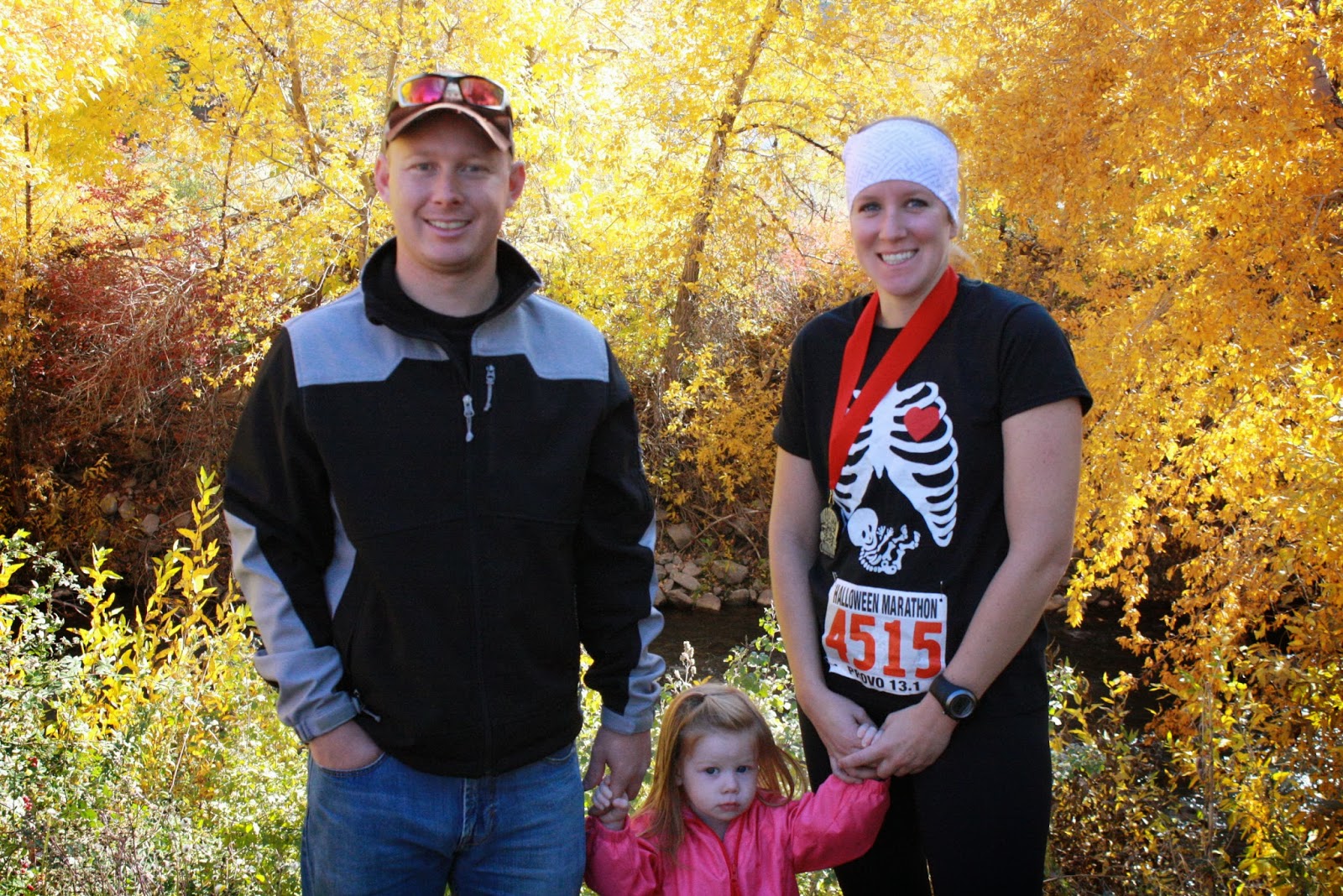 Hillary brought a little puppy that she's trying to nurse back to health. Kennedy was obsessed I guess. She sure loves dogs. 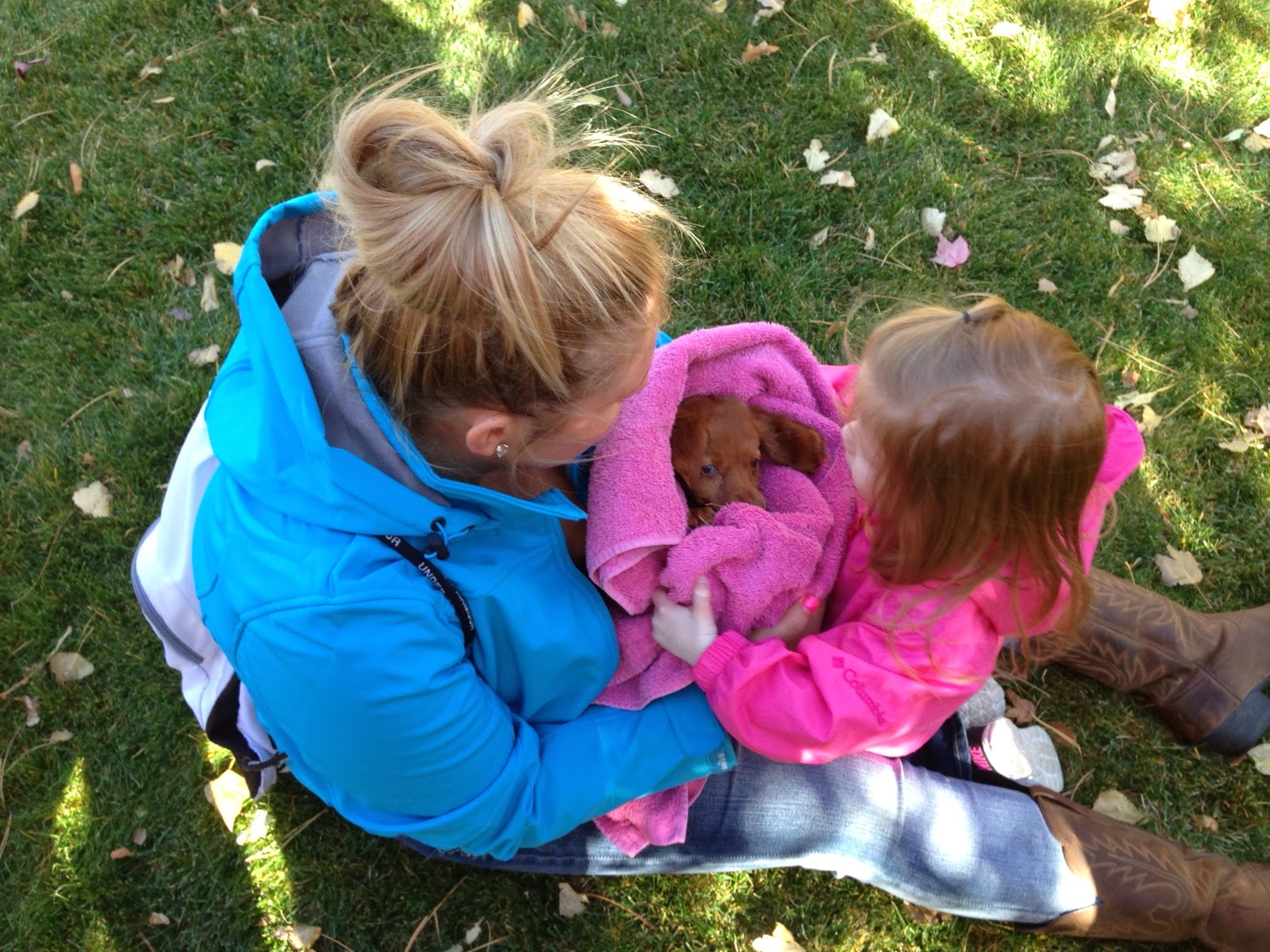 Here I am hobbling to the finish. 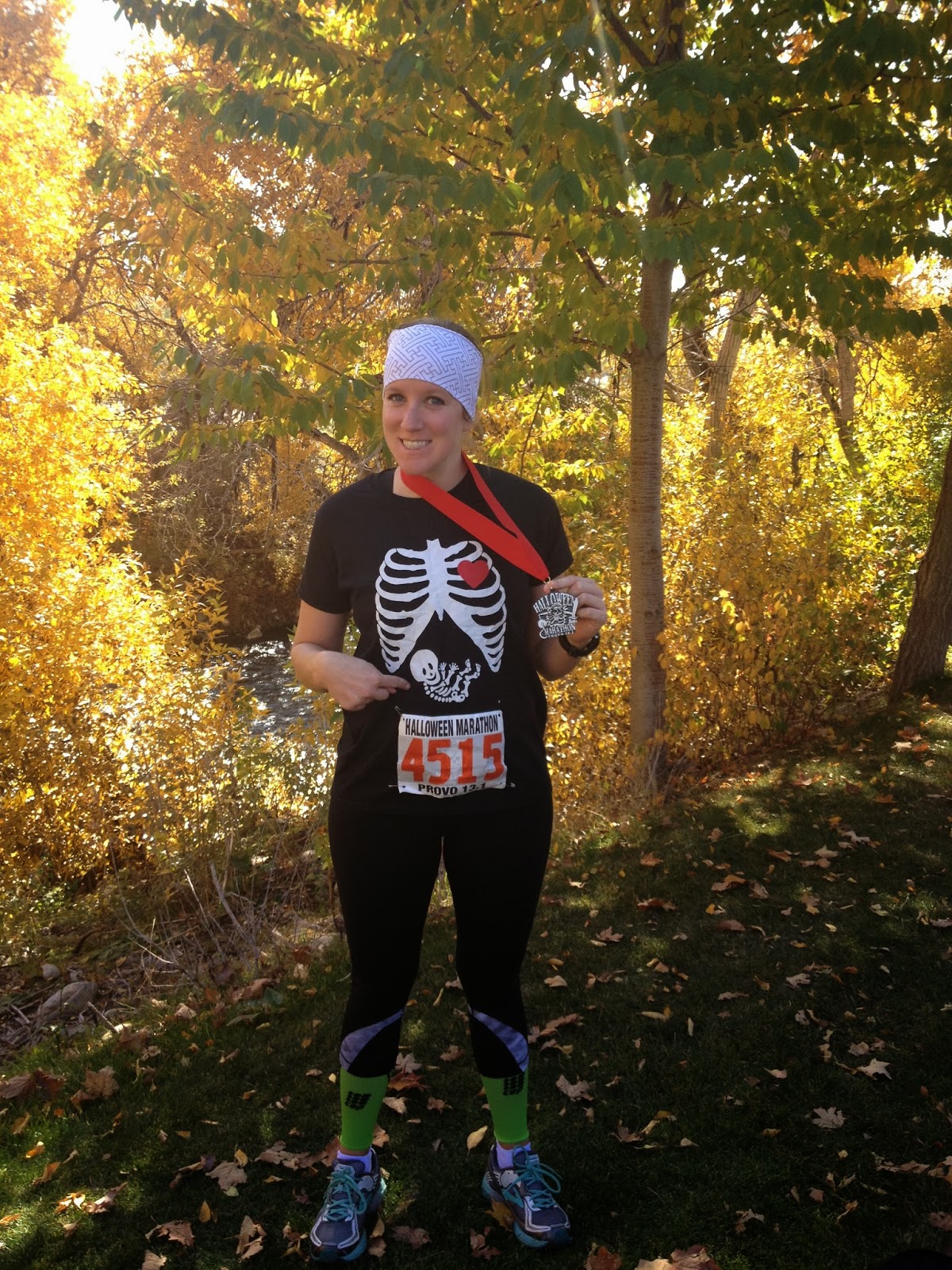 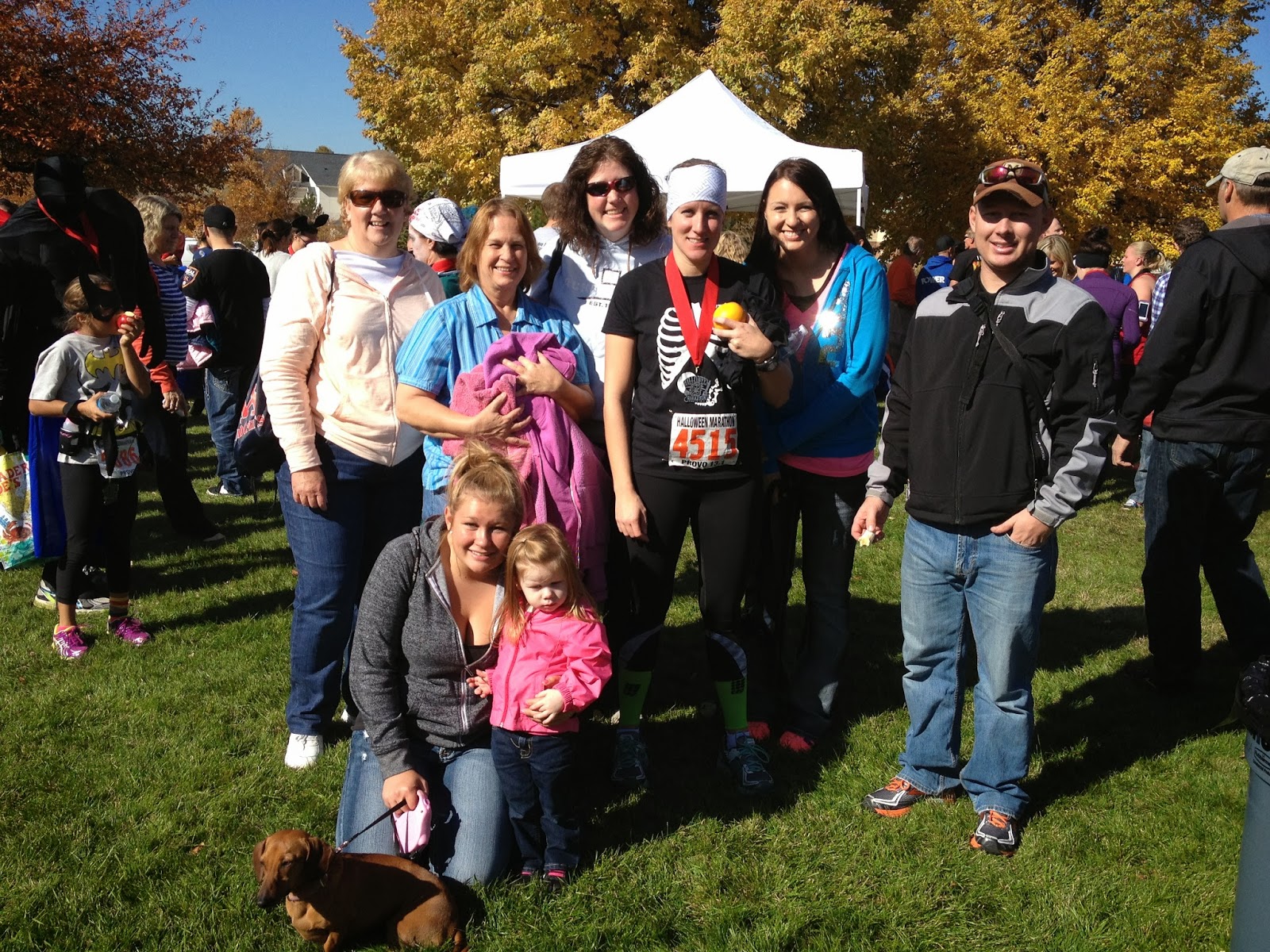 And Michelle and I at the start. Notice how deserted it is... 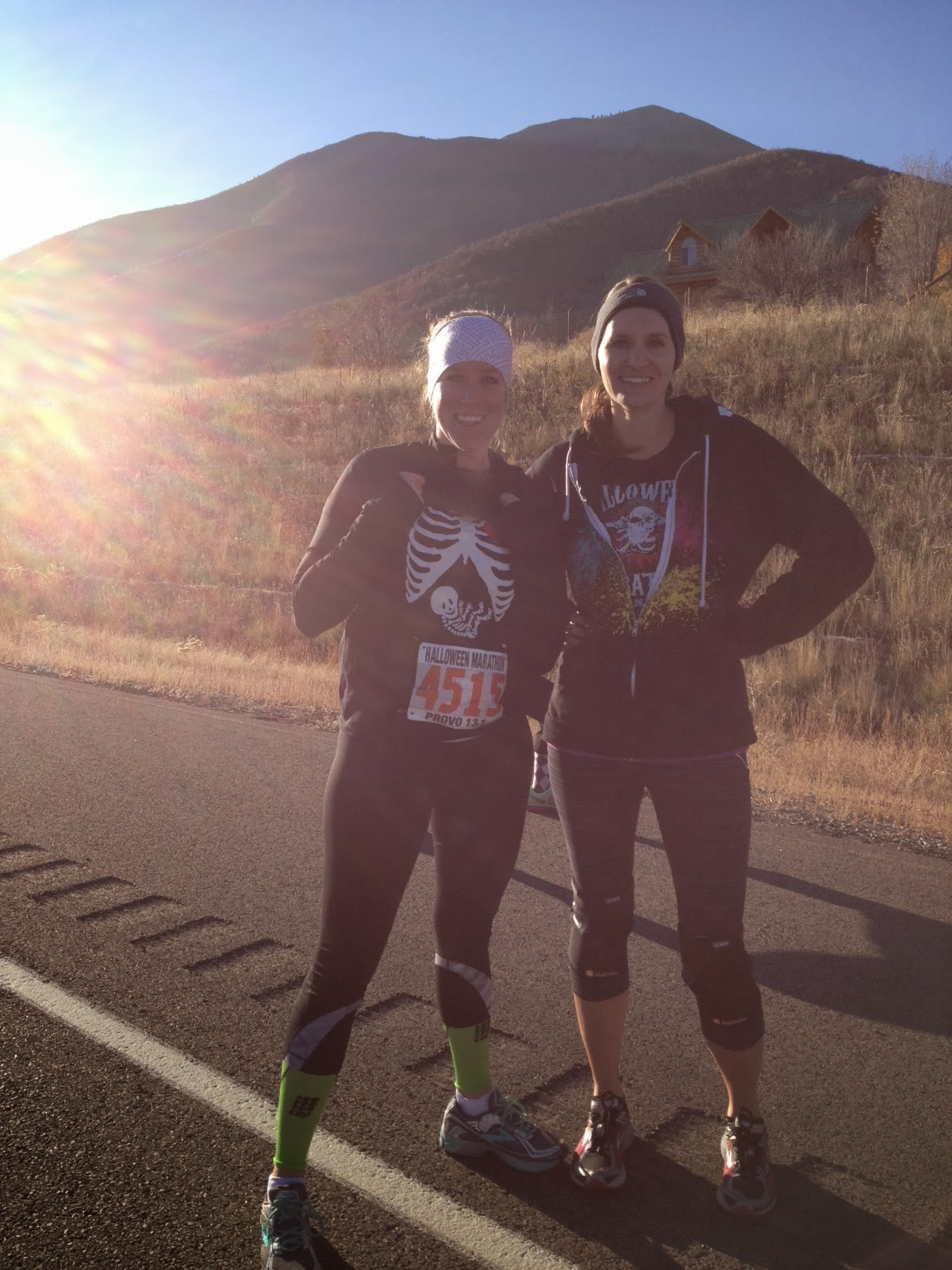 So that was my day in a nutshell. Almost died, finished a race, can't walk at all now. But the cat is out of the bag on the baby news.
Posted by Megan and Cory at 10:08 PM

That race sounds AWFUL! I have read some of the facebook comments, and it sounds like the organizers just keep making excuses rather than admitting that they made mistakes. I am sorry it went so badly. Kudos to you for hanging in there, despite the baby not really making it easy on you. You did awesome!!!