About two months ago, my friend Marci and I went tanning because we were so painfully sick of the winter and no sunshine, we had to get some vitamin D before we went stark raving mad on the whole town.

Since then, I've gone a little here and there because
A) tanning is kind of addicting
B) it's free with my gym membership
C) it really did help with the depression
D) it majorly helps with my eczema

So yesterday, there I was at the tanning salon again, doing my thing. I was trying out my new tanning lotion I had purchased on amazon that had fabulous reviews and was only $13. If you know anything about tanning lotions, they're sickeningly expensive. Anyway, I was in a hurry to get undressed and get the lotion on before my allotted time ended and the bed turned on without me in it.

After applying a fast coat of lotion, I grabbed the goggles and hurried into the bed, while wiping my eye that at that moment had a bad itch...

I don't know what is in that lotion (acid? Paint thinner?) but approximately 30 seconds later the skin around my eye started to burn. It was tolerable at first, and I thought maybe it was just going to be irritated for a little bit since the skin around the eye is so thin and delicate and my hands had obviously had some residual lotion left on them that got on my eye.

So I waited. And waited. And the pain got worse. And worse. By the time dinner rolled around, I felt like someone had beat me with a curling iron. It was ridiculous!! I couldn't even touch my eye. And it was so red!!! I sported a huge red streak down my top and bottom eye lids where my tainted finger had been dragged.

Before bed I soaked it with a cold rag which helped a little. I then washed my face in luke-warm water and tried to get my makeup off but I could barely touch it. Since it was so tender, I also applied neosporin to the red parts and that helped a lot in keeping the pain away.

But then it started to swell. My eye lid got huge and puffy! I went to bed hoping it would go away and woke up this morning with it still big and nasty looking. But on the plus side, the pain was way down. I can touch it easier and it doesn't hurt on its own anymore.

The swelling has gone down a lot throughout the day which I'm happy about. It's also less red but still noticeable. Hopefully by tomorrow it'll be all healed.

I have NO idea what is in that lotion that caused such a horrible reaction. I can't pronounce a single ingredient on the back. All I know is that when products have the warning "avoid contact with eyes" they mean it because apparently it'll try and burn your face off. I hope tomorrow I can look like me again and not like Quasimodo.

Oh, and just for fun, after I had tried to wash my makeup off and my eye already ached badly enough that I had trouble opening it, fate decided it needed a good laugh because while applying toothpaste to my toothbrush, the bristles flipped backward and send toothpaste directly into my good eye. You may notice my right eyeball is red and irritated. That's why. I had to "laugh" because that's never happened to me before. But of course, it had to happen then.

I hope to be forgiven for the language that was used. 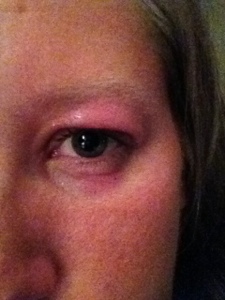 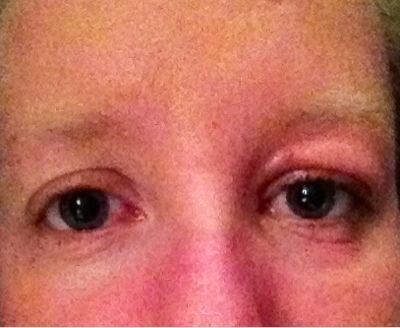