Although with the way things are going, that may not be a smooth transition.

Kennedy is still her sweet, feisty little self but she's become very pro mommy. VERY. I think it was because I finally tried leaving her at the gym daycare and it did not go well. They called me after 20 minutes because she couldn't stop crying :(. Ever since then she's been super clingy and won't even let Cory hold her. It's really irritating. But, she will have to get used to it. I'm not going to stop taking her there.

She's also developed a giant fear of wind. It happened in Moab when the wind gusts blew sand in our eyes and faces. She's screamed and cried. Now anytime she's outside and there's more than a breeze she gets really scared and buries her head in my chest and cries and clings to me like she's going to blow away. Again, very sad. Up until now she hasn't been afraid of anything.

At least she's not a total wuss. She had her flu shot booster this morning and cried for about 10 seconds then stopped. The whole thing takes about a minute. It was flu shot day so there were lots of kids and moms in the waiting room. We came out and she was smiling again and everyone was amazed she wasn't crying. I half expected a standing ovation with the looks of awe we were getting. It was hilarious. Go, Kennedy!!

Her vocabulary is still about the same. She says "here you go" and "what's that" a lot. She does say thank you without being asked sometimes. However, she's stopped talking as much. It makes me sad she's not spitting out words all the time like she used to. I'm sure it'll get better, it's just weird she suddenly stopped. She's also been calling me daddy instead of mommy... Not thrilled about that. She's most persuadable right before bed, so we read books and try and say names and make animal sounds. She points to her tummy and nose when asked and we're working on other body parts.

She's hilarious and innovative. She keeps me on my toes all the time. She flipped out about the snow the other day. She saw it through our small kitchen windows above the counter and pointed and said "wow!" And then ran over to the sliding glass door and waved at the snow and kept hitting the glass saying "whoa!". She was excited! It was so cute. There's a picture below.

She's also started taking her clothes off... I hate that.

She climbs everything. Her favorite is the kitchen table.

She loves to pretend she's talking on the phone. She'll pick up our phones or anything that resembles one, says "hello" then chatters and bunch of jibberish, then pretends to laugh. It's hysterical.

She loves making messes and playing with friends. She's makes me so happy I feel like I could burst. 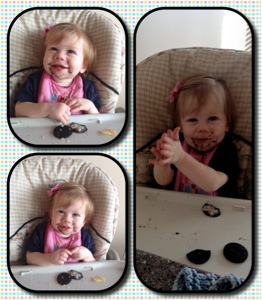 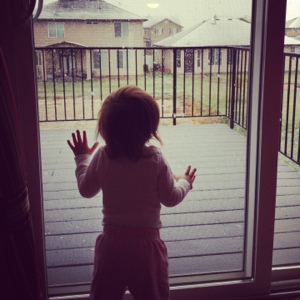 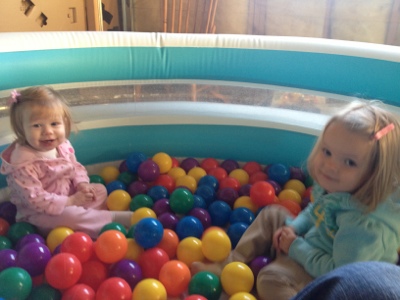 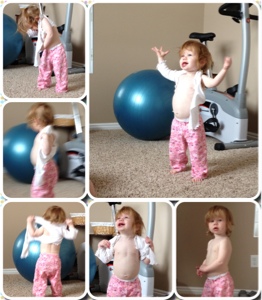 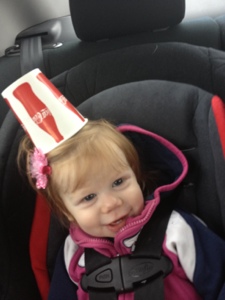 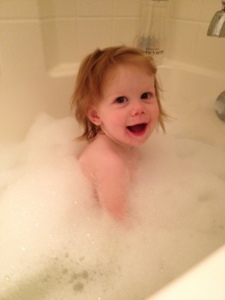 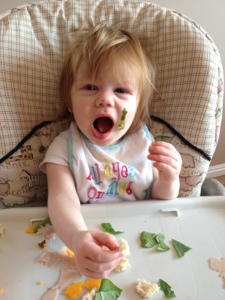 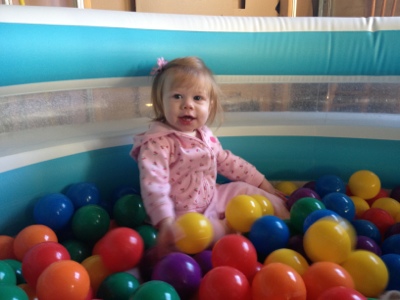 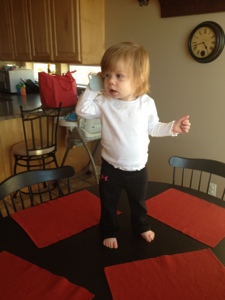