As Latter-Day Saints, all our lives we've heard the Sunday school answers at church:
Pray
Read your scriptures
Go to church
Pay your tithing

I've really been struggling with church attendance lately. I go and I really want to be there. But Kennedy makes it so hard. I don't want to get into much detail about it, but week after week I don't get to listen to lessons or feel the spirit and week after week my spiritual reservoir has dropped. It's taken a gigantic toll. I know it has. I haven't ever lost faith or started doubting, but I've felt less happy and angry and annoyed at the world. Lacking that spiritual nourishment really brings a person down. So I've felt out of touch with Heavenly Father and I feared I was losing my relationship with him. I didn't understand why I wasn't getting any help either. I prayed for help to have spiritual experiences and never did and every week Kennedy would be on another exploring adventure that required supervision. It has been really, really tough.

So let's switch gears for a moment. As I mentioned before, I came down with a cold this week. I had signed up for a half marathon months ago for this weekend and now I was sick. I was devastated.

To explain the devastation, because I don't think some people get it, I need to explain why this race and exercising in general are so important to me. I don't get to do much for myself these days. My whole world revolves around Kennedy and her needs. Exercise and running are the things I get to do for me. I work hard at them and I get to see the results of my labor. It's satisfying and comforting and makes me feel happy. I worked hard all summer for this race. It meant a lot to me and doing well as a result of my hard work, meant a lot to me, too.

So you can imagine how upset I was when I got sick. I even blogged about it. At first I felt like it was a punishment from the Lord for being so negative and grumpy all the time lately. But this week has been absolutely incredible. Getting sick has been a giant blessing, not a punishment, and it's one I never saw coming. It has been the answer to my prayers to have spiritual experiences and strengthen my relationship with the Lord.

All throughout the week I've had a calm feeling that everything would be ok. I was blessed with so much comfort and peace. I really needed it because stress does not help you heal. No matter how tired I felt or how much my throat hurt, I knew deep down I was going to be ok.

I got better much faster than I ever have before. I know the remedies I used were part of it, and were part of the Lord's plan because I NEVER remember to take medication that diligently. I also had help from the Priesthood power and the prayers of others. I know, it sounds silly having people pray for me for a race. I never asked them to, they just did because they rock my world. But I could feel their prayers. One night I finished my prayers before Cory and when I sat in bed, I felt so warm and peaceful and I knew Cory was praying for me right then. I even asked him about it and he said he was.

I've felt so calm and reassured about this race. Usually I psyche myself out and question whether I trained hard enough or if I should have done more. But I didn't this time around. It didn't matter. I knew I was ready and all I needed to focus on was getting healthy enough to accomplish it. I needed rest, not another run.

I have felt incredibly nourished this week both physically and spiritually. I feel like I'm in a happy place again. I can't even tell you how much I've needed this. I even came across scriptures like this one in my daily study:
22 And as many ... as were healed of their sicknesses and their infirmities, did truly manifest unto the people that they had been wrought upon by the Spirit of God, and had been healed; and they did show forth signs also and did do some miracles among the people. (Book of Mormon, 3 Nephi, Chapter 7)

So yeah, I'm manifesting that I was healed. Both spiritually and physically. It's been so amazing!! Don't ever doubt that the Lord knows what He is doing!!

That being said, the race was AMAZING!!! I was perfectly calm once I left the house Friday night. We stayed at my friends aunts house who lives in Mill Creek. It was so nice of them! I mostly thought about Kennedy and Cory the whole time. I really missed them.

The race was so fun! It was dark and freezing at the top of the canyon but we passed the time in our space blankets, talking to the two hour pacer. He was really cool. The race began and it was still pretty dark, but once it lightened up the scenery was amazing. The leaves were gorgeous and the sound of rushing water from the river was calming. I've always sworn I can run better with music but not during his race. I'd have a harder time when I would put my headphones in vs when I didn't.

I started crying a few times during the race when I thought of all the support I've received and the help I received from my Heavenly Father. I was doing amazingly better than expected and I've never felt so humbled and grateful.

There were some snags in the race though. A wretched side ache made me have to drop back and stay with the two hour pacer and my friend I ran with and I got separated. But it went away and I was able to tear it up after that. I had a minor pee incident that actually makes me laugh but I won't describe it. The last mile absolutely killed me. We were out of the canyon at this point and my legs were dead, my feet were in pain, it was all flat now, and with the poor air quality, I was wheezing like crazy, even with my inhaler. My last mile was two minutes slower than my pace throughout the whole race. Bummer!! But I kept thinking of Kennedy and cory and my family at the finish line and kept going, even though I sounded like I was going to die from no air and I kept moaning in pain.

Amazingly, I beat my goal!! With the illness and my knee problems, I didn't think it would happen. But I did it. I can't describe how amazing it feels!! Part of me wonders what I could have done had I not had those issues but maybe someday I'll find out. I'm still freaking proud of myself and there are no words to describe the gratitude I have in my heart for this amazing experience and the help I had pushing me along the way. There was one part that was slightly uphill and I didn't want to slow down so I said silently, "ok Heavenly Father, help me make it past this", and there was a huge wind gust immediately after I said that, that stopped when it started going downhill again. Yeah, I cried.

What an incredible experience! What a testimony builder for me! I will never forget this race and all that happened to help me get there. It was supposed to be a fitness endeavor and ended up being a fantastic spiritual experience. I loved it!! A huge thank you to Cory and my parents for coming out to see me. It meant so much!!

Trying not to freeze waiting at the starting line 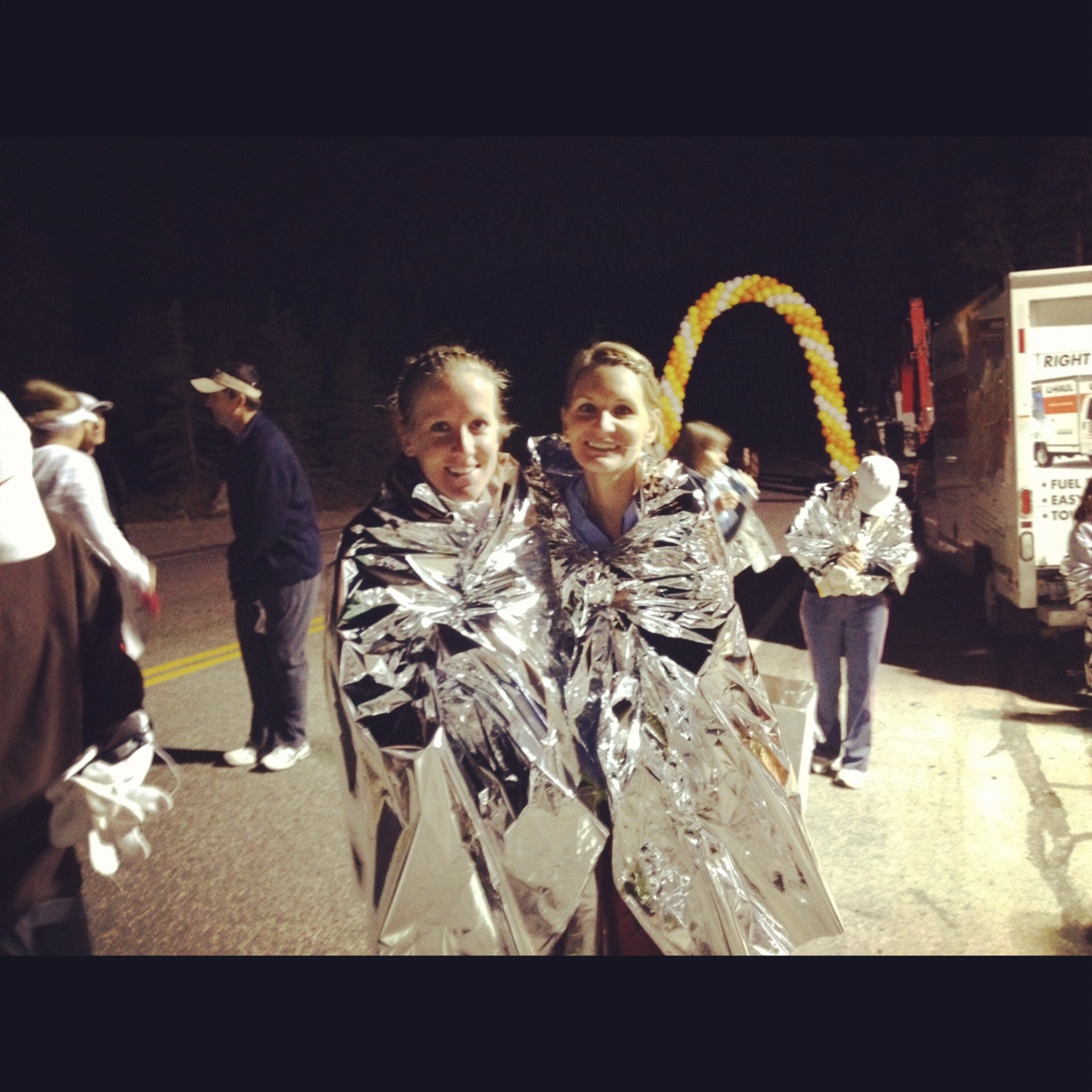 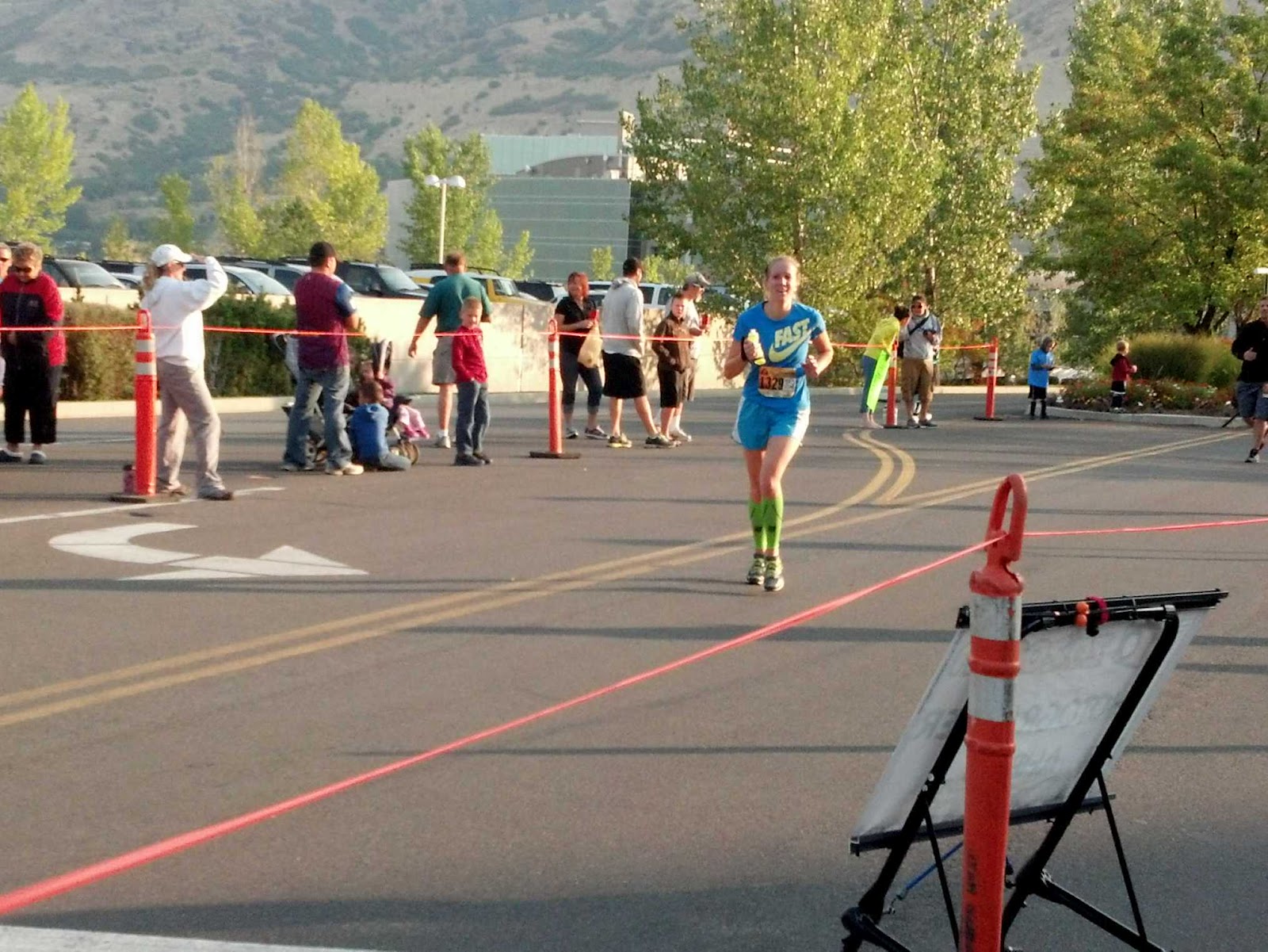 Running past my family! 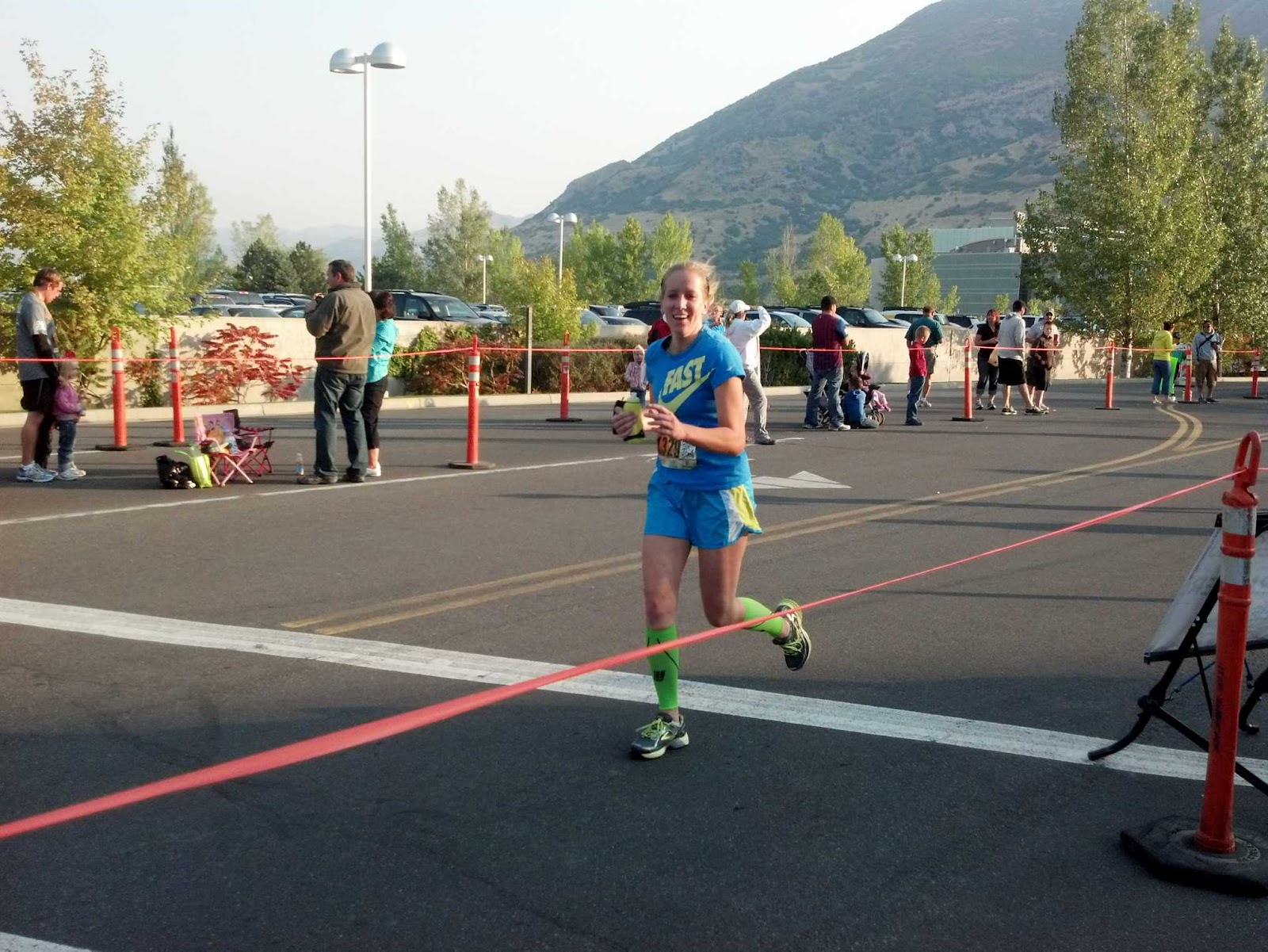 I had to work hard to get Kennedy's attention! 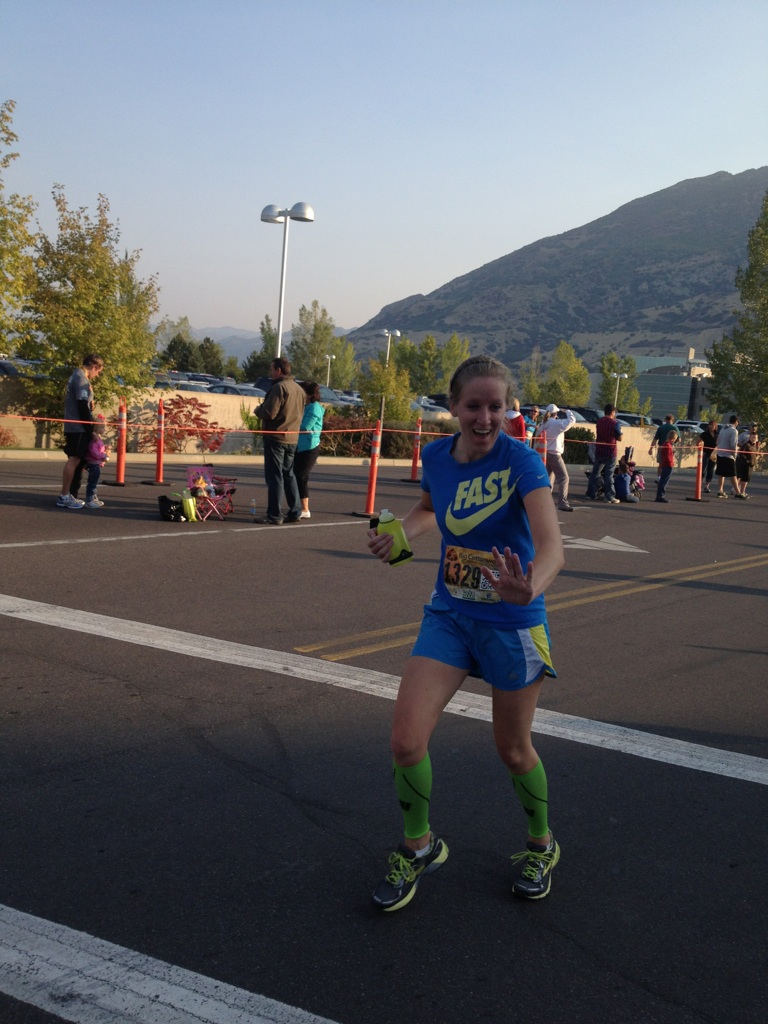 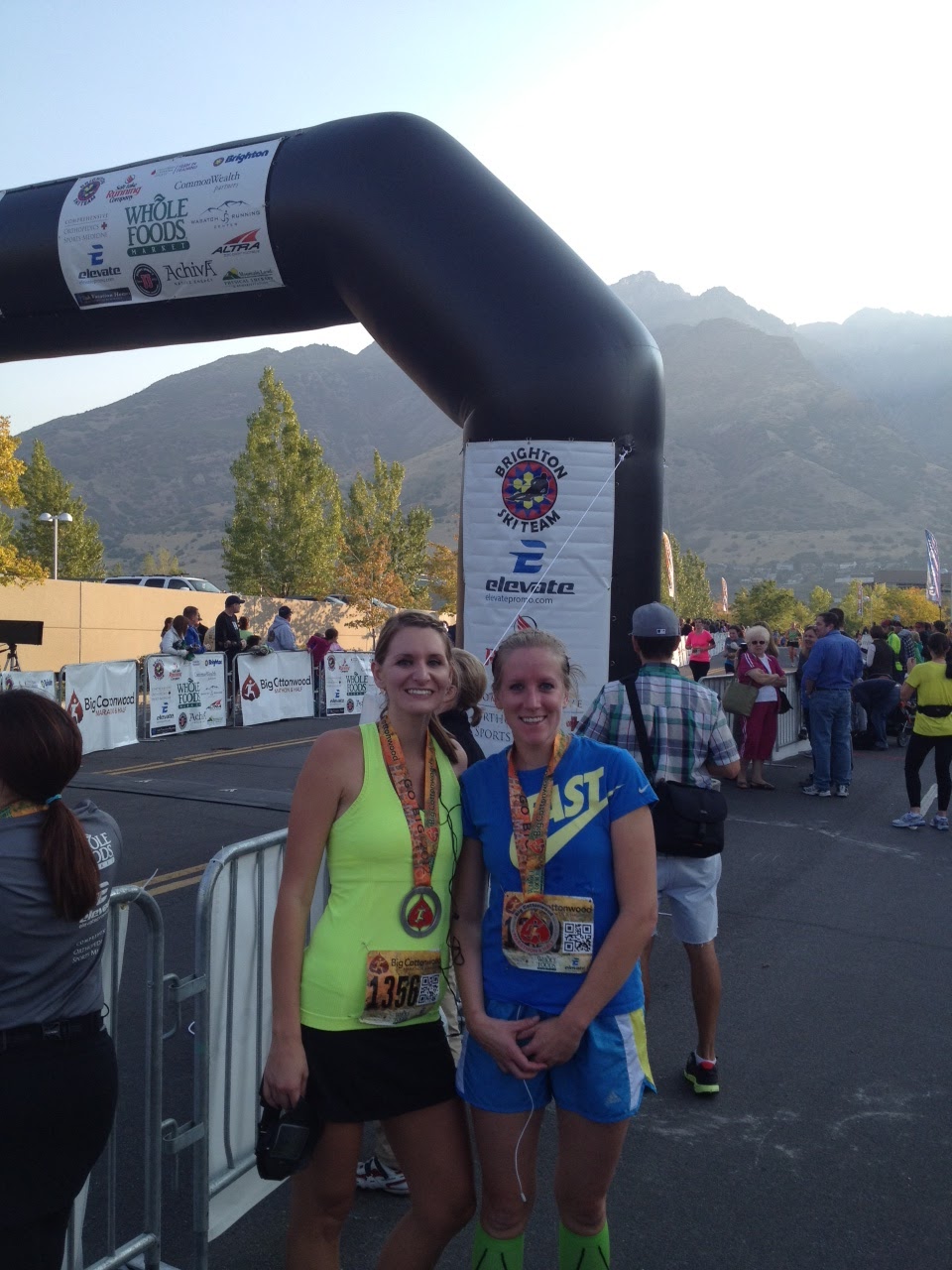 I missed my sweet little girl. And don't mind the hat, Cory was in charge of dressing her that morning so... yeah 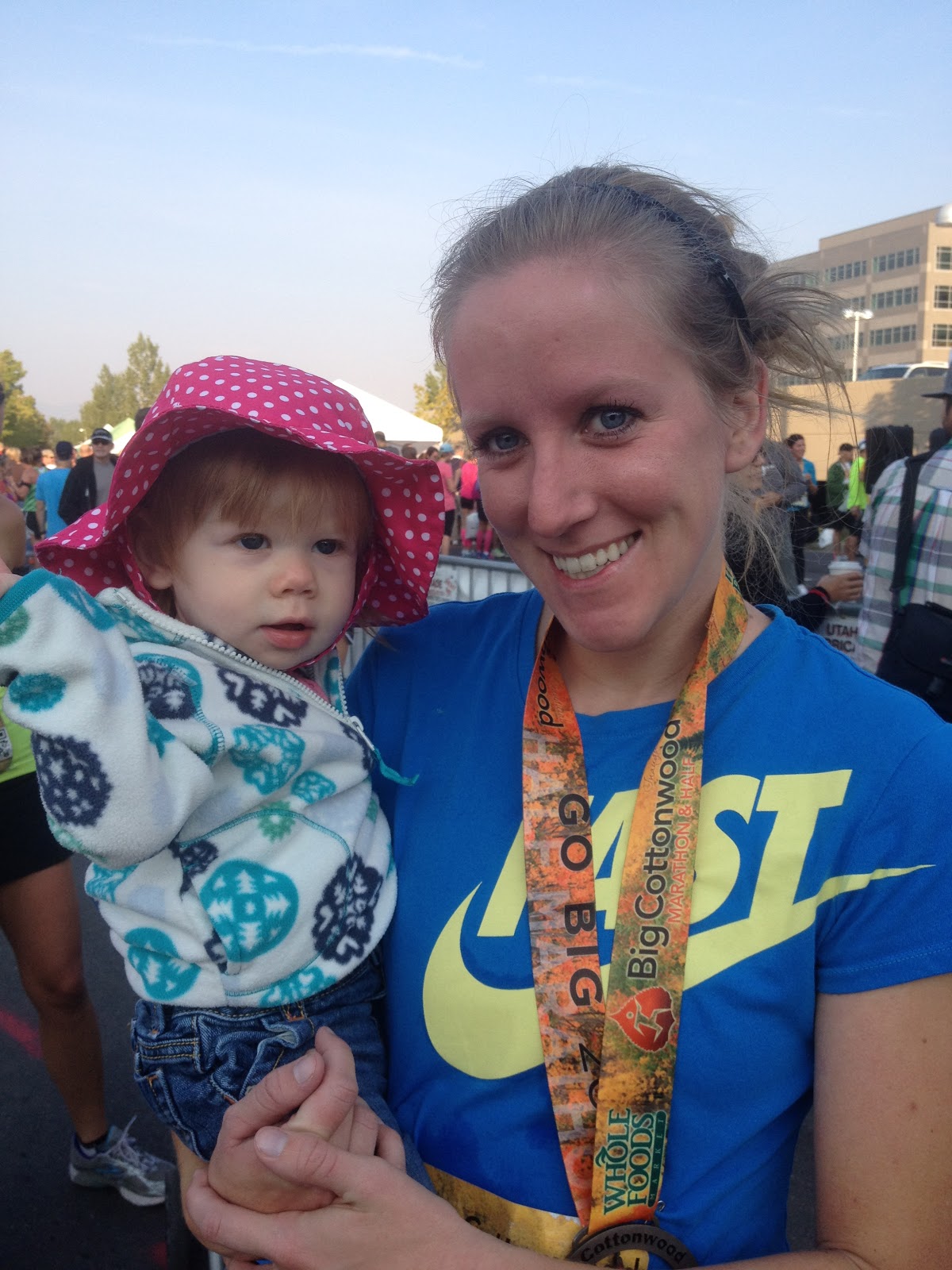 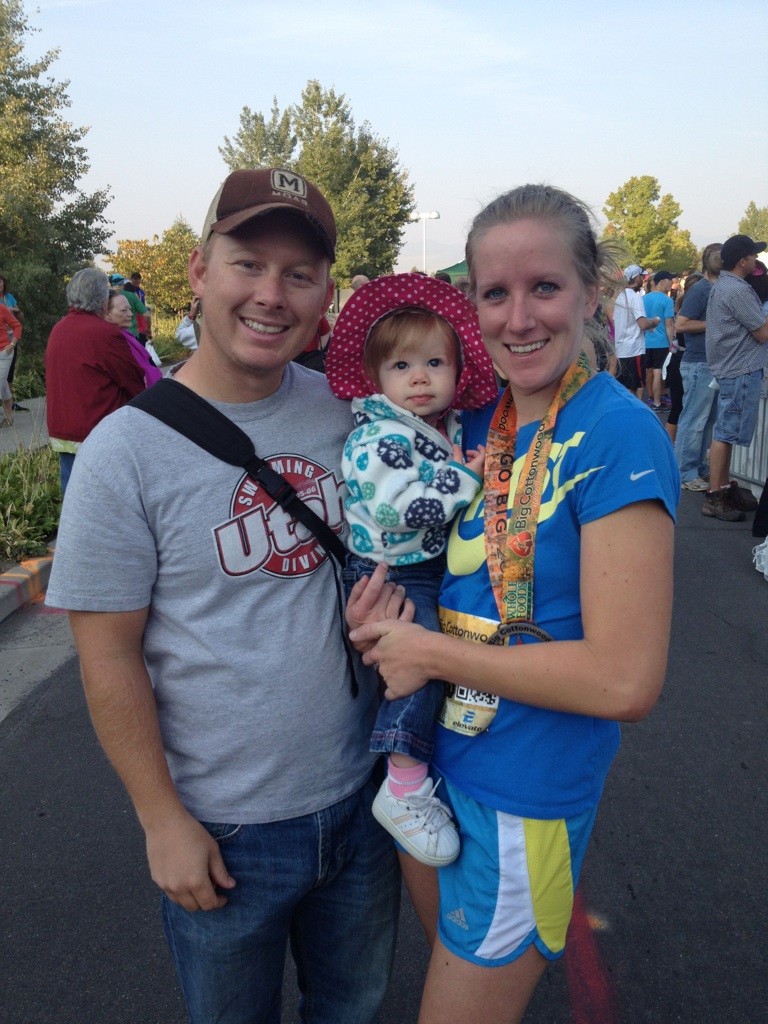 We get all our race pictures for free! This was the most incredibly organized and runner friendly race I've ever seen. They were AMAZING!! So when I get those pictures I'll post them if they don't suck :)
Posted by Megan and Cory at 9:23 AM

You are incredible. I wish I were a quarter of the person you are. Congrats! I knes you could do it!