The Joys of Cooking

The day before each pay day, I plan out two weeks worth of meals and write down everything I need and go buy it the next day.

I was extra excited for this grocery trip because I had pinned some amazing recipes that I was dying to try.

We went to the store bright and early and purchased everything (except the wine I need to make the Cheesecake Factory's Pasta Da Vinci, I'll literally have to go to the liquor store and I don't even know where one is...I'm slightly freaked out) and came home. I spent the whole morning cleaning my house, paying special attention to the kitchen and our master bathroom. The kitchen was so clean I was considering having the kids I babysit eat on the deck tomorrow just to keep it clean. I had cleaned counters, the stove, swept, mopped, etc.

So lunchtime came around and I decided to try a quinoa salad recipe that looked amazing. It was. Other than bawling my eyes out from cutting the onion, it was really easy and I had the kitchen back to normal immediately after. I sat down and enjoyed my lunch feeling domestic and proud.

For dinner I wanted to try making Zupa's mushroom bisque soup which is seriously phenomenal. You've gotta have some bread with soup, so why not try making the Olive Garden breadsticks recipe as well? I'm Wonder Woman, right?

At 3:45 I started the bread dough. I don't have a fancy mixer so I just used my handheld one. I never knew you shouldn't do that. I do now. After burning up the motor and getting dough in all kinds of electrical crevices, the dough was made, I made a note to buy a new mixer, and I started cleaning up again.

I cleaned up just in time to start the soup. It requires a lot of small diced things, things that like to find their way to the floor really fast. It also requires a boat-load of bowls and utensils. My sink was full of dishes before I was halfway through.

Then it was time to roll and cut the dough. Flour and sticky dough everywhere. EVERYWHERE PEOPLE! Also, I can't make a breadstick shape to save my life. It seemed easy enough when I made playdough worms as a child but real dough is quite different. I made two sheets of breadsticks. One had the reject or "retarded" looking breadsticks that no one would ever grab at any party no matter how good they smelled because it looks like a monkey pooped them out, and I had my sheet of slightly better ones that weren't so deformed after I had tried my hand at rolling them.

It wasn't until after the fourth or fifth stick that I noticed the warm butter was not being kind to the brush and there were tiny paint brush bristles all over the sticks I had done and in the butter. Small hair-like objects on anything, much less food, is not ideal. It's not even tolerable.

Meanwhile, the soup needed my attention. It had been "simmering" on step two of the recipe and needed to progress. The next step was to put 3/4 of the soup into a blender and blend until smooth and return to the pot. So I did just that. I put the hot soup in my blender, put the lid on, held it down like I normally do, and pushed the fun little "blend" button.

The soup did not stay in the blender. In fact, almost no soup stayed in the blender. The lid flew off and my entire kitchen became the splash zone for this mushroom bisque show. Believe me when I say my entire kitchen- My kitchen that was so clean I was going to make little children eat outside like a crotchety 90 year old woman. Walls, cupboards, furniture, floors, me... All covered in soup.

You can also take my word for it that I'll be repenting for the words I shouted when that happened.

I'd been cooking for over two hours at this point and the soup I was supposed to be eating was now all over my house, and I still didn't have any breadsticks to eat. I yelled an offensive form of "I can't cook!" and started crying. Not only did I still have to keep cooking but now I got to clean my whole kitchen again.

I cried for a minute and tried to gain composure. Somehow people do this every day and it's never this dramatic. I could get through it.

And I did. 2 hours and 45 minutes, one phone call to my mom for help, 800 times wiping the kitchen down, 3 sink full's of dishes, 2 stove cleans, and one time of just throwing things I didn't want to clean away, I had finally finished our dinner.

And dang it, it was good!

The soup is good but didn't thicken up and needs more salt next time. It also needs to be blended but I wasn't about to try that again.

The breadsticks look ridiculous but taste exactly like Olive Garden's. They're so good!!

Cory had better not complain that we're having soup for dinner when he gets home or else he may lose his head.

Funny how making lunch was so fun and successful and dinner was so not. At least I'm trying, and that's the important part. Also, as a bonus, the breadsticks look so weird no one will want them which means I get them all to myself.

There's still soup on my ceiling, and it may be there until the day we move out. 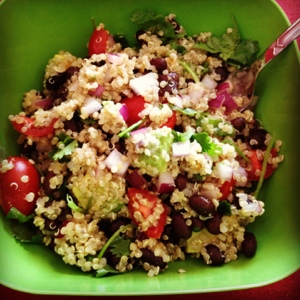 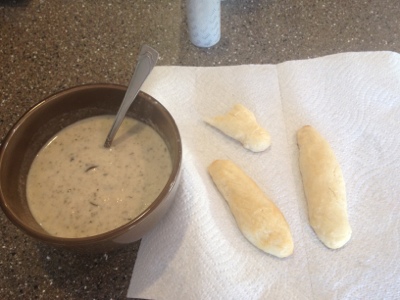 I'm glad you can laugh about it now. I guess that's why the chefs at olive garden and Zupas get paid the big bucks.