I am always amazed and also slightly humiliated when I break Kennedy's schedule or habits, much to my anxiety and worry, only to find out it really wasn't a big deal at all and that the schedule or habit that I've been obsessing over really wasn't that important. As a first time mother, I think this is common. It's hard to know what's right or wrong for your child because there are so many different parenting styles out there.

I've always been so adamant about Kennedy getting to bed on time or getting her naps in. She's always been a fabulous sleeper and I don't want to risk ruining that. But, as a consequence, I've missed out on a lot of fun opportunities and events because I was worried she wouldn't sleep or that she would be grumpy. As I've braved new adventures more and more, I've discovered it's really not that essential every day or night. Missing a nap once in a while (every Sunday for sure, thanks 1:00 church) or getting to bed late sometimes is perfectly ok.

Last night was one such lesson. We missed the Eagelwood fireworks primarily because we didn't think they were worth keeping Kennedy up that late. We also wanted to see if we could even see them from the new deck, so that was the selling point in not going. Had our families been around and gone, we may have tried it. But yesterday was the Bountiful Parade and Mueller Park fireworks. I thought Kennedy would LOVE the parade and I love the fireworks and I wanted to be brave and try it out. So we did. I told me myself not to stress about anything or freak out if she did because there was no way of knowing how this would turn out until we tried. I needed to man up and just go have fun no matter what. And boy am I glad we did!!!

As predicted, she loved the parade. She was so cranky in the car on our way there but as soon as we were around people she had a great time. The parade was really good, too. She'd clap to the music and wave at people and smile and point at floats. I even heard her say "wow!" to a few things. It was freaking adorable! I had so much fun with her!! We sat in front of the Wight House and when their float went by, a girl by us ran a small box out to one of the guys on the float and then he proceeded to get down on one knee and propose to his girlfriend in the middle of the parade, on the float, in front of everyone at the Wight House. It was so cute!! I even teared up because she was so excited and they looked so happy. She said yes and she couldn't stop kissing him haha. It was awesome.

My main purpose for going was to see the strippling warriors. And it was so worth it. For anyone that doesn't know, a stake put together a reenactment of the 2,000 strippling warriors from the Book of Mormon. 2,000 men, ages 12-24 marched in the parade holding sticks and flags, dressed as they may have been back then. I heard they were setting a Guinness world record for the biggest group of people dressed for combat but not going to battle, or something like that. IT WAS AMAZING!!! Even now just thinking about it makes me cry. They marched while pounding their sticks on the ground. Then they stopped and pounded their sticks in unison, held them up in the air, and then yelled "we will not doubt!" together. I don't think there were very many people who didn't feel touched in one way or another. I thought of the actual warriors who went into battle, the same age and countenances as these young men, and felt the spirit so strongly. Their army spanned the length of about two blocks, I'd say, and everyone stood for them and cheered as they went by. Many cried. They were led by a man dressed as Helaman. They had to each make their own sticks and many had fastened their own personal title of liberty to the top. What an amazing experience. How hard would it have been to be Helaman and lead those young men into battle not knowing if they would survive? And because they were so valiant, they did!! It was so incredible. Whoever put it together was very inspired and it was a huge statement of the Book of Mormon and its importance. I'm glad I didn't miss it.

After the parade we decided to try and head up to the fireworks and check it out. We got a killer spot right by the entrance so we didn't have to walk very far and we could leave pretty fast. Kennedy went hog wild out on the blanket and we found out she's a runner. Every second she got she would take off to someone else's blanket and try and get as far away as possible and laugh. She caused quite a scene around us actually. I think she was deliriously tired because she reminded me of a drunk person; funny to watch but you know they're going to crash hard at any moment. A little boy behind us thought she was so cute that he gave her one of his glow sticks. It was so sweet! I wanted to hug him.

At about the time we were losing patience with chasing her all around, the fireworks started. Kennedy has never been afraid of any noises. She chases the vacuum around, she doesn't mind loud movies, and I'll even jump in a room and scare her on purpose and she never gets upset. The fireworks were no exception. She sat down in my lap and and watched them and kept saying "whoa!" at the cool ones. After a little bit she got restless and kept moving around to get comfortable to fall asleep but she never succeeded. As soon as we put her in the car she was gone though. The fireworks were fun but a little slower than in years past. I still loved them though. Mueller Park is my favorite because you get to sit really close to where they light them off so it's extra loud and fun. We had a great time and Kennedy went right to bed when we got home and she hasn't been awful so far today. I hope that continues.

I really wanted to put these pictures in order but I don't have the patience to download them off my phone right now so just pretend they are :) oh and ps, earlier yesterday Kennedy face-planted into our little floor fan and cut her chin up :( it was so sad! She's ok now, I just thought I'd explain the mess on her face. 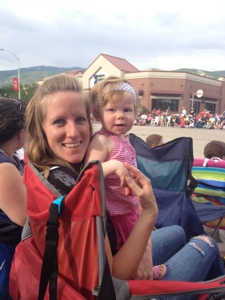 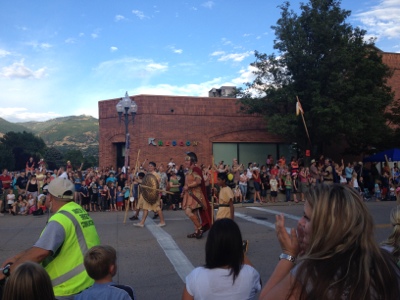 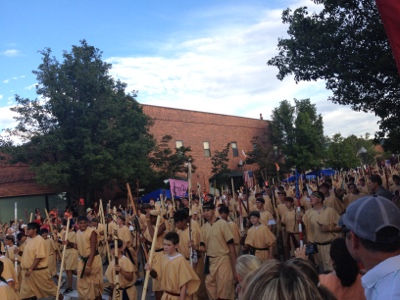 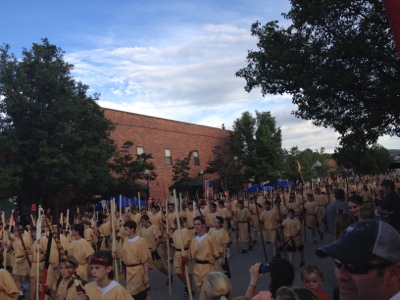 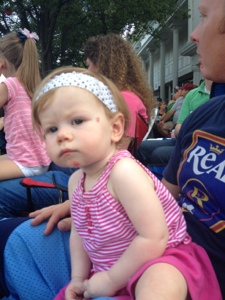 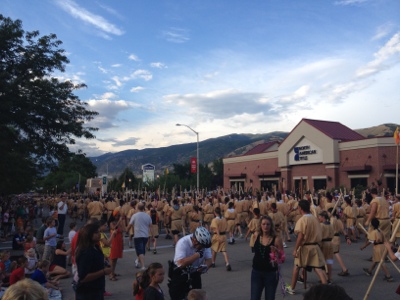 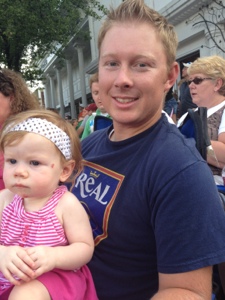 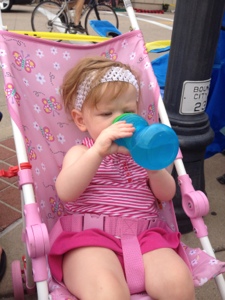 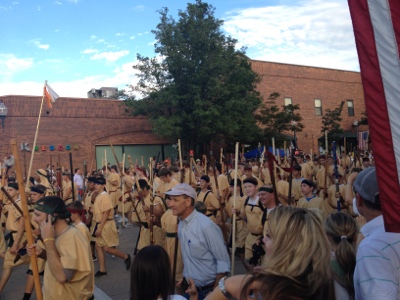