Thoughts On A One Year Old

I can't believe in just over two weeks I'm going to have a one year old. I know it sounds so cliche but really, it's insane. If time keeps going this fast I'm going to be 40 before I know it. I don't want to be 40.

In all seriousness I was thinking about how far we've come with her and how she'll be a toddler soon and no longer my little baby. Yes, I cried. That's another thing you don't understand until you're a parent. I thought people were being lame when they said they were sad to see their kids grow up. I get it now! I miss the little bundle of bones that would sleep all day and cuddle all day. I miss her laying on the floor and being perfectly entertained by the ceiling fan. But she has exploded with personality lately and she's becoming a lot more fun. Although I'm sad to leave behind the sweet little baby who slept during church, we're having so much fun watching her learn new things and interacting with us. However, for the first time since getting pregnant, I finally understand how people decide to have another one. That has baffled me. But I understand now that you miss the little baby and as the first one gets older, they get a little easier (in some aspects) and you're ready to take on another one. No, this is NOT an announcement that we're wanting another one. Not for a while. I'm just saying I finally understand it - not that I agree with it yet :)

A friend of mine once said when Kennedy was tiny that you wait and wait for them to do something grown up and cool and then they just explode with learning everything. It's so true. Last Saturday was a good example. Kennedy has tried taking a step before but while I was out running, Cory said she took two steps and stayed standing and tried to take more but he stopped her because he didn't want me to miss it. Since then she keeps trying and i've finally gotten to see it. As if that wasn't exciting enough, we stopped to get gas in the car and Cory went out to the pump and Kennedy looked out the window at him and said "daddy" and smiled. It was the first time she's actually called him that without repeating it over and over. This morning I got her up and put her on the changing table and she looked at me and said "Mom". Then, on Saturday again we turned on some rap music in the car and we were head-bobbing and Kennedy could see us in her mirror and started doing it with us and laughing. She was on beat and everything. We had so much fun on our drive to Layton. And yesterday she did it again the whole ride. She's finally becoming a person! Haha She teases us, chases us around, has preferences, tries to organize things, makes hilarious noises while having a conversation with herself, understands a lot of what we say... It's amazing. Yesterday we had the iPod playing and the Casper Slide came on and there's a part where he says "Freeze! Everybody clap your hands!" and people start clapping. She clapped right along with them. It was adorable.

It seems so weird that she's learning all these things because to us she's too small to be doing them. At almost a year the majority of her clothes are still 6-9 month sizes. Everyone said she'd grow out of them so fast but she really hasn't. I guess it's been kind of nice.

We love her so much and she is so much fun. I just adore her happy, fun-loving personality and I hope all our kids are like her. She brightens up anyone's day. Kennedy, you're the best! 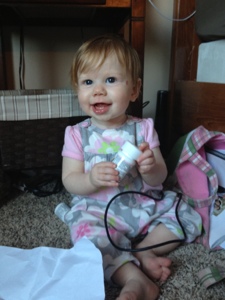 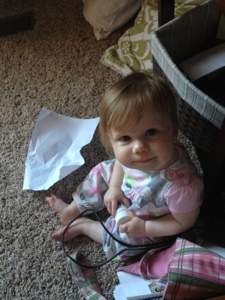 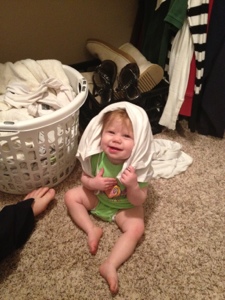 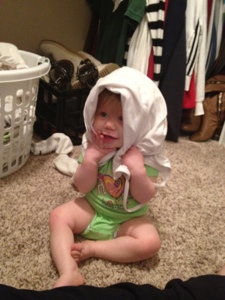