Saturday morning we went over to our friends camp and they made us an awesome breakfast of pancakes, sausage, eggs, and fruit. Thanks again, guys! Then we met back up with Cory's diving friends and he and Chris took our Jeep and went on Poison Spider Mesa while JoyLyn and I took the babies out to have our own fun!

It's a good thing we didn't end up going on Poison Spider because Cory said his friends took him on some new stuff that was pretty scary with his tippy Jeep. He even said he was done wheeling for the trip because it had freaked him out so bad. He needs to fix his Jeep before he does anything serious again. The boys had fun, but Cory kept talking about those new spots like he'd seen a ghost.

Meanwhile, JoyLyn and I decided to drive to Tusher Tunnel and check it out. It was so awesome! It's a long tunnel that looks like a cave but comes out the other side. 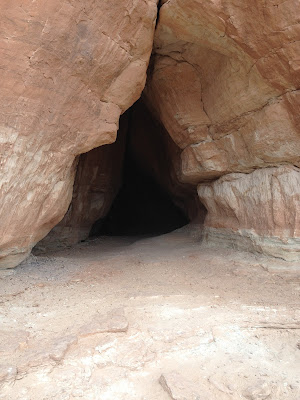 After that short trip we headed into Arches and drove around to the lookouts while the babies slept in the car. Arches is such a beautiful national park. I love it! My favorite arch is Sand Dune Arch. I've loved it ever since I was a kid. We took the babies there and let them play around in the sand for a bit. Kennedy was totally fascinated by it. She'd put her hand in it and feel it then rub it between her fingers. 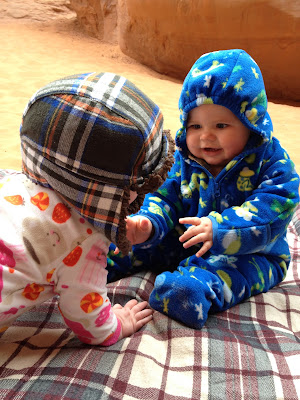 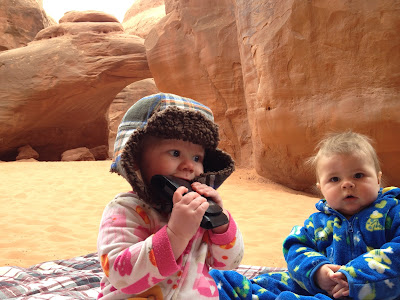 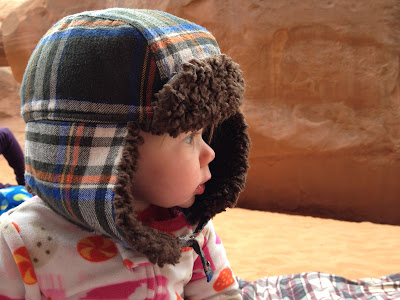 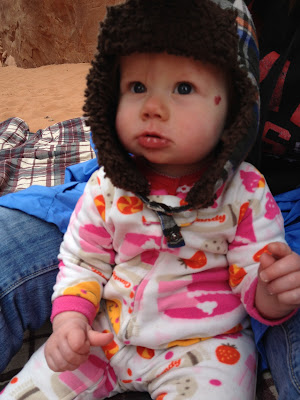 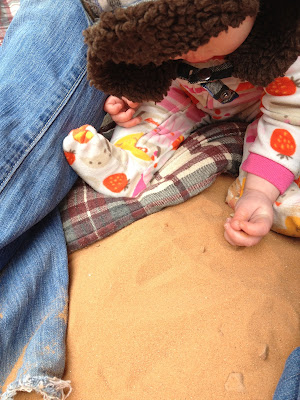 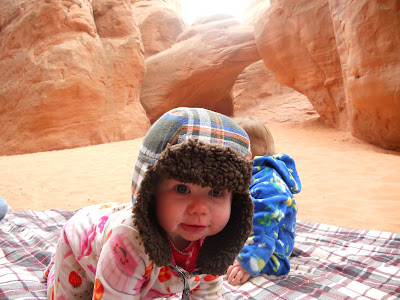 It was pretty cold and it didn't take long before both kids had rocks in their mouths that we had to fish out. We figured the boys should be getting done with the trail soon so we drove back to their cabin to wait for them. It was there that a sucky moment as a mother occurred. Kennedy was laying on their bed playing with a paper plate. I checked on her, went over to the window and looked out at Cory and Chris as they drove up for a second, and looked back just in time to see Kennedy go over the edge of the bed backwards. She landed on her forehead on the hardwood floor and started screaming the SADDEST scream and her head instantly went black and a goose egg appeared. It was awful and it took her a while to calm down. We tried to keep ice on her head but it was cold and it just pissed her off more. She has a pretty hefty bruise there now but I'm surprised it wasn't worse. She was a trooper though. Since then she's bonked the same spot a few times and she gets pretty upset but I don't want to discourage her from trying to move around the room. Accidents will happen, just hopefully nothing as bad as her tumble off the bed again. And yes, I know it will. Kids are kids.

Our plan was to make tin foil dinners that night but it was too cold and windy to sit around the campfire and wait for our dinner so we decided to go out, again. We came home with almost the same amount of food we left with because we kept deciding to just grab something fast haha. But I'm ok with that because it was good and was easier on me. We walked around Main Street for a little bit checking out different restaurants. I'll admit by this time I was SO cranky and tired. I was starving and didn't get a real lunch because Cory had the sandwich stuff in the Jeep. But we finally decided to eat at Moab Diner which is really, really good. I recommend it. We had a great dinner and had fun talking. And we were warm!

After dinner we went to show Chris and JoyLyn Sand Flats Road since they'd never been on it before. We showed them some trials and the campgrounds and took them on Baby Lions Back. They've never really done any major Jeeping before so we figured that was a perfect beginner test run to take them on. Short, easy, and fun. After that we headed back to the cabins and went to sleep. I think Cory was out before 9:00 came around.
Posted by Megan and Cory at 8:36 AM