Friday morning we met up with some of Cory's friends he knows from his diving team when he was in high school who also love off-roading and went to do Hell's Revenge. We've done this trail several times before and it's always been one of my favorites. However, this time was totally different for a few reasons...

We started off alright but we were extra careful because Kennedy was in the car and we didn't want to jostle her around too much. Every time we'd hit a big bump we'd both flip around and check on her. She was totally fine though. Cory's friends love to go really fast so we were cruising through the trail faster than normal. The thing about Hell's Revenge is, we always forget the scary parts each time we do it. It's like a mental block. We always remember the beginning and the steep slick rock climbs and descents like these: 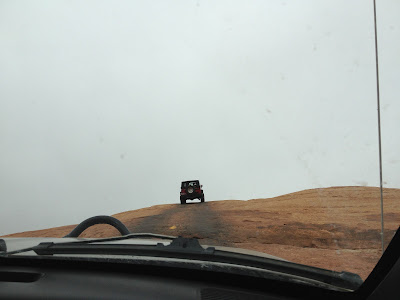 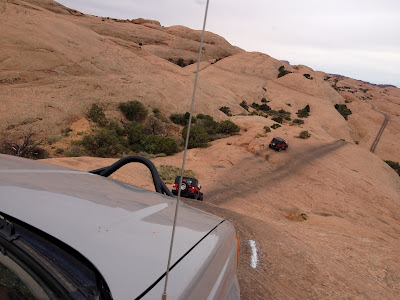 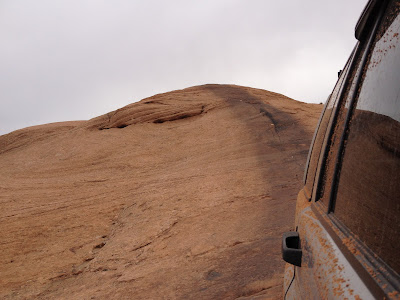 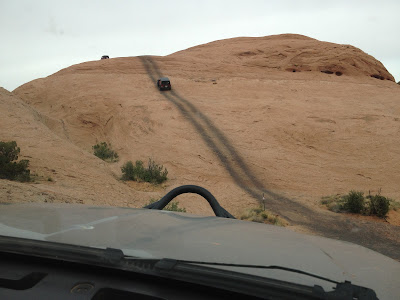 We remember the lookout point: 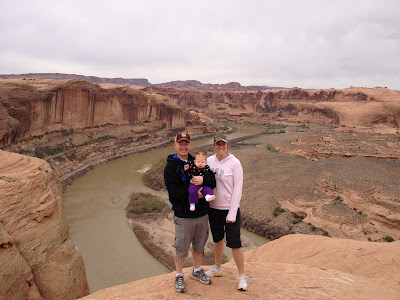 And the hot tubs: 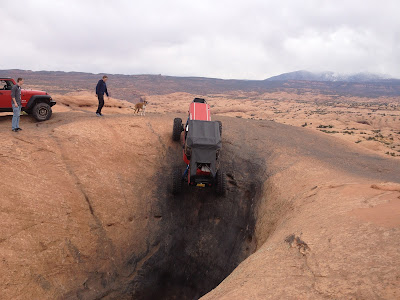 And we always remember the big obstacles and a really scary and dangerous part just after the hot tubs. I always remember this because I'm always the spotter and the drivers life is literally in my hands because the trail is coming down a skinny part of slick rock with cliffs on both sides and the driver can't see where he's going until he's already facing down. If his tires are in the wrong spot, he drives off the cliff. It's not that bad, it's just steep and it always makes me think of the first time we tried it and how scared I was guiding Tyler and Collin down it. Anyway, we always forget the really tippy spots and the hard rock descents at the end mixed with dirt road. However, I think this trip will forever have those spots burned into our minds.

For starters, Cory has lifted his Jeep several inches and gotten bigger tires since the last time we did it so his Jeep is much taller and less stable. His shocks are also shot in the front end so we don't have those keeping the Jeep from tipping side to side. The spots that are usually a little unnerving were totally terrifying for us. And it didn't help that we had Kennedy in the back seat. We both had a pit of anxiety in our stomachs the whole trail. I'm totally convinced we had someone up above watching out for us because it was BAD! Even his friends would turn around and watch us and cringe with fear watching us tip so much. We hated it. The non-tippy spots were totally fine. The majority of those kinds of spots though are on the edge of cliffs or steep slopes so if we did roll, it's not like we'd just tip over, we'd probably keep going a ways. Anyway, it also didn't help that we were going so fast. Cory likes to take his time and look for the safest possible route to take up and down stuff and he didn't really get a chance to do that. That being said, I can now tell you that we almost rolled, front over back, on the last part of the trial. We were going up a steep rocky incline that has gotten significantly worse since the last time we did the trail. Cory was doing his best but his back end slid us to the right, it dropped down too low, and the front end came off the ground and we started to slowly go over. Cory, thinking quickly, threw it in reverse and backed down which dropped our front end from going over and we backed down the obstacle. Needless to say, we both were trying to swallow our hearts back down to our stomachs. It was so scary!!!! Kennedy slept through the whole thing. He took a better approach the second time and we both literally let out a huge sigh of relief when we reached the end of the trail. He said as soon as we got back to camp he was lowering the jeep a couple inches. He also needs new shocks badly. I also know our close call never would have happened if we were going as slowly as we usually do with my family. I was happy to be going faster, don't get me wrong (we were done in 3 hours instead of 5 or 6), it was just a little harder to concentrate.

Scary stuff aside though, we did have fun on the trail. And for you jeeping folks, we also met Dan Mick! 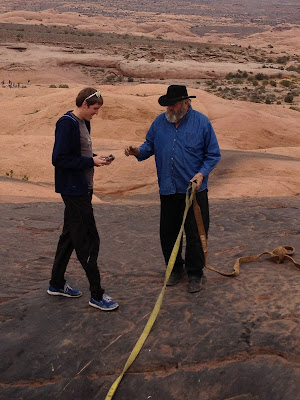 He's not a huge celebrity or anything but he did help write the guide book of trails we use all the time down there because he's personally done every one of them. He signed our book. He was also the first person to do Mickey's hot tub on Hells's Revenge and it's named after him. He pulled up right as Cory's friend was attempting it. He watched quietly for a minute and then finally spoke up that without lockers, there was no way his friend was getting out of there without flipping his Jeep. So, we helped pull him out. I think it would be fun to take one of his guided Jeep tours sometime. I bet he's seen all kinds of stuff!

After Hell's Revenge, and after Cory lowered the Jeep, we met up with our friends Chris and JoyLyn who had just gotten into town. It was mid-afternoon so we were trying to find something to do that was fun but short. We ended up going down Kane Creek Road to the Indian ladder that's just off the road a ways. We've stopped here several times in the past but I've never dared to climb all the way to the top before. It looks easy but once you start up, you realize it's challenging and you have to come back down it. Up is always easier than down. But I finally made it to the top and coming down wasn't as bad as I thought  it would be. If I would have had my climbing shoes, I'm sure it would have been a breeze! It was tons of fun though and it helped to slightly dampen the burning desire I had to go climbing the whole time we were there. 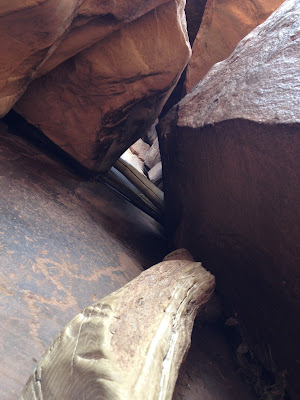 Here we are at the top. Can you see us?? 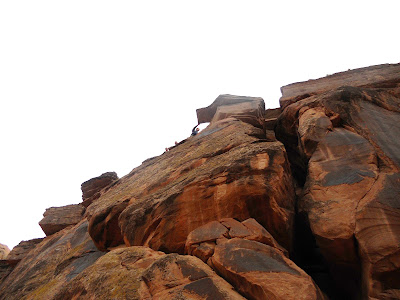 JoyLyn stayed down at the bottom with babies and got some cute pictures of them playing together. Thanks, JoyLyn! 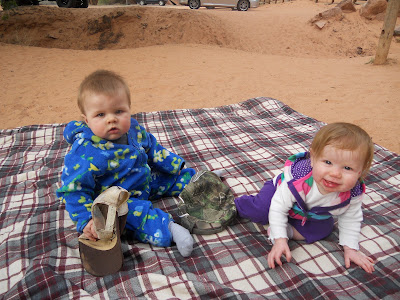 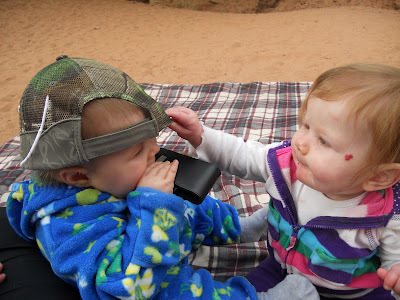 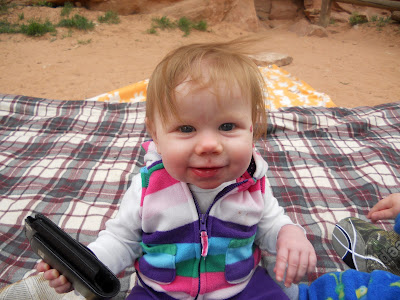 After the ladder, we decided to head into the little canyon the ladder is by and see where it goes. It's full of walk-in camp sites that are really awesome! We want to camp back in there sometime soon. And at the end there's a little pond big enough to swim in, which I'm sure dries up after the spring. 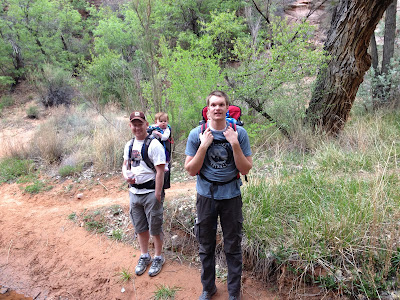 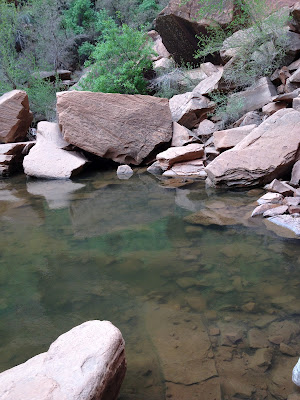 It was pretty late by then so we went to Burger King to pick up some dinner and headed back to the cabin.  After putting Kennedy down, I had a mini-meltdown. Camping with a baby is really hard. It almost takes the fun out of it at times. I was super tired from the night before and Kennedy had just spent the last 20 minutes crying and I was just done with it all and I felt like going camping with a baby wasn't ever going to happen again. I even told Cory I didn't want any more kids because I didn't want to do this stage again. She can't crawl around anywhere and she gets mad because I won't let her. She tries to eat everything and she's dirty. I have all the same chores and responsibilities I have at home, only now it's even harder because I have to rummage through bags to find diapers and wipes or find a good place to change her and feed her or worry about how to wash her bottles. Sleeping was hard and I was always worrying about her melting down in the car. It was stressful and not easy. But, I know it'll get better and I felt better the next day after some sleep. I'd much rather still go camping and put up with the hard stuff than not go at all. At least now I know what to expect.
Posted by Megan and Cory at 8:31 AM