Yes, we went to Moab, again! We can't get enough of that place, which is why we go there a couple times a year. As usual we planned a couple months ahead and got really excited. We thought April would still be too cold at night to camp in a tent with a baby so we booked a cabin to stay in. They didn't have one available for Wednesday night so we just stayed in a hotel. I can't wait to actually camp again!!

We started on the road Wednesday morning and drove into the strong southern wind. Now that Kennedy is older she hates being in the car too long so we borrowed my brothers car DVD player in hopes that putting on Baby Einstein would help keep her occupied when she'd finally had enough. It was a lifesaver!!! I decided to try putting in Finding Nemo on the way down. She went crazy over it!! It was funny because the beginning of the movie is pretty sad with Nemo's mom dying and such but she was giggling and squealing through the whole thing. She got bored after about 20 minutes though. 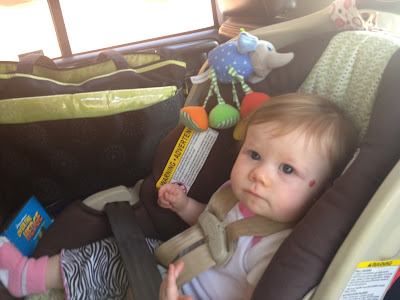 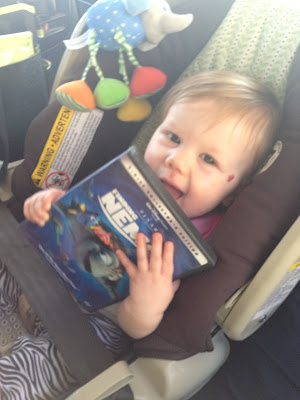 It was also really warm the day we left and it was the perfect time to discover the air conditioning in the Jeep doesn't really work. That was super fun.

We finally arrived in town and checked into our hotel. We've stayed there before and knew it wasn't the classiest place, but it was still decent and not very expensive. Either my standards have changed or we just got a bad room, but it wasn't as clean as I remember and we were right by the office so all the employees would come out and smoke right by our door. It sucked. We left as soon as we unpacked the Jeep to get away from the smell. We decided to go walk around town and look in the shops and find some dinner. It was really windy that day because the cold front was blowing in so excuse Kennedy's hair.
We found this cute hat for her. We decided not to buy it but then went back Saturday and got it anyway. 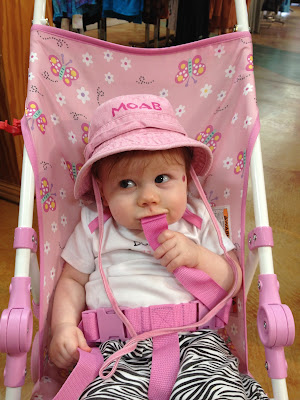 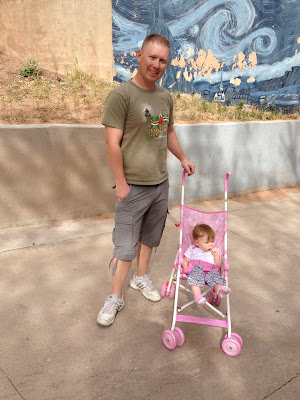 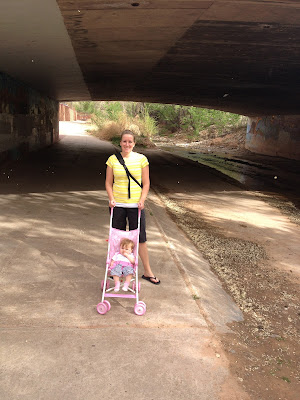 We stopped at Pizza Hut and had some dinner. At this point Kennedy was really tired from the day and sick of the wind in her face so we had to work hard to keep her from throwing a fit while we ate. Here's us playing with the phone. 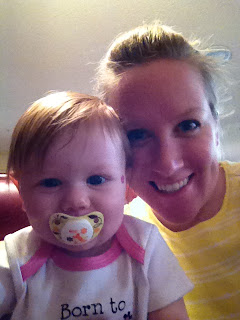 On the way back we watched the storm blow in and we were grateful we didn't have to go hide out in a tent, even if our room wasn't the best. 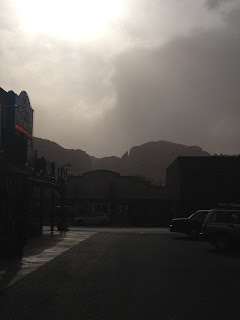 I was so worried about how Kennedy would sleep during this trip. I didn't want us both to be exhausted and grumpy the whole time. We got back to the hotel and set up her pack and play next to our bed. She was sitting on our bed with her binki in her mouth. As soon as it was set up, she crawled over to it, looked inside, took her binki out and threw it in, and tried to climb in herself as if she was putting herself to bed. It was so funny!!! We laid her in it and she kept standing up and talking to us and playing around. I decided to try laying down with her on our bed until she fell asleep and then I could transfer her to the pack and play. Instead, she rolled around and would grab our faces and laugh or she'd sit up and bounce up and down on the bed and squeal. Clearly this option was too exciting. I put her back in the pack and play and she cried for a minute and then zonked out. She slept really well all night. Hurray!!!
Posted by Megan and Cory at 8:23 AM

You're funny. When I read that you got a hotel, I was thinking, "Man, that's my kind of camping!" LOL