I've never liked to garden before because the only time I had was when my mom made me growing up. Today I decided the tackle the front yard and get it looking decent. First I mowed the lawn. We haven't bought a trimmer yet and the long edges and areas against the fence and house were driving me crazy, so I went out there with scissors and hand-trimmed our yard. I had people driving by laughing at me but I didn't really care. It wasn't too bad. Next, I pulled weeds out of the flower bed, dug out the overgrowth from the grass, realigned the rocks, pulled out the two dead bushes we had, trimmed the one remaining bush (with the scissors...I need gardening tools haha), raked out all the dead leaves and trash, leveled out the bark, and fixed the mess of rocks we had on the side of the house. I pulled each rock out, pulled out the weeds and whatnot, tilled the whole thing, then tried to place the rocks in an orderly fashion. I wish I had a "before" picture of the flower bed so you could see how awful it was, but oh well. I actually really enjoyed making it look better. I HATED the amount of bugs, spiders, and centipedes I encountered, but that's ok. I think later this week or maybe next week I'll go buy some bushes and maybe some flowers to plant where the empty spots are. 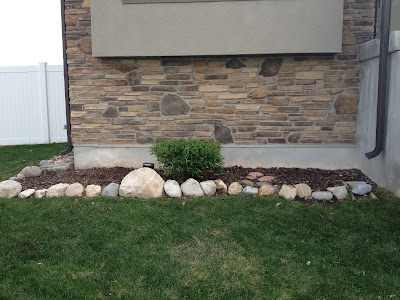 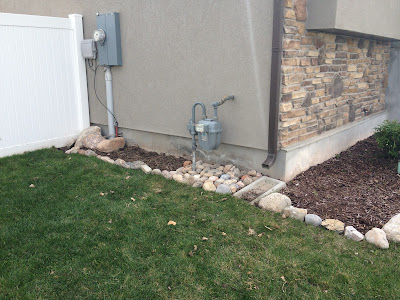