Apparently, Zumba has become quite popular. I wasn't sure what it was until one day someone told me it was Latin style dancing.

"Heck no!" my conscience cried.

I used to dance back in the day when my shirt sizes had a "T" in them. But I quit when I was 12. I've always regretted it. My collection of trophies would suggest that I was pretty good at it. I remember being very flexible and being able to wear makeup and super frilly costumes. I liked the shoes and it was my first experience getting nervous while waiting back stage.  I liked dancing.

Every time I watch So You Think You Can Dance I wish there was a private, adult, flexible, and PRIVATE dance class I could take. But that ship sailed long ago. Anyway, then I heard about Zumba a couple years back and thought about trying a class. The thought of trying to learn moves and shake my hips in front of a class full of people was more than I could face. I'm a TERRIBLE dancer. Seriously. I've seen babies on Youtube that can shake it better than I can and they can't even walk yet. It's quite sad. But last year my friend told me about the Zumba game for the Wii. I was 5 months pregnant, but I went and bought it anyway.

I wasn't too impressed. I blamed it on my torso being stretched beyond it's comfort zone and the fact that in addition to shaking my hips, I was shaking my baby as well. I didn't want her to hate Latin music because it was associated with 10.0 magnitude quakes.So, I put the game away and vowed to try it again another time.

Since then I've been invited several times to go try a Zumba class. "Everyone else is too busy worrying about learning the moves to notice if you suck or not," they'd all say. HA! That may be true to an extent, but everyone notices the girl who looks like she's having a seizure or the one who turns the wrong way and runs into the mirror. I don't want to be a post-class topic of conversation. Deep down, I want to try it, but I'm just not ready for that kind of embarrassment.

So yesterday I randomly remembered that I had the Zumba game. Timidly, I pulled it out of the Wii games and decided to give it another go. After closing all the blinds in my house as tightly as I could, I inserted the disc and began to play.

I started with the tutorials that teach you the moves, but the Wii remote is super sensitive so all I had to do was shake it and the game thought I had the move down and would move on to the more complex step before I even moved my feet. Within seconds it thought I had learned each move when I was still trying to get the remote into the belt. It didn't take long to realize the tutorials were a waste of time so I decided to just pick a song/routine and follow along the best I could.

I decided if I wanted to have fun and actually burn some calories, I needed to just let myself go and wiggle everything I could without falling over. I know I looked like a moron because Kennedy stopped playing with her toys to watch me and began to laugh. Yes, my 8 month old baby laughed at my dancing. It's a good thing her laugh is adorable because it made me want to be even more crazy to make her laugh harder. I may have looked like one of these: 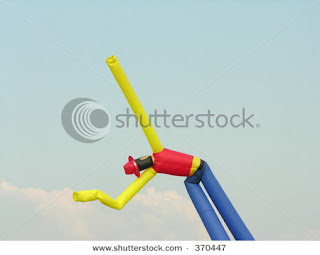 But I closed my eyes and pretended I looked like this: 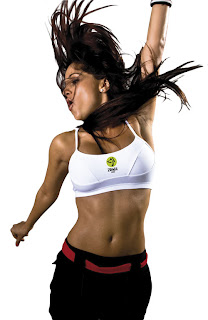 I had a good time. I enjoyed myself, I was sweaty afterwords, and I have plans to do it again - in the privacy of my own home. If I ever get caught flailing my body in public, it'll be in front of a car dealership for money. And I hope I never sink that low.
Posted by Megan and Cory at 7:06 PM

I LOVE zumba! It doesn't even feel like a workout to me, just a big party! Maybe you will go to a class once you get really comfortable with the DVD :)

Zumba is great! It's such a total body workout. I love the classes because you are forced to NOT stop! I always drip sweat after the classes. Don't worry, everyone looks dumb (except the instructors) while doing Zumba. ha ha
By the way, I've been checking out your blog and your little Kennedy is so cute! I really would like to meet her and see you guys. Where are you living now?