Kennedy is now 9 months old. The 9 months bringing Kennedy into this world and the 9 months she's been here are like night and day. I cannot believe how fast time has gone. Today I made an appointment for her one year check up in three months. What?!?!

She's healthy and doing well. She's not on the chubby side obviously. In fact she still wears 6 month sizes with room to spare. Here are her latest tricks and do-dads:
• She started crawling yesterday. She's not all over the place yet but she crawled to some toys that were a few feet away from her a couple times. I'm sure she'll figure it all out soon. Then my life will be hell :)
• She's pulling herself up to furniture and walks around holding on to it. She gets really pissed when she can't get up to something. She's also standing in her crib now so we had to lower it.
• She gets into everything. And I mean EVERYTHING! Just this morning I had her in our room while I showered and gave her a basket of toys to play with. When I got out, my entire nightstand was torn apart and all the stuff in the basket under it was scattered everywhere. Her toys laid in the basket, untouched.
• She claps in context and whenever she see's people on tv clapping. She also claps for herself when she does something well. It's so cute!
• Imitates us very well. If we put our arms in the air and say "so big" she puts her arms up too. She stomps her foot when we do, waves when we do, etc...
• She doesn't try to stand up alone yet but she does straighten her legs when her hands are on the floor as if she's going to. It's hard to explain but there's a picture below.
• She plays catch with me. I'll roll a ball to her and she picks it up and throws it back. It's a little wire-type ball so she can grab on to it easily. I thought it was a fluke the first time we played but she's done it every time since.

She's learning new things every day it seems and loves to play and tease us. I found a Cheerio in her diaper once and I know she didn't put it in there on purpose but she had a mischievous look on her face when I was starting to change her and when I found it and gasped she started giggling like crazy as if she played a trick on me. She's got such a fun personality. She's going to give me a run for my money when she starts really crawling and walking.

As usual, here are some photos of the wee one. 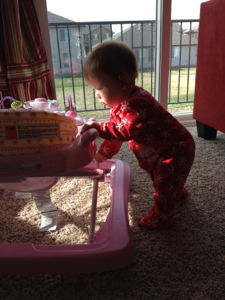 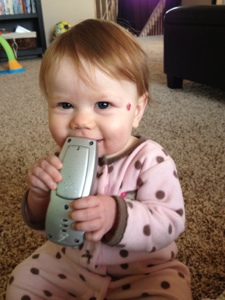 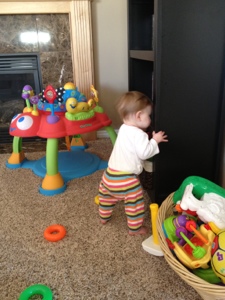 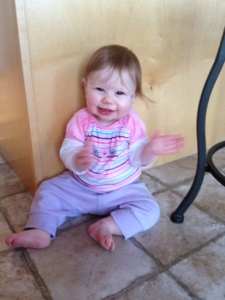 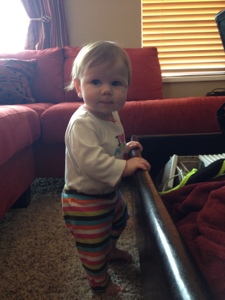 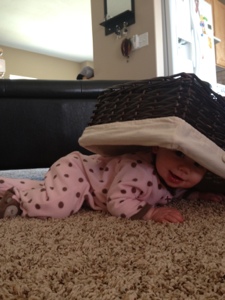 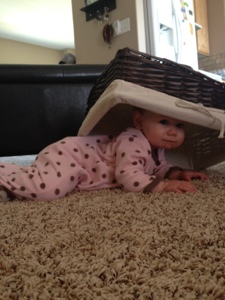 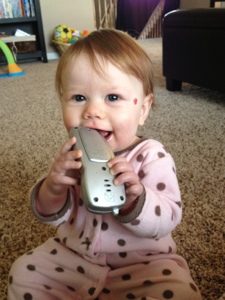 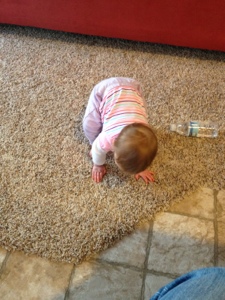 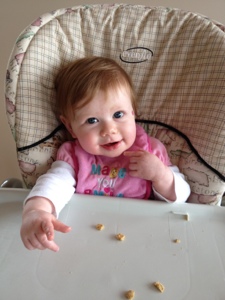