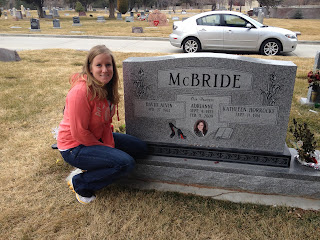 Yesterday was the 3 year anniversary since Adrianne was killed. I don't typically like to remember that day. It was horrible. But I always feel guilty if I don't do something to remember her.

For any new followers to my blog, my wonderful friend and roommate was killed instantly in a car accident in Orem. She was 23.

Anyway, I wanted to take some time and remember her. I went to Chili's for lunch since that was a favorite restaurant of hers. Then Cory and I headed out to visit her grave.

I had some time to reflect on her on the drive over. Friends like her don't come around very often. I've never met a more caring person for the well being of others. Sometimes she had a funny way of showing it, but I know deep down she wanted nothing more than her family and friends to be happy. It seems as life goes on, more and more people get caught up in their own problems and life events and care less and less about those around them. Adrianne wasn't like that. Even though she had her own trials to deal with, she took time out from them to care about others. I'm very lucky to have had a friend like her.

I've always felt a little guilty that we became roommates and friends during a strange time in my life. I wish I could have dedicated more time to her. We talked often, I just wish we could have done more stuff together. Obviously when we were roommates we saw each other all the time, but then I moved out of Logan and hanging out became harder.

I miss her frequently and I thank my Heavenly Father that He laid out a plan for us all to be together again.

It's always hard to lose a friend so young.

I know a lot of girls who went to USU, and I'm always surprised at how many of them know each other. My friend Kristie knew Adrianne as well.

I'm glad you were able to take some time to remember her.