8 Months and Happenings Around Our House

8 months ago at this time I was asleep. I didn't know that in two short hours I'd be meeting my little girl. Well, I knew she was coming. I was in labor. But I didn't know how fast she would get here.

She's the most special little squirt. Here are some of her recent habits and such:

* Gives kisses. They're extremely slobbery and a little gross, but at the same time so cute. She grabs our faces with both hands and kisses us. It's my favorite. She's done it to others as well.

* Clapping - but not in context. She never does it when I do it with her but it's always when she's playing with toys or sitting in her car seat that she'll randomly start clapping.

* Holds her own bottle. We still hold her though. We want that part to last as long as possible.

*She's not crawling yet but it's coming very soon. She is mobile, however. She rolls and scoots all around. She can get into crawling position from sitting but from there she just rocks back and forth. Give it time and she'll be tearing my house apart.

*Says "mom" and "dada". It's still babble but soon enough she'll associate it with us.

*She LOVES to stand up. Anywhere and everywhere she tries to stand.

*When holding our hands, she walks on her own.

She also currently loves: Baby Einstein, The Gilmore Girls theme song, my parents cat (she shakes and screams when she sees it), other kids and babies, and being tickled.

I was sure she was teething by the middle of last week  and given the gargantuan amounts of drool coming from her mouth I'm pretty sure she is, but it may not be as miserable as I'd thought. She had a fever, diarrhea, rashes, irritability, and a runny nose. But the runny nose got worse and worse and we've been sucking an amazing amount of snot from her nose. And it's green. So her crankiness may have been due to a cold. She seems to be getting happier and little better every day. Thank heavens! It's so hard to tell what's wrong when they can't tell you. I won't miss that about this stage.

As per tradition for her monthly updates, here are some adorable pictures. I'll have more updates down below.
Trying to get the blinds. 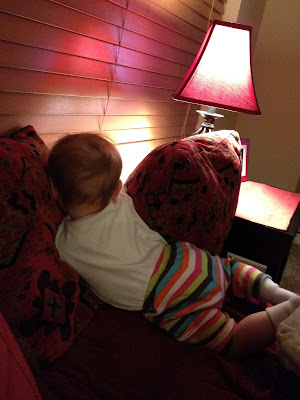 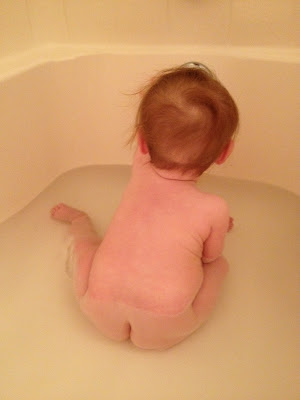 We make stink faces at each other. She thinks it's a riot. 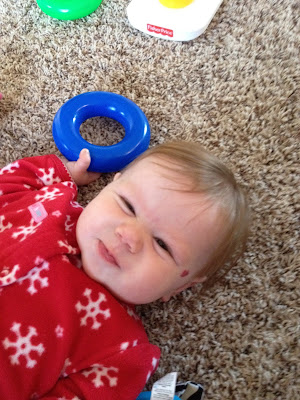 She's started sleeping on her side more. I think it's so cute! 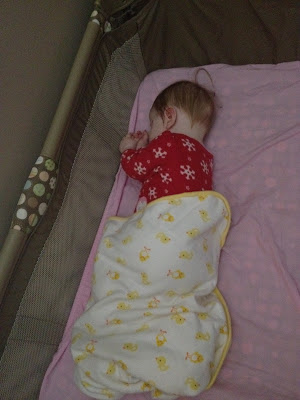 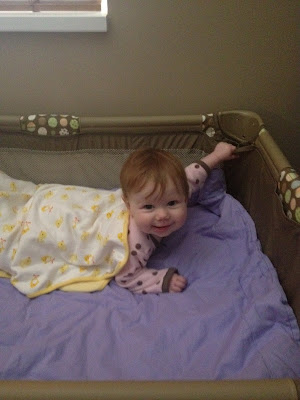 She absolutely loves the bath. We need to take her swimming. 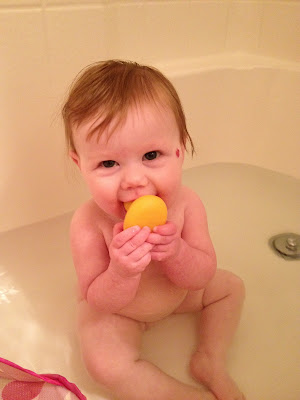 We bought her an Elmo and obviously she loves it. 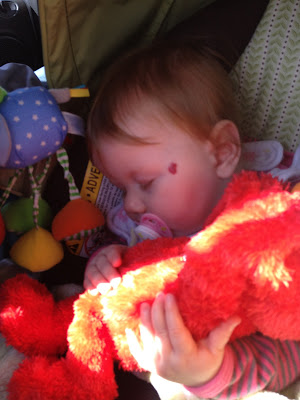 Testing out the new bike trailer. 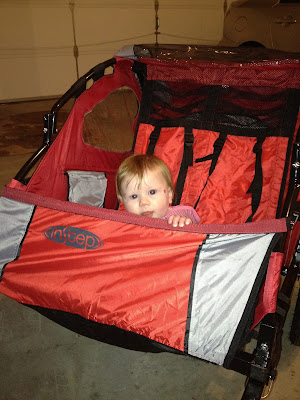 Poor thing was so tired she fell asleep while eating. 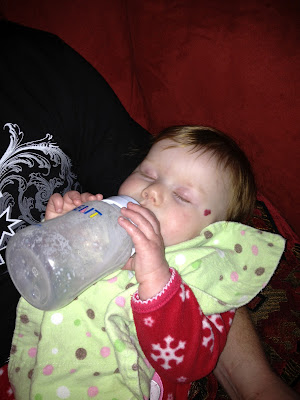 She was supposed to be sleeping in sacrament meeting. We both thought she was and we lifted the blanket over her car seat to look and saw this face. 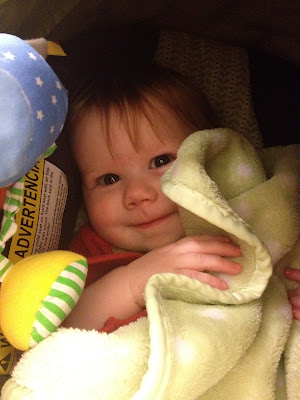 And she kept playing peek-a-boo. She had us laughing inappropriately hard. 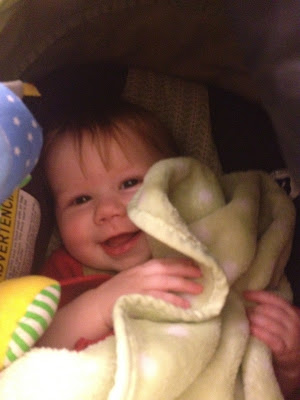 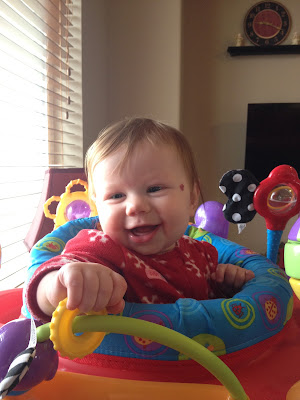 We're doing really well. We're heading to Moab (again) in April so of course that's all Cory has talked about the last month and that's all I'll hear about until we go. It also means Jeep work. Boo!! Hopefully it will be fun. We'll probably stay in a hotel because we're not quite ready to make Kennedy camp in the cold yet. With the weather being somewhat warm, I'm getting really excited to go! It's been a mild winter but I'm still ready for warmer weather.

We bought ourselves mountain bikes over the weekend and a little bike trailer for Kennedy. I haven't owned a bike in probably 17 years so I'm VERY excited. All I want to do is ride it! It's sitting in the garage, taunting me. Cory has plans for us to do hard mountain biking trails right away. That's not happening...

Cory finished his Craftsman level C courses a couple weeks ago and only has 6 (I think?) more tests to do for the B level. But then he has to a bunch of training courses which are only offered on certain days so that might take longer. I'm proud of him for plucking away. I can't wait until he doesn't have to work so much.

Other than that, life is good. We're making more friends here and loving it more and more. We love our neighbors so much! Life is good!
Posted by Megan and Cory at 2:15 PM