New Years Eve was devoted to the annual Hagloch get-together.

We started the morning off with a session in the Bountiful Temple. It started off a little stressful because I completely misunderstood where to meet everyone and it caused some slight problems which I feel terrible about. However, everything worked out fine and we were able to enjoy the session with our family. I couldn't think of a more perfect way to end the year than in the House of the Lord. I also had a pretty cool personal experience that I've been needing some guidance on for a while. It was awesome.

After the temple we headed to the Rec Center for ice skating. My phone must have been searching for service while in the temple or something because it had almost no battery power left and then it died so I was only able to get two pictures which I was VERY mad about. But at least they're cute pictures.
Here's Kennedy with her Grandma and Great Grandpa 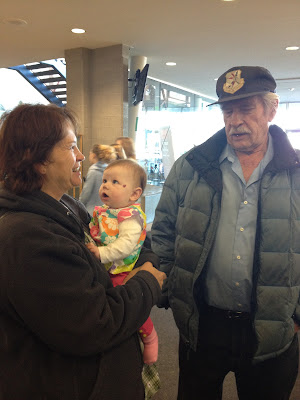 And Kennedy with Grandpa Hunter 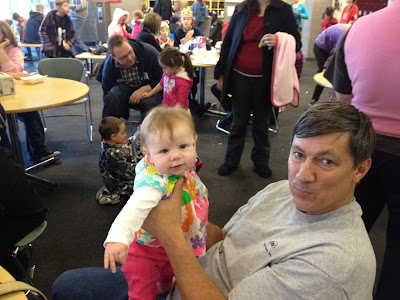 Cory had tons of fun skating and I had a great time talking with the girls and getting to know some of the cousins a little better. (Hi, Jessica! :))

After skating we went over to Cory's aunts house for soup and rolls. Everyone brought really delicious soups and as usual, we had fun gathered around with family and talking. There's just an awesome sense of love with the Hagloch side. I love it!!

After we ate, Lee needed help cutting down one the huge Box Elder trees in his front yard so Cory, Kennedy, and I went over so Cory could help. I had a great time watching the men try and tackle the tree but Kennedy got really bored and eventually I had to leave and take her home so she'd stop crying. I was bummed, I wanted to see the tree come down! Anyway, they got it down and Cory came home. At about 8:30 we were both fighting to keep our eyes open and finally decided to crash at 10:30. We didn't really care about ringing in the new year. We like our sleep. And we must have been really tired because Cory and I, as well as Kennedy, all slept through the fireworks and crazy commotion that happened at midnight. It was a really good New Years Eve day. I look forward to it every year.

On a sad note, Jason, Hailey, and Braden moved to Portland on Sunday. Cory and I are heartbroken we didn't get to say goodbye to them. We had to teach our Sunday School lesson and they were gone by the time we were done. We're going to miss them!
Posted by Megan and Cory at 1:25 PM