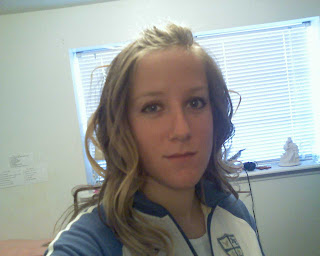 I was browsing my email account last night in bed and discovered that Yahoo! has saved every single photo I've ever emailed to myself over the last 5 years. I have photos back from 2006 to present. It was fun looking at them all. Cory and I got a good laugh out of a few of them and some were just down right embarrassing. We came across the above photo and Cory said it was, and I quote, "Ooooo! Hot!" I agreed it was a pretty picture, however as the saying goes, a picture is worth a thousand words. To me, this picture tells a story other than it just looking nice.

This picture was taken in February of 2007. It was probably one of the very few times I took an effort to get ready. I was roommates with Adrianne in an awful apartment in Logan. It was absolutely freezing!

The bags under my eyes are evidence that I didn't sleep much. I don't look happy because I wasn't. This was not a happy time for me in my life.

The cards taped to the wall in the back were my new years resolutions. I made plans to better myself and be happy again; I can't recall if they worked or not.

The statue of Christ with the children in the background was made by my mom. It was a Christmas present we all received two months prior. I kept it there to remind me to attend church and have faith that everything would work out somehow. I'll admit, there were times when I didn't believe it would.

The blinds are closed because peeping toms were in the area and my room was ground level. I always steered clear of the window.

Oh, and I still have that jacket. It most likely doesn't fit.

So to sum up, I look pretty in this picture. But I also look miserable. I was miserable. Things were tough.

Fast forward 5 years and things are drastically different. For starters, I no longer spend time taking ridiculous photos of myself for the world to see. But my life is so much better than I ever could have hoped for.

Those 5 years were quite a journey. It was around this time that Adrianne and I finally got to move out to a different apartment that wasn't -10 degrees all the time and she really showed her friendship to me.

Two months later I was finally convinced by my mom and my health to move back home and start over. I also quit my pop addiction. Yay!

Three months after this picture I met Cory for the first time. In one weekend he helped turn my life around and gave me hope that not every man out there was a total creep. He made me smile and laugh and most importantly, he treated me well.

8 months after that we were engaged.

5 months later we were married. That was the most amazing day! I can't believe I get to be with him forever. I've never felt so blissfully happy before. Nothing else mattered as long as I got to be with Cory.

Two years after this picture, almost to the day, Adrianne was killed. I miss her so much. It wasn't luck that we were roommates and that she became such a great friend. She blessed my life so much. Now she's in heaven working hard and free from any agony the world offers.

Two years and 8 months later we found out we were going to be parents.

And now today we have our beautiful little girl.

5 years ago I never dreamed I'd be where I am today. It seems like a whole other lifetime. I was a different person than I am today. Back then I was broken. Today things are better than I ever imagined. I've never been so happy. And one thing that has hit me this weekend is the fact that I don't need to prove that to anyone. It shows in my countenance (usually), it shows in my smile and how I feel each day. I don't need to convince the world that I'm happier today than I was 5 years ago. It's obvious. I have calming reassurances every day that my life, our life as a family, is going exactly where we want it to go. Sure there will be surprises and bumps along the way. But we have direction. We have a purpose. We have each other. Forever. And we have the happiness we feel each day. So, 2007 version of Megan, things do get better and it's more wonderful than you can comprehend.

The bad news is, your hair probably won't ever look that good again. Sorry.

This post brought tears to my eyes. I'm so happy everything turned out so good for you. You are one incredible lady and I am very grateful to be part of your life!

So glad you are where you are today too. :) xoxo