We embarked on our very first camping trip with Kennedy this weekend to Lava Hot Springs. Let me just start off by saying I was really, really nervous about how she'd do. But all my worrying was pointless.

We left home Friday morning and made it all the way there without incident from the little bean in the back seat. It was nice and cool when we arrived. But that just means she quickly got to put on the adorable new hoodie was bought her! 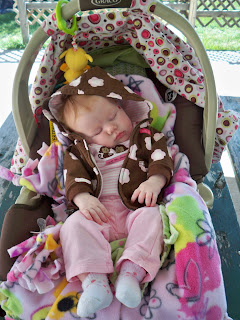 The campsite was very... unique. There was a small petting zoo right next to us with crazy goats and a pony. Our neighbors were a bunch of guys from Saudi Arabia and they spent their time sitting in a circle playing drums, signing, and passing a hookah pipe around. It was pretty funny! Our group site was nice because it was very open, had a covered patio area for eating with tables, and had running water and power. We pitched our tent and sat around for a little while until it was warm enough to go run the river. We rented a 2-man tube and a 4-man tube and got to run the river 3 times before we needed to return them. It was FREEZING but so much fun!! Hillary made me laugh so hard when we went on the 2-man. Our last run we stopped and played in one of the hot springs that empties into the river. It was so warm!! But then we had to get back into the freezing river which was hard. It took me an hour and a half to warm back up after. But it was awesome! We went back to camp and had a fantastic dutch-oven chicken and potato dinner and sat around the campfire. That night was really, really cold. We wrapped Kennedy up with 2 fleece blankets and a hat 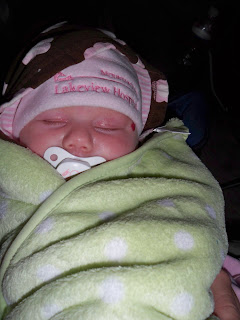 Her face was cold but the rest of her stayed warm. Even though it was freezing she slept really well and made it till 4 a.m. before waking up for the first time. We were proud!

The next day everyone else arrived and we got to visit with family. Cory's family is amazing. I don't think he realizes how lucky he is to have so many wonderful cousins and to be so close with them all. There's hardly any animosity. And it's fun talking mom-talk with his cousins that are married and such. I love them all. Anyway, after talking we decided to head to the pool! I was so excited!! We swam around and went down the water slide and I watched as Cory dove off the top platform while people freaked out. Oh yeah, that's my husband! After 2 hours I started to get totally wiped out and Cory took me back to camp. Everyone else stayed swimming or went and ran the river again. Kennedy started to get really fussy at very unusual times. I finally realized the last day that she was probably overstimulated. There was a lot going on and she was being held pretty much constantly - which doesn't happen at home. But she was still a good baby. Cory went and bought a space heater that we plugged in and used in our tent. It's dangerous, but it was so warm and it helped Kennedy sleep. We were very grateful we had it.

Sunday we spent the whole day sitting around and talking. We played Mafia around the campfire that night but it was really cold so Cory, Kennedy and I went to bed early. We woke up this morning and packed and left before Kennedy could throw a fit. We had to stop in Brigham City because we wanted to see the new temple which is gorgeous, and Kennedy was screaming so we had to try and calm her down. Eventually we had to move stuff all around to make room for me in the back seat to sit with her. She calmed right down once I was there with her. That's a good feeling :)

Overall, it was a really good trip. I had a hard time with how fussy she was being during the day. It wasn't awful but she wasn't the happy, content little baby she usually is. However, she slept so awesome at night and stayed perfectly on schedule! It was nice to get away and spend some time together and see the family. The last time we all got together was when Grandma Joyce died so it was good to see everyone on happier terms. Even though I love camping, it's so nice to be home and clean and have all the comforts back that I take for granted. We had fun! 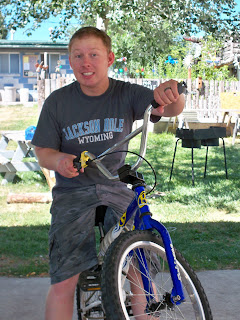 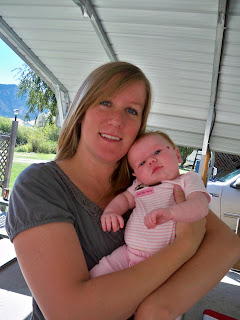 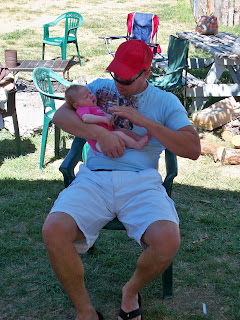