I love the show "The Big Bang Theory". Not only because it's hilarious, but it takes me back to my happy apartment days in Logan at Cambridge Court. Although the apartments were tiny and overpriced, it was by far the best place to live. The apartments all faced each other and there was a sense of family there. Everyone knew everyone else and there was an unspoken open-door policy with our closest friends, a lot like Penny and Sheldon and Leonard. We had video game nights, dinners together, slept at each others apartments when we were too lazy to walk down a set of stairs to our own apartments... It was the life. Allow me to show you what it was like:
The east entrance - I got a parking ticket here once. 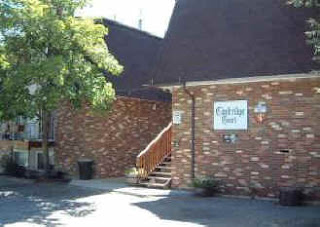 Our community, indoor pool that was the center of the complex. We had countless awesome times in here. When it was really cold, we'd open the doors on both ends and the building would fill with fog so thick you could barely see in front of you. It made for some fun wars. 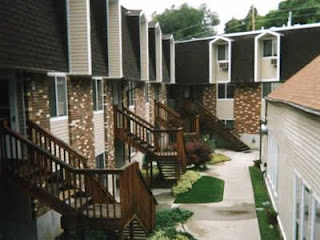 The above picture was actually the apartment I lived in my 3rd year there. It's the one on the left, closest to the camera. The below picture is how freaking tiny the kitchens were. And yet, on Sundays we'd invite lots of people over and cram everyone in this tiny space and eat together. Aw... 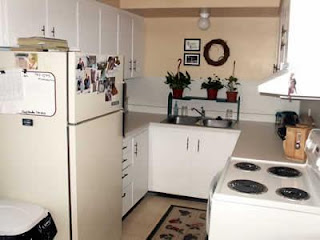 I'm absolutely crazy about the life I have right now, but it's fun to look back on the great times I had growing up and the wonderful friends I made during this time. It was in these apartments that the following transpired:
There was also a lot of drama and crap that went on but I choose to remember the good parts. Sometimes I wish I could go back and relive those days. I'm so glad I had that time to move out and be on my own and experience the college life. It was a blast!!
Posted by Megan and Cory at 9:08 PM

Not to ruin your fun or anything, but I don't have any memories of your kitchen being that clean. Ever. Any year. Where did you get that picture?

Megan, reading that post made me feel so much better. I was going though a stack of no-named CD's last night and the majority of them where from college. On one of them was a movie that we made one night for FHE. All I can say is, "man I did some dumb stuff in college". haha! However even though I did alot of dumb things, I wouldn't change it for the world! I love those college years and had the time of my life!

Hahaha!!! The slipping down the stairs in a Hawaiian outfit! It was sad but I couldn't stop laughing!! And thank you for reminding me about the gallon challenge! I did throw up on that cat but I still drank more milk than that other guy! ;) love it!

One of my favorite Cambridge memories was trying to "ring" people with a hula-hoop as they walked by the pool.

Don't forget hours of "The Newlyweds"!