Our beautiful baby girl was born on Monday, June 27th, 2011. She was born at 3:39 p.m. surprising everyone by weighing 7 lbs 11 oz and measuring at 20.5 inches long. We didn't think she'd be very big since I wasn't very big. She must have really been squishing my organs :) She's completely perfect. She has a lot of long hair, her daddy's round face and so far his nose (yes!). The mouth is still up for interpretation and we'll have to wait a while to see what her hair and eyes do as far as color. If she gets those from me we will have made our ideal combination of features haha. No matter how she turns out, she's gorgeous and we're so excited. She's been a sweet baby so far and we love her so stinking much. I'll put pictures first then tell the whole blooming birth story (to an extent) for those that want to read it after the pictures.
Right before getting ready to push. 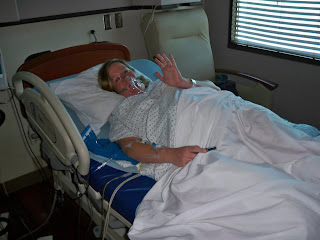 Excited Daddy, but I can see the fear in his eyes 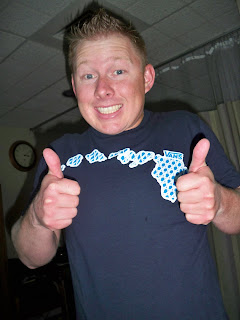 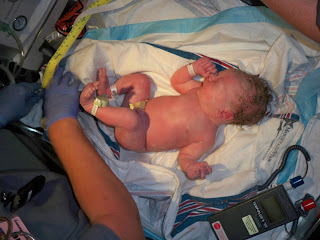 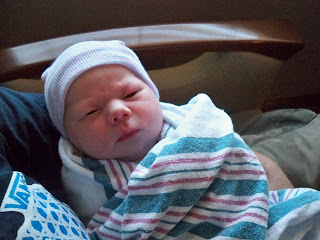 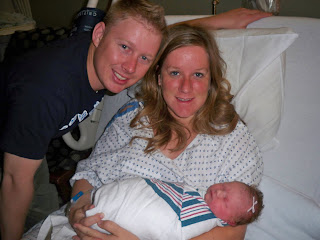 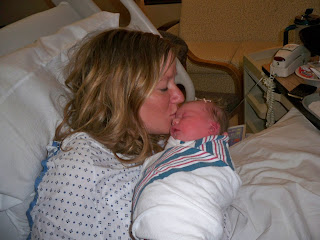 Alexis and Hailey finally have a cousin! 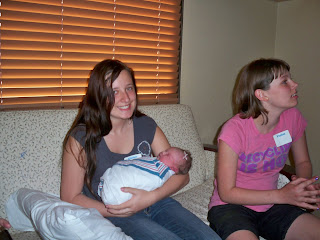 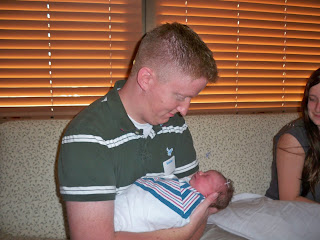 Bradlee and Brock were so excited to see their new cousin! They were adorable! 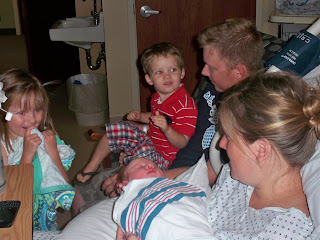 Tyler is an uncle! 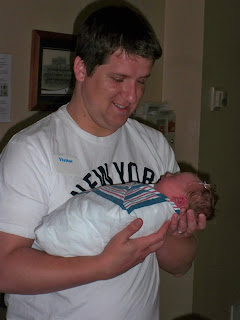 Checking out her ears 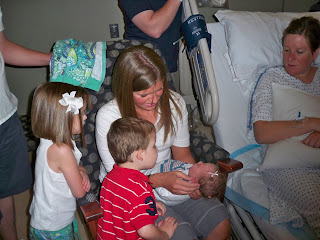 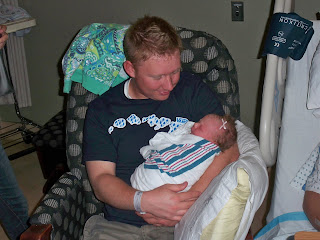 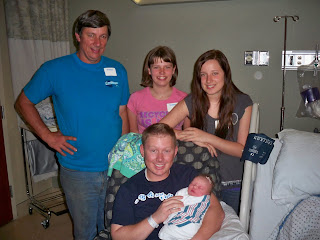 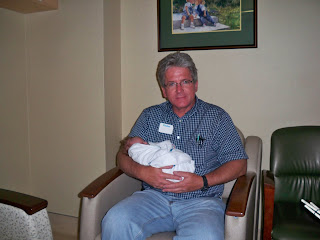 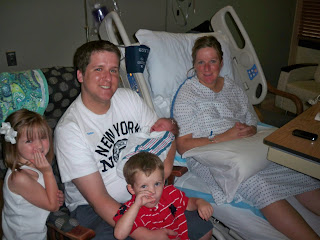 Her stink face. So cute! 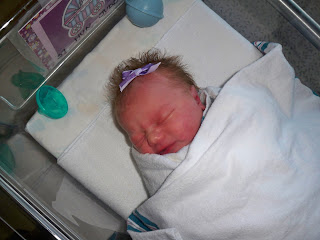 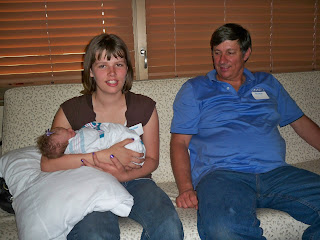 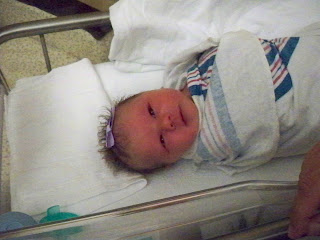 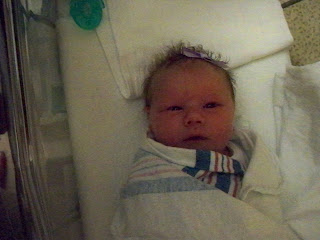 A special thanks to Lisa who was there and took all the pictures and "conveniently" didn't make it any of them (shame, shame, Lisa!!). She was also visited by her Aunt Natalie the next day but we forgot to take a picture! I'm so bummed about that! I know Grandma Hunter was dying to be there but she's been battling the flu for almost a week now. Kennedy can't wait to meet you!! The same goes for Dustin, Jason, and Hillary.

Alright, so "the story"...
As I mentioned earlier, I was not planning on being induced early. But, with my blood pressure problem and the fluid in my lungs, it was time. I can honestly say I have never been so terrified for anything in my life. I cried a lot on Sunday. We arrived at the hospital at 10:00 p.m. both just out of our minds with fear/excitement and we were both trying to hide it. We checked in and were escorted to my "suite" where I'd deliver. They had me change right away. However, while I was in the restroom changing, I heard the nurse tell Cory that I probably wouldn't deliver until Monday night because they technically wouldn't be "starting" me until the morning. I was trying so hard not to be pissed simply because I have made myself sick all day, now I had to wait all night, too. But it wasn't that bad. They gave me some medicine that I won't describe that was supposed to soften my cervix throughout the night then we were told to "get some rest." HA! Cory only had a little chair that slightly reclined to sleep in and I was worried sick. Around 2 a.m. Cory decided he was going to go home and sleep. I was sad, but he was keeping me awake with his tossing and turning and he really wasn't serving a purpose anyway. So he went home and the nurse brought me a sleeping pill. I was conked out and Cory was able to get some rest at home. Anyway, during my drugged up slumber I guess I started contracting but didn't know it. At about 5:30 a.m. they checked me but I was still only dilated at a 2. They started me on Pitocin a little after 6. That's the medicine that's supposed to start contractions and labor. Cory came back at about 7, and his timing was perfect because I started having mild contractions. The doctor came in at about 8:00 and broke my water. That wasn't very pleasant but it started the show on the road.

Around 9:30 the contractions started getting pretty bad. Our AWESOME nurse came and gave me some drugs to take the edge off. They worked for a while but then they started getting really bad again. I had to just close my eyes and concentrate on breathing and relaxing and nothing else. Finally, at 11:15 they came in with the epidural. I've heard a lot of people say this was the worst part. I didn't feel a thing! They numb you with something that is supposed to sting like a bee sting for about 30 seconds before they inject the needle but I didn't feel it at all. I was so glad to finally have some relief!! We waited around and at about 1-something (I forgot to write down times after the epidural...) I was only dilated at a 5 so Cory went home to shower real quick thinking I had lots of time. I fell asleep while he was gone. A little over an hour later, the nurse came to check me and I was at a 9 and she was all the way down in the birth canal. We were both very surprised! Cory showed up right at this time. The nurse went to go tell the doctor I would be ready soon and by the time she got back I was at a 10 and ready to push. However, there were some slight problems. Kennedy's heart rate would dip really low then jump back up again. They say that's normal to an extent but they wanted to try and fix it so they put me on oxygen and had me move around. Also, my epidural was working too well. I had no idea I was even having contractions so I couldn't tell when to push. The nurse turned it off in order to give me some feeling. I started pushing around 3:15, maybe 3:20. The nurse said she could see the head and asked Cory if he wanted to see. Cory doesn't do blood so he was so worried about passing out during this whole thing. But he was right by my side rubbing my back and being the best husband ever the whole time! After a couple of good pushes, they paged the doctor and he came in. In 3 pushes she was out! I've been told that first time babies take a lot longer so I was so excited she was fast. However, she had the cord wrapped around her neck so he had to rush her out and cut it. She wasn't blue or anything but Cory didn't get to cut the cord because of it, not that he really wanted to anyway :). The nurses all cooed about her hair and that it was a girl. Then my doctor looked at Cory and said, "That's what she was supposed to be, right?" haha it was funny. We both cried. It was just so amazing. It hurt, but it was incredible. Just like that, she was there. She cried a tiny bit when she first came out and made some whimper sounds while being cleaned up and measured but other than that she was totally content and peaceful. They cleaned her up and let Cory give her first bottle to her while they stitched and cleaned me up. Then I finally got to hold her. There were no words for that moment. It was amazing.

Later they moved me into the postpartum room and Cory got to go video tape her first bath. They brought back our baby girl all clean with her hair curled and a pink bow in her hair. She looked absolutely perfect. I wanted her to have hair SO BAD so I was so excited at all the dark hair she has. Anyway, the rest is history and chock full of info no one wants to read about so I'll skip a lot of stuff. We had family come from about 7-9 p.m. and then we reluctantly sent her away to the nursery to get some sleep for the night. I had dreams about her all night, but both Cory and I slept so deep. Even with nurses checking on me and bugging me every 3 hours. I finally requested a Lortab for the pain around 4 a.m. and after that I don't remember a thing. We spent the whole day Tuesday in the hospital. We could have sent her to the nursery again Tuesday night but at this point I didn't want to leave her and we figured we needed to get used to being woken up all the time sooner or later. We didn't sleep very well at all but that's all part of the new life we now have. We started getting ready to leave around 8:00 a.m. and finally made it out around 11. I was so very ready to leave and be home. She's been out like a light all day pretty much. I think that means we're in for another sleepless night but at least we're home and she'll be the only thing waking us up instead of nurses and noises. And we get our own bed!! I'm feeling pretty ok. I think I'd feel better if it wasn't for this stupid cough. My lungs are trying to work out all the fluid but it hurts really bad to cough so I can't get good, deep coughs in. But we're doing well and are looking forward to this time.

There are no words to describe how we feel. We love her so much. It's going to be a scary and fun and it's so new having this little person who depends entirely on us to take care of her. She's such a sweetheart. She's a major snuggler and  hates being unwrapped. She doesn't get very upset when she's hungry and she's been eating so well! The doctor says she looks healthy and perfect so far. We just keep staring at her in awe and wonder. I've cried several times just looking at her because she's our little miracle. I get so scared that something will happen to her. Everyone says "you can't imagine your life with them." Cliche, but true. We have a little girl and we love her more than words can describe. I'm amazed the Lord trusts us enough with this sweet spirit. She's ours forever!! We love you, Kennedy!
Posted by Megan and Cory at 8:26 PM

Megan, I'm an old old old friend of Cory's, and when I saw photos of him on FB with a little babe, I found your blog to see more. It's always so exciting when friends have babies!!

Congrats on little K, and best wishes. It can be tough when they first arrive. It's been almost a year since my daughter was born, and I'm still recovering!

I can see Cory in her now. I love that she is a little burrito baby. She's absolutely beautiful, I can't wait to meet her. Hope you get feeling better soon. You're amazing!

Isn't it incredible? You created a life! And a very cute one at that:) I am so impressed you only had to push 3 times. I pushed for 2 hrs! Can't wait to meet her:)

Thank you for sharing the photos and birth story and your feelings as a new mommy. Congratulations! :)