A lot has happened that I feel we should update our online life with. First off, we had our detailed ultrasound yesterday. It's the one where you have to drink lots of water an hour before and you're very uncomfortable. But, it was worth it. We confirmed that we are having a girl and got some cute pictures that I don't have to label because the tech already did it: 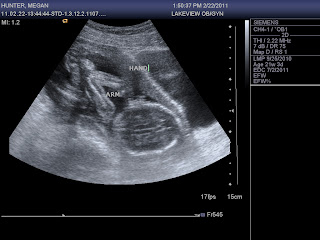 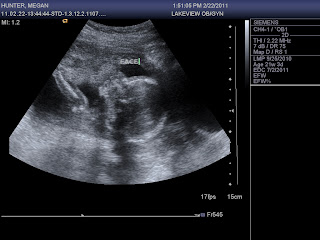 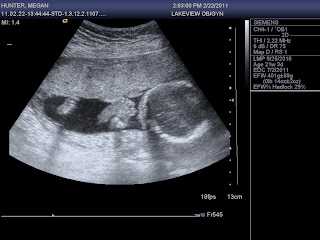 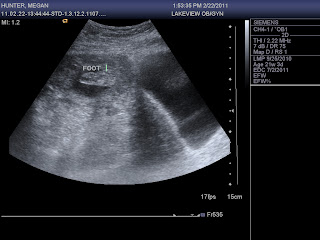 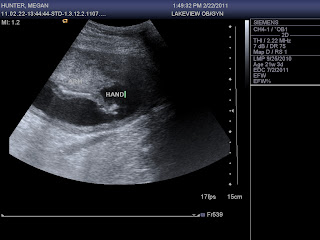 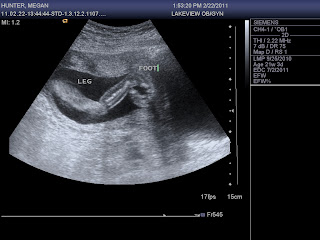 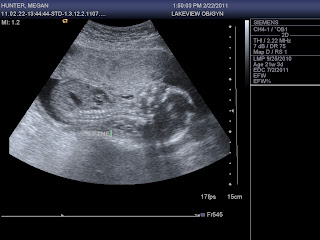 Normally a black and white blob of bones and organs would be freaky, but we think she's so darn adorable! The tech measured her head and said that I'm only 20 weeks and 5 days along (as of yesterday) and that my due date should be pushed to July 7th. I did the math on that and I know she's the doctor, but 40 weeks back from that date doesn't biologically match up so I'm thinking she's just a small baby, which I have no complaints with. Obviously she'll come when she's ready, but I'm just going to pretend my due date is still the 2nd. We also discovered she's just like me because after a while of prodding and poking, she started getting annoyed apparently because she'd punch me wherever the wand was. It was hilarious! It's amazing that she's only about 20 weeks old and already has a personality! I hate being bugged when I'm comfortable, too! But then again, so does Cory. I can't wait to meet our baby girl!

We picked up the crib yesterday. Of course we can't set it up until we move, but I'm very excited for it none the less.

We also bought a washer and dryer on President's Day for the house and got a screaming deal! We're so excited to use them! And while at RCWilley we looked at carpet and yesterday we took some samples to the house to see which one looks best. We've picked our color and hopefully they can come measure the house on Saturday and get it ordered and ready for installation the weekend after we close, which is on St. Patrick's Day. It's been SO MUCH FUN!! It'll be even better when we're all moved in and everything is just the way we want it. Granted, that's all subject to inspection and whatnot. Right now we don't foresee any obstacles, but I guess we should keep that as a possibility. I sure hope not though! Keep your fingers crossed for us!

That's about all that's been happening so far. We're doing really well and feel so blessed!
Posted by Megan and Cory at 6:11 PM

Yay!! How amazing to see the little person inside you. She's going to be super spunky and awesome, just like her mom. :)

Cute, cute! And just think: come moving time, you won't have to do much because... you're preggars!!

Even when you are quite good at using internet or email, you may have problems with it. Some problems are quite common and you can solve it (forgot password, forgot username...) but sometimes, because of the high secure policy of Google, proxy problems... you may cannot sign in your email. If you cannot solve it yourself, gmail email login will be a helpful choice.