Back in the day, my roommates introduced me to a little show called: 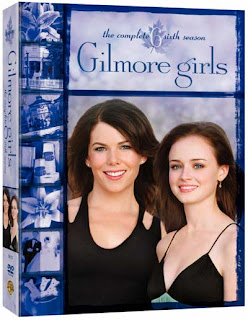 We used to have Gilmore Girl's nights and when we were bored we'd watch old seasons. They were great times. It's since been off the air and I've forgotten about it until the other day when I was watching TV and saw that it was on. I instantly told the DVR to start recording it and I ordered the first two seasons for myself. It has taken up my spare time since. I love the show and it helps me remember a very important thing and that is how much I value my relationship with my mother. We're a lot like Lorelai and Rory. We're exactly the same and my mom has always been my best friend. I was conflicted after I met Cory because I felt like I was cheating on my mom in a way. I still call her about everything, even when I'm just bored and don't have much to say. I'm lucky that we have such a close relationship and that I can trust my mom with things in my life. She's the best!

In other news, I can't wait to find out what we're having this week!! I'm going to be really upset if we can't get a good look. I'm also accepting the idea of a girl more and more but I have no idea what to name her. I can't find a single name I like enough to name my child that. I'm not a fan of names that start with a "K" because everyone is naming their babies with "K" names, I hate trendy names and names that try so hard to be different they're just weird, we don't like old fashioned names either so... it's going to be tough. We're taking suggestions but don't get offended if we don't use it haha. I also attempted to take a "belly" picture the other day and I have one where you can hardly tell and one where I just look like I've gained a million pounds or so instead of being pregnant (kidding). Turns out it's not easy to take a decent "look-how-fat-I'm-getting" picture. So, I opted for the one where you can hardly tell. 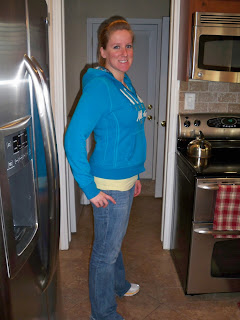 I promise where the hoodie pokes out, there's a little bump. I'll try for another one later but that'll have to do for now. I can't wait to be a mom! I never, in my life, thought those words would come out of my mouth. I've never relished the idea of motherhood and I've never been baby-hungry. I'm 26 years old though and I'm not getting any younger so we knew it was time to face the music and I'm glad it's turning out to be pleasant. I've never hated the thought of being a mom, but I wanted to live my life as much as I could before we changed it forever. Anyway, it's time for that change and I'm more excited than I expected. I know the timing is perfect for us. We'll keep everyone posted on whether it's a boy or girl when we find out!
Posted by Megan and Cory at 5:15 PM

Megan! Congratulations! I had no idea... mostly because I've been out of the blogging world for quite some time. I think it's way cool you are pregnant. I truly love motherhood! It is a HUGE life change and isn't at all what I expected. Some days are so hard and other days are so perfect- all days are worth it though. I agree that names are extremely hard. For a girl we liked Reese (since that's my maiden name), uh I can't remember other ones. ha ha. For boys we liked (other than Beckham) Jace, Blake, uh I can't remember any others now. ha ha. I still love the name Jace. I heard the name Emerson (for a girl) the other day and I thought that was pretty cute. If I think of more I"ll tell you. Anyway, congrats you two!

Seriously? You were cheating on me? I didn't know! And I thought I was just getting another awesome son when you married Cory!

I love it! Can't wait to hear what you're having!!

FYI- I have the 6th season of Gilmore Girls. I think my roommates & I started watching it about the 4th or 5th season. You're welcome to take it anytime. I've always loved the names Kesley (again a "K" name), & Abigail (we would call her Abby). But if you use those names, what will I call my girls??