Swing For the Fence 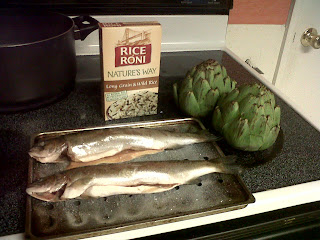 I figured I'd better try being a better wife and actually make a decent meal instead of Papa Johns or spaghetti. As long as I'm trying, I'd better swing for the fence. This is tonight's proposed dinner. 3 things I love. I've cooked fresh trout before and I can make Rice-a-Roni blindfolded (so not kidding) but the artichokes are a whole different story. I might as well be catching a greased pig. After some google research and several "how to" video's I feel like I can do it. I didn't even know how to pick them out so if they're terrible, I'll blame it on the produce guy who stood and watched me instead of asking if he could help. Maybe I picked good ones? Or maybe he just hates his job. Alright, water is boiling. In the pot we go!!
Sent via BlackBerry from T-Mobile
Posted by Megan and Cory at 5:01 PM

Mmmm...that looks like a delicious dinner! I hope those artichokes turned out nicely for you. :)