Well, ever since I announced that we were stressed out I've received an increase in the amount of "Are you pregnant?" questions. No, this problem wasn't kid related. At least not really. When we are pregnant, I won't be posting that we're depressed and stressed out about it... because we won't be. Just wanted to clear that up...

So here's the scoop. I told everyone in January that Cory was chosen to receive the Kennecott scholarship at SLCC which paid for his school and provided a high paying job for him when he graduated. We were thrilled. We knew the job wasn't set in stone, but knew it was a good chance. Cory has talked about applying for this and about working at Kennecott for a couple years now, so it was something he REALLY wanted. Anyway, things were hunky dory when out of the blue he gets a call from Kennecott saying they have lots of scholarship winners and they're trying to decide who to give the job in the summer to. We didn't know there was anyone but him. They asked him some questions about when he could start and they wanted this semesters grades as soon as he could get them. We were pretty upset about it because we had our hopes up. Then there was another scare with how many credit hours he was taking. We started to get really discouraged and we doubted that he'd get the job. All of our future plans were resting on this job. We knew that if he didn't get it, he could always find work elsewhere but it wouldn't pay as much and our plans would have to change. We wanted to travel before we have kids, we were going to start saving for a home, paying off a couple things to be debt free, fixing the Jetta (shudder), starting a family, and buying a couple things we've been needing. That all seemed unreachable. We prayed our hearts out and attended the temple and kept up our end of the deal with the Lord. If we wanted Him to help us, we needed to keep doing our part. We were always given the feeling that we'd be ok, we were still just totally stressed and worried about it. Obviously, we really wanted him to get it.

Anyway, to make a long story short, Cory received a call from them Friday that they wanted him and asked when he could start. So friends and family, HE GOT THE JOB!!! I think we were both in total shock. He told me through text message since he was at work at the time. I sat down and just cried and literally prayed to the Lord thanking him for blessing us. We're so happy! What a huge stress taken off! He should start at the beginning of May since there's only 3 more weeks of school (YES!!) and then he'll be a career man. I am so proud of him. And I really appreciated the excitement and happiness you shared with us when you heard the news, if you were one of the few who heard in person. We're really excited. This job will change a lot of things for us, for the better. I feel so humbled that we have been so blessed. So in a few weeks, my husband will be surrounded with these: 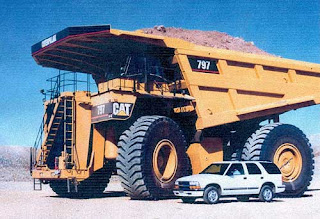 Congratulations again to Cory!! I love the new picture as well. You guys look great in red rock! Pretty much on top of the world, eh?

Megan - I am SO happy for you guys. You totally deserve it. Congrats to Cory!

Wow, those trucks are enormous!!! I am so happy for you guys that Cory got that awesome job and that you can continue on the path that you have planned out for your family. :)