No Backing Out Now... 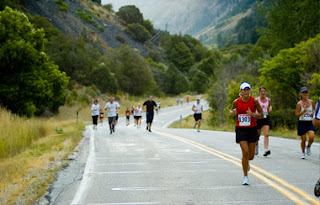 In January for my New Year's resolutions, I said I wanted to accomplish something great this year. I wasn't sure what. I must not have been terribly committed because I forgot about it until the Olympics started in February. After watching that, I got all fired up again and really, really wanted to work towards something awesome. I thought about what to do, and I knew I wanted it to be something athletic since that's what I enjoy most. I also thought since running was something anyone could do, I might try something associated with that. Well, I've always hated running more than most things on this planet. It was torture for me. Tory, my sister in law, has always been a really great runner. She started up a few months ago and kept trying to convince me to keep it up. I've never ran farther than 3 miles before without stopping to walk. So, my initial goal was to just get fast at running 5k's and hopefully place in the top three at an event this year. I started running and had a really hard time with it. I wasn't motivated and it just seemed... I don't know. Then, one day, I was feeling awesome and had tons of  energy. I went out running and ended up going 5 miles without stopping. I felt like I could fly!! I wasn't even sore and I didn't feel like death after running either.

That day was important to me because I finally broke through my mental barrier and was able to realize that I had much more in me than I knew. I could actually start doing it. And loving it! So, it's become something I've loved. Tory ran the Salt Lake Half Marathon almost 2 weeks ago. Watching her, as well as all the other athletes was really inspiring. I knew when I saw them pumping across the finish line that I wanted to accomplish that this year. I wanted to run a half marathon. So, I started searching for marathons in the summer that I could potentially do. I wanted to give myself plenty of time so I could be ready enough that I wasn't the last one across the finish line. I decided to shoot for the Top of Utah Half Marathon in Logan in August. I mapped out my training program and have been keeping up on it pretty well. The only setback is the stupid weather. I am really excited but I had this nagging feeling that I might let something talk to me out of it in the future. So, I decided to remedy that situation. About 20 minutes ago, I registered for the race. There's no backing out now... I feel totally freaked out and yet really excited. I never thought I'd be doing this. I know this may not seem like a grand goal to a lot of people. But it's a big deal to me. I'm finally going to achieve something great!! And thank you, Tory, for believing I could do it and helping me get into it more. Hopefully you've helped me into something I can continue to get better at. Here we go, time for training!! ah!!! :)
Posted by Megan and Cory at 7:05 PM

I really am excited for you! There is just something addicting about running, and it just makes you feel so strong.

That is such a great goal! You will do awesome - I'm so excited for you!