It's that time of year again!! Easter Jeep Safari time!! Here are the details and WAY too many picture of our adventures this past week:

Cory and I planned on leaving by 11 but that didn't end up happening. We arrived in Moab around 5 and found our hotel. It was a cute little place. It was older and had that musty smell, and the bed was like sleeping on cardboard. But it was worth the price and we were grateful we didn't have to worry about being cold. We settled in and went to Pasta Jay's for dinner. Then we drove up to Potato Salad but it was closed by the time we got to it. So, we went back to the hotel, watched some TV and went to sleep.

We woke up late and had our breakfast then needed to find something to kill the time until Dustin and David came down. So, we went back to Potato Salad. This was the crowd there at 11 in the morning: 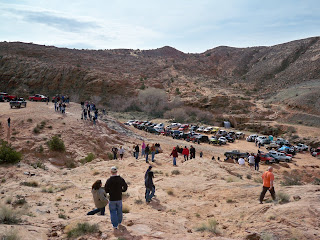 For those who don't know, Potato Salad is a popular Jeeping obstacle that used to be really really hard to get up. You could see a rollover every half hour. Apparently it's gotten easier over the years because jeeps and trucks were just walking right over it and we got bored quickly. We met up with Dustin and David and decided to go try out Cliffhanger. Sadly, we discovered the Cliffhanger trail, along with almost every other trail in the area, was closed because they were reserved for the Jeep Safari participants. We were mad. The only trail open that day was Pritchett Canyon, the hardest rated trail in Moab (other than area BFE). We decided to at least go check it out and see how much of it we could do. While airing down, we met some cool guys from Washington who own their own custom fabrication shop and were down showing off their jeep to get clients at the safari. They told us the trail was pretty hairy but they'd go on it with us for as far as we could manage. At the beginning of the trail is this warning sign: 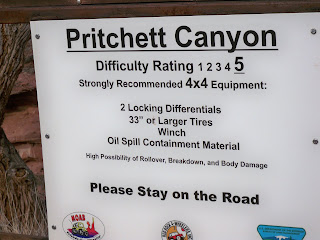 The smaller print says "high possibility of rollover, breakdown, and body damage". We're used to tough trails but we were feeling a little uneasy about what we might encounter. Anyway, we began the trail. It was difficult, but nothing Cory and David couldn't handle. 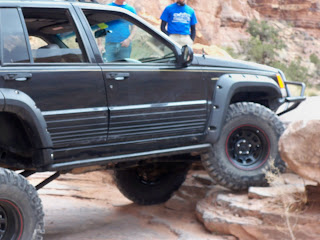 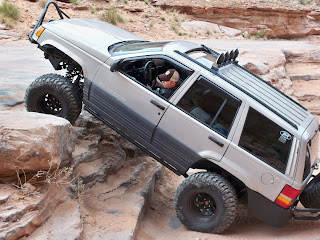 The trail got a little tippy and Dustin had to ride on David's rock rail to prevent a rollover. 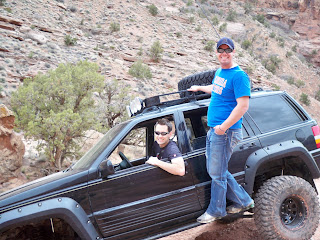 We went a little way into the canyon and turned a corner and saw this: 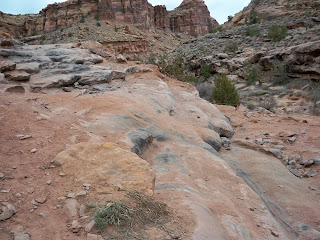 Now of course, pictures NEVER do justice to what the scene is really like. This is a HUGE obstacle that is extremely difficult. The upper part is so tippy and challenging that most people use a winch to get up safely. Otherwise you tip over and roll multiple times down this ravine. And this wasn't even the hardest part of the trail!! There was a sign that said much harder obstacles to come. Coming down is the really dangerous part. We watched a group descend it. One guy had an old 70's Cherokee that had a lift and tires, but that was it. No winch, no roll cage... nothing. He started down and dropped his front drivers-side tire off one of the ledges and his back end went over. He was about to roll until some guys grabbed his rear bumper just in time. He was LUCKY!! But the worst part was he had 3 young boys in the back while all this was going on. If they had gone over, they would have been seriously injured and most likely killed if they weren't wearing seat belts. What an idiot!! Anyway, we watched the action for a while then decided to turn around. We said goodbye to our new friends and went back the way we came. After the trail we went and got some pizza then went and did Fins and Things in the dark. That was fun. I am getting a little sick of that trail though. We do it too much. After that we headed to bed and tried to rest up for another fun day.

We woke up and found out that the safari wasn't doing trails that day so we could go try the cliffhanger trail. Here's the sign at the beginning. I thought it was cool. 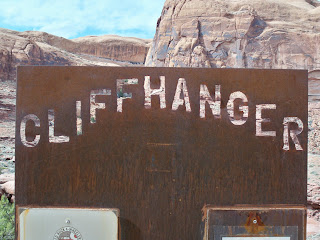 This trail wastes no time getting down to business. And I'll tell ya, it gets it's name for a reason. Here is the very beginning of the trail. 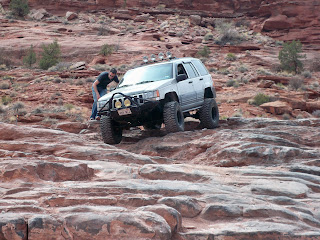 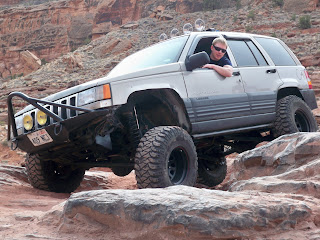 Cory needed assistance to keep from pitching. He probably wouldn't have gone over, but better safe than sorry. 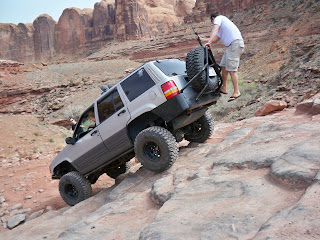 After the boys ventured down this, there was a 4 foot ledge to drop down. Thankfully it had a side way that was still challenging but wouldn't take their bumpers off. It made for some sweet pictures. 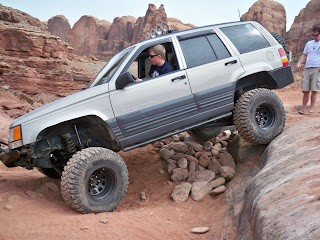 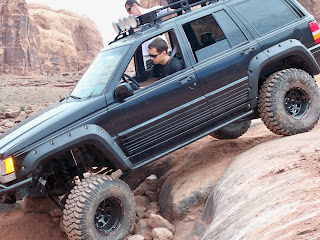 The trail wound it's way up a canyon and hugged cliff edges frequently. We were almost to the end when we came upon this: 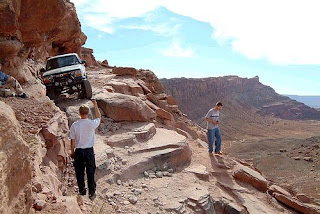 It's an enormous drop that's on a narrow ledge. The cliff to the right is a 400 foot drop. If the driver side tire dropped first, you'd roll off the cliff. We were told it looks worse than it is, but given the good probability of danger, we decided to play it safe and turn around. Being that close to the cliff edge actually made me sick. Anyway, right before this part was an overlook to the Colorado River 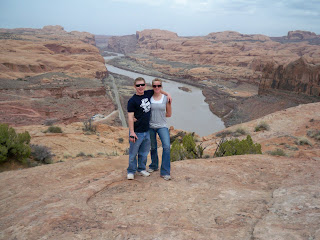 I have a funnier version of this picture but you'll have to see Facebook for that. We had a great time although due to my fear of heights, we may not try that trail again for a while. It made Cory uneasy, too.
After the trail Dustin and David had to go home. We repaired Collin's Jeep (he was supposed to do the trail with us but his alternator went out right after he aired down so we had to abandon it and fix it later) and decided to head up to Canyonlands and stay with my parents. We didn't feel like finding our own campsite for the night.

The wind was blowing in the huge storm this day and the gusts were really strong. We decided to go check out some of the stuff inside the actual Canyonlands park. We saw a cool overlook: 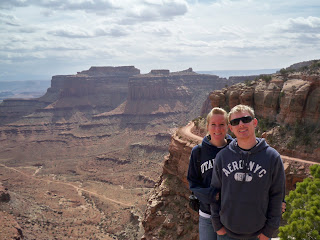 Took the small hike to see Mesa Arch, which was way cool. 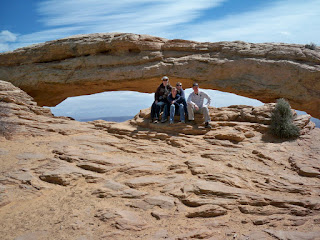 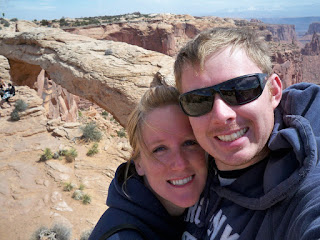 and we also went to a place called upheaval dome. It was fun and we all came back with sunburned faces, despite freezing in the wind. Monday night the storm really hit and we had wind gusts up to 60 mph at the campsite. Everyone else went and watched a movie in the Marda's trailer but Cory and I decided to just hit the hay early.

Since it was freezing and the wind was still blowing, the group decided dirt roads would be the best bet. We first went to see Fischer Towers. From the road it looked totally lame and I wasn't sure what made it so special. Well, it's a hike that takes you to the base of these MASSIVE towers that are sticking up out of nowhere. They had the funkiest shapes and seriously were enormous. The tallest one was 900 feet high. The hike itself was really cool too, lost of rocks and things to climb over. 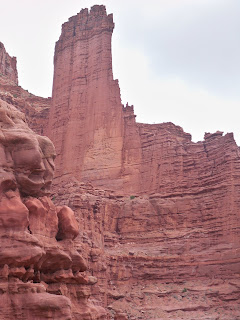 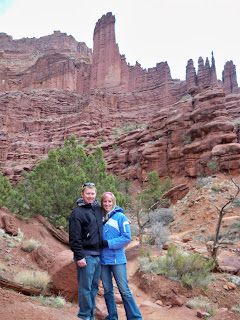 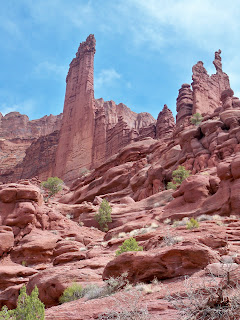 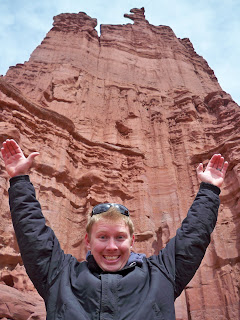 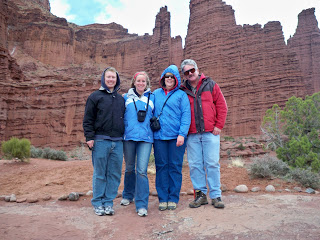 We are definitely going back! What a cool spot! And hopefully it'll be warmer and less windy on our return trip.

Next we all took the Onion Creek road. It's a road that winds through this canyon 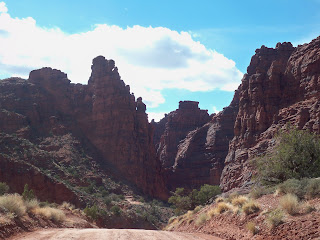 And dwarfs you as you're sandwiched between towering rock cliffs. You also cross the Onion Creek 22 times. It was really awesome. They even have camping sites in the canyon so we decided we need to go back down and camp in there as a family, I can't believe we've never explored that area of Moab before. It was literally breathtaking.

Cory had to work today so we woke up early and headed home. We were both super bummed to be leaving, but at least we got to go. We always have a great time camping!!

(p.s. If there are typo's in this, please disregard them. I was too lazy to go back and re-read the whole thing and check...)
Posted by Megan and Cory at 6:26 PM

Those are awesome pics. We'll need to definately go back so I can see some of that stuff. I wish I could've stayed, but it did look a little cold. :)

I told you guys not to rub in it:) Cool pics. Wish we could have come. Next time for sure! Looks like I need some vehicle mods to keep up with you guys now. (Tyler)

Sorry you had to come back to SLC. Looks like it was an awesome trip!

Very fun! It's been forever since I've been camping and those trails looked like a lot of fun. :)