Well, we're back from Moab. And WHAT A VACATION!!! It was so awesome. The weather was perfect, about 65 degrees the whole time. We had a campsite all to ourselves so we didn't have an noisy neighbors or generators to listen to. Cory and I arrived down there at about 6 pm on Wednesday. I was still feeling pretty sick so we cooked Spaghettios over an open fire, waited for the Schears and my family to arrive then headed straight for bed. Thursday morning we woke up and did a few 4x4 trails. First was Fins and Things. Mandie's boyfriend Chase came with us in his 4-runner and he was a newbie so we had to break him in. He did really well. Cory even let me drive some of the really cool parts. Then we went and did some of Porcupine Rim, but we didn't get too far because the sun was starting to set. We did however get to an awesome overlook just in time for the sun to start setting and light up the red rocks. It was awesome!! Friday I FINALLY started feeling better so it made the day even better. We drove down to Canyonlands and did Elephant Hill. We've been on this trail tons of times but the Schears hadn't. Once you get back behind the actual hill, there is a gorgeous spot called Devils Kitchen that has some really fun rock climbing and mini slot canyons. Cory let me drive on the way back out of the trail. It was loads of fun. I'm usually spotting so driving was...awesome. Saturday, the Schears had to leave so we decided to try a harder trail since Cory's and Collin's Jeeps are more equipped. We went and did Poison Spider Mesa. We did this one last year but didn't get to finish it. I highly recommend this trail. The trail takes you to an arch and a little farther takes you to a breathtaking view of all of Moab. At the arch, we stopped and had lunch. Cory and I were sitting on some rocks when I spotting something coming at me out of the corner of my eye - it was a poison spider!!! I actually don't know if it was really poisonous, but if you're familiar with the area and with the brand Poison Spider, their logo has a spider that looked EXACTLY like the one coming at me. So who knows... After spending some time on this trail we started to head back. At about 3/4 of the way down the trail, a group caught up with us at an obstacle called the Waterfall. We stopped and watched them because the first jeep down the waterfall came VERY close to rolling, so we decided we wanted in on the action. Well, they all made it down safely. We kept going with them at our rear. Towards the end, we noticed the group had stopped at a particularly hard ledge. The first Jeep in their line looked broken down. Sure enough, the kid driving had popped out a spring. They didn't have a high lift so we went back to help them. Anyway, it turns out these people were from Syracuse and they came down to Moab with a family that Cory knows pretty well - he was on the dive team with them in High School. It's such a small world sometimes. After that trail we went shopping in town then ate dinner. Sunday we came home. It was a fantastic trip, one I know I really needed. Sorry for the picture overload, I actually have about a million more, but I'll post them on picasaweb tomorrow for those that want to see more. I'm too tired tonight. It was so much fun. Enjoy the pics! 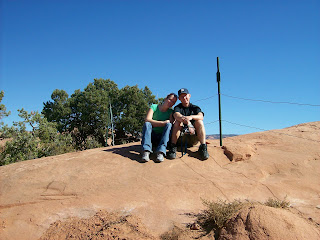 Us on the trail 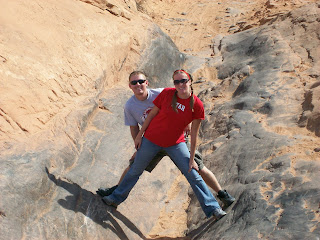 Us standing in "the Wedgie" on Poison Spider Mesa 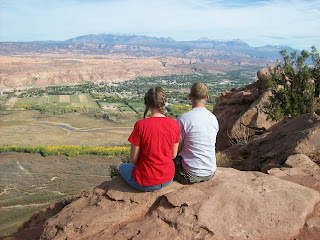 looking at the view of Moab 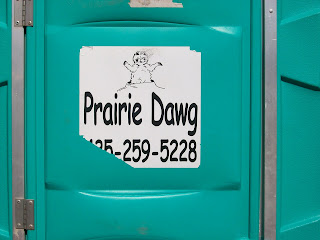 HAHAHAHA This was our porta potty at our campsite. I LOVE the name! 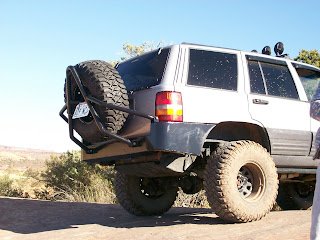 This is the rear bumper Cory built. Looks awesome huh? Oh and he did the tire carrier too. 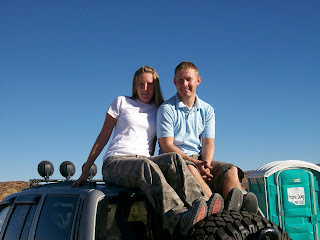 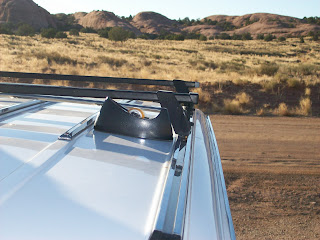 So the morning after Collin and my family arrived, we noticed something on Collin's Jeep. He had been working on his Jeep moments before they left and had left this tape dispenser on the roof. It made it the whole way to moab. 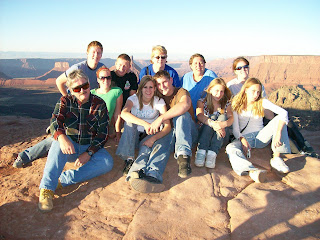 Us happy campers. Dwane is taking the picture. 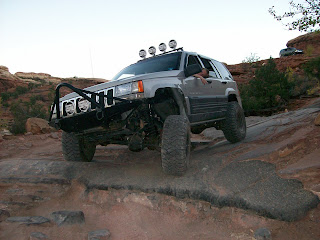 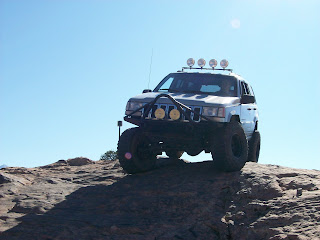 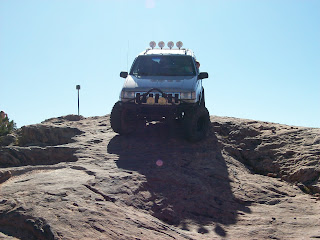 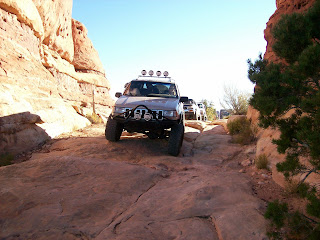 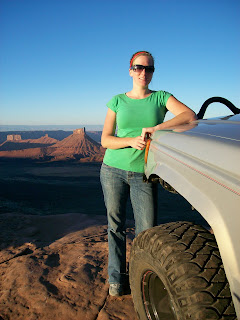 Dwane took this one, I thought it was cool. 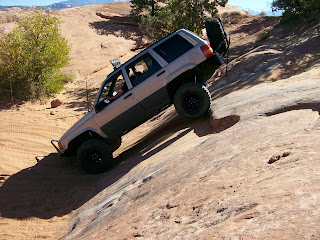 Cory on Fins and Things 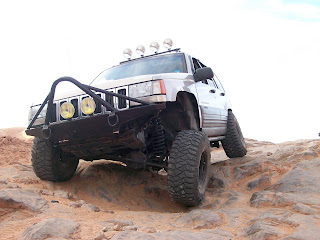 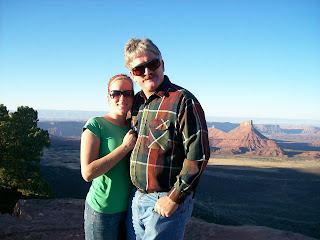 Me and my daddy 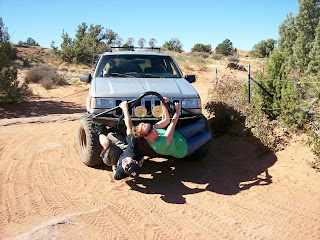 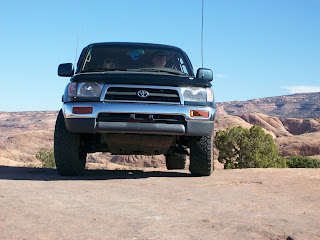 Mandie and Chase. Their faces make me laugh! 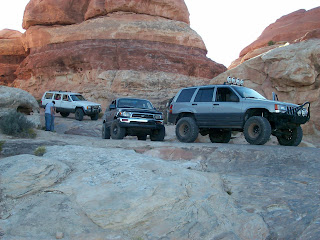 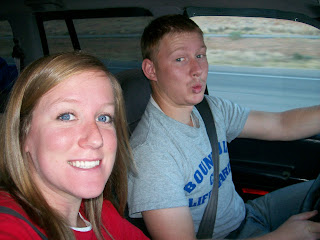 This is when we pulled into Moab Wednesday night. We were so excited!! 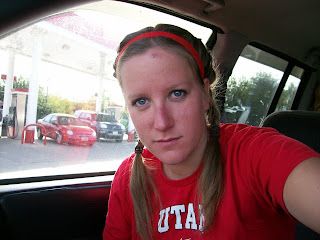 Okay, so this picture is aweful! But notice the bump on my head. I wasn't being very vigilant while rock climbing and I smacked it on a cliff ledge. Ouch. 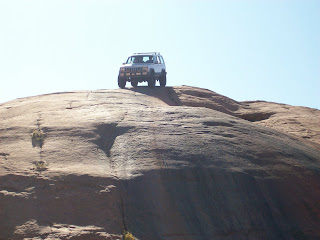 Collin on Baby Lions Back 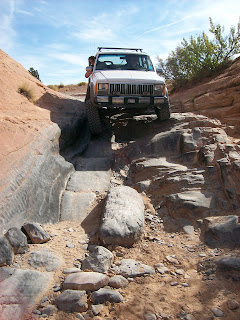 Collin on Poison Spider Mesa.
Posted by Megan and Cory at 8:56 PM

That looks like so much fun! Way too scary for me though. :) Poor little bump on your head. Sad day. It sure sounds like you had a good time. Oh and the bumper. (as if I know anything) looks great!

Awesome you guys!! So what do you have to do to your vehicle to get that sexy flex thing to happen?

Looks like a blast. Wish we could've been there. Tyler says, "next year, get ready to rock!"