I Wanna Pet the Kitty!

Well, tomorrow is Halloween - and there is no school. I was little bumbed because I love seeing the kids in their costumes. But the first grade decided that today we would have a "character dress up day" where they can dress up as a character in their curriculum. On the list was Puss in Boots. My original costume came with pink fuzzy boots, which I am crazy about by the way, so I decided to do my own "pink" version of puss in boots. However, I forgot to buy a hat and a cape so I just ended up being a cat. I found an awesome addition to the ensemble at a ghetto costume shop in Taylorsville, which gave me a furry head and hands. Now, only the first grade was dressing up, so it was kind of a shock to the rest of the school to see a pink fuzzy "cotton-candy" like cat walking down the hall. I got a lot of laughs and high-fives and "you like AWEEESSSOOMME!" yells. I am now formally known as Mrs. Pussy Cat. But I think my favorite thing was when I'd see the kindergarten. When they saw me, they would whisper and point "look at the kitty!" with a really excited voice. At the end of the day I heard one of the kindergartners ask her teacher where the kitty was... then she saw me and got all excited. It was hilarious. I generally get pretty embarrassed over stuff like this, but after a while I just told myself I needed to have fun with it. I'm glad I did. I decided to wear it to our Fall Festival/ Carnival tonight because I've set a standard for myself now and my other costume sucks haha. Anyway, it was pretty funny and I wanted to show you what all the fuss was about. Although I think most of the hype was over the fact that we got to dress up and none of the other grade did. Gotta love first grade :) 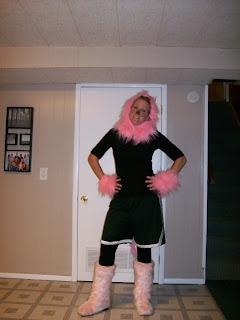 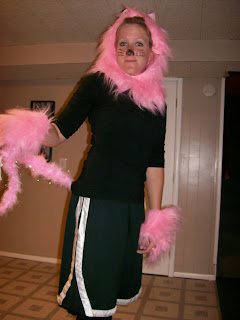 That is awesome! Halloween is the best.

What a cute kitty you make!! Dressing up is so fun, especially when there are little kids around to appreciate it so much. :)

Megan! I loved you costume! I am glad you dressed up because I would have felt really dumb if I was the only one! You're great! Love ya!

Hilarious. You look awesome. I totally would have adored you as a little child, just like that kindergartener.